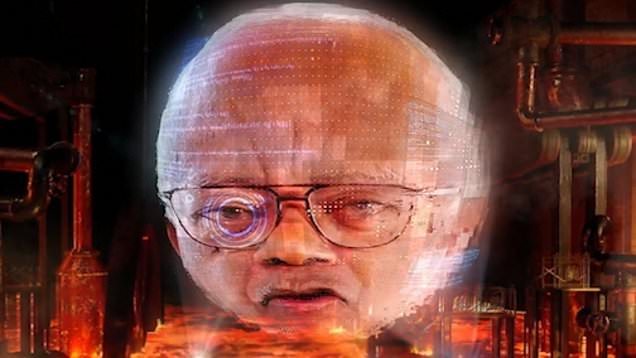 A reader is convinced is that not only was the old 90s GamesMaster a bad TV show but so too is the recent revival on E4.

Can we be honest and admit that GamesMaster was never a good show?

The only reason we gamers watched it is because we were starved of video game news and reviews beyond a monthly magazine. At the time, for console gamers, demos where nothing but a pipe dream. If we were lucky, the best we got was a VHS cassette taped to the front of a gaming mag, previewing some up-and-coming titles, but these were few and far between.

And so we fed on the scraps given to us, even feasting on the risible Bad Influence, like a dog chewing on a dry bit of chicken that’s fallen on the floor.

What we wanted was a show that treated gamers with respect. A game version of the BBC’s popular Film would have been a good template, with news features, previews, and developer insights. Instead, what we got was B-list celebs and members of the public furiously waggling their joysticks to pointless challenges, whilst uninterested host Dominik Diamond doubled down on the euphemisms and the late great Sir Patrick Moore presided over the proceedings, clearly unaware of what on earth was going on.

Back in the early 90s, being a gamer carried a stigma that you were a basement dwelling nerd with no social skills and where probably a virgin. GamesMaster did nothing to help change that attitude and it wasn’t really until the PlayStation era that things began to shift, and gaming became a more acceptable hobby to the mainstream. Now, of course, gaming is mostly not seen in quite the same negative light, but it still struggles to free itself of those old stereotypes.

And then the new GamesMaster series comes out and manages to set the image of gaming back 30 years, as well as somehow managing be much worse than the original show, and that includes the infamously bad season 3.

‘Let’s get sweaty’, is the catchphrase of bargain basement Dominik Diamond wannabe Robert Florence before each challenge, because, you know, that’s what happens when we play video games. We get sweaty. Yes, sweaty basement dwelling nerds with poor hygiene.

But anyway, maybe the new challengers on the show will help to us seem a bit less geeky. So let’s take a look at some of those the producers decided to offer up as a fair representation on modern gamers.

Early on we are introduced to Sam Tuff, an apparent gaming legend who, donning an Oculus Quest 2 (or whatever it’s called now), swings his arm wildly about in his living room, his dad staring blankly upon his son with a look that says he just died inside. How proud he must be to see his little cherub prance around in a virtual headset on national television.

Not a good start then, but it gets worse. We then meet two grown men, brothers who have dedicated 10 years of their life to playing Mortal Kombat, who call themselves, wait for it…Ketchup and Mustard. Yes, you read that right. Ketchup and Mustard. And they even wore red and yellow jackets, strutting around the studio as if they were about to enter a heavyweight prize fight.

At this point I was glad I had decided to watch the show on my own, as if the missus had seen what I watching she probably would have confiscated my PlayStation 4. In the next episode we get a girl gamer who wears obligatory cat ears for no apparent reason, because clearly all girl gamers wear cat ears.

In the last episode we got bottom of the barrel ‘celeb’, self-titled (and probably self-entitled) Elz the Witch (you can’t make this stuff up), who’s only claim to fame seems to be not wearing much on her Instagram. But at least she proved a bit of 90s style titillation for us sweaty virgins right?

Challenges aside, the new GamesMaster completely fails as an entertainment show with its ‘news’ sections and attempts at comedy sketches. The whole ‘Educating Grado’ section is utterly, pointlessly bad, and nobody should use their fingers as a way to rate a game.

The most cringe inducing moment was the pitiful attempt to bring attention to the apparent over sexualisation of female characters in video games, in comparison to their male counterparts, by comparing the outfits of Quiet from Metal Gear to the armour of a Big Daddy from BioShock and a soldier in a ghillie suit.

Aside from making the error of assuming that only male soldiers could be in a ghillie suit, Big Daddies are neither male nor female (as far as I understand) but why such contrasting outfits anyway? How about comparing Kratos, who walks around with his top off, showing his oversized muscles or any number of male characters that could be considered oversexualized or having impossible to obtain physics?

So the new GamesMaster is bad. The presenters seem mostly out of their depth, the comedy isn’t funny, and gamers are once again made to look like sweaty geeks.

The only saving grace is Sir Trevor McDonald, who, like Sir Patrick before, clearly has no idea what he is talking about, which makes his absurdist one-liners even funnier.

Other than that though, this series needs to be confined to its own fiery pit once and for all.

(And yes, I see the irony of having a gamertag of RealxedChimp, compared to Ketchup and Mustard, but I wouldn’t call myself that on nation television!)

All Of The Superheroes In Fortnite

Got $1500 To Spare? Then You Should Probably Buy This Massive Geralt Statue