In 2018, the internet giant revealed plans for its Dunant cable. It’s one of more than a dozen projects Google has backed over the past decade as it doubles down on infrastructure investments to power its cloud computing services, such as storage, analytics, machine learning, video-streaming, email, and various enterprise offerings.

Dunant spans 6,400km (3,977 miles) from Virginia Beach in the U.S. to Saint-Hilaire-de-Riez, France and comes almost two years after Google launched its first self-funded subsea cable. Curie went into operation in April 2019 and stretches 10,000km from Los Angeles down the Pacific coast to Chile.

When Google announced Dunant in 2018, the internet giant said it expected to finish the project in late 2020, so it has missed its target by only a few months. 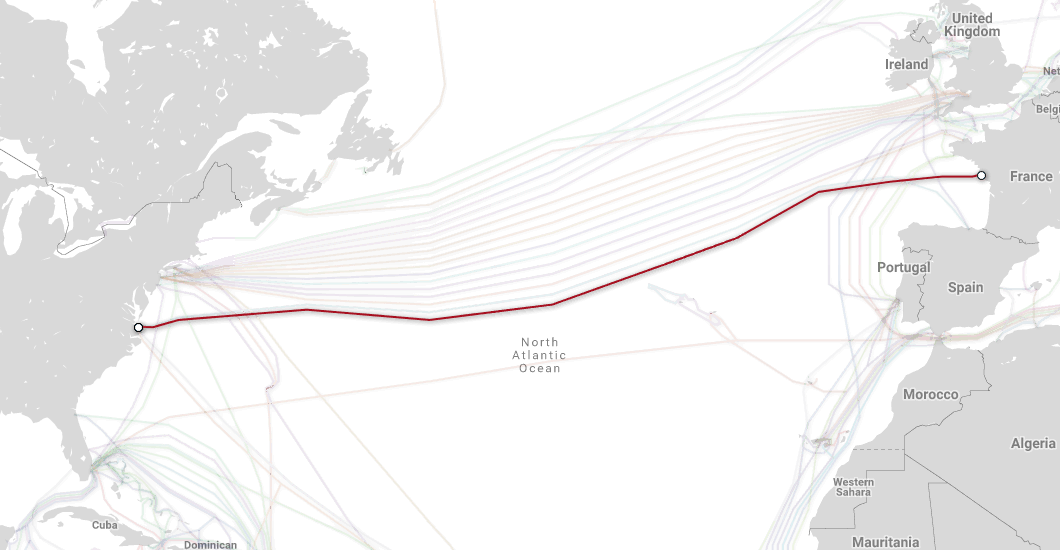 Above: The Dunant cable is expected to be complete in late 2020. It’s owned entirely by Google.

Google’s growing infrastructure investments fit into a much wider trend, with most of the big technology companies investing in subsea cables and satellites, among other moonshot projects. Google sibling Loon set out to deliver internet to hard-to-reach places through a network of high-flying solar-powered balloons, but Alphabet killed that project just a few weeks ago.

Dunant is actually reminiscent of another subsea cable that was funded by Microsoft and Facebook — the 4,000-mile transatlantic Marea internet cable that went into operation in 2017 and runs from Virginia Beach to Bilbao on Spain’s northern coast.

While satellites and similar technologies will play an increasingly big role in beaming internet to the farthest reaches of the Earth, physical cables splayed across ocean floors offer much more capacity and lower latency, which will be key for Google as it plays catchup with Microsoft and Amazon in the cloud race. Underwater cables today carry an estimated 98% of all internet traffic, and Dunant — which promises speeds of 250 terabits per second (Tbps) — will substantially boost Google’s appeal to prospective cloud customers.

Elsewhere, Google’s third privately owned subsea cable, Equiano, is expected to open later this year, connecting Portugal to South Africa. And Grace Hopper, which will connect the U.S., U.K., and Spain, is planned for 2022. In total, Google has invested in 15 subsea cables, four of which are entirely self-funded.