Live A Live is composed of nine chapters, and for the most part your actions in one won't affect any of the others. The exception – the major exception – is the final chapter, which is unlocked after completing the Middle Ages scenario. It appears on the Chapter Select screen simply as "???" but make no mistake – this is the final and most challenging test in the game.

Your actions in the Final Chapter will determine the game's ending, starting quite literally from the moment you select the chapter from the menu. Read on to find out how to get the best ending.

This guide contains spoilers for Live A Live.

Which Character Should You Choose For The Final Chapter? 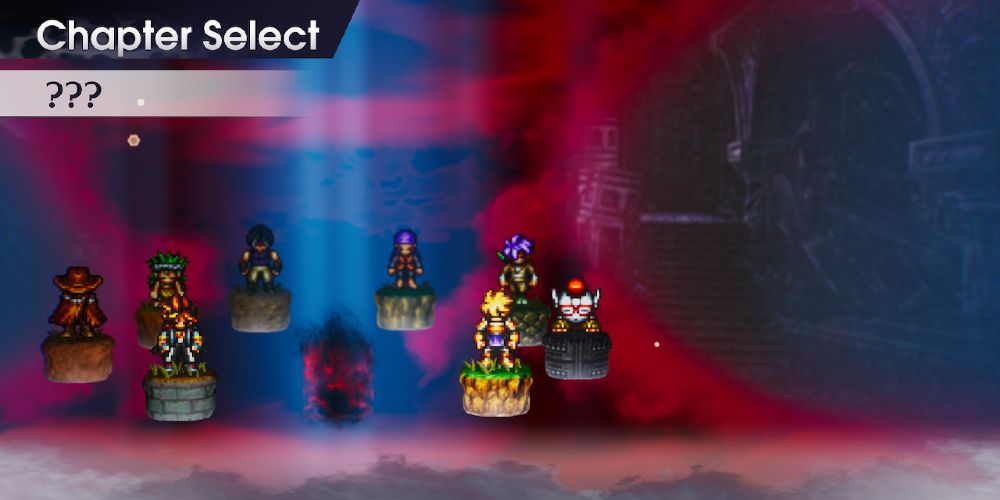 Immediately upon starting the Final Chapter, you're presented with a choice of which of the game's eight protagonists you'll play as. The character you select will become the party leader for the rest of the game, and cannot be changed without loading a save file. For this reason, you should save to a new file before starting the Final Chapter if you'd like to see how every protagonist's story converges.

The decision of which character to choose is up to you, but some characters will have an easier time than others.

Choosing to play the Final Chapter as Oersted brings you to a different scenario that leads to a much darker ending. Do not select Oersted if you want to get the true ending.

Pogo is very strong on his own, but lacks area attacks. If you spent lots of time crafting and defeated the Mammoth King in his chapter, then he likely has excellent equipment and maybe some consumables like Prickly Stones left over from his boss battle.

The Earthen Heart Master's capabilities will vary based on which Disciple survived the Imperial China chapter. Their attacks are among the most powerful in the game, but like Pogo they can struggle against large numbers of opponents. The Earthen Heart Master also has a good starting position once the Final Chapter begins, allowing you to efficiently track down and recruit the other protagonists without too much doubling back.

Oboromaru is built to handle any number of opponents, with many elemental abilities at his disposal. If you completed his chapter without unnecessary violence he'll have some great equipment to start with, especially if you got the hidden Lacquered Medicine Box. Oboromaru may struggle to keep his HP up at first, as he's comparatively fragile and likely short on healing items after his chapter. If you choose him, gather herbs in the forest immediately to stock up on recovery items.

Sundown is the game's best ranged combatant, but he's tactically inflexible. He's good in most situations but not fantastic in any. Luckily, from his starting position he can team up with the Earthen Heart Master almost immediately to create a combined threat that will see you through the early parts of the chapter. If you were able to conserve damage items like Dynamite and Bottled Fire during Sundown's boss fight, they'll make a welcome addition to your starting arsenal as well.

Masaru has a precarious starting position, since his chapter didn't allow him to gain experience or equipment. He should have an expansive repertoire of moves, and he quickly becomes much stronger as he levels up (especially in terms of HP), but until that happens he can easily fall to a bad fight.

If you start as Masaru, go east to the castle armory right away to find a treasure trove of gear. Once he's suited up he'll have a fighting chance, which is good because he's far from any potential allies.

Akira is one of only two characters capable of healing their teammates without items (the other is Cube). He has great elemental diversity and area attacks, but against single opponents he's less effective. Lots of the gear left in his inventory from his chapter can be equipped to other protagonists once they're found, letting his team get an early edge while they're tracking everyone down.

Akira is at his best once he has teammates, so his starting position in the corner of the map can make the beginning of the Final Chapter difficult since he will have to do some walking before he can recruit anyone.

Cube has a great suite of abilities, but cannot gain experience or level up. Like Taroimo, they need to use Robotic Enhancements to increase his stats. Choosing Cube ensures that the team always has heals and buffs available, and removes the extra step required to get them on your team (see below).

If you pick Cube, run straight to the dungeon to get Masaru, then go to the armory to gear up.

How To Form Your Final Party 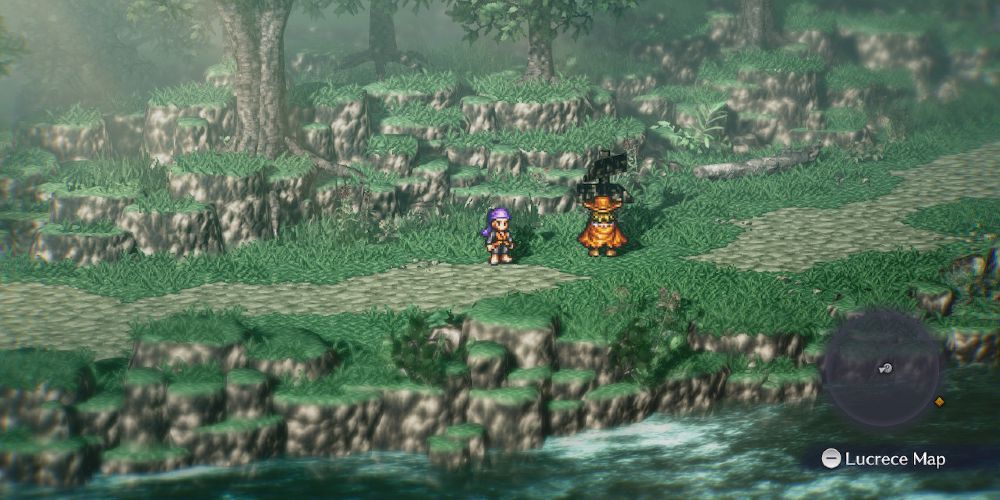 Once gameplay in the Final Chapter begins, your selected character will find themselves in the Kingdom of Lucrece, now renamed the Domain Of Hate after Oersted's transformation. The other heroes will be at their starting locations as described above; visiting them will let them join your party, though many of them have a few extra steps:

When you approach Pogo in the southern grove, he hides in the foliage at the edge of the screen. Keep talking to him, following him to his hiding spots as he moves. Eventually, he will lash out and attack. Defeat him in single combat with your party leader, and he will join you.

The Earthen Heart Master will join your party without too much fuss, but be sure to collect the sword Brion from Hasshe's gravestone while you're at the mountaintop, as you'll need it to enter Archon's Roost.

As you might expect, the shinobi is hidden from view. Attempt to read the sign just before Archon's Roost and Oboromaru will drop from the trees and attack. Once your party leader defeats him, he will realize you are not like the monsters of the forest and offer to join you.

If you approach Sundown near Hasshe's house, he'll walk away without a word. As you descend the mountain, you'll see him watching you from an overlook. Make your way up to him, and he'll leave again. Go into the woods and walk along the path toward the castle; Sundown is there, and will continue to ignore you.

In the castle, Sundown will be in the throne room, and when you talk to him, he'll go west to the guest room. Talk to him there and he'll leave one more time. When you leave the castle town to return to the woods, Sundown will confront you but ultimately won't fight, choosing to join your party instead.

Masaru is in the first cell of the castle dungeon. He'll pick a fight with your party leader when you approach him, and afterward join you.

Akira's mid-reading abilities let him know that you aren't a threat, so he will join you without incident once you find him in front of Uranus' house.

Cube is on the castle rooftop, but their main battery is missing. It's lost in the mountains; from the Summit, travel east and take the first path southward. When the path turns to the west you'll see a green glow in the snow. Pick it up to get the Metal Box, which can be installed in Cube to power them up and recruit them onto your team.

Your party can only have four characters at a time. If you recruit a fifth character, you'll have to part ways with someone to make room. Characters who have left the party can always be brought back in by visiting them at their starting location.

How To Get The Best Ending 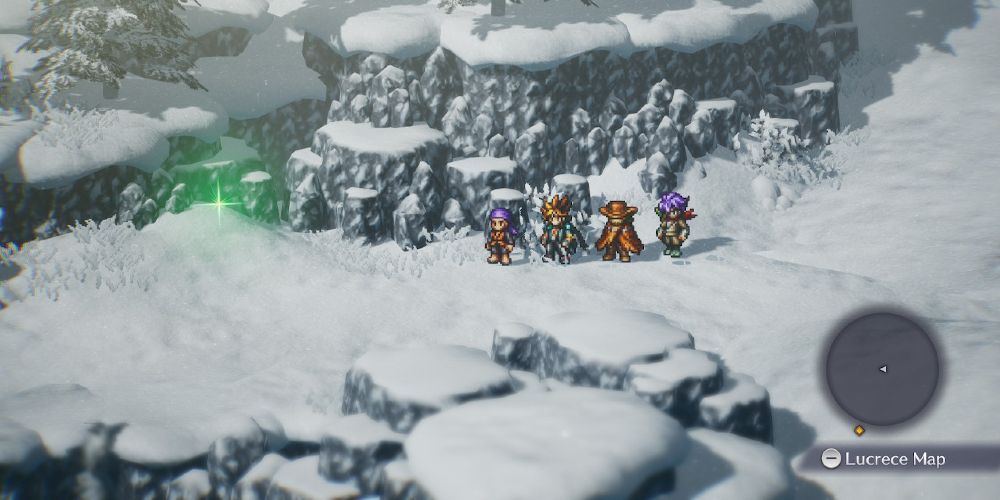 To truly defeat Odio, you must have found all seven characters and invited them to join your party. It's recommended that you fully level and equip all seven characters, and complete the hidden dungeons scattered around the map to get the ultimate weapons for at least your main four members. Stock up on healing items by gathering herbs and grinding loot drops, too.

When your primary team is around Level 20 and your bench-warmers are at least Level 15 (or the equivalent, in Cube's case), it's time to go to Archon's Roost. Make your way through the dungeon to where Oersted's chapter ended; there, you'll battle the fallen knight. This isn't the last fight in the game, but it's hard enough that it may as well be. Odio's combination of powerful attacks and Lightning Tiles can dismiss a character if you're especially unlucky, so don't be afraid to use your best healing items like Izanagi Scrolls here.

At the end of the battle, Oersted will acknowledge his defeat and ask that you kill him quickly. Refuse to kill Oersted and leave; when you return to the room with the statues your other three heroes will show up just in time to see Oersted appear behind you for a rematch. Each hero will have to fight the boss from their chapter alone; they'll be much easier than they were the first time, and you know their strategy by now, so it shouldn't be too much trouble.

With the bosses dispatched (again) you'll have to battle Oersted's final form. Destroying his hands is unnecessary but can make the fight easier overall. Once Odio's main body has taken significant damage, he will disable your main party, forcing the other three to step in – this is why you need them to be at their best as well!

When the backup party gets Odio's HP to critical levels, the rest of the team will recover; have each party member attack Odio in turn (he won't fight back and attacks don't need to charge) to finish him and end the Lord of Dark's threat once and for all!

Elden Ring Was Delayed Because Its Complexity "Exceeded" FromSoftware’s Expectations

Everyone can dress like Jack Sparrow in Sea of Thieves soon