Looking to help bring light to some of the darker places in Skyrim? This quest, which tasks you with helping the Daedric Prince Meridia, will allow you to do just that.

This quest, titled “The Break of Dawn,” is the source of countless memes and running jokes for the extreme volume at which Meridia greets you (“A NEW HAND TOUCHES THE BEACON”), as well as the fact that the quest just starts seemingly at random when you find her beacon somewhere. For everything you need to know to complete this quest and earn its reward, this is the guide you’ll need. 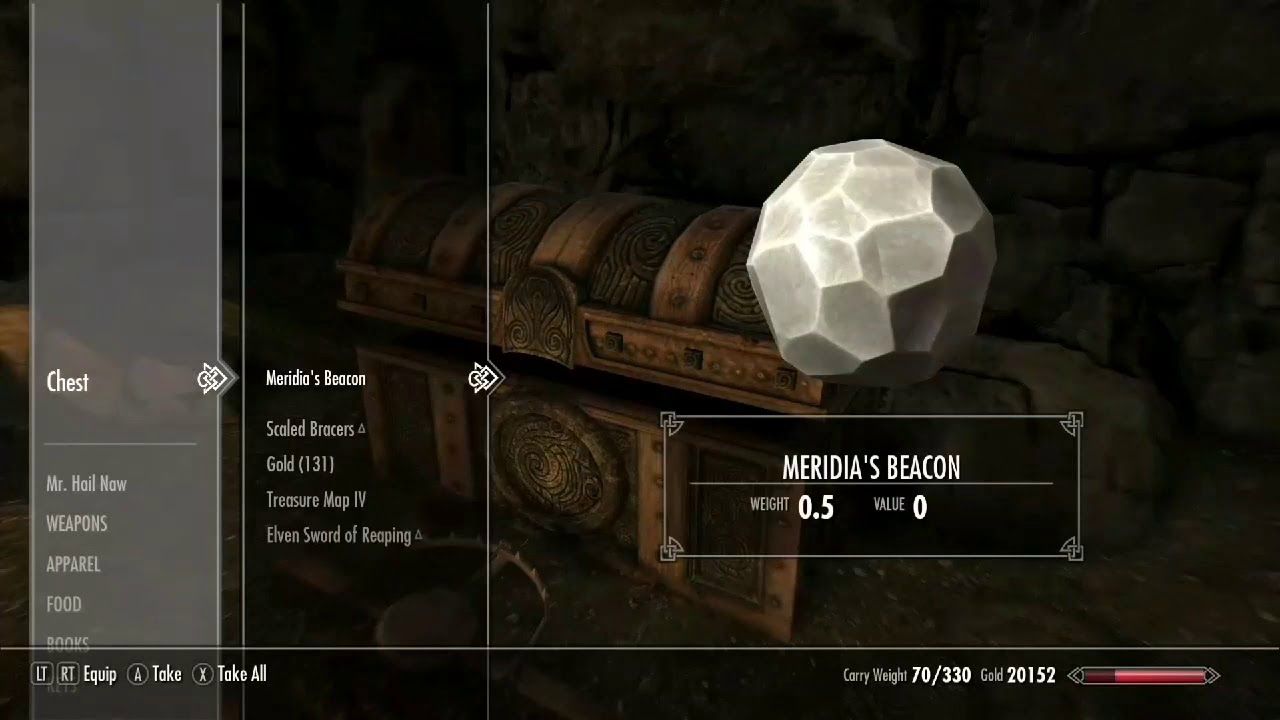 There are two ways to initiate this quest, although one of them is more like the quest initiating itself.

To do it yourself, find the Statue to Meridia, which is located on Mount Kilkreath near Solitude. Meridia will speak to you and inform you that a defiler has begun desecrating her temple with darkness, and she wants you to deal with it. However, she’ll need you to grab the beacon first, so you’ll receive a quest market to one of the over 150 locations that it can randomly be found.

The second way of starting this quest is by finding the beacon in one of those locations. It’s in a random location for your file, and it’ll sit in a chest there until you go grab it. This means if you find it but don’t take it, it’ll remain in the chest where you left it. This is when you’ll hear the very loud “A new hand touches the beacon,” from which many of the memes spawn.

Whether you find the beacon on your own or you find the statue first and Meridia directs you to it, the quest will move on to the next step. 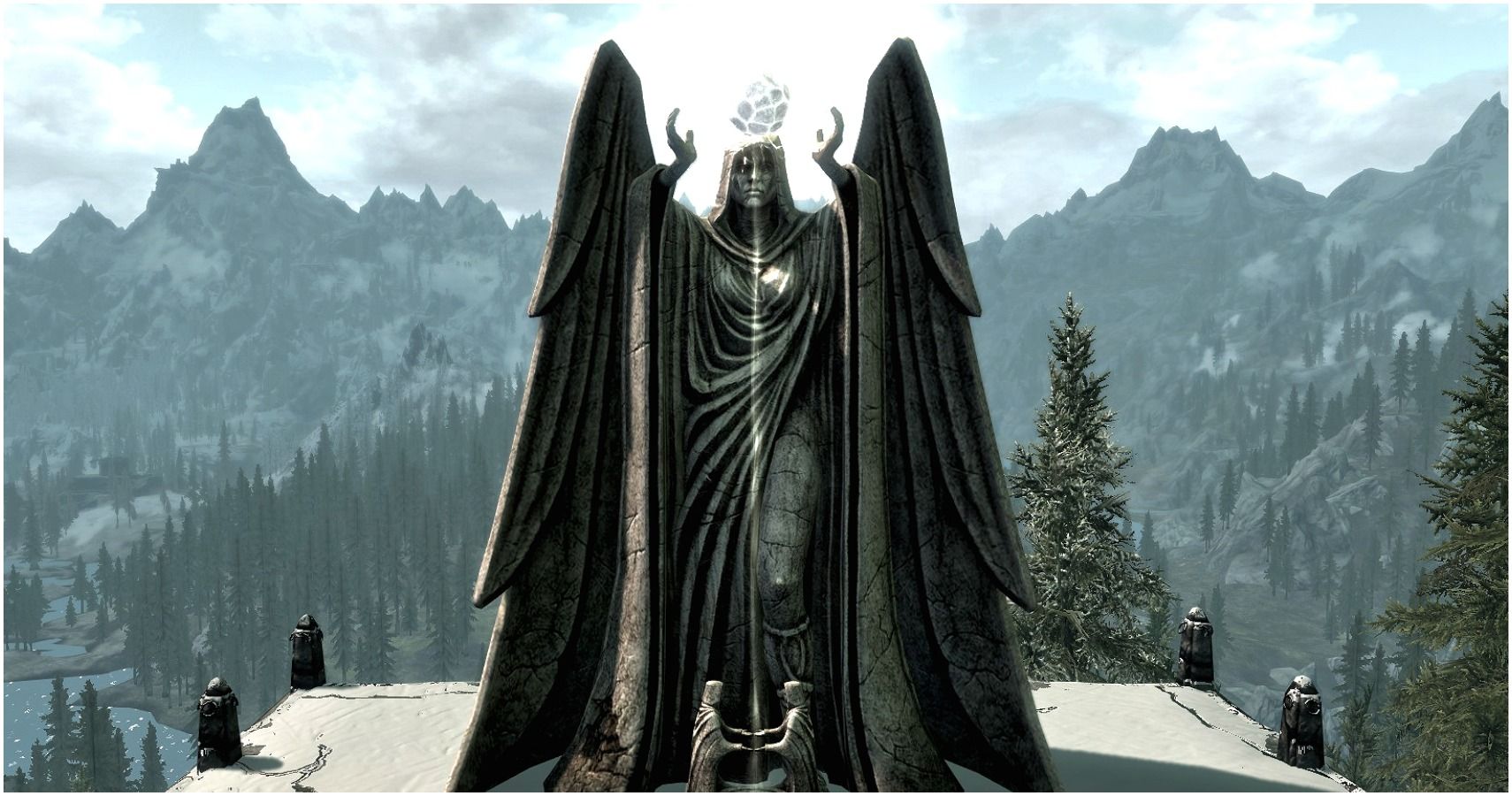 Meridia will direct you to place the beacon at the feet of her statue. Once you do, you’ll be whisked into the sky to speak with her. She’ll tell you about Malkoran, a necromancer who has desecrated her temple.

In order to remove this scourge, you’ll need to direct a beam of Meridia’s Light through the temple and then vanquish Malkoran.

The temple, called Kilkreath Temple, is located right below the statue. Make your way down to it and then inside. 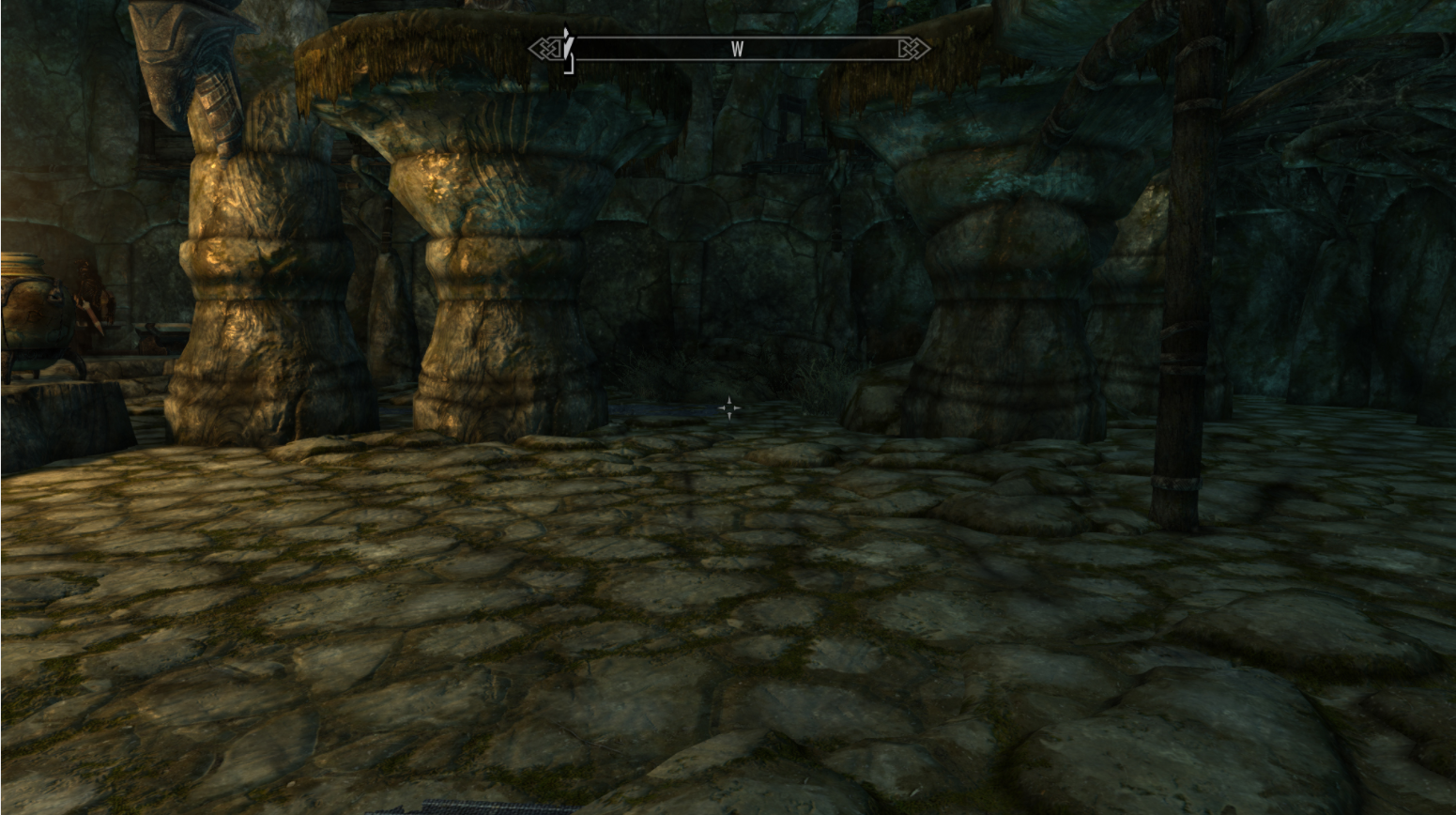 Enter the temple and you’ll find a strange black smoke floating through the air. This is the darkness that Meridia spoke of, and the light will need to be guided through it to clear it out. There are three pedestals in this temple that need to be activated in order to guide the light throughout.

Inside the temple, you’ll come across an enemy type called corrupted shades. These are like shadow skeletons, swarming you with numbers. They’re mostly easy to deal with, just watch out for them like you would any skeletons or other undead in a dungeon.

Activate the first pedestal and then make your way into the second room, where you’ll find more shades and the second pedestal. Activate this one as well. Note: when you step into the beam of light, your health and magicka will deplete.

Keep making your way through the dungeon, fending off the shades, until you reach the third pedestal. There is also an Arcane Enchanter in this room, if you want to use it. Once you activate this one, you’ll see a door that leads out to the Kilkreath Balcony, which contains an expert-locked chest. On the balcony, there’s a set of stairs that leads up to a door to the Kilkreath Ruins.

Kilkreath Ruins and the Catacombs 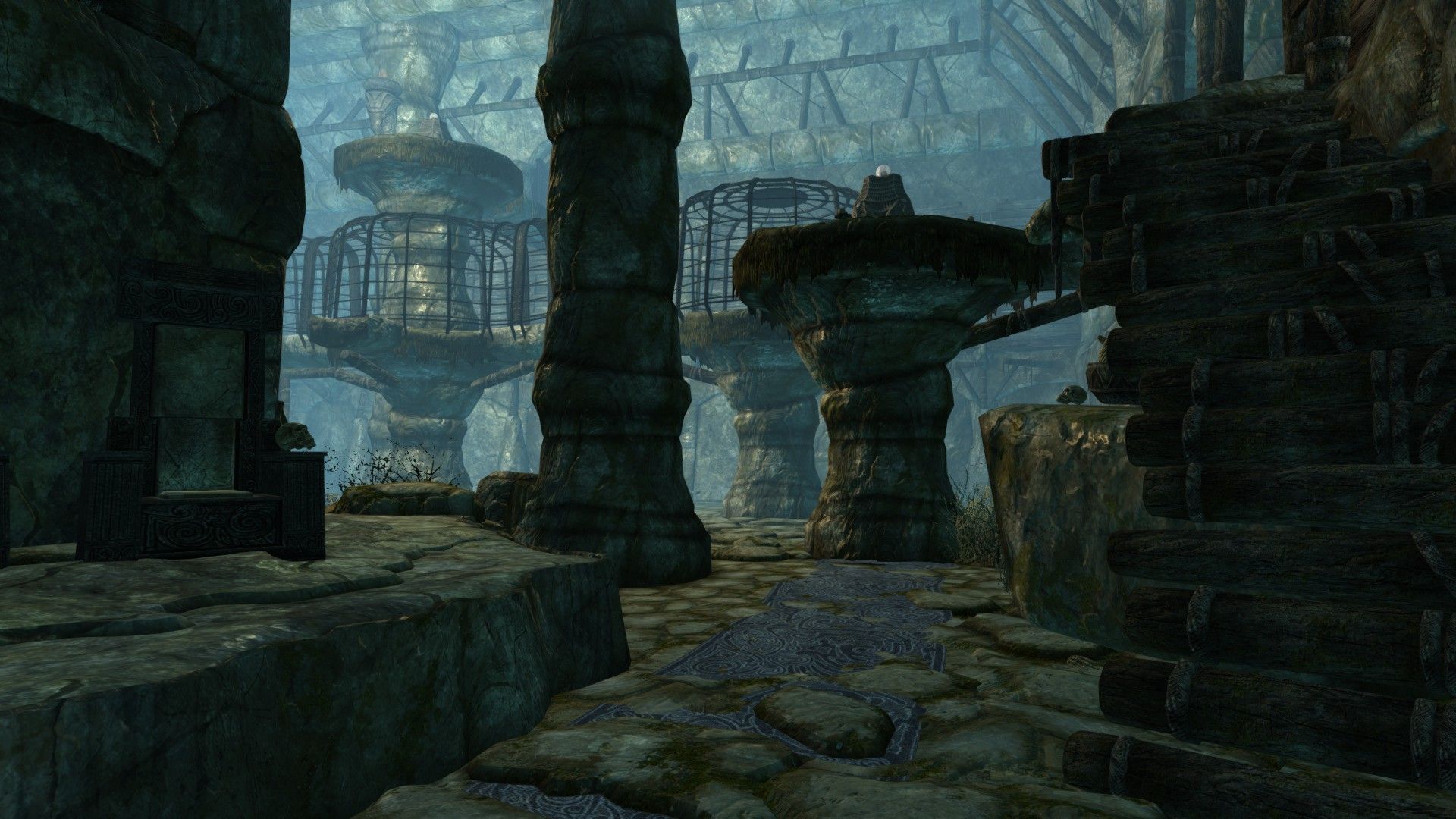 Inside the Kilkreath Ruins, you’ll find a large room with a few levels and a bunch of those corrupted shades. After combing around the room for loot and locked doors, you’ll find the first pedestal you can activate, which will open a door behind you.

Jump back, jump again through the now-opened door, and start preparing to battle even more shades.

You’ll come to a split path. The western path leads to a potion on a weight-sensitive plate, while the eastern path leads to the final pedestal. Once it’s activated, the door to the Kilkreath Catacombs will open on the ground floor of the large chamber. Head inside. 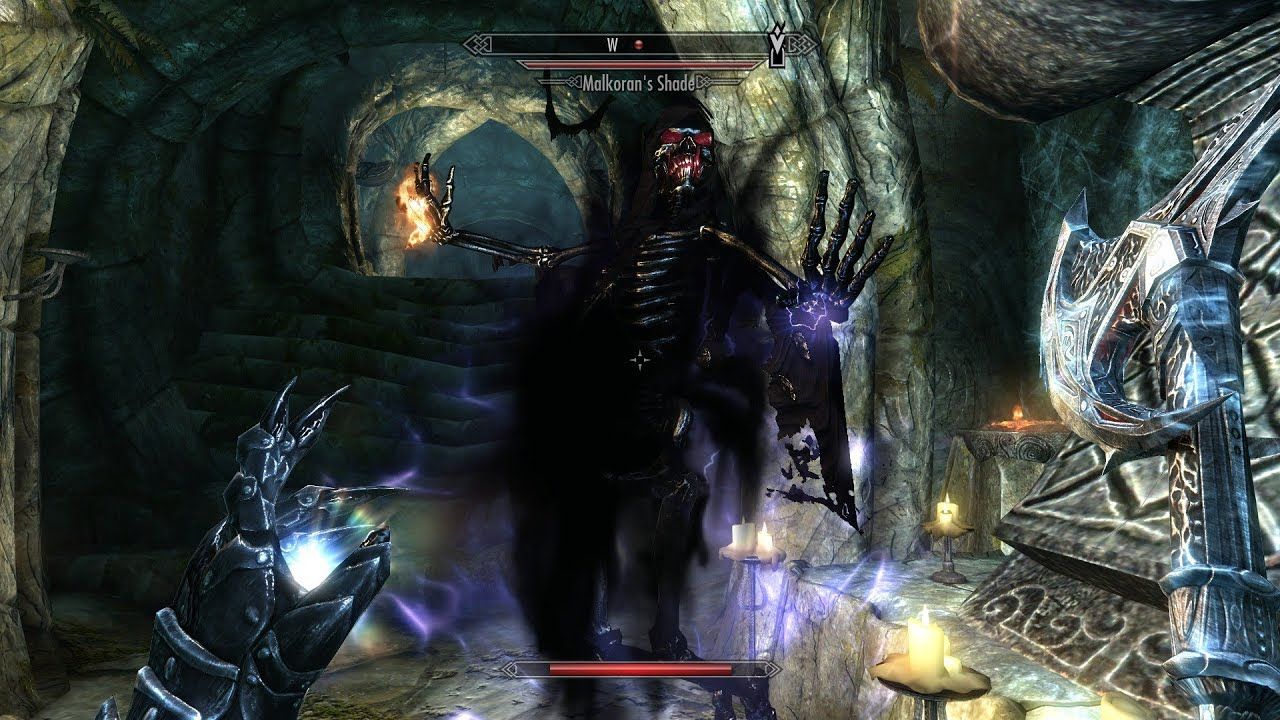 Inside the catacombs, Malkoran is performing a ritual. He’ll have a swarm of corrupted shades surrounding him, and they’ll try to get behind you while you confront Malkoran. This necromancer uses Frost spells, so if you want, prepare yourself with some Frost resistance. Additionally, his shade will appear after he is killed and you’ll have to take that down too.

There are a few strategies for this fight.

One involves picking off the corrupted shades with a bow or other ranged attack before going down to confront Malkoran. If you step too far forward, they’ll come toward you. Malkoran himself doesn’t really seem to want to move away from the altar, so it’s possible to slowly whittle him down from a distance sometimes and/or pick off the shades first.

Another strategy consists of charging in to quickly take Malkoran out first, then dealing with the shades, such as using Vampire Lord or Beast Form, if possible. Followers and summons are a good idea too, as they’ll cover your back where the shades try to get you from.

Or, you can use Bend Will on Malkoran to make him take out his own shades before you dispatch him. If you do it fast enough, the Bend Will effect will still apply to his shade.

Make sure to bring a few health potions, as Malkoran’s Frost attacks are very powerful. 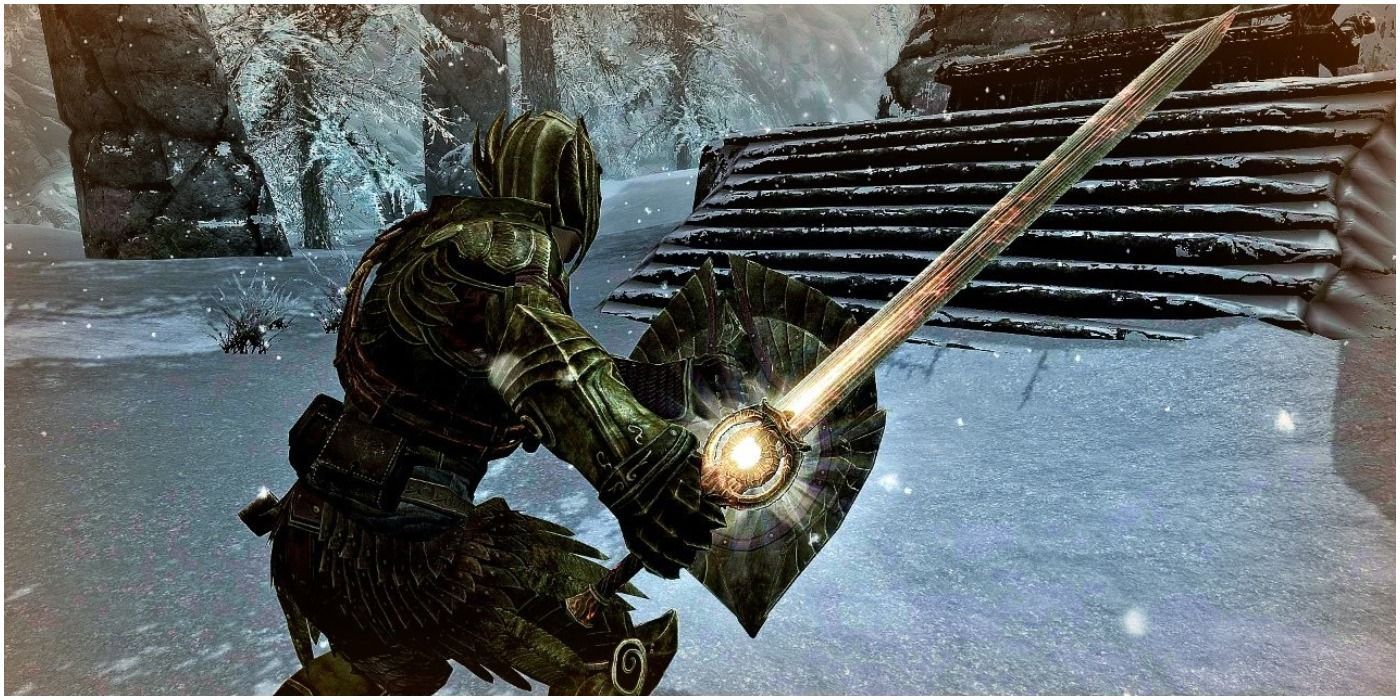 However you manage to defeat Malkoran, Meridia will be pleased. She will tell you to take the powerful sword, Dawnbreaker. Note: when you collect Dawnbreaker, you’ll be teleported outside, so loot anything you want first, and grab the sword last.

After you grab Dawnbreaker, Meridia will teleport you back into the sky for one final conversation. You can choose to be polite or rude with no effect. From here, the quest will end.

Dawnbreaker is a fantastic weapon. This sword has two enchantments, one of them a unique enchantment called “Meridia’s Retribution.”

This unique enchantment labels any undead target with the effect for ten seconds, and if killed within the time, causes them to explode. The explosion damages nearby undead and turns them, including undead followers.

The fiery explosion functions basically the same way as the Bane of the Undead spell, meaning it’ll harm you if you’re a vampire or Vampire Lord. It also benefits from the Necromage perk.

The second enchantment is a basic burn effect that deals 10 points of Fire damage. This can be increased with Augmented Flames or Ahzidal’s Mask.

If you want to upgrade Dawnbreaker, it’ll require the Arcane Blacksmith perk and an ebony ingot.

NEXT: 10 Things The Elder Scrolls 6 Should Carry Over From Skyrim 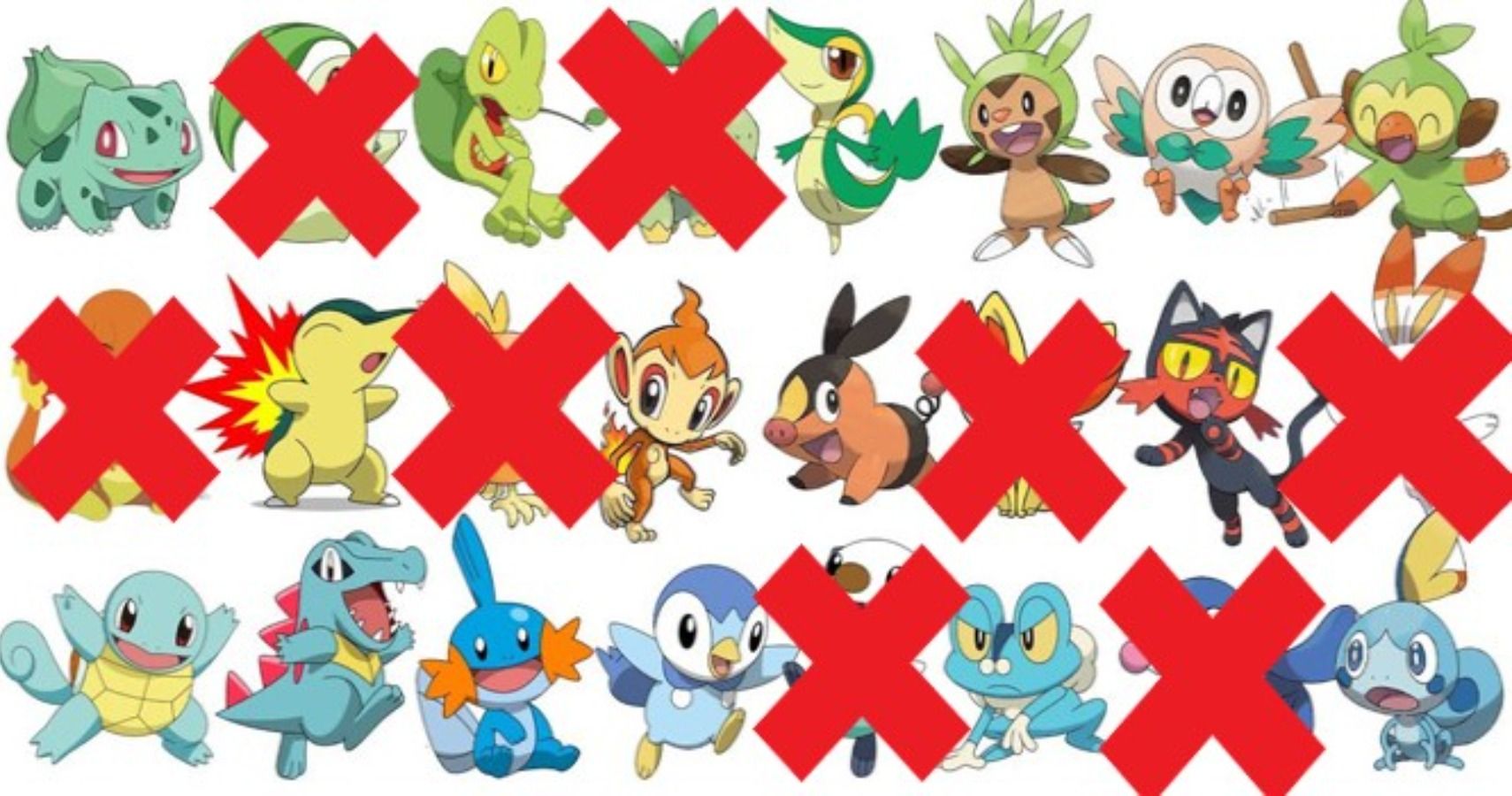 Michael is a journalist with several years of experience writing about video games, television, and social issues. He loves indie platformers, Pokémon, and Hack ‘n Slashers.

Red Dead Redemption 2: How To Keep A Horse Before Unlocking The Stables

How to acquire the Crunch crafting blueprint in Cyberpunk 2077