Fallout developer Bethesda was the most talked-about studio on Reddit between 2013 and 2019, a study has revealed.

It appears that Bethesda’s more popular, or more infamous, than many gamers would have imagined, having eclipsed the likes of Activision and Electronic Arts as a subject of online conversation.

Casino.ca took up the painstaking task of scouring the r/gaming subreddit to find out what the gaming community has been discussing since 2013 and, where it pertains to devs, Bethesda came up at No.1, edging the likes of Activision and Valve with over 93,000 mentions. 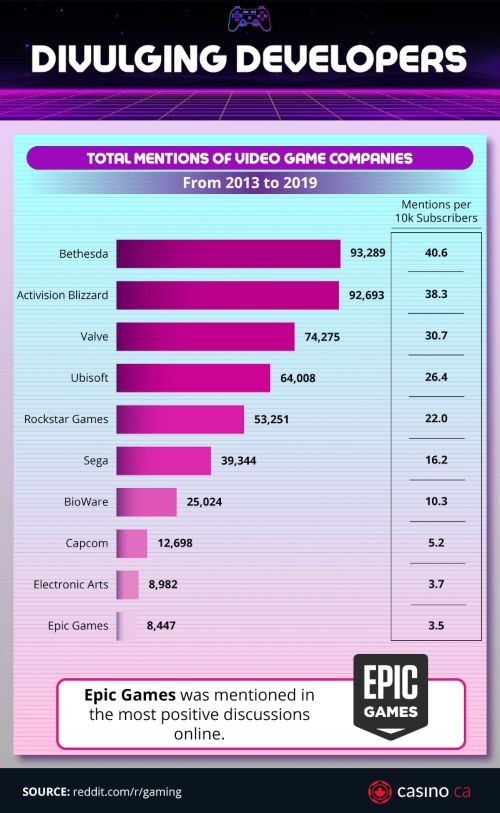 Given Bethesda’s popularity, Fallout was the most discussed title on Reddit. Skyrim was the second-most mentioned while Halo and Pokemon followed. The Legend of Zelda, Dark Souls, and Destiny were also very popular in conversation. Final Fantasy, despite being in the bottom half, garnered the most positive discourse.

Of course, upcoming titles were among the many games talked about on Reddit. The most anticipated inbound game, based on the chat, appears to be Cyberpunk 2077, which was pushed back to September 17 after initially being announced as an April 2020 release. Lego Star Wars: The Skywalker Saga followed, with Dying Light 2 and Halo Infinite trailing significantly.

No Man's Sky Update Lets You Become An Outlaw

Fortnite: Neymar Jr Skin To Be Revealed On April 27