With a new episode released for Wintermute comes a huge update for the open-world survival mode of The Long Dark. Episode four features Mackenzie traversing a whole new region and even uncovering some secrets of Blackrock Penitentiary.

But what's left behind when our hero moves on? Well, aside from a lot of loot (which will already be in low condition if the game file is pretty old), you can also clamber through the ruins of a derelict prison as well as uncover a new crafting recipe. There's only one episode of story mode left, but developers have guaranteed mod support to keep the community alive long after the game has been 'finished.'

The biggest addition is, of course, a new map to explore and die in. The player can arrive in this region from two places; The Keeper's Pass North which connects to a crumbling road at the south of the map, and an ice cave from Timberwolf Mountain, which comes out just below the Bricklayer's Retreat. Blackrock provides the player with plenty of broken-down cars (check for car batteries) and indoor buildings, including the Old Substation and a Prepper Cache.

Getting to the Abandoned Mine can be frustrating and tricky and involves trekking upriver to climb two ropes. Don't be fooled by story mode and attempt to cross at Mule Bridge; that would be too easy.

The first-ever armor item to be introduced to The Long Dark, picking up the Ballistic Vest is worth the trip to Blackrock alone. It can be found within the Prison, in Cell Block C, but requires creeping along the gangways and crawling between burnt debris to access. At the end of a row of cells, you'll find this accessory beside the corpse of a familiar face.

When equipped, the player will benefit from being Armored, a new condition unique to the item. But as the game's saying goes, there are no choices without consequences. The vest weighs a whopping six kg (13.2lbs) and reduces sprint speed by 40 percent while providing 50 percent wildlife protection. In comparison, the Moose-Hide Cloak offers only 20 percent protection while weighing four kg and costing some mobility. It's up to the player and their priorities what to go with.

Timberwolf packs were introduced to The Long Dark with the addition of Bleak Inlet and the first Ammunition Bench in the Errant Pilgrim update. We're all familiar with lone wolves breathing down our necks, but this added a whole new dynamic to survival. The white and gray wolves form packs, but only in these two regions, and egg each other on to take chunks from you. The only way to stop the constant nips is to reduce the morale meter that appears at the bottom of the screen.

This can be done by firing arrows or hurting any of the wolves, or passing a significant amount of time. Sometimes a well-aimed stone can even scare them off a little, but normal flares and fires are totally useless. It's easy to be caught out by two to four hungry wolves encircling you, but be very wary during auroras. That's when they get desperate.

If you don't have ammo to waste on keeping them at bay, there is now a new item just for such an event. Noisemakers are craftable, handheld items that can be lit without matches and thrown to deter wildlife. If a moose or bear is already injured, the Noisemaker is capable of outright killing them. Similar to a gunshot, the explosion a thrown Noisemaker causes will reduce a morale meter.

To unlock the recipe, the player must travel to the Abandoned Mine and pick up a ready-made Noisemaker from a box within a small storage area under the stairs. From there, it requires an Ammunition Bench, 0.10kg of Gunpowder, Cloth, and a Recycled Can to craft. Recycled Cans and Cloth can wash up on beaches, but the requirement of Gunpowder makes this item limited in the world.

Every map needs a way to get to it, and Blackrock has two routes. From Pleasant Valley, the player can simply follow the road to the Long Curve, a previously inaccessible landmark that has now been cleared. From there, you emerge into a rather scenic transition zone called Keeper's Pass South. Carrying along the road will bring the player to a Trailer and some cars to rest in. There's even a Fishing Hut for an endless food supply.

Hop down onto the river and follow north-west to a cave for the next leg of the journey. The path on this map is conveniently laid out, with a little shelter along the way in the form of a dilapidated hut housing a bed and a stove. Past the rickety bridge, the player will find a road. Going left will lead to Blackrock, but go right, and you will find a rope down to the riverbed and a possible Flare Gun.

If you're already in Timberwolf Mountain or don't fancy traversing a further two maps to get to the new region, then you're in luck. By following the stream uphill from Crystal Lake and climbing the rope up the waterfall, you will find that the previously plain rock to your left is now a cave.

The inside is warm and suitable for curing any pelts you might be carrying. There are only two spots that involve climbing down the rock face, no rope required, and the player will emerge a short walk from the Foreman's Clearcut Trailer and the Bricklayer's Retreat.

As if the developers would provide us with a new beneficial condition (Armored) without also afflicting us with another way to die. The player will only need to encounter this if they insist on getting to the Ammunition Bench in the Prison. In story mode, we were tasked with finding valves and the necessary valve lever to shut off a poisonous gas leak. However, in survival mode, it's, unfortunately, a case of booking it through the gas.

It's recommended that you drop as much weight as possible and have plenty of energy. This is a sprint, not a marathon, and once the elevator ascends a floor, the suffocation affliction will wear off. The screen will go yellow and hazy, but just keep running. On the other side is a bed, some lockers with the code, and a little food, but nowhere to make a fire – so think ahead. The player needs to come back the same way, so keep enough Lantern Fuel handy for both ways. Try not to panic.

Until now, the only place to craft more ammunition for the Rifle and Pistol was at Bleak Inlet Cannery. The Timberwolf packs seem to be drawn to this crafting bench though, as they appear solely on these two maps. Lone wolves patrol the prison yard, which you need to walk through to find the bench inside. Hopefully, you've survived the Abandoned Mine and picked up the key code to access the room housing the Ammunition Bench.

Once the door has been opened once you don't need to wait for an aurora to get in again, but the bench will only power up with this weird weather, as well as a fire. Players can now craft Noisemakers here too.

The music of the quiet apocalypse is both gentle and unnerving, and provides the backdrop to an immersive adventure. All soundtracks were composed by Cris Velasco and Sascha Dikiciyan, and most have been released on Steam and Spotify.

With the new region comes a new song, Fury, Then Silence, consisting of an unsettling piano accompaniment with a disconsolate violin melody. It sets the scene wonderfully and captures the hopeless, white landscape full of danger and death. 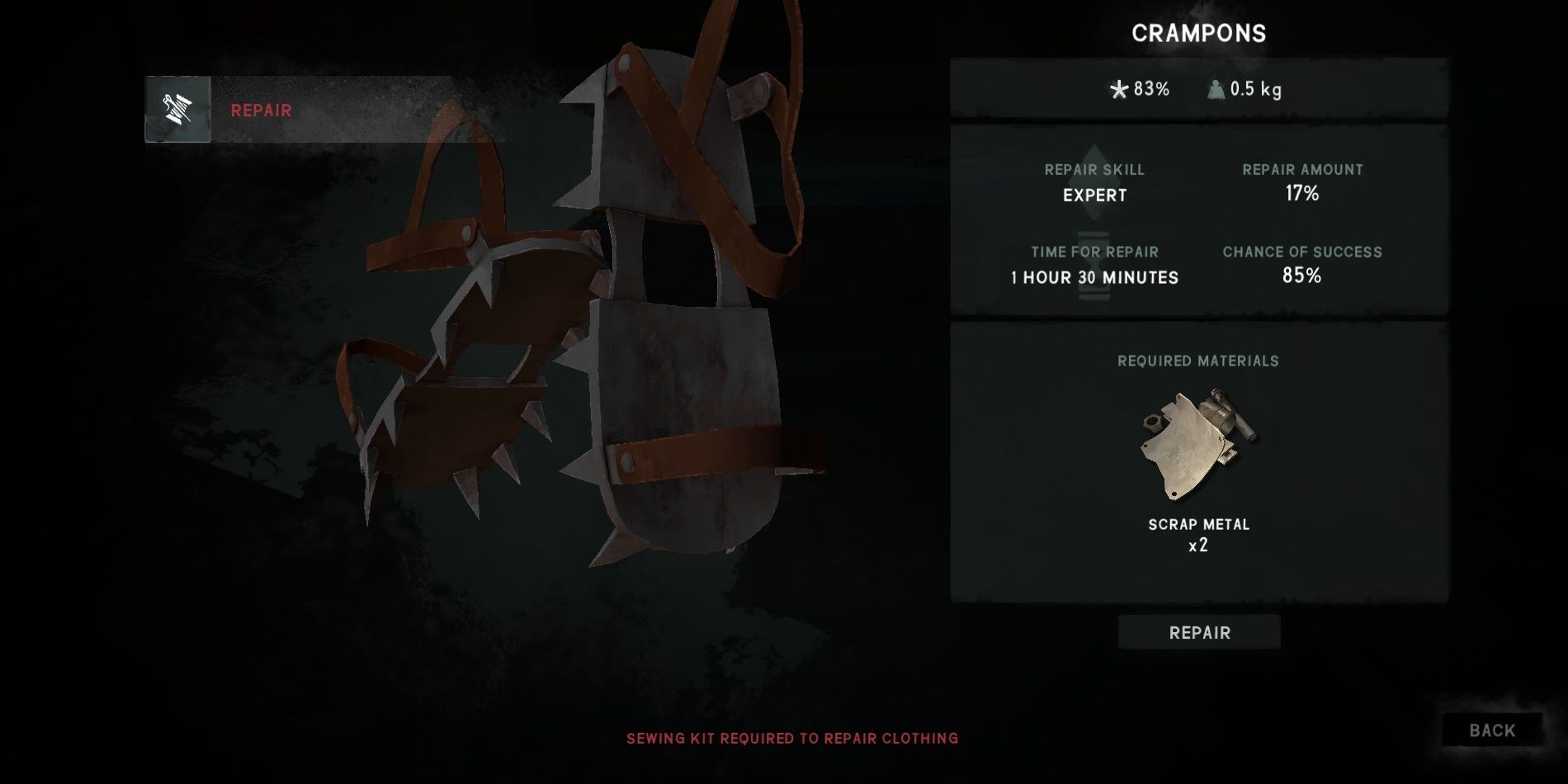 Thank the devs, it's finally here! As soon as Crampons were introduced, along with Ash Canyon, the community was informed that this was it, if you break your Crampons, you're never getting the Sure Footing benefit again. This accessory provides the player with increased stamina when climbing Mountaineering Rope, a lower chance of rolling an ankle when mountain goating where no mortal was meant to go, as well as an extra second (up to six) on Thin Ice before falling through.

Crampons are a necessity for any of you that like traveling and make beachcombing a much safer activity for late-game. Now, it's possible to use Simple Tools or Quality Tools, along with Scrap Metal, to repair this one-of-a-kind item.

Games Inbox: Will Elden Ring be game of the year 2022?

Loop app from Microsoft keeps projects in sync across Microsoft 365