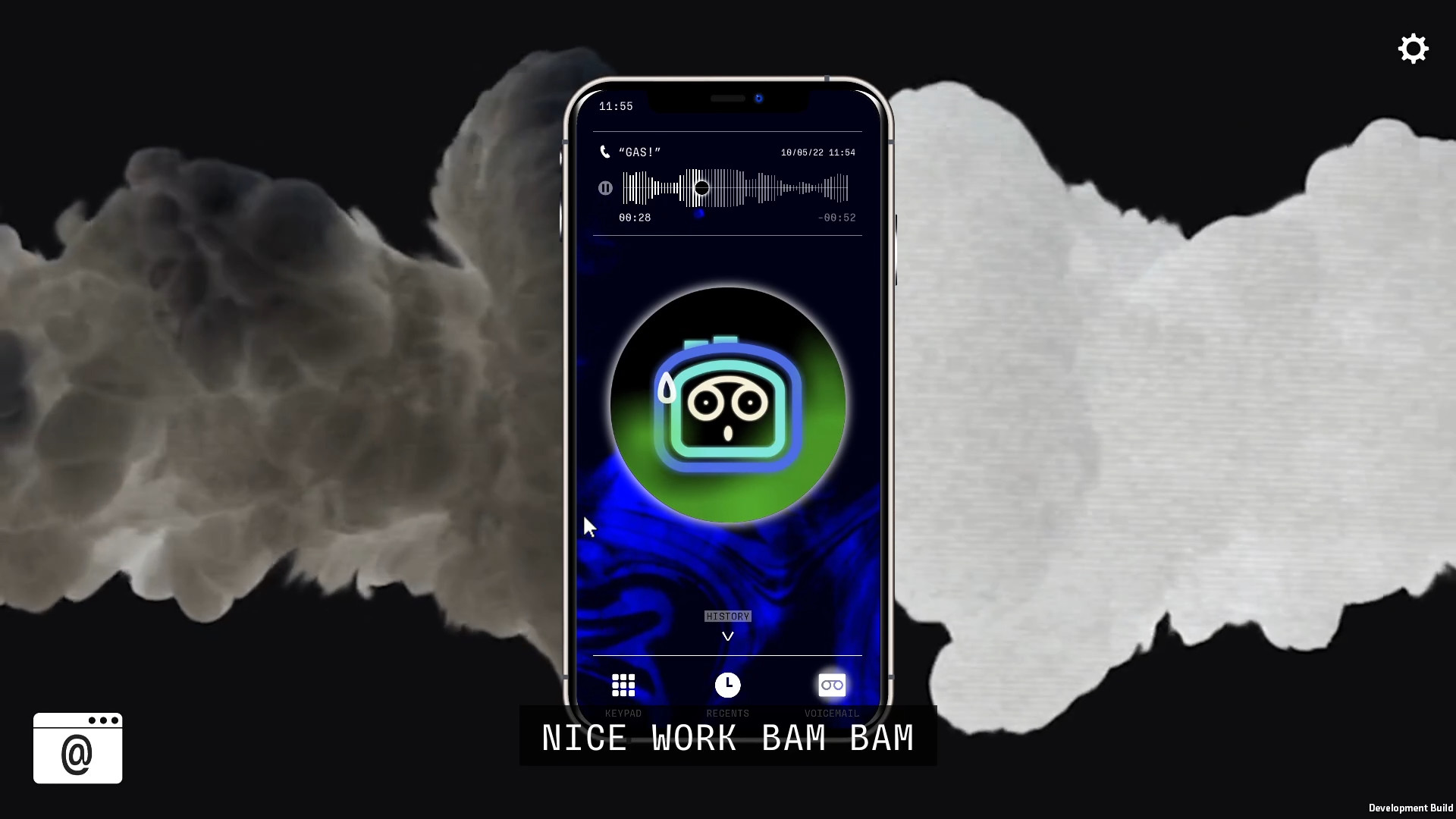 Why use a mouse or gamepad when you can talk to a game instead? As this innovative techno-thriller makes clever use of voice recognition.

There’s something about the phrase ‘voice-controlled adventure game’ that has the potential to immediately alienate a large percentage of gamers. Is it a gimmick? Will it work as well as it claims to? The answer to both of those is yes, but also no. It’s a simple concept executed in a much more complex way than it first seems, but not without its hiccups.

Unknown Number sees you taking on the role of ‘Casey’ – although the game acknowledges that that’s not your real name. It seems the voice recognition technology isn’t quite smart enough to implement your actual name into the game, which is one of a small handful of areas where it falls short. As the game begins, you find yourself on the receiving end of a series of calls from, guess what? An unknown number.

You’re introduced to Amanda Reid and Ethan Hammer, who initially don’t realise they’ve misdialled their intended recipient. Casey quickly becomes embroiled in their plans to take down oil manufacturer Sigoil, after they pledged their life to an underground eco-warrior movement run by children. This involves stealing a substantial amount of crypto currency via fraudulent entry to a series of secret vaults aboard an oil rig.

The voice recognition feature is used heavily throughout the entire game, with a series of different puzzles and challenges to be completed in order to gain entry to the vaults. Far from just verbalising answers to questions, these vaults will expect you to match volume, pitch, and patterns perfectly in order to crack the codes, and there isn’t a skip feature if you can’t quite manage it.

One such challenge sees Casey pitted in an intense battle of verbal noughts and crosses, with the mobile device cleverly using the keypad as the game board and marking the placements as turns are taken. The AI here is not stupid, and will not allow an easy win, blocking any attempts at three-in-a-row almost before Casey finishes taking their turn. Another challenge sees the player having to match the exact voice pitch of a board member of the oil company in order to fraudulently listen in to a confidential phone call without being detected.

This is a truly impressive feat for tiny indie studio Godolphin Games, especially considering this is their first foray into video game production, but could prove frustrating for those unable to pitch a note to save their lives… or Amanda and Ethan’s.

The plot is well thought out, albeit a little cliché in places, and in a 2.5 hour first playthrough, some of the characters do get more than a little irritating. However, just as the concept of finding a vault, cracking its code, and stealing a wallet starts to get repetitive, the plot throws in a few surprises and you’re forced to make choices based on various moral dilemmas.

Unfortunately, it seems that no matter which choice the player makes, the outcome is the same, so that feeling of agency and control is swiftly taken away once you realise this. With no alternative endings or branching narratives the features feels underdeveloped and largely pointless.

The technology is impressive but there are many occasions where putting on a terrible Yorkshire accent is the only way to convince the AI that you’re answering ‘no’ and not ‘yes’, and on several more occasions even saying nothing seems to register as providing the correct answer.

When the main selling point of the game is the innovative voice control it really needs to work seamlessly. Another way that Godolphin Games could have improved the voice control would be consistent recognition when the player has stopped talking, in order to progress the narrative – rather than waiting until the timer has been depleted. It does utilise this later in the game for specific challenges, but it would make the experience feel more immersive if it was all the time.

There are no hint or skip options once a telephone call has been answered, which does create frustration at points where the puzzles are a bit more complex than expected. If the game thinks it hears a ‘yes’ response to Amanda wondering whether the player has heard what she’s said, and had time to note it down, there’s no way to go back to that call until the game decides it’s time to hit redial and relay all of the information again. Yes, all of it.

Speaking of noting it down, it would be very helpful for Unknown Number to provide some sort of in-game notepad, as for those playing without multiple monitors, the scramble to find a real-life pen and paper occurs with zero prior warning.

As the game progresses, the atmosphere intensifies with an eerie layering and mixing of voices within the automated puzzle sections. The accompanying music in the form of the ringtone also crescendos and gets more complex as the plot twists and turns, to really add drama to the scenario unfolding. Having said that, the intermittent calls from DCI Maya Sewell and the Metropolitan Police transmissions add a humorous undertone, lightening the atmosphere but also the tension.

Another endearing appearance comes from Casey’s little mobile robot friend, who’s available on most screens to provide hints if needed and is interactive enough to follow the story along with Casey, reacting in an emotive and quite adorable manner via a series of facial expressions and animations.

The conclusion of the story is an emotional affair, and it’s at this point that the game becomes truly gripping, although the ending leaves some of the finer details unclear.

Another concern is the usage of a real in-game browser as opposed to a virtual one. It seems to leave the game open to security breaches, and that’s pretty off-putting. The transfer from in-game to real-life at the closing part of the story works very well though, at blurring the line between reality and fantasy.

Unknown Number is not a serious enough game to be categorised as a thriller, but it is an engaging and enticing puzzle adventure that tells a great story via some seriously impressive mechanics, even if they’re only scratching the surface of what may be possible in the future.

In Short: An innovative combination of voice-controlled mechanics, combined with simple puzzles and an engaging story, that is short enough to not outstay its welcome.

Pros: The voice-controlled feature is much cleverer than it first appears and really tests the limits of its own capability. Intriguing premise and enjoyable, if occasionally repetitive, puzzles.

Cons: The plot can get worryingly cheesy at times and the in-game functional browser seems like a potential security risk.

Audio-Driven Adventure Game The Vale: Shadow of the Crown Launches In August

Resident Evil 3: How To Find Every Fuse & Unlock NEST-2