There are many weapons to choose from in Valheim, though it would take endless resources to craft them all. That’s why we’ve configured a list to lay out the best of the best, no matter what it is you’re up against.

Generally speaking, the type of weapon you’ll want depends on what sort of damage you’re looking to dole out. Blunt damage is dealt by clubs and war hammers, while axes and swords incur slash damage on foes. Knives can deal half slashing and half piercing damage, while straight piercing damage is best inflicted by spears, polearms, pickaxes, and bows. But for the purposes of this article, bows and arrows have their own categories. 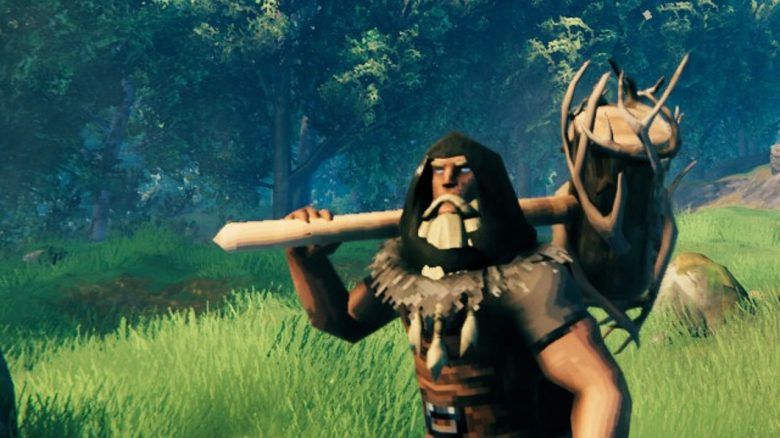 Attainable early on, this war hammer is viable throughout the game, dealing dual damage types and a hefty knockback. One wallop with this spike-infused hammer afflicts 20-38 blunt damage and a bonus 5 points of piercing damage. The base median damage of the Stagbreaker equals out to about 25, while it’s capable of raising that number to 43 points once fully upgraded.

It also has a 2x Backstab buff, which refers to taking an enemy unawares, and a whopping 150 knockback damage. This is a significant increase from the maximum 50 points of knockback that any weapon before this can incur.

While there are some maces and the like which deal more damage, the Stag Breaker stands out for its extraordinary knockback capabilities and dual damage types, making it more versatile.

The next war hammer to outshine the Stagbreaker is the Iron Sledge, which can’t be crafted until later on, after reaching the Swamp biome. This weapon deals a base of 55 blunt damage, which can scale up to a threshold of 73 once it’s fully upgraded. The real reason this war hammer outshines other blunt damage weapons is its 200 point knockback rating.

x10 Ancient Bark  (Obtained from Ancient Trees in the Swamps.)

x4 Ymir Flesh (Only purchasable from Haldor, the merchant in the Black Forest.)

This elemental war hammer is a late-game weapon that is fairly versatile. It starts with an overall base damage of 95 split up into 40 frost, 35 blunt, and 20 spirit damage. It delivers a 120 point knockback and has a 3x backstabbing multiplier. Once upgraded to its final tier, the frost damage raises to a maximum of 58, bringing the weapon’s overall damage to 113.

If you’re not looking for all that elemental damage, another option is the Porcupine mace made from Fine Wood, Iron, Needles, and Linen Thread. It’s not necessarily better than Frostner but makes a good alternative if you’re looking for some bonus piercing damage instead of frost and spirit.

x10 Ancient Bark (Obtained from Ancient Trees in the Swamps.)

x 30 Silver (Detectable beneath the Mountains using the Wishbone from Bonemass.)

x5 Ymir Flesh (Only purchasable from Haldor, the merchant in the Black Forest.)

x5 Freeze Glands (Drops from Drakes in the Mountains.) 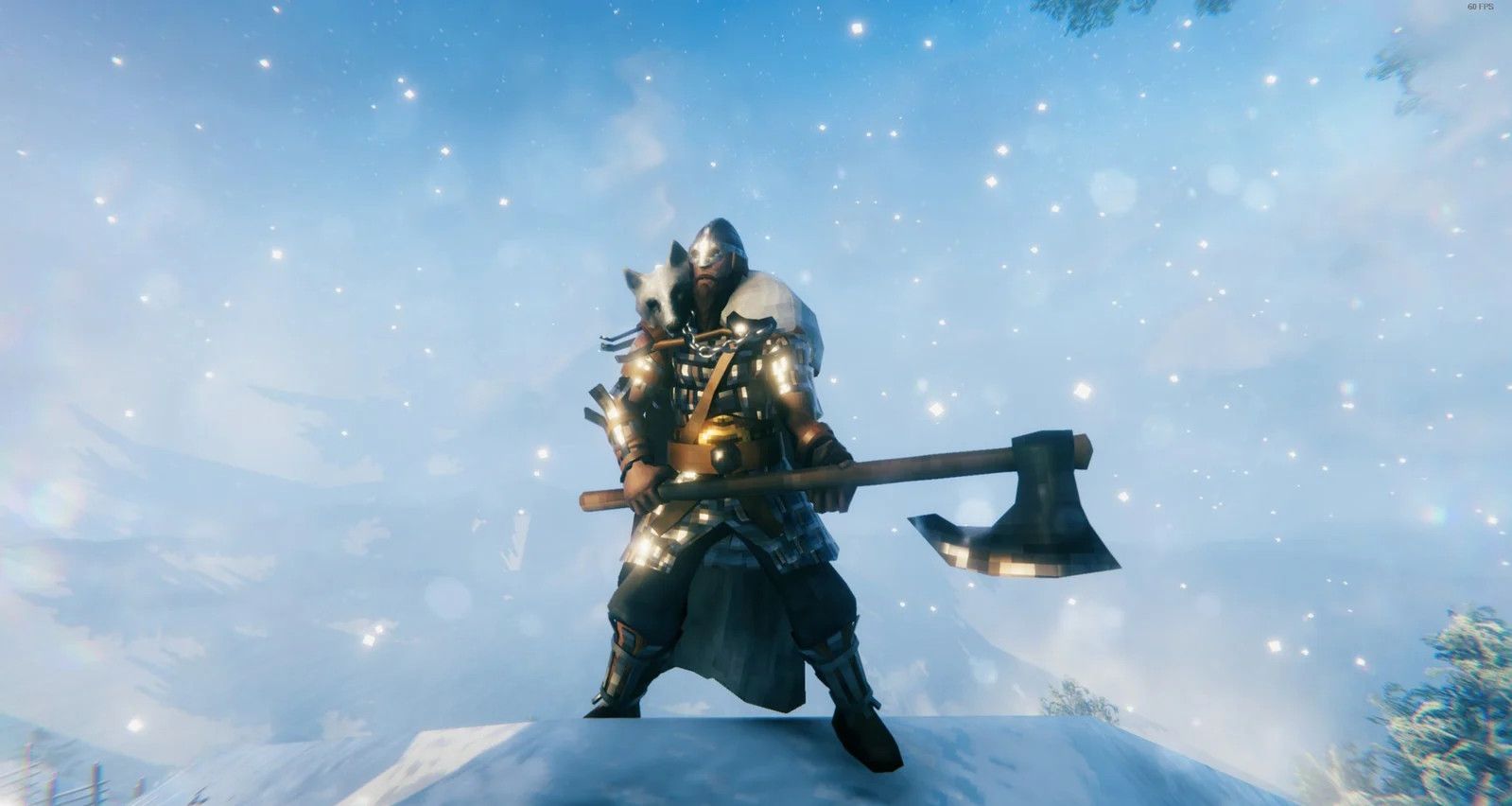 The best source for early-game slashing damage comes from the Bronze Axe. While the sword deals slightly more slashing damage when fully upgraded, both weapons have the same base damage, and the axe has a stronger knockback, giving the player more room to breathe. Not to mention this is the first axe you can craft in the game that is suitable for chopping Birch and Oak trees to obtain Fine Wood.

x4 Wood (Readily available from any tree or fallen branches.)

x8 Bronze (Processed in Smelter from Tin and Copper ingots.)

While the Silver Sword’s damage is split between slashing and spirit, its overall damage ranging from a base of 103 to a fully upgraded threshold of 138 isn’t to be brushed aside. This sword will also be your best source of spirit damage in the game, outshining Frostner’s max spirit damage by 25 points and holding its ground with a 40 point knockback rating.

x2 Wood (Readily available from any tree or fallen branches.)

x40 Silver (Detectable beneath the Mountains using the Wishbone from Bonemass.)

However, for straight slashing damage, you’ll want to craft a Battle Axe after farming the materials in the Swamp biome. This two-handed axe deals a base of 75 damage, ranging to 93 upon fully upgrading it. It also clears space for the wielder with an adequate 70 point knockback.

x30 Ancient Bark (Obtained from Ancient Trees in the Swamps.)

While the Black Metal Sword can be upgraded to a slightly higher damage threshold, the Black Metal Axe deals a heftier knockback debuff. And with the same base damage output, the axe outperforms the sword overall.

Black Metal forges the strongest weapons in the game currently, giving the axe a 95 base damage rating and bolstering that number to 110 slashing damage at its highest tier. The Black Metal Axe also boasts an adequate 60 point knockback rating. 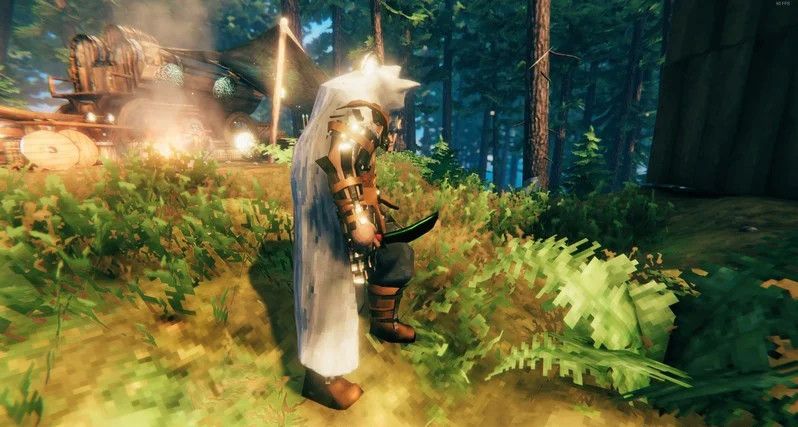 Knives are the best at one thing: Backstabbing. Rather than the common 3x backstabbing bonus most weapons incur, Knives deal a devasting 10x backstabbing multiplier to the damage output.

With key components available by sailing the Ocean biome, the Abyssal Razor knife should be fairly easy to craft after obtaining Fine Wood from Birch and Oak trees in the Black Forest and building a raft to hit the water.

With overall damage ranging from 24-30 split evenly between slashing and piercing, this knife will serve you well for most of the game, right up until the end game when you can begin mining for Black Metal in the Plains biome.

x20 Chitin (Mined from the backs of Leviathans in the Ocean)

Once you get your hands on Black Metal, you will want to trade out the Abyssal Razor for this ruler of stealth attacks. Dealing 36-42 overall damage depending on its tier, you can incur 18-21 slashing and piercing damage with each stab. Coupled with the 10x backstabbing multiplier applied to all knives, this knife is the end-all be-all of assassin work. 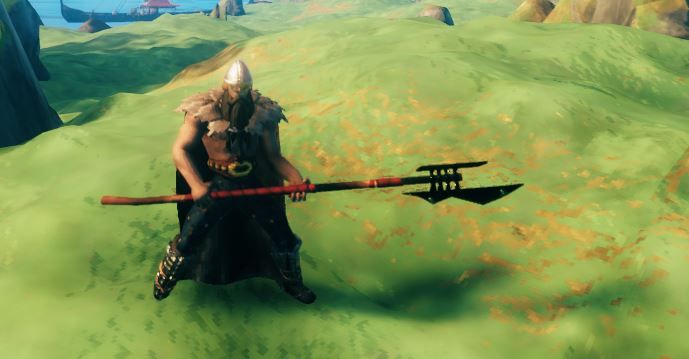 Polearms are generally better for piercing damage than spears. That being said, you should craft a Flint Spear to get you through until you can craft the first substantial Atgeir in the Bronze Age.

The Bronze Atgeir will be favored for piercing damage in the early game, since its materials found in the Black Forest and it’s craftable as soon as you get your Smelter and Forge fired up. This polearm doles out a range of 45-63 piercing damage, which is a significant rate for the early game. It also delivers a 30 point knockback, which is better than any other comparable piercing weapon.

x10 Wood (Readily available from any tree or fallen branches.)

x8 Bronze (Processed in Smelter from Tin and Copper ingots.)

To increase piercing damage for the mid-game, you’ll want to craft an Iron Atgeir after you are able to mine Scrap Iron in the Swamp biome. This Iron variation has an increased 65-83 piercing damage output depending on its tier.

x10 Wood (Readily available from any tree or fallen branches.)

This is an end-game polearm as Black Metal is only obtainable in the Plains biome. It deals the most significant piercing damage in the game so far, with a range of 105-123 relative to its tier.

It’s by no means the best piercing damage, with a meager range of 33-48. However, a pickaxe had to be included on this list as it’s the best weapon for taking on rock golems — and the Iron Pickaxe is the best pickaxe in the game so far. It does have an adequate knockback rating of 50, though. 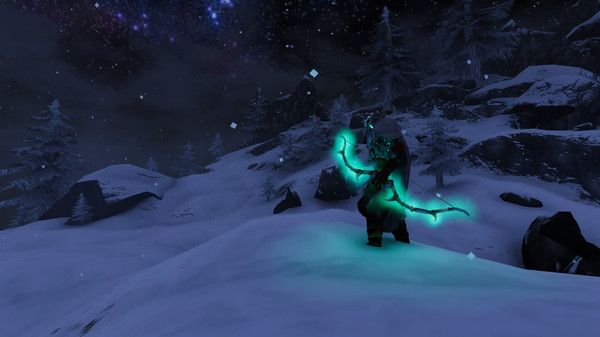 While all the other bows in the game only have a 10 point difference in damage, the Draugr Fang stands out with a base of 52 and a max of 76 total damage once fully upgraded. This damage is split between piercing and poison, which is a great combination as poison will incur constant damage while kiting enemies. While the poison damage dealt only equals out to 5-20, the piercing damage of 47-56 is still greater than the next comparable Hunting Bow.

x10 Ancient Bark (Obtained from Ancient Trees in the Swamps.)

x20 Silver (Detectable beneath the Mountains using the Wishbone from Bonemass.)

x10 Guck (From Gucksacks on trees in the Swamp. Mine using axe or pickaxe.) 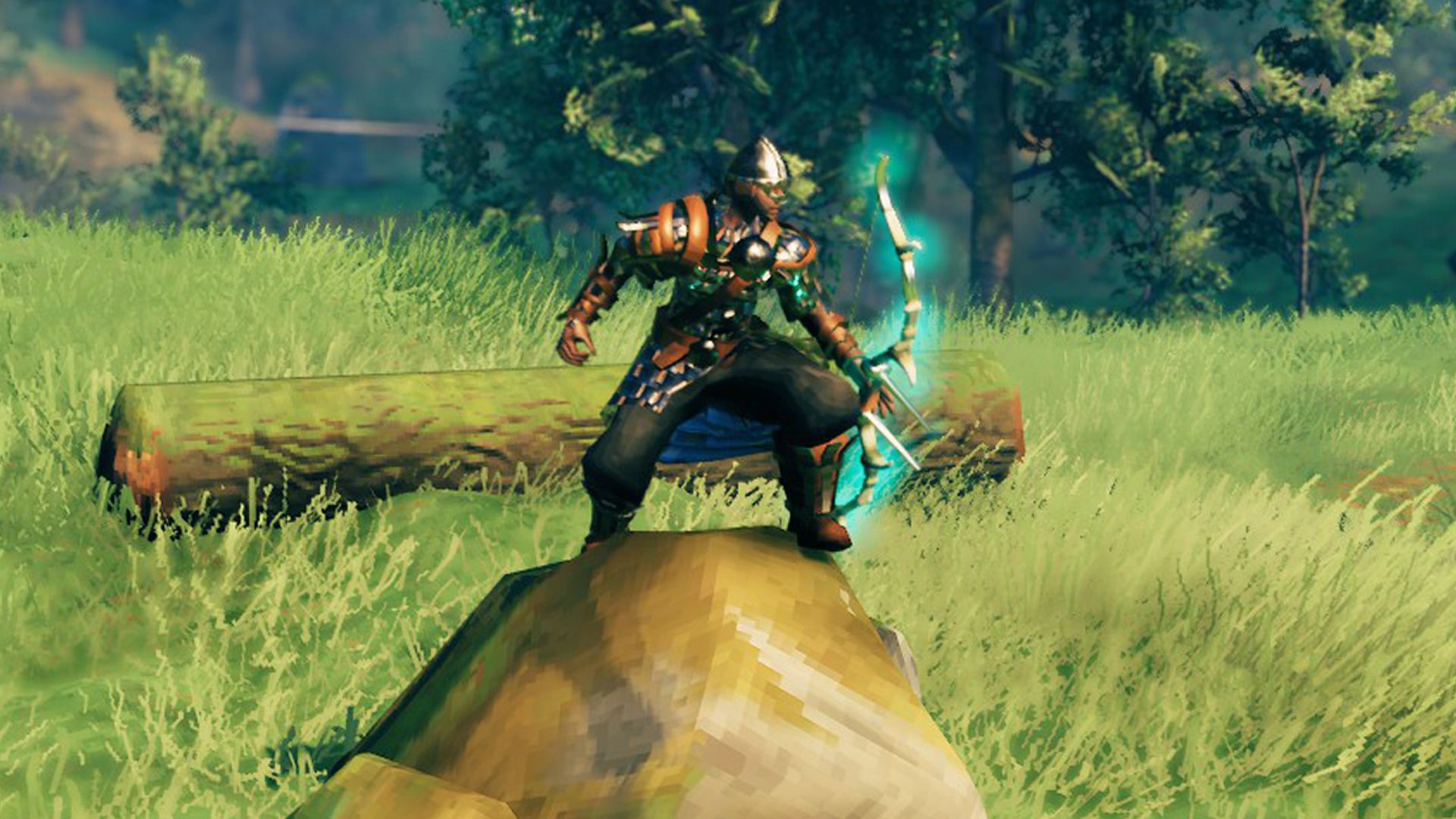 Fire arrows only deal 33 total damage, but with 22 of that being fire damage, you can assure your enemies’ health will drop consistently. This is also the only weapon that deals fire damage, so it covers you against enemies that aren’t susceptible to much else (unless you want to bash away at them with a torch).

Silver arrows hit with a piercing damage of 52 and a spirit damage of 20 for a 72 point rating overall. Whether you need the spirit damage or not, these little beauties hit harder than any of the basic Wood or Metal arrows available and are equal in damage to the Obsidian arrow.

Poison arrows have a total damage of 78. While only 26 of that is piercing damage, that leaves a devastating 52 points of poison damage the enemy will suffer. Much like Fire arrows, these toxic tips will ensure the enemy is taking a hefty amount of constant damage, and they pair splendidly with the poison from the Draugr Fang.

Frost arrows also deal 78 total damage, though 52 of that goes to frost damage. That’s not a setback in the least, as frost damage is a great way to debuff an enemy’s movement speed. There are also some enemies that aren’t susceptible to much else and may be dangerous to approach, leaving these icy shards as your last line of defense.

Every arrow has a 10 point knockback save the Needle arrow. That, coupled with its 62 points of piercing damage, makes it the best arrow when you need pure piercing power. However, it’s not attainable until you make it to the Plains biome.

The base materials, Wood and Feathers, are easy enough to gather. You can find fallen branches lying all over the Meadows and Black Forest biomes. Not to mention any tree you chop down is bound to produce at least a few logs and many times the Resin needed for fire arrows.

Feathers are a pretty common find in Chests in these starting biomes as well. You can also find them strewn about the Black Forest floor or while felling Birch trees. If you don’t come across any while exploring for some reason, you can also pluck them straight from the source (Gulls or Crows) found in pretty much every biome save the Mountains and Swamps.

Getting into the other materials needed for crafting these specialized arrows, as mentioned earlier, Silver and Obsidian are mined in the Mountains biome. However, Obsidian deposits appear above ground as spherical rocks with distinguishable black veins.

Ooze can be collected from Blobs and Oozers you kill in the Swamp biome, while Freeze Glands drop exclusively from Drakes found in the Mountains. Needles are a late-game drop, available only from Deathsquitos in the Plains biome.

NEXT: I Have Devised The Perfect Way To Cross Any River In Valheim Without A Raft 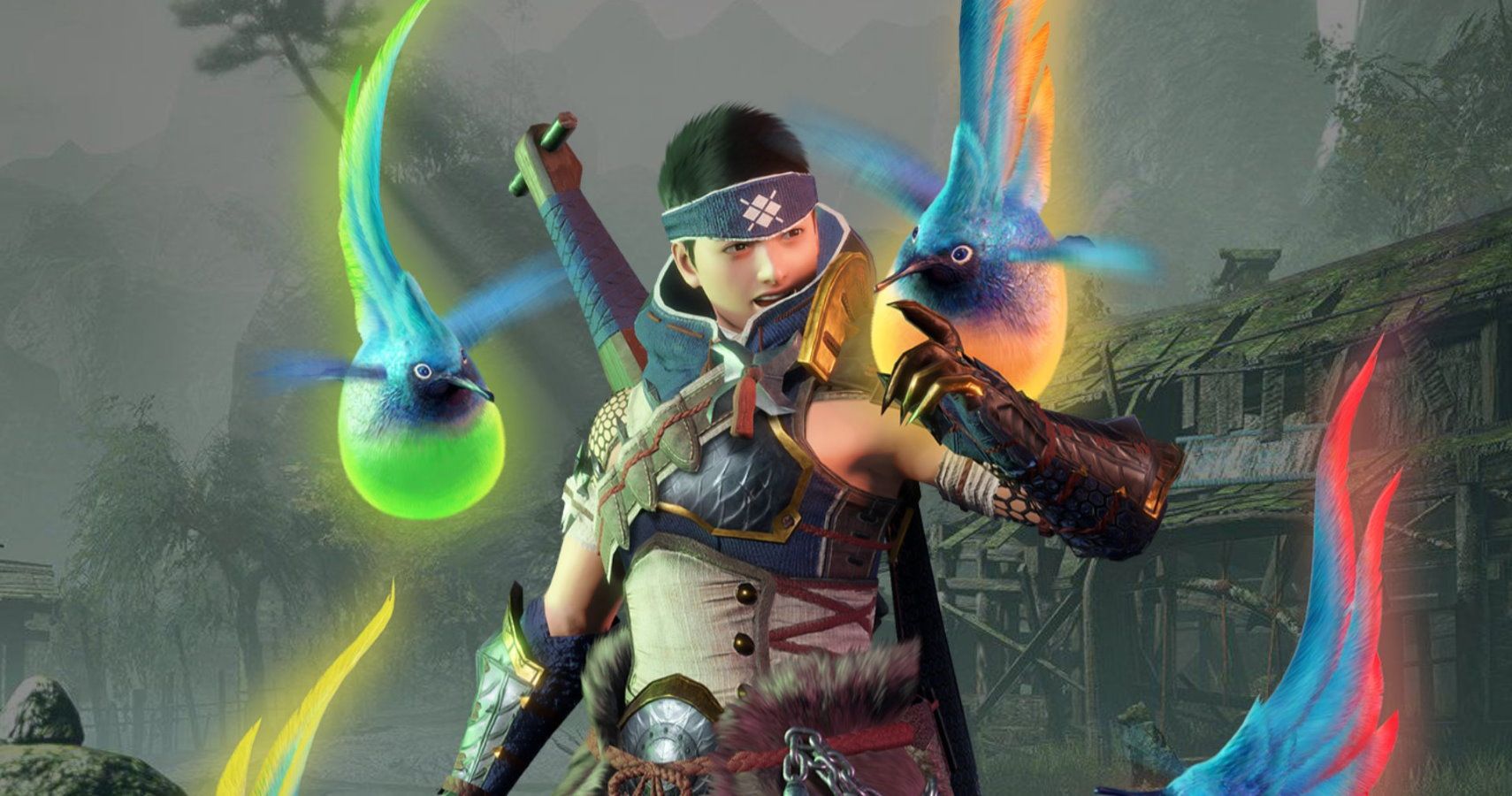 Dota Gets A Netflix Anime Next Month

Ten Years After Launch, Halo 3 Is Getting A New Multiplayer Map