During Nintendo’s Super Mario Bros. 35th anniversary Direct video, perhaps the biggest surprise was Mario Kart Live: Home Circuit. This spinoff of the long-running Mario Kart franchise incorporates a physical remote-controlled kart with a camera, your Nintendo Switch, and mixed-reality technology to provide a racing title that uses your house as the track. The camera mounted on the physical kart transmits the image to your Switch or television screen, with in-game items like boosts and shells affecting the movement of the physical kart. The concept is unique and compelling, but I was curious about how it would fare in execution. After seeing it in action earlier this week, I feel it could be an awesome twist on the familiar franchise.

Developer Velan Studios began by building its own RC car using scraps from drones, cameras, and sensors in an effort to create a remote-controlled car that was as easy and fun to control as a car in a video game. As development continued, Velan began adding more features like overlaid visuals and course creation mechanics before flying to Kyoto, Japan to pitch the idea to Nintendo. The team at Nintendo loved the idea and wanted to use it as a new way to play Mario Kart. After three years of development, the project is finally ready to release as Mario Kart Live: Home Circuit.

When you purchase Mario Kart Live: Home Circuit, it comes with your choice of Mario or Luigi in a physical kart, four gates, two arrow signboards, and a USB charging cable. The software itself is a free download from the Switch eShop, but if you don’t have the physical kart, it just plays a video that tells you about the game. The gates are crucial for your course layout, while the signboards are more for giving racers a visual cue that a turn is coming up. When the camera sees these two physical elements, it transforms them with flashy visual effects on your screen. 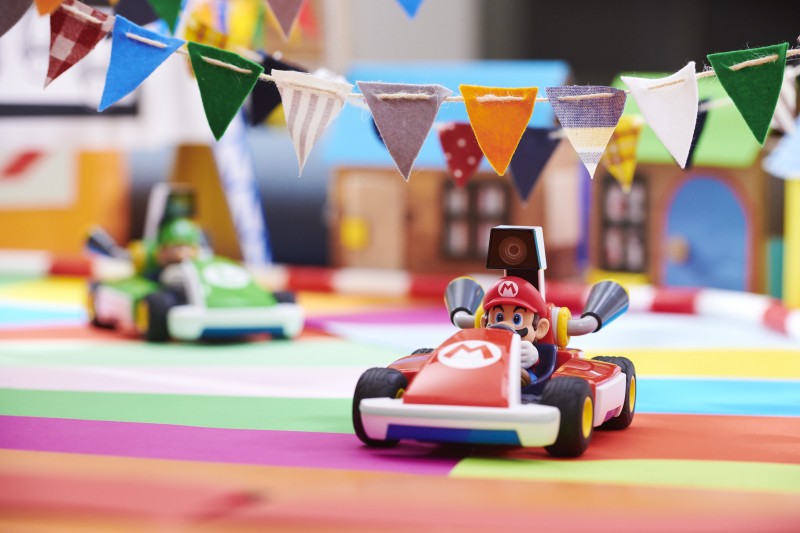 As you unpack the bundle, you need to connect your kart to the Switch. To do this, you use the camera on the kart to scan a QR code on the Switch. Once you scan it, your kart is instantly paired with the Switch and you’re dumped into the tutorial of the game. The tutorial teaches you the basics of controlling your physical kart through the Switch, including braking, going in reverse, and steering. The tutorial closes out with giving you a Gold Mushroom to show off boosts, and finally, having you use the kart’s camera to take a driver’s license photo for in-game use.

Once you’re out of the tutorial, it’s time to create your first course by placing the four numbered gates included with the kart around the room. Once you’re ready to draw the course, Lakitu comes by and puts paint on your in-game tires and asks you to draw the track by driving through the gates, adding any curves and twists you want along the way. Once you finish your course, it’s time to take part in your first race. When you play single-player, your rivals are Bowser Jr. and the Koopalings. 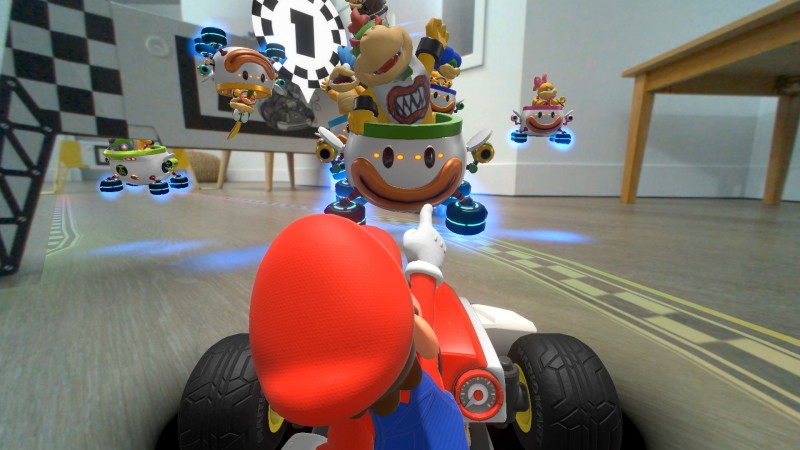 Now that you have your bearings, you have a few options when it comes to racing: Grand Prix, Time Trial, and Custom Race. Grand Prix gives you a three-race cup with points and coins divvied out at the end of each race. Coins, which can be earned throughout all modes, help you unlock in-game customization items like outfits, karts, and horns. However, playing Grand Prix lets you unlock new gate types, as well as the highest speed: the furiously fast 200cc.

Between races, you can adjust your course layout, but even if you don’t, Grand Prix delivers different experiences across the three races; the first race in the Grand Prix I saw was fairly normal, while the second took on an underwater environment with electrified Amps acting as obstacles under the gates. If you run into an obstacle in the game, or if you’re hit by an item, your physical kart comes to a stop. Similarly, if you get an item that gives you a boost, your physical kart will speed up to correspond with the on-screen action. 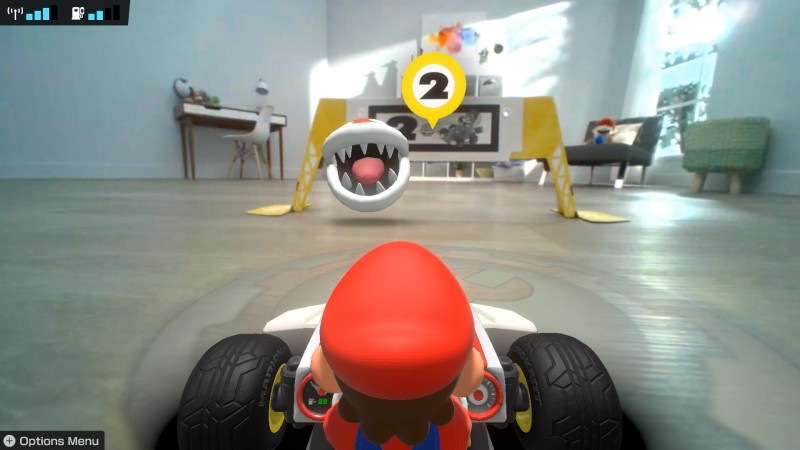 When you’re creating your course, you can even set certain gates to provide unique effects and items when you pass through them. For instance, the magnet will pull you toward the gate, increasing your speed and adjusting you to the center, while the Magikoopa gate mirrors the track on the screen temporarily, providing an awesome mixed-reality effect where your on-screen track is mirrored, but your physical kart continues driving down the real-life course. Other gate options include Piranha Plant, which picks up your kart and holds you in front of the gate, stopping your physical kart and partially blocking the gate for other racers, and Chain Chomp, which pulls you along in a somewhat uncontrollable manner. Of course, it wouldn’t be Mario Kart without items you obtain through boxes. In Home Circuit, you can use traditional items like the Mushroom and Red Shell, or a Sandstorm effect that whips wind at racers, pushing their karts left and right so the players have to adjust to keep on course.

While you’re customizing your track, you can also add different environments. From environments like underwater, which adds Amps and Cheep Cheeps, and snow , which adds Freezies, to even boost-filled Rainbow Road and Goomba-laden 8-Bit themes, Mario Kart Live: Home Circuit hopes to give you some variety, even if you don’t want to tear down your track and build an entirely new one. 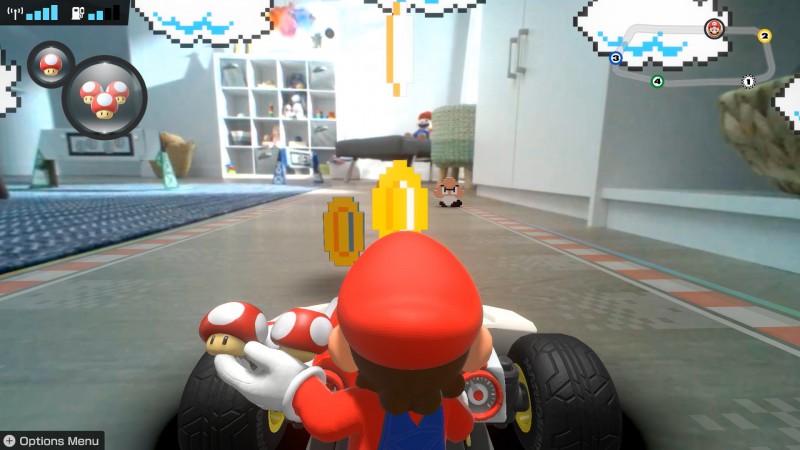 If you’re hoping to enjoy the experience with others, it could prove a pricey venture for your circle. Not only does everyone need their own physical kart (only sold through the full bundle), but each person needs their own Switch console, whether it’s a standard Nintendo Switch or a Switch Lite. If you do fill those requirements, joining a session is fairly easy, as one person acts as the host, meaning the data of their course, including all customizations, is transmitted to the other players. Once in a multiplayer session, you can compete in a multi-race Grand Prix or in regular head-to-head races.

Despite being able to play with your Switch in TV mode with either a Pro Controller or two Joy-Cons, Nintendo recommends playing in handheld mode for the best connection since you don’t want the kart to venture too far from the Switch unit it’s communicating with. Since the kart communicates directly with the Switch, you should remain within a 30-foot radius, though for the best experience, keeping it within 15 feet is the advisable distance. 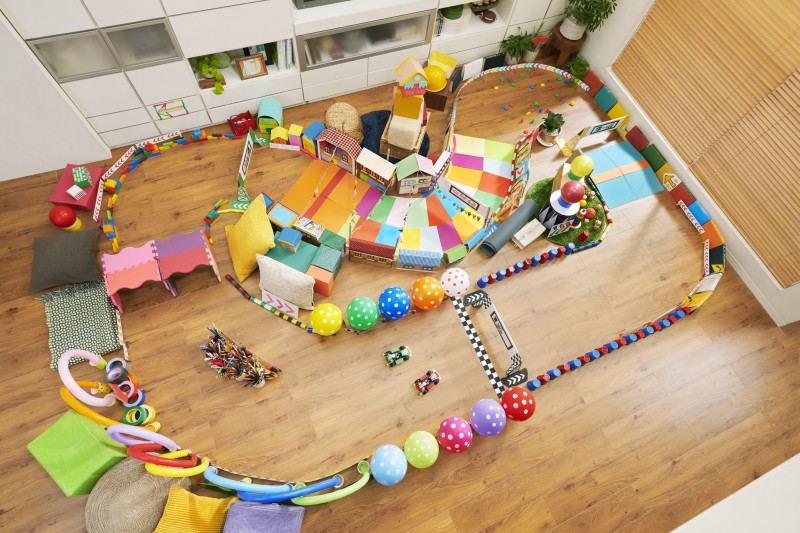 Each kart takes between three and a three and a half hours to fully charge from a completely depleted state. Once the battery is fully charged, faster speeds eat through your battery life quicker; 150cc gameplay will kill your kart’s battery in about 90 minutes, while slower speeds will let the battery last a bit longer. Nintendo also only recommends you play indoors, as the kart features soft tires, low clearance, and traction built for smoother surfaces like hardwood floors. However, you can use the kart on carpets (with slower results due to the softer surface), but longer shag or any kind that will get caught in wheels could present a problem.

A Live-Action Destiny Movie Would Be A Mistake

Warhammer 40,000: Chaos Gate – Daemonhunters: How To Augment Your Knights