No matter which TTRPG you run, every Game Master is in a constant battle with the unknown. You can run a game in your personal homebrew world, a place you created and therefore rule, and your players will still find a way to explore the one house you never thought to map out. Or you can stick to official hardcover adventures like the recently-released Rime of the Frostmaiden for safety. But even the Dungeons & Dragons team admits that not every player action can be accounted for, and encourages a sandbox approach to running games.

So how do you as a Game Master prepare for the random? What do you do when the party decides to ignore the all-important fortress you set up for them and go digging up the graveyard instead? That’s where a new book called The Game Master’s Book Of Random Encounters comes in.

The Game Master’s Book Of Random Encounters is now available as a hardcover tome. The cover is meant to evoke an old bound spellbook, complete with art depicting magic circles and arcane symbols. Inside one will find sketched black-and-white maps, NPC stat blocks, and plenty of tables that use die rolls to decide what happens next and where. 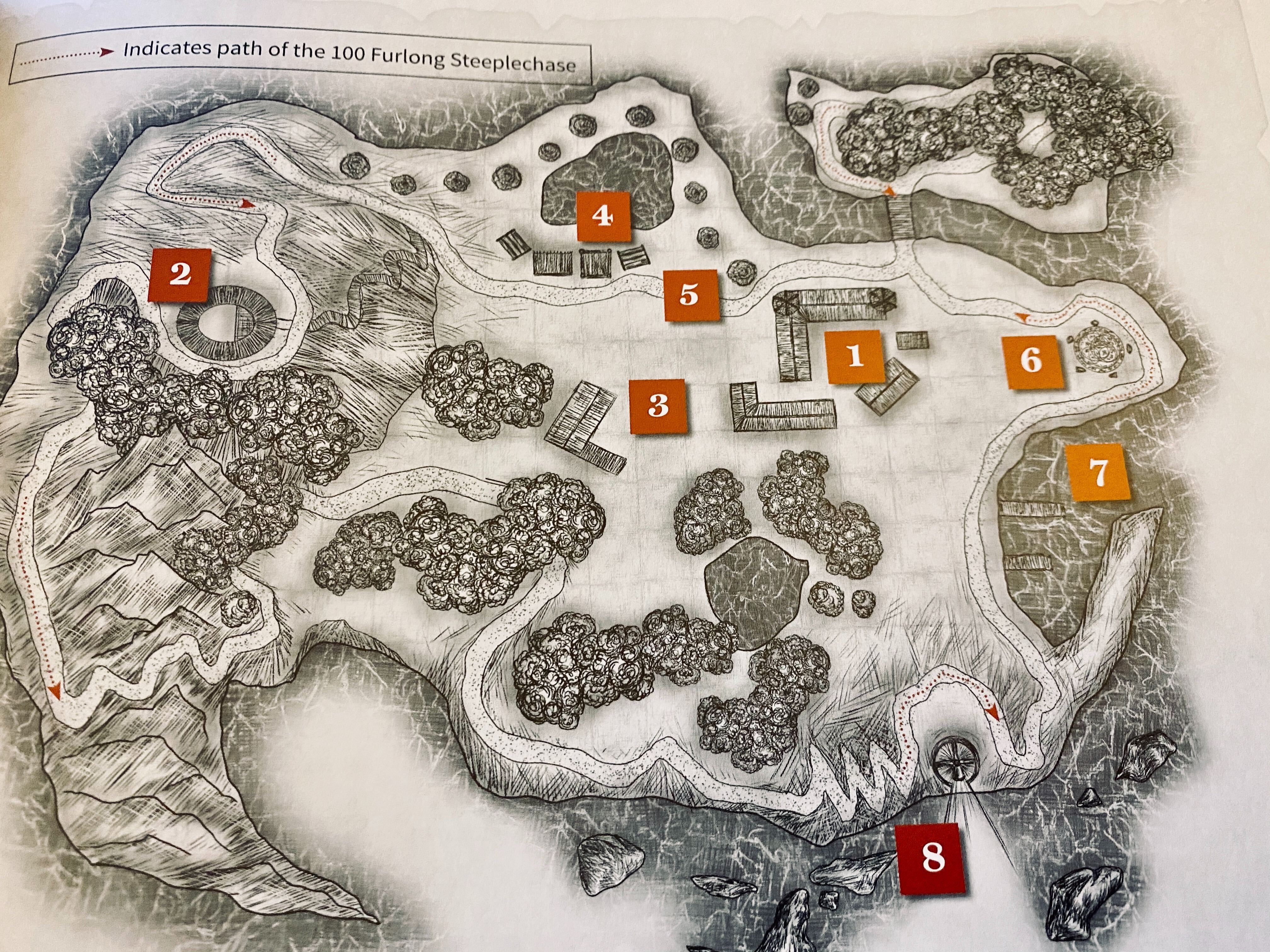 The setup will be very familiar to D&D fans, however the Book of Random Encounters also takes care to maintain its own aesthetic. Red is the primary color here, with most important text and tables using some shade of it. This gives the impression that, while the book was designed for D&D 5th Edition in mind, it is still trying to stand as its own product.

Many things do give away that this is a D&D companion piece at heart. The bulk of the book is dedicated to eight one-shot adventures and several plug-and-play locations. Think generic creepy crypts, trap-filled hideouts, and colorful alchemy labs. Alone, these locations and the NPCs encountered within could work with Pathfinder or any other fantasy RPG. But the book makes use of DCs, Duergar, and other telltale bits of D&D lore and mechanics. This isn’t a bad thing, mind you, it’s just to say that GMs of other systems might need to put in a little extra work to convert some elements found in this book.

One thing is entirely universal, and tons of fun, are the random generators at the back of the book. 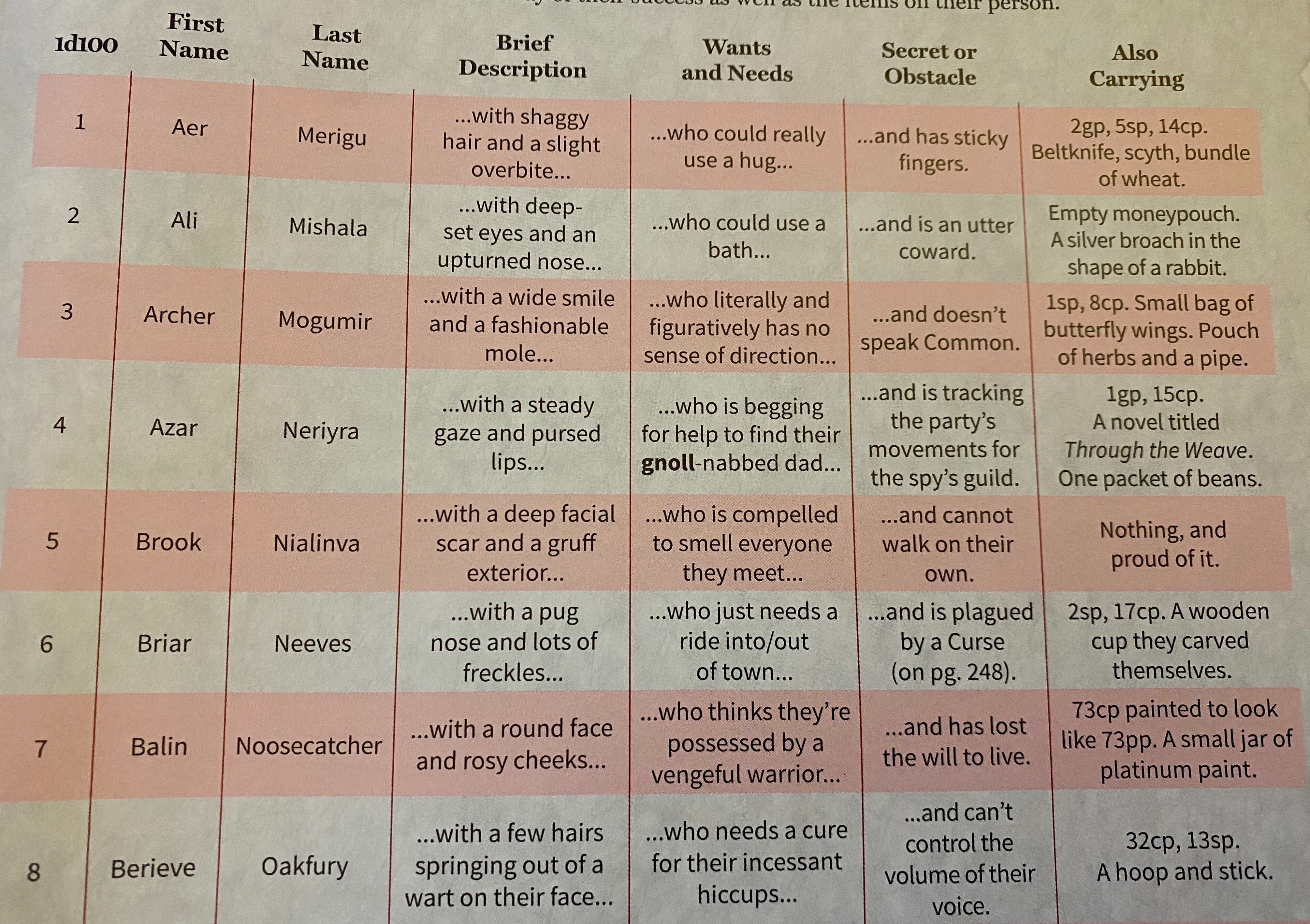 The best of this section is a collection of tables that create a fully-realized NPC. In just a few rolls, you’ll know what race they are, what pronouns they prefer, their physical appearance, and any weird quirks they might have. If your players are the type to kill NPCs and loot them, there are even tables for deciding what the poor soul was carrying. This table is 100 entries strong and spans several pages.

Also of note is a random tavern generator. Taverns are a common sight in D&D, and it’s easy for them to blend together over a long campaign. The Book of Random Encounters has tables full of names that can be combined, as well as one for how lively the place is. The icing on the cake is a table that decides the “vibe” of a tavern, filling in some of the sensory descriptions that can give a location life. Does it smell like sawdust, have a dress code, or is it filled with bizarre illusions? The tables will decide so that you can focus on working out the mechanics of the big upcoming boss fight.

And that’s really what this book is about. Some of the most memorable moments of a TTRPG campaign come from the spaces in between major plot points. Players reminisce on the inappropriate tavern antics and silly shopping trips just as much (if not more) than they do the big plot twist. But making every tavern in every town worthy of memory is an exhausting task. And frankly, many Game Masters don’t have that kind of time. The Game Master’s Book Of Random Encounters gives you all the taverns, temples, and timeless NPCs you can dream of in a few dice rolls. If you plan to be a Game Master for a while, it’s a solid investment at $22.99.

A copy of The Game Master’s Book Of Random Encounters was provided to TheGamer. It is available now through most major book retailers.

Add Another Year To Your PlayStation Plus Subscription For $33