Rani Therapeutics today raised $69 million to fund development of its platform that converts injectable drugs into pills. The San Jose-based company specifically plans to accelerate clinical development of its internal pipeline treatments and scale up manufacturing, in partnership with pharmaceutical companies including Novartis and Takeda.

Fear of or discomfort from needle-based injections are among the reasons patients refuse to take certain medications. According to a review in the Annals of Internal Medicine, 20% to 30% of medication prescriptions are never filled and approximately 50% of medications for chronic disease aren’t taken as prescribed. This lack of adherence is estimated to cause approximately 125,000 deaths and to cost the American health care system between $100 billion and $289 billion per year.

It’s the assertion of Rani that its technology has the potential to transform markets where patients have to endure frequent injections. The startup claims its platform is capable of creating “orally available” — i.e., administered by pill — therapeutic antibodies, peptides, proteins, and more.

Rani’s “robotic” capsule, which packs a built-in sensor, moves through the stomach where acids typically break down drug molecules. Once it reaches the intestine, it delivers the medicine it contains by inflating like a balloon and injecting the drug into the intestinal wall. To prevent the balloon from inflating prematurely, the capsule has a pill coating that dissolves when it experiences the acid levels in the intestine. 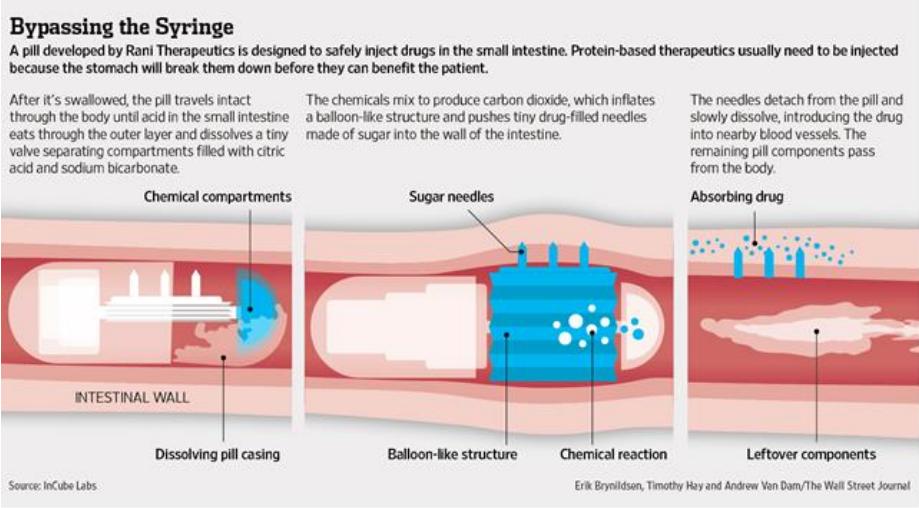 Rani says it’s trialed multiple molecules on its platform, including its own treatments and several compounds from pharmaceutical partners. To date, however, the company has only completed a Phase I study with octreotide, a drug that can treat diarrhea associated with certain types of tumors and lower levels of excess growth hormone for patients with acromegaly, a disorder characterized by the enlargement of face, hands, and feet. Phase I studies, which don’t test for efficacy, find the highest dose of treatments that can be given safely to people without causing severe side effects.

Rani reported that the mid-2019 octreotide trial showed rates greater than 70% of bioavailability, the portion of a drug that enters circulation when introduced into the body.

Mir Imran, a prolific entrepreneur who contributed to the development of the world’s first implantable cardiac defibrillator, founded Rani in 2012 out of InCube Labs, an applied research institute he launched in 1995. Imran believes that the technology has applications in the treatment of chronic diseases including diabetes, rheumatoid arthritis, Crohn’s disease, multiple sclerosis, and osteoporosis, among others. But the proof will be in the publication of future peer-reviewed studies showing that Rani’s pill can deliver drugs as efficiently and effectively as hypodermic needles.

“Rani has the potential to transform major markets where patients must endure frequent and often painful injections,” Imran told VentureBeat via email. “With this breakthrough platform, capable of creating orally available therapeutic antibodies, peptides, and proteins, we could impact millions of patients worldwide.”

The series E funding announced today brings Rani’s total raised to $211 million. Previous investors include GV (the investment arm of Google parent company Alphabet), Novartis, and AstraZeneca. Novartis is a strategic investor; alongside collaborators like Takeda, it plans to evaluate Rani’s technology for potential licensing in the future.

Square Enix To Announce Multiple Games In Next Few Months