Fortnite players in China could soon be getting messages telling them to stop playing after three hours. This is part of the country’s clampdown on gaming addiction, and follows a previous law that stops children from gaming at night.

The new v12.10 update was just released for Fortnite, and with it came some bug fixes and the new proximity mine. As usual, data miners have been going through the files to find interesting content, and one of them came warning messages telling players to stop playing after a certain amount of time. The sting also includes the line “TencentPlayTimeLimit”, which indicates that this warning is probably for the Chinese market only.  Tencent is the company that publishes Fortnite in China and has a stake in Epic Games.

RELATED: Fortnite: Where To Find The Legendary Hunting Rifle During Season 2

According to Dexerto, the strings were found by a leaker called FireMonkey who posted the following warnings.

“You have been online for 3 hours accumulatively. The in-game gainings will be lowered by 50% from now on and challenge progress has been disabled. For your own health, please log-off and get some rest. Appropriate physical exercise is good for your body.” 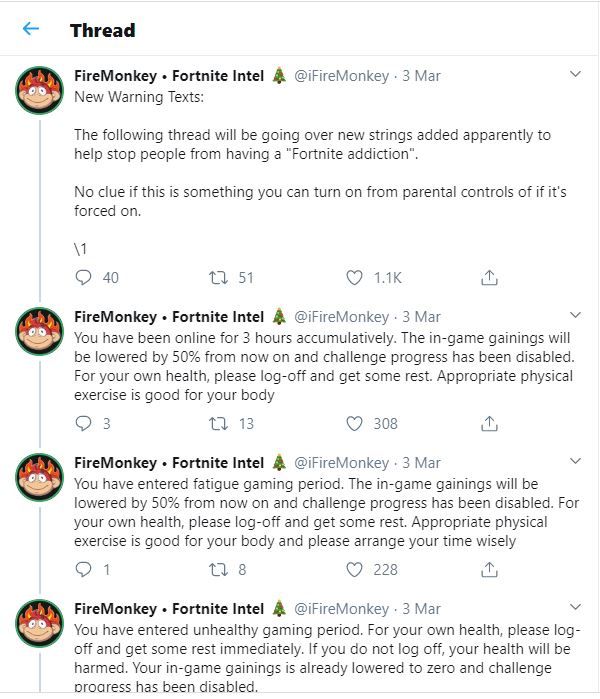 If players still don’t log off they will get another message saying, “If you do not log off, your health will be harmed. Your in-game gainings is already lowered to zero and challenge progress has been disabled. It will not return to normal until your accumulative offline time reaches 5 hours.”

While these warnings might seem extreme, it wouldn’t be the first time that the Chinese government has taken a strong stance against online gaming. Last November they imposed curfews on minors playing games. Gamers below the age of 18 are banned from playing games between 10 pm and 8 am. During the week they are only allowed to play for 90 minutes a day, which gets increased to three hours on weekends and public holidays. There are also limits on how much players can spend on online games in a month ranging between $29 and $57 dollars.

It can be argued that these addiction warnings aren’t really a ban. However, having in-game earnings cut by 50% and having challenge progress disabled could be a big deterrent to players wanting to make progress in the game. Of course, players could just switch to playing another game that doesn’t have any warnings and continue to grind it out.

It remains to be seen if these addiction warnings will actually come into effect at some point. Considering China’s stance on “gaming addiction,” it wouldn’t be surprising at all. If they do go ahead with it, there may be serious implications for other games. After all, Tencent owns Riot games, and the last thing players want are restrictions on League of Legends or the upcoming Valorant.

Zayac interview: “Techies is the most strategic hero”

Riot Games is entering the Fighting Game world: What might happen? – Esports Insider

[UPDATE] Fortnite Is Back Online, Rewards Planned For Next Week