For the first time in its eight-year history, Counter-Strike: Global Offensive has hit 1 million concurrent players.

CS:GO is the most popular game on Steam and continues to rise in popularity. This can be attributed to the game being free-to-play since 2018 and the release of a battle pass in 2019. It has been breaking its own records steadily in the last couple of months and hit 876,575 users in early February, breaking the previous record of 850,485 players set during the MLG Columbus major tournament in 2016. By the end of February, it broke its own record again, this time hitting 924,045.

According to Dexerto, the game passed the 1 million concurrent players mark on March 14 with a peak of 1,001,756 players. CS:GO has an average of over 11 million players a month and a consistent concurrent player count that normally sits above 500k at any given time. Just last year, Dota 2 was the online game with the most users, but that number has been in constant decline, leaving the door open for CS: GO to take the top spot. 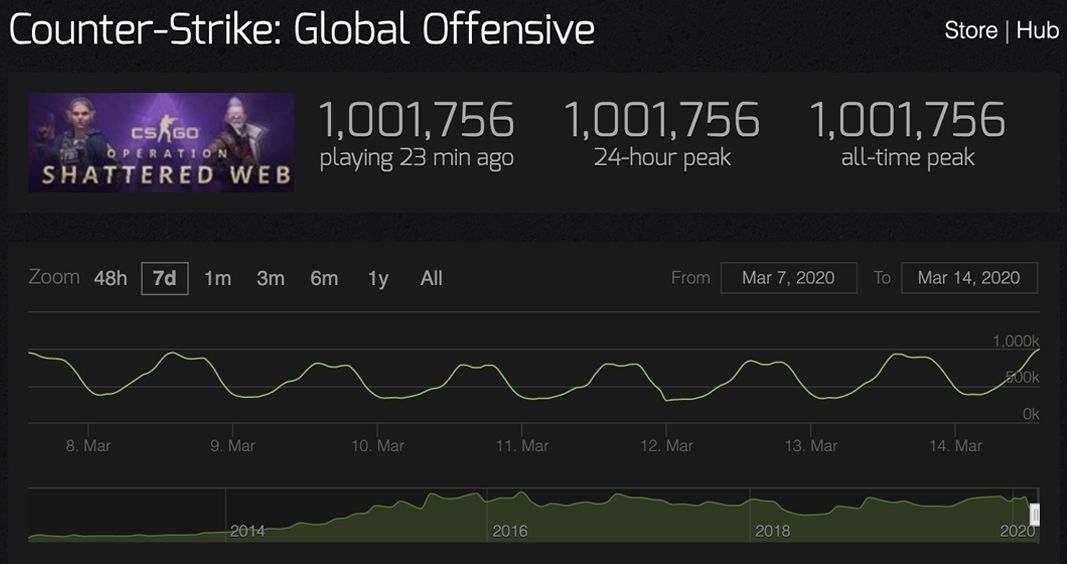 One of the main reasons being attributed to the massive player count is the fact that many people around the world are now staying home due to the Coronavirus pandemic. In some areas, people are under forced quarantine which gives them more time to play games. It’s not just a coincidence that the records are being set during the peak evening gaming hours in China.

It isn’t just CS:GO that’s breaking records. As more people stay home, there have been more players overall and Steam also broke its concurrent record, hitting 20 million users for the first time. Of the 20 million players on Steam, 6.2 million were actually in-game with the others just online.

With the new record, CS:GO becomes only the third game ever to pass the 1 million player barrier, after Dota 2 and PUBG. It shows no sign of letting up, even with new free-to-play games like Call of Duty: Warzone now on the market, and Valorant expecting to drop soon. It will be interesting to see if the increase in players can continue after the coronavirus pandemic ends, or if the figures will get back to normal.

Dying Light 2: How To Keep Your Immunity Up During Night

Assassin’s Creed Valhalla: A Guide To All Of The Daggers