Getting grenade line-ups in Counter Strike: Global Offensive right can be the difference between a win and a loss. If you've watched professional matches, you'll see pro players throw their utility at seemingly random corners, yet, it lands in the right place.

Pro players have calculated spots where they throw their Smokes, HE Grenades, Flashbangs, and Molotovs, to ensure that they're utilised. This allows the players to use their abilities without peeking into an unsafe corner or pushing. This guide will cover the ideal nade spots, and though they take time to learn, discovering the right spots to throw utility will be a definite advantage.

HE Grenades, Smokes, Flashbangs, Or Molotovs? 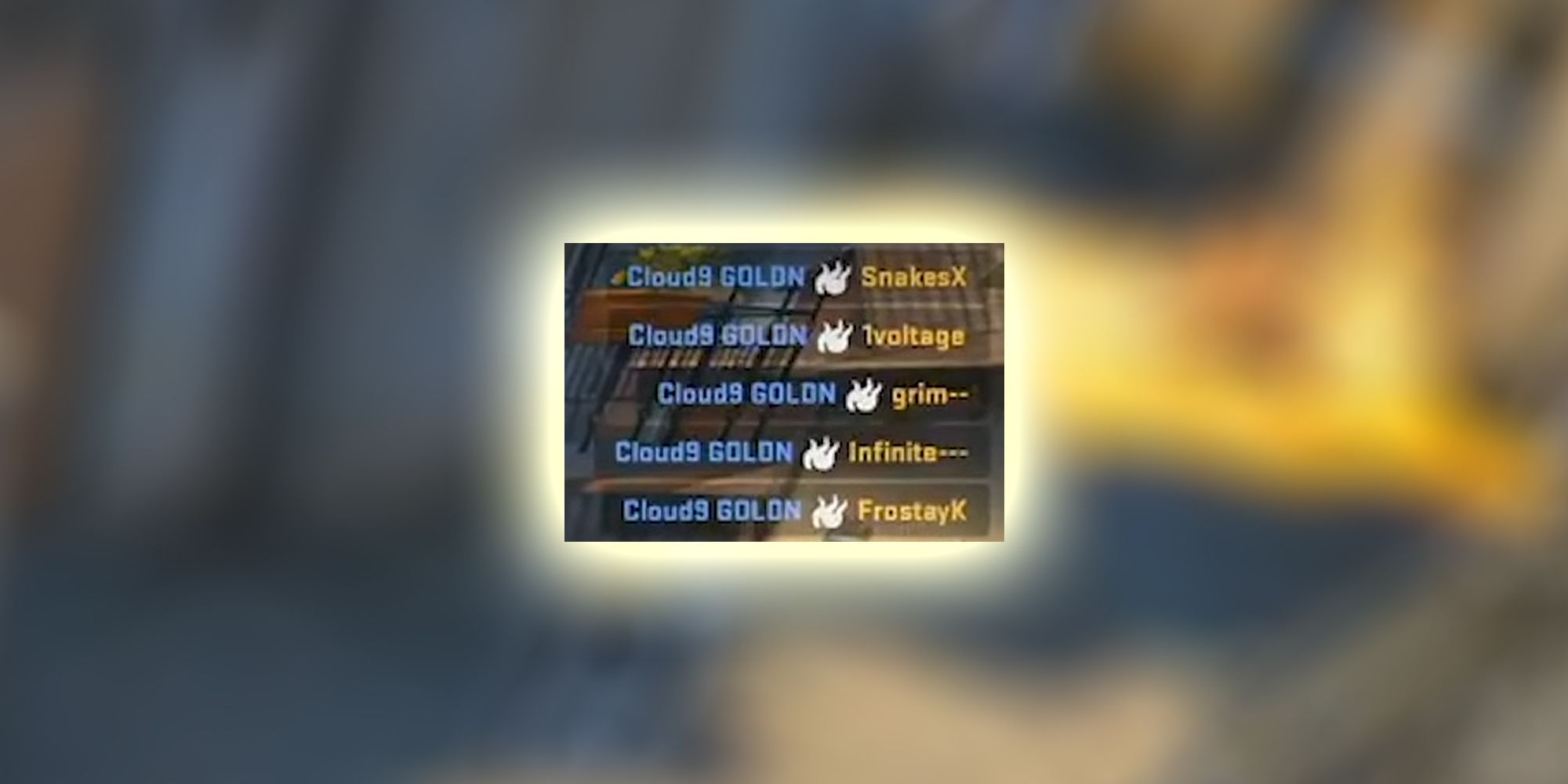 All CS:GO utilities are incredibly powerful and can make a game-changing difference. Above, we see a screenshot of the professional player, Golden, getting an ace just by using the Molotov Grenade. This article covers a variety of lineups for all four grenades in CS:GO. The purpose is to show you lineups that are easy to try and simple to refer to and remember. If you'd like to see a more detailed guide and find out how to cover almost every spot on Dust 2, ensure that you read our Smoke guide here.

If you struggle to see the crosshair on any of the images below, please click the image to zoom in and see the exact placement.

How To Practice Your Grenades In CS:GO 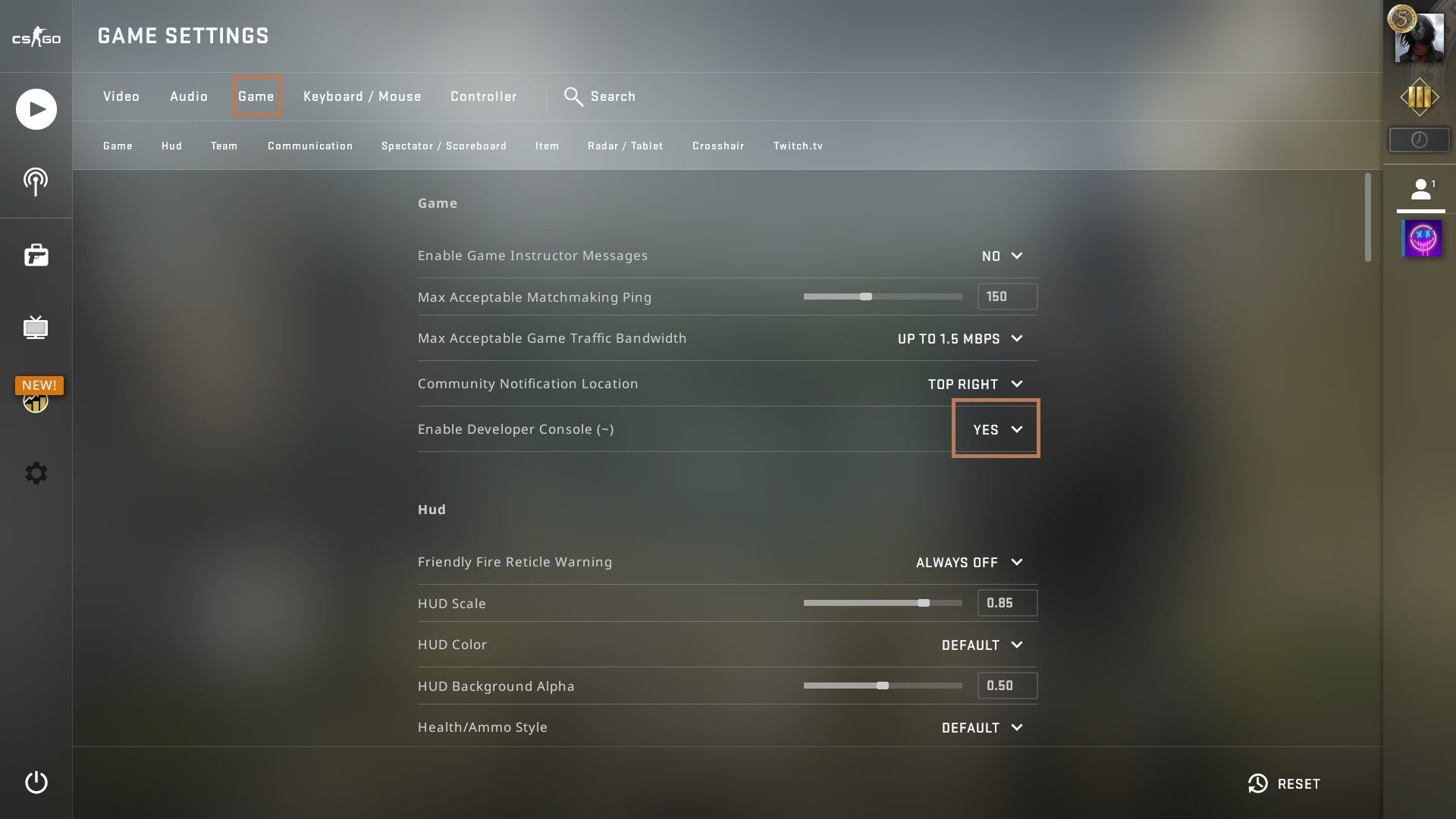 Before you try the new lineups, it's advisable that you test them in a custom game first. Utilities in CS:GO are expensive, and you don't want to throw a grenade at yourself by mistake (if someone claims this hasn't happened to them while trying a new lineup, there's a chance they're lying).

To join custom matches that are set up for practicing your gameplay, it's ideal to enable Developer Console. Developer Console is a window that will pop up on your screen when you press the '~' button once enabled (or a different button, if you change your settings). There are various commands which will change your game settings if they're typed into this window. For practice purposes, you can allow cheats.

How To Enable Developer Console In CS:GO 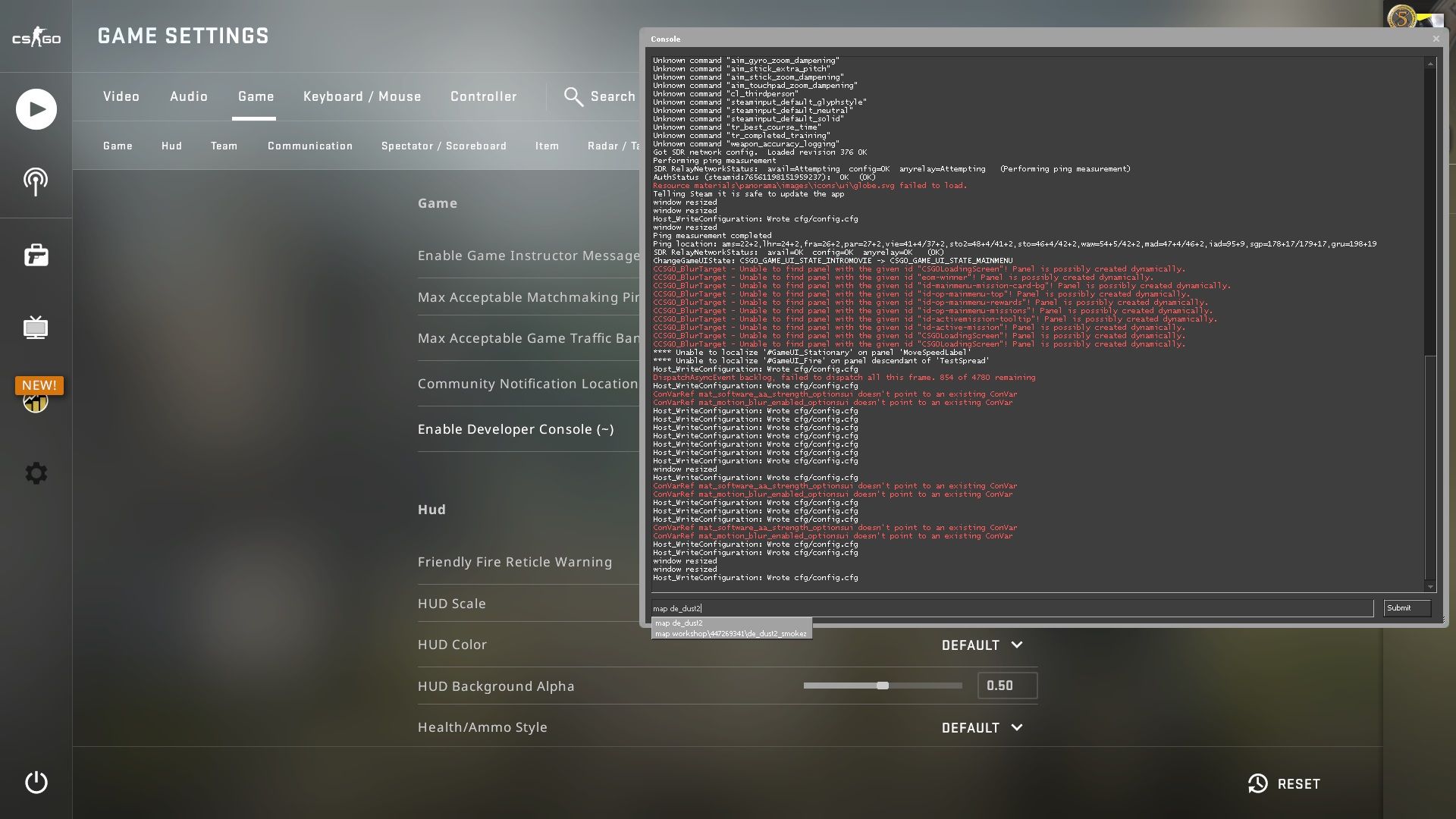 Which Commands To Put In Developer Console?

It is recommended to utilise Developer Console for custom settings such as mouse sensitivity, crosshair, viewmodel, and more. For the purpose of practicing grenade spots on Dust 2, we want to enter the following:

Enter each command in your console separately by hitting enter after each entry.

Grenades For B Site Attack And Retake

Popflash For Dust 2 B Site 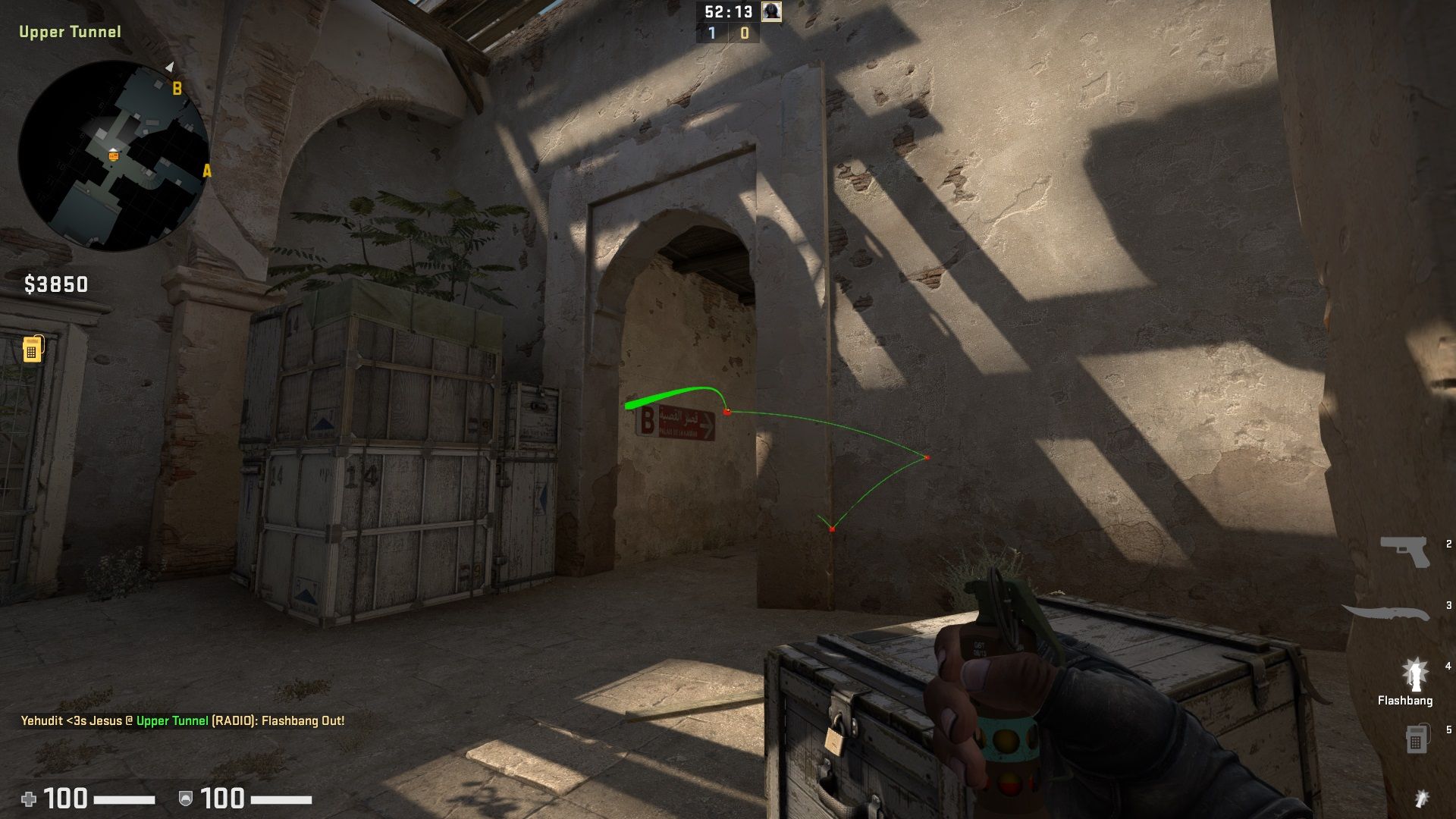 If you want to use what's called a 'pop-flash' to attack B Site, you can enter B Main and stand against the pillar opposite the box shown in the image above.

Aim your crosshair to the right of the red 'B' sign. Run a short distance and throw. The Flashbang will detonate almost instantly, rather than taking a while and giving opponents time to turn around and avoid being flashed. This is the purpose of using a pop-flash. 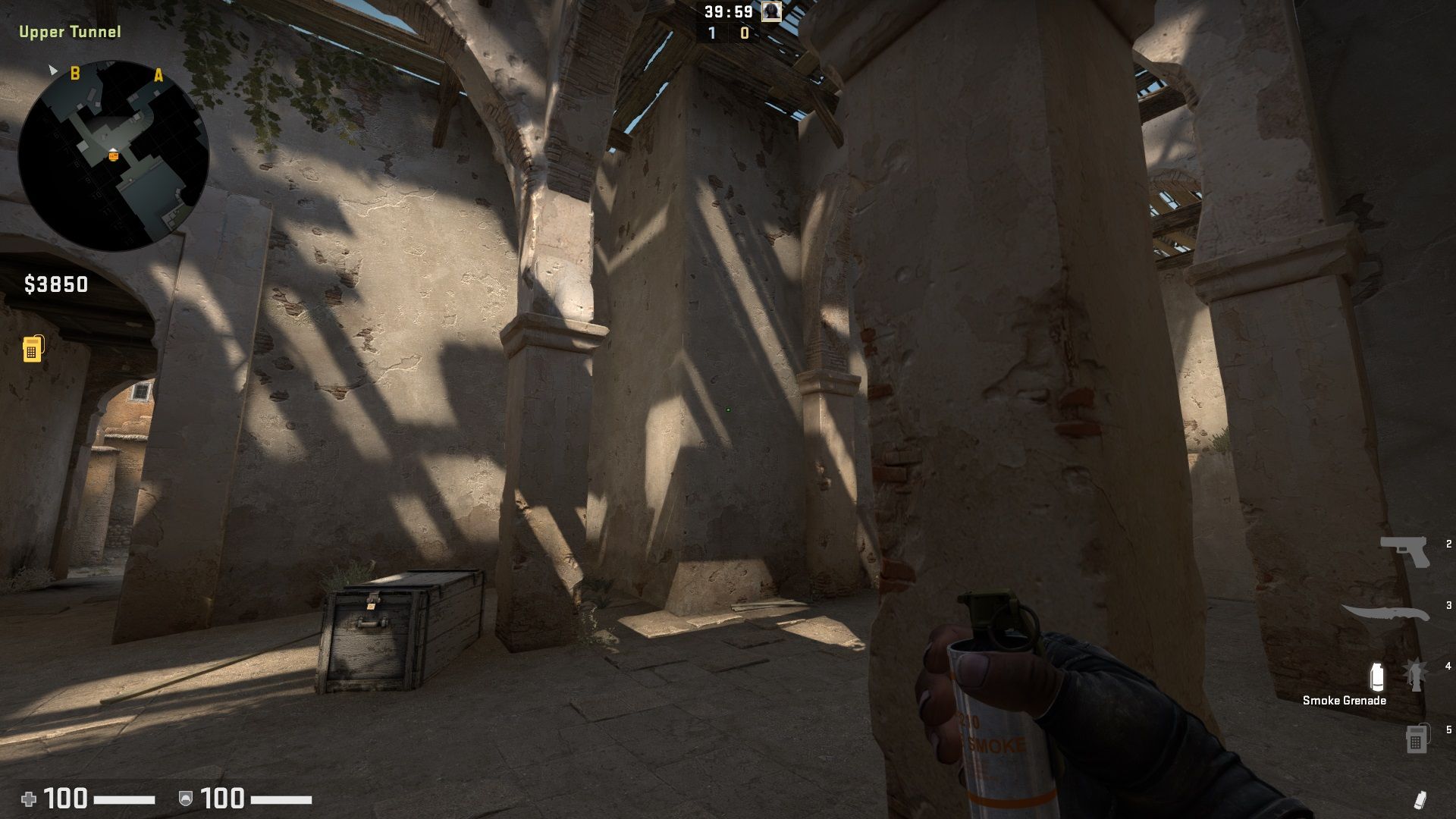 Stand behind the pillar, right in the corner. 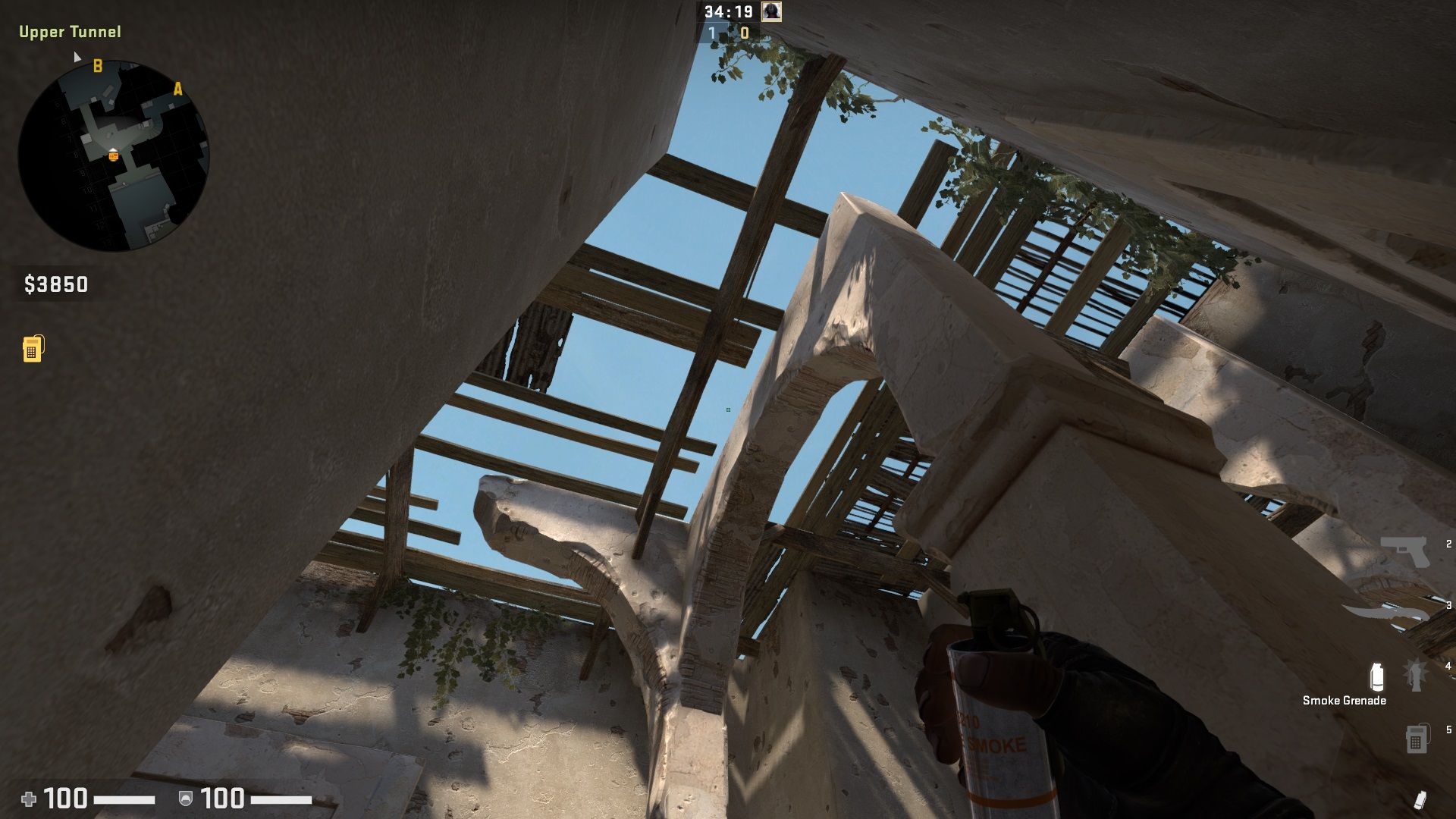 Look up and aim between the planks of wood as shown above, and throw your Smoke Grenade. 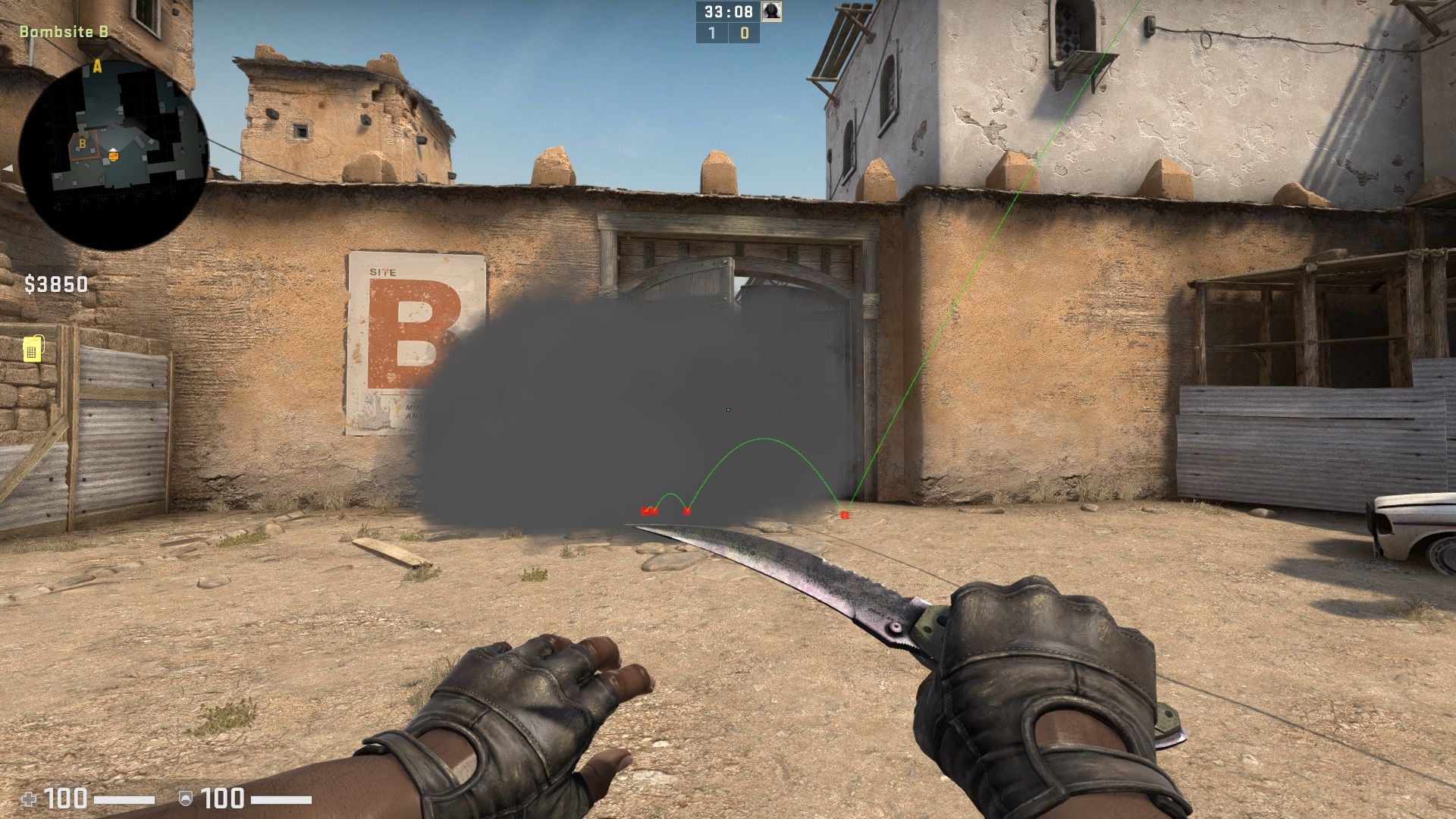 This lineup will cover the main area that should be smoked – Double Doors. It will protect you and your team from anyone peaking outside of B Doors, Mid Doors, and CT Spawn. 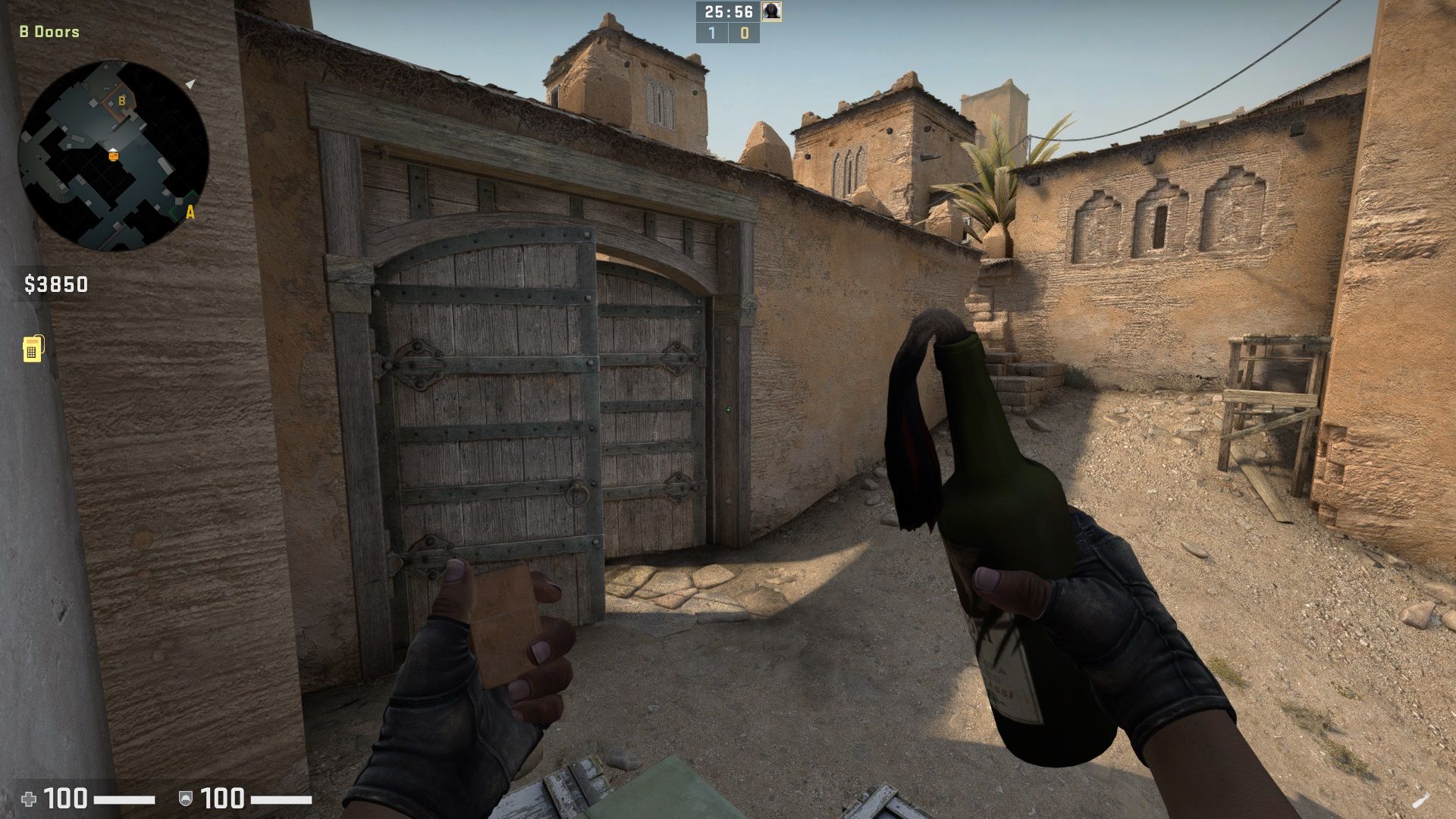 If you find yourself in a situation where you are executing a B push from CT or retaking the site, you may want to Molotov backsite to clear the area. Stand on top of the box in the corner outside B Doors. Aim your crosshair on the door frame in between the two dots, on the middle dot. Jump and throw over the wall. 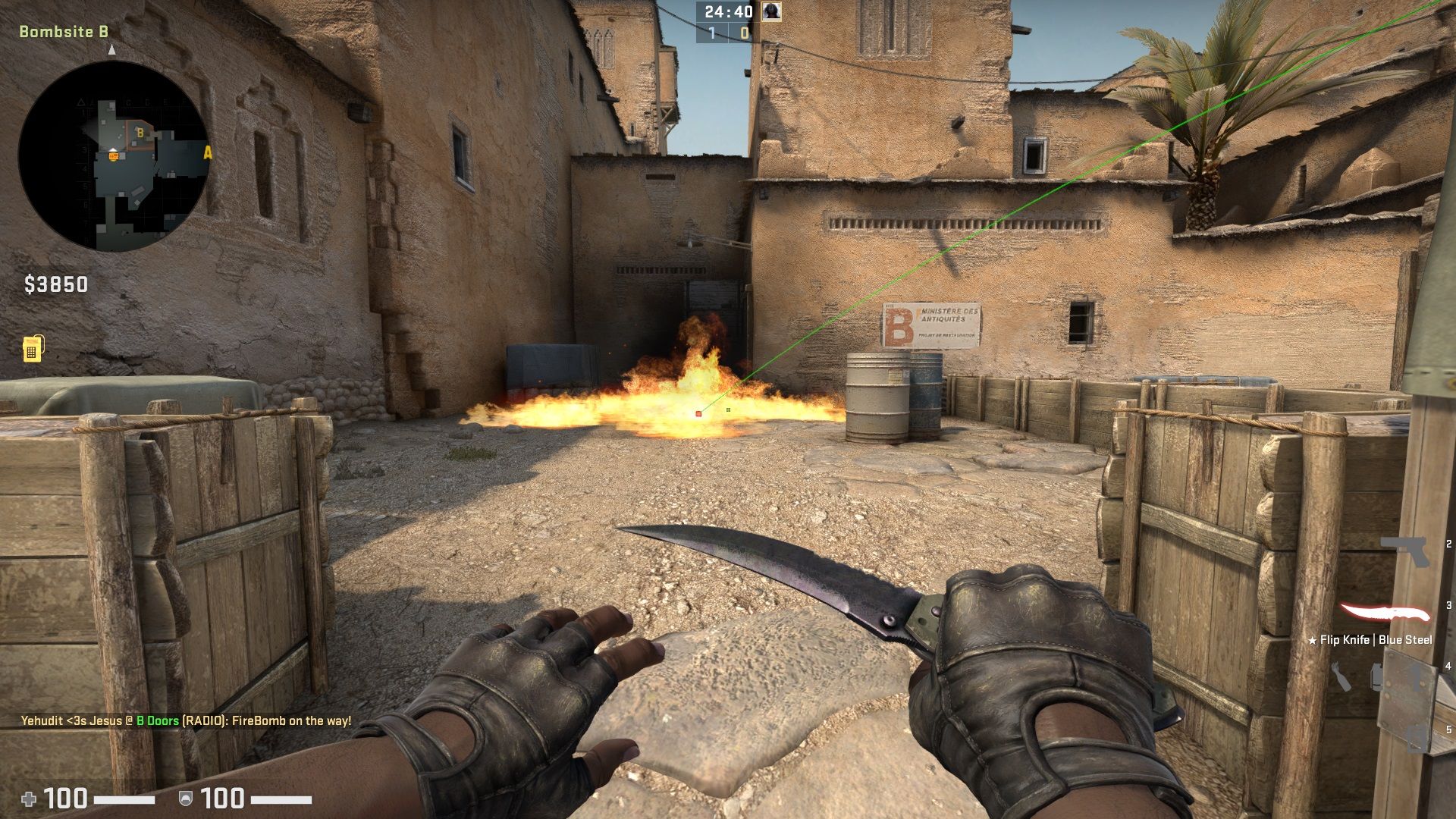 It may take a bit of practice, but ultimately your Molotov will land at the back of B Site. This may be especially helpful if there is an awper on site, camping the spot.

HE Grenade For B Backsite 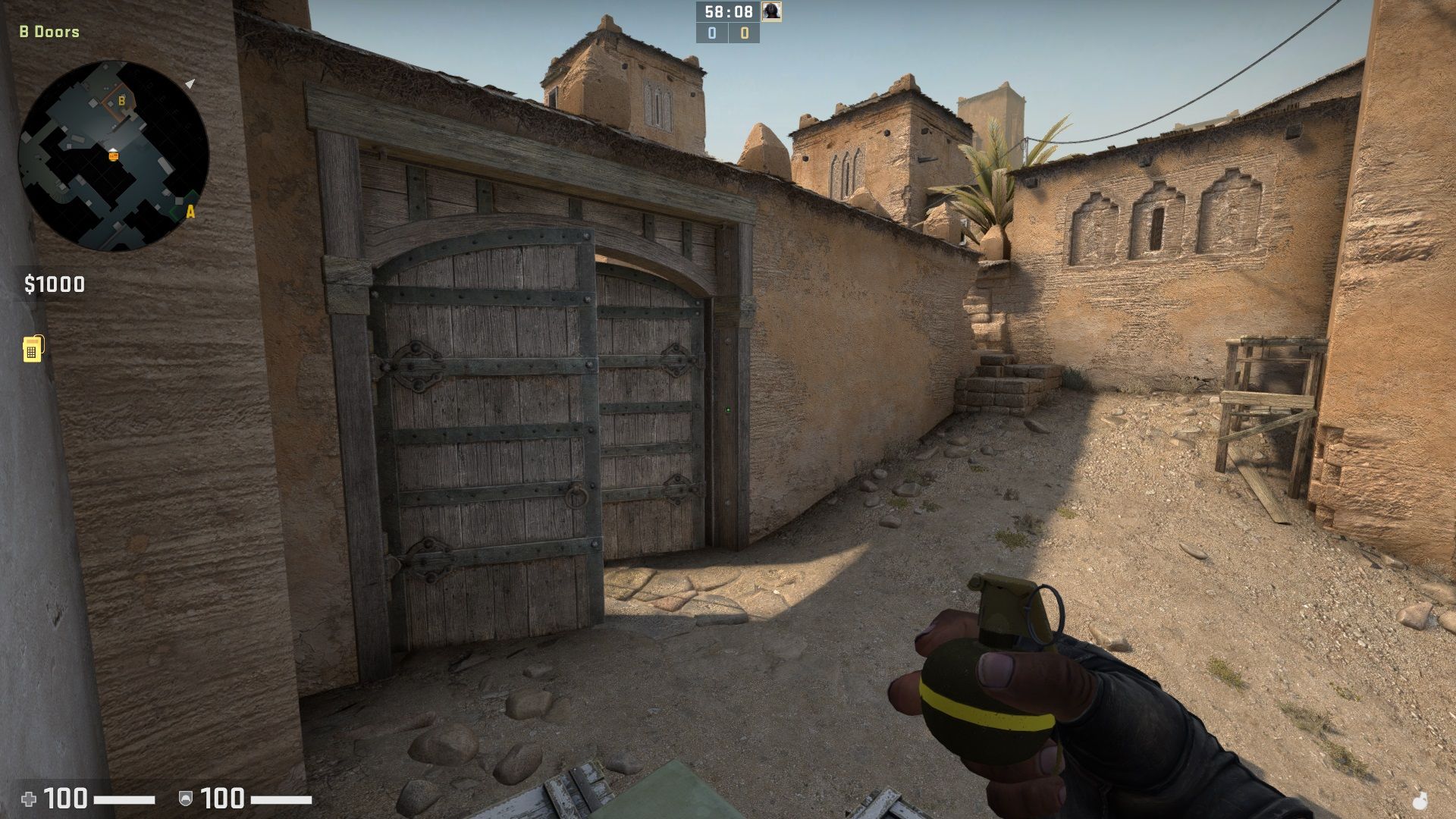 The exact same lineup as above can be done with an HE Grenade. The grenade will explode before it lands, causing damage to anyone nearby.

Grenades For Mid Attack And Retake 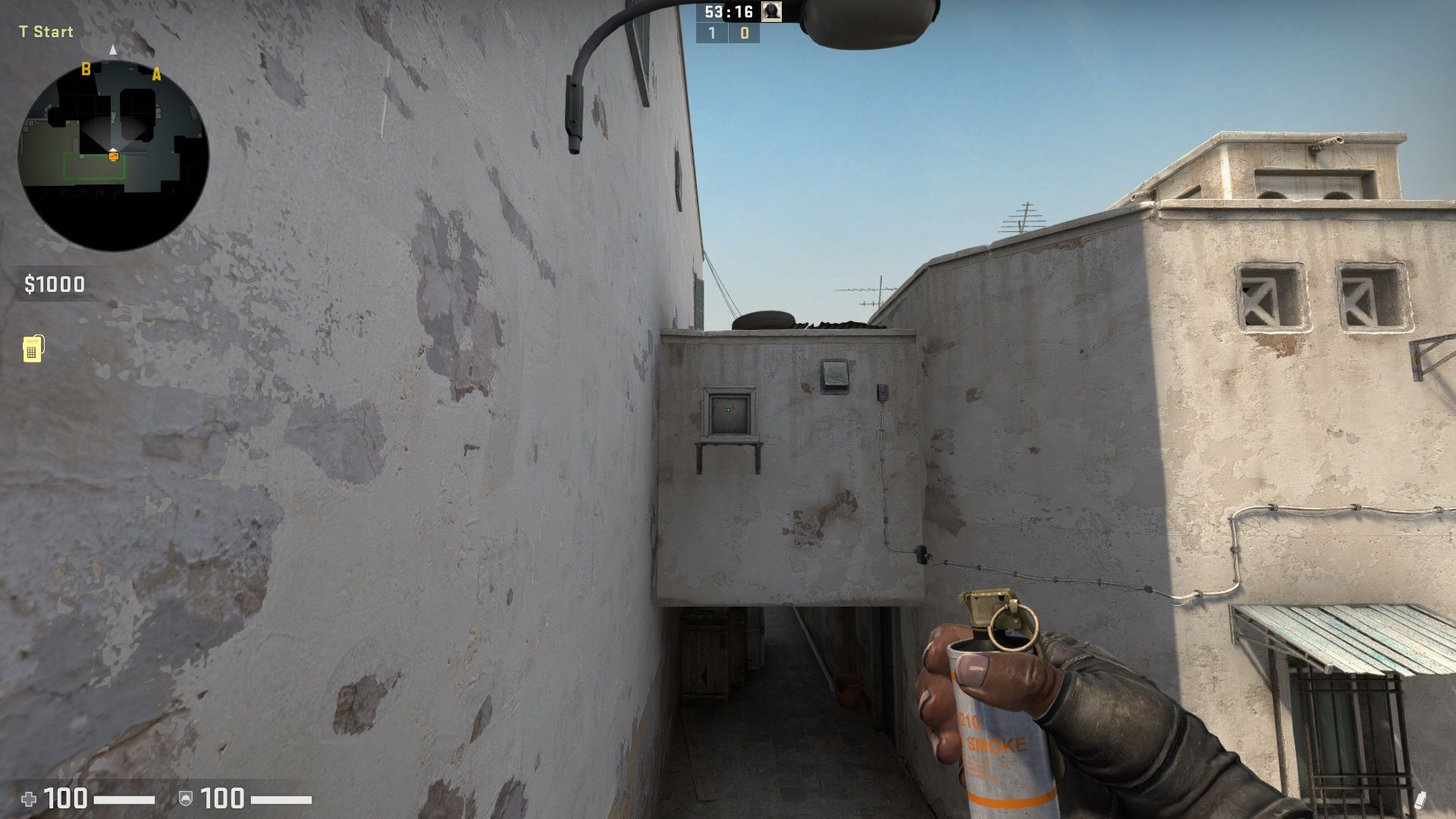 In spawn, stand against the short fence facing Mid, and aim at the upper half of the 'square' on the wall. Jump and throw your Smoke over the wall. 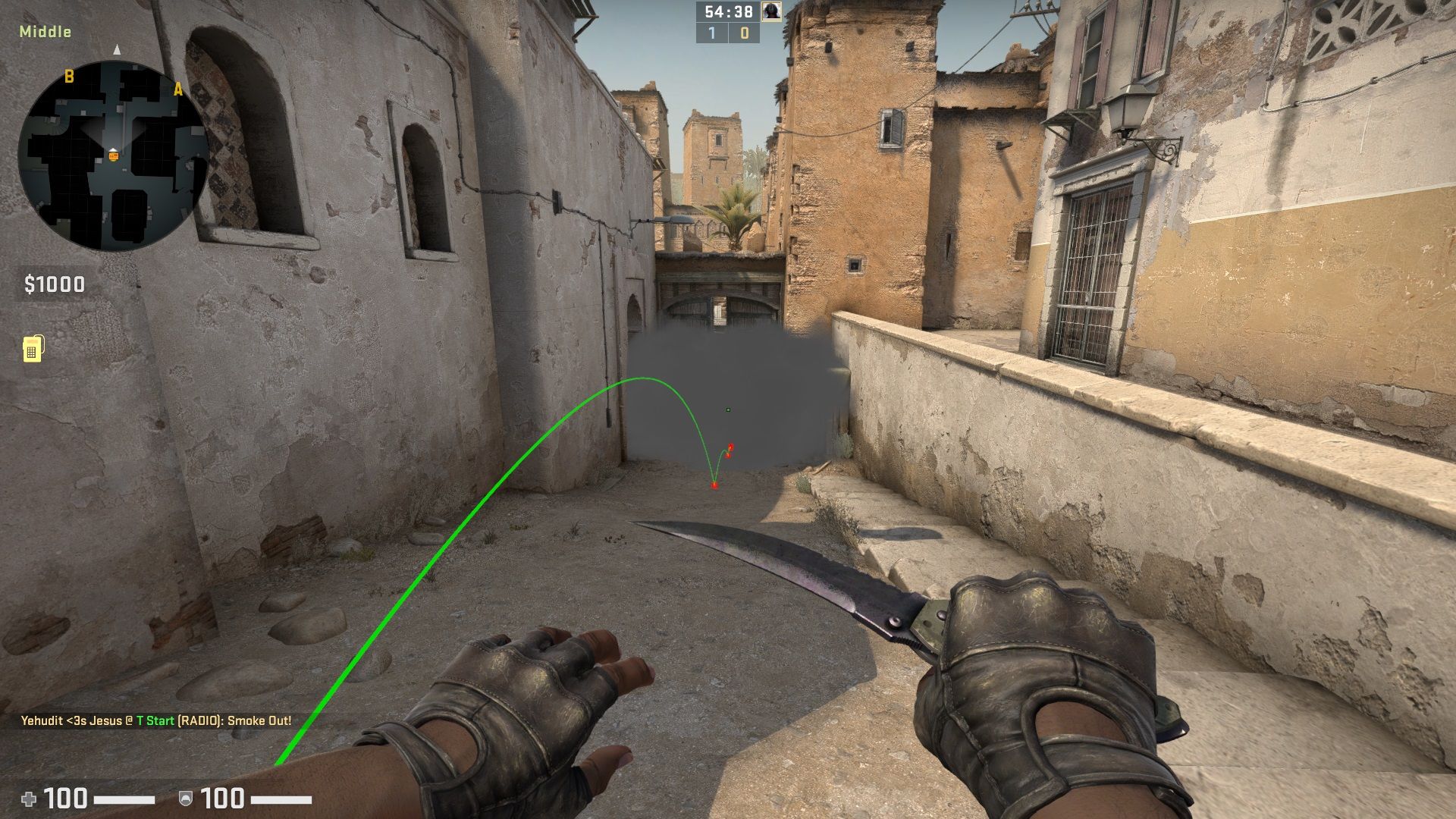 Now you and your team can move around mid freely, as Mid Doors are smoked. 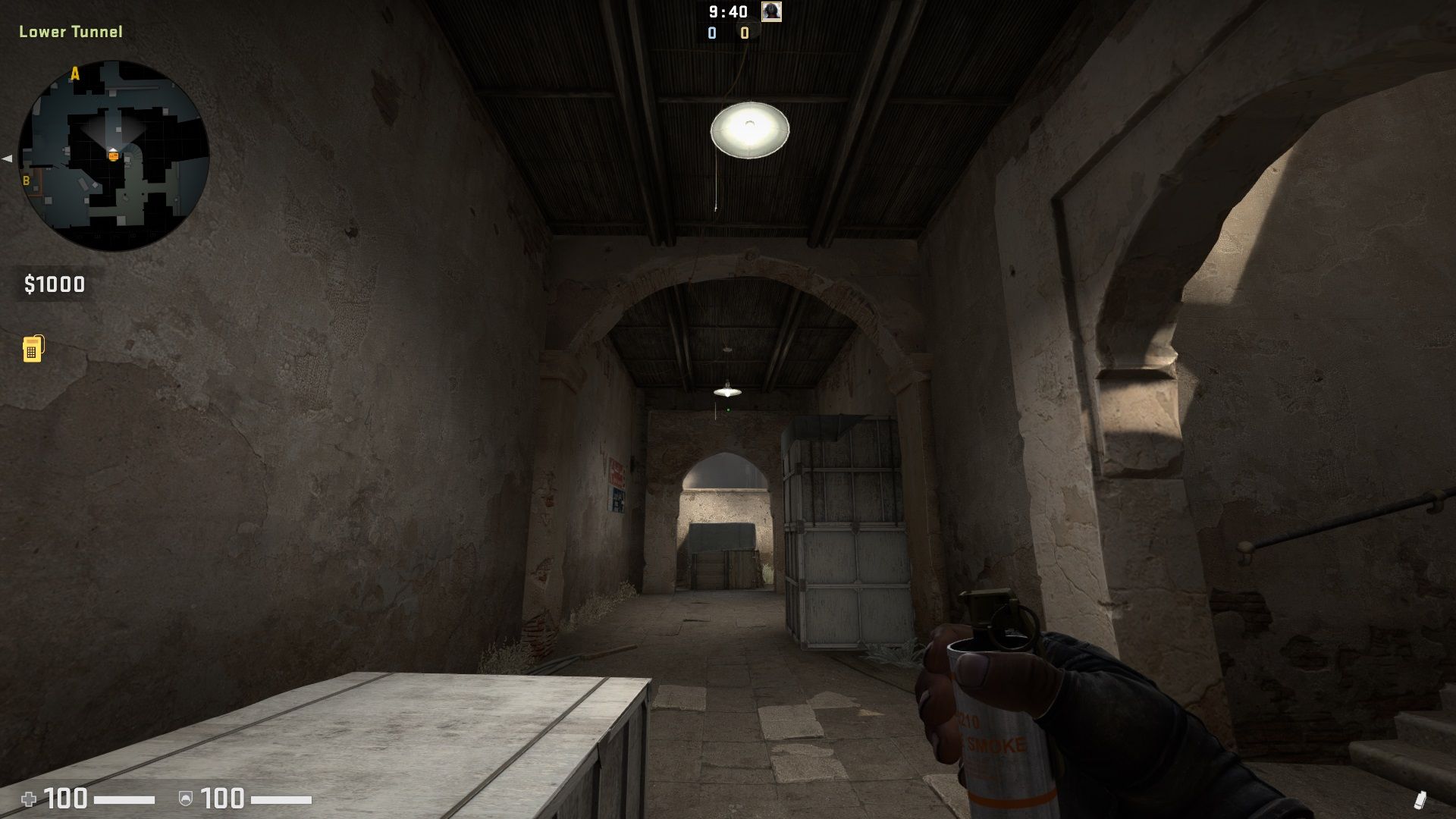 This smoke is deployed from Lower Tunnels. Stand on the right of the boxes in Lower Tunnels. Aim at the 'line' on the wall, right below the lamp, and throw your Smoke. 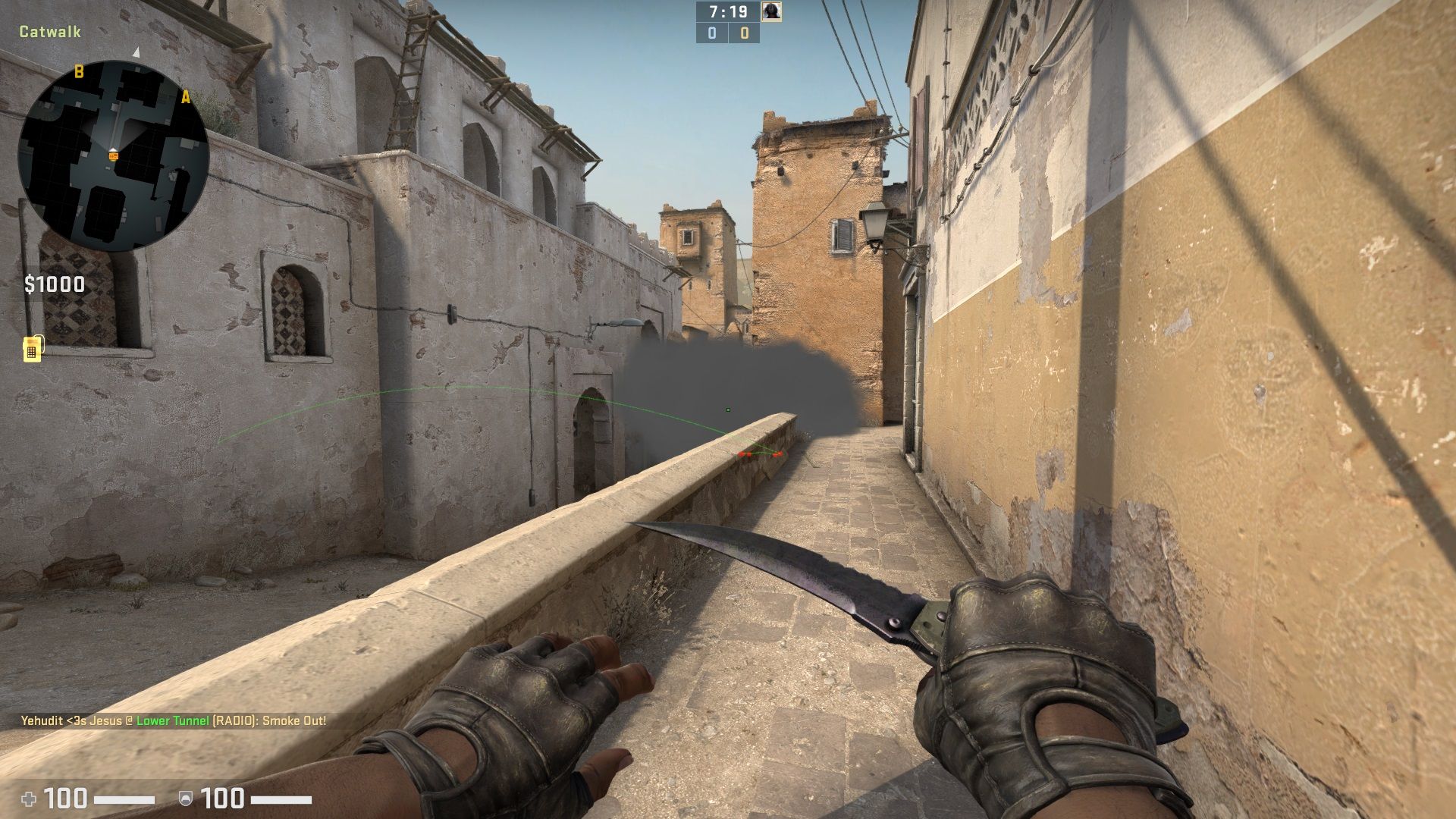 Using this smoke, your team is able to push A Short without fearing the peak from Mid Doors.

Smoke CT For A Mid To B Push 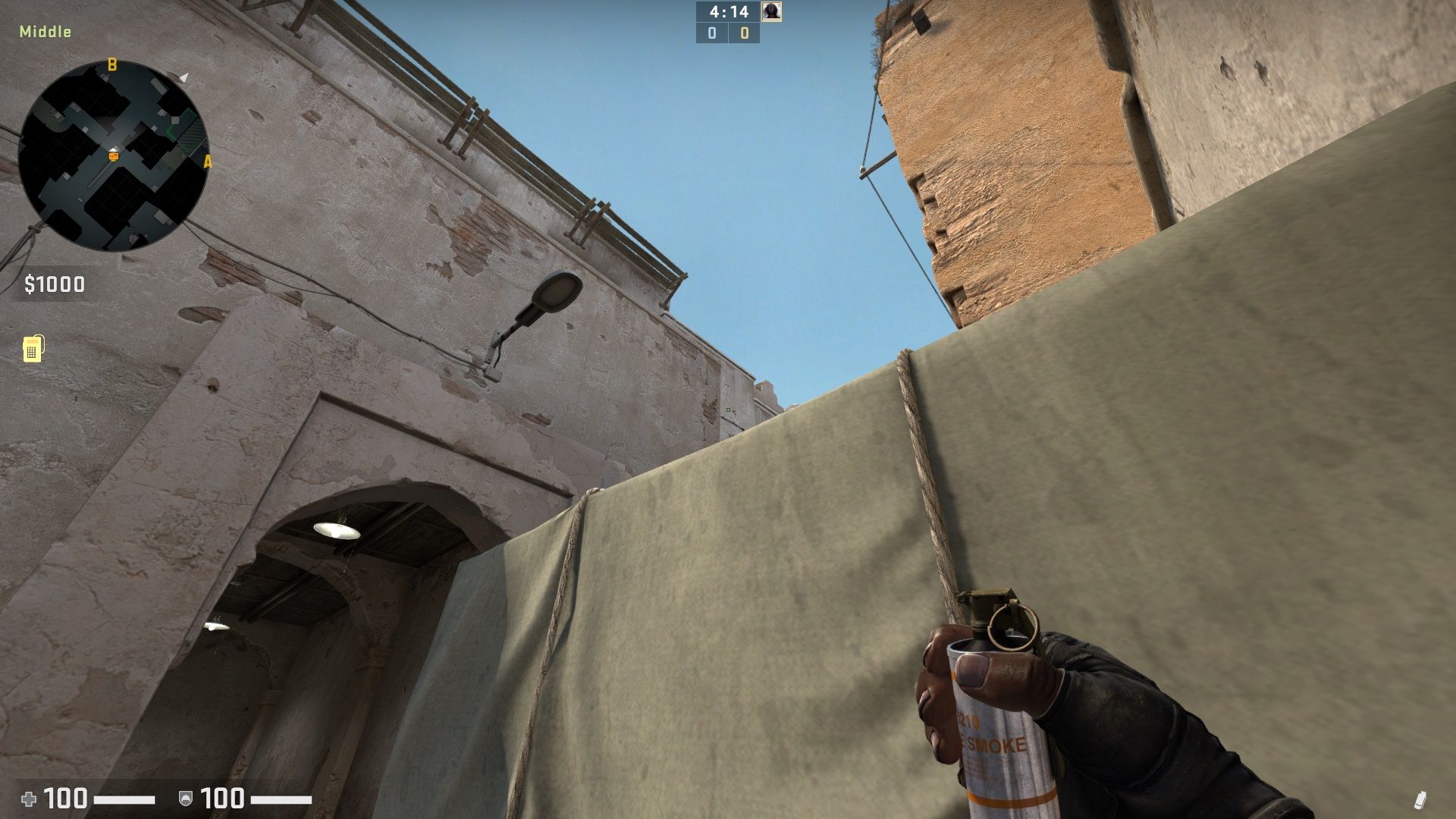 Go down to the bottom of Mid and stand in the corner against the box. Look up, and on the left, locate the light rectangle area on the wall of the building.

You will see a little dark spot above the black line (click on the screenshot to zoom in and see the crosshair placement). Aim just a little left to the dark spot. 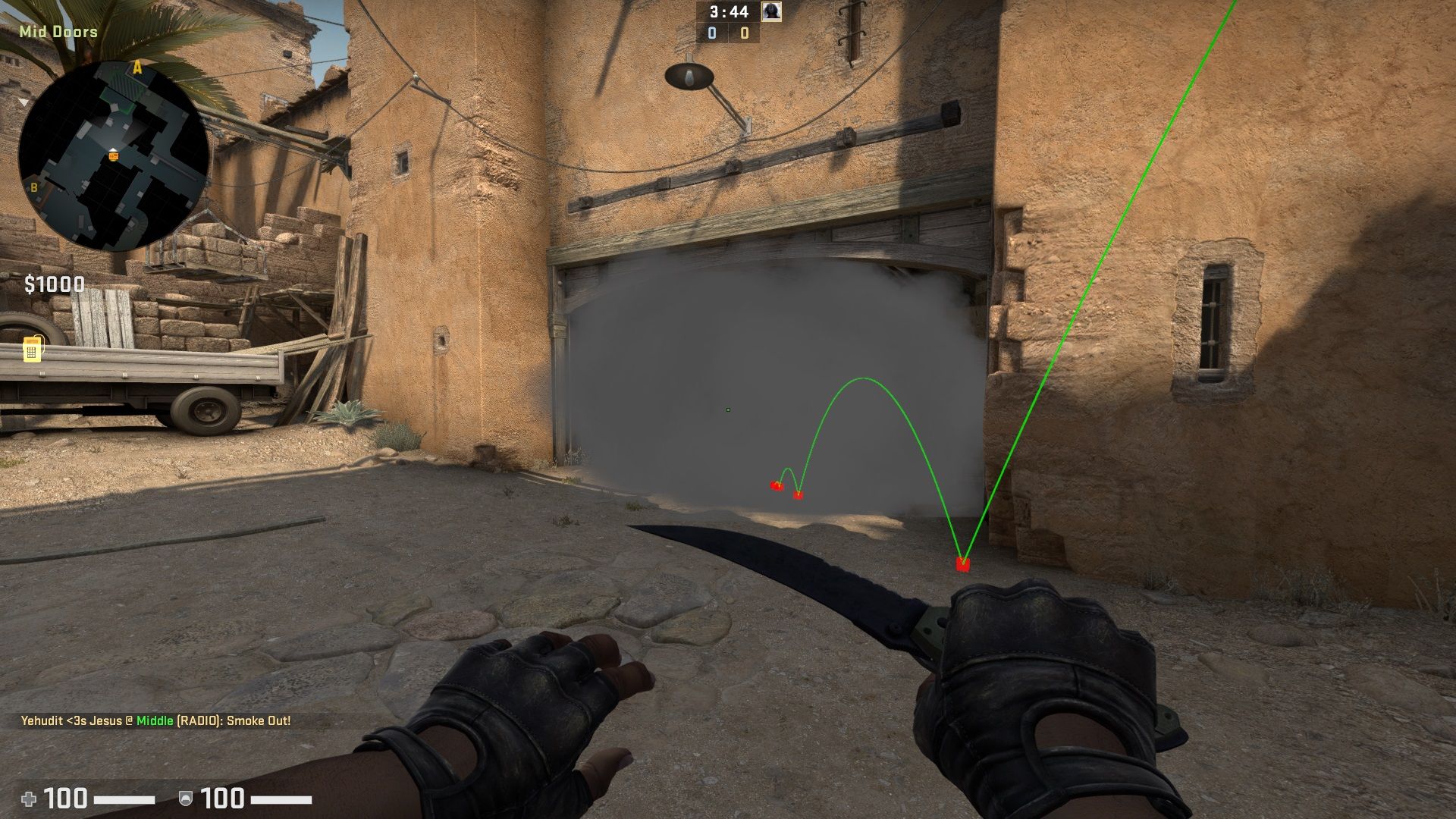 This Smoke will allow for a Mid to B push. It is advised that you push Window rather than B Doors, as enemies will be able to see you enter through B Doors.

Smoke For Mid To A 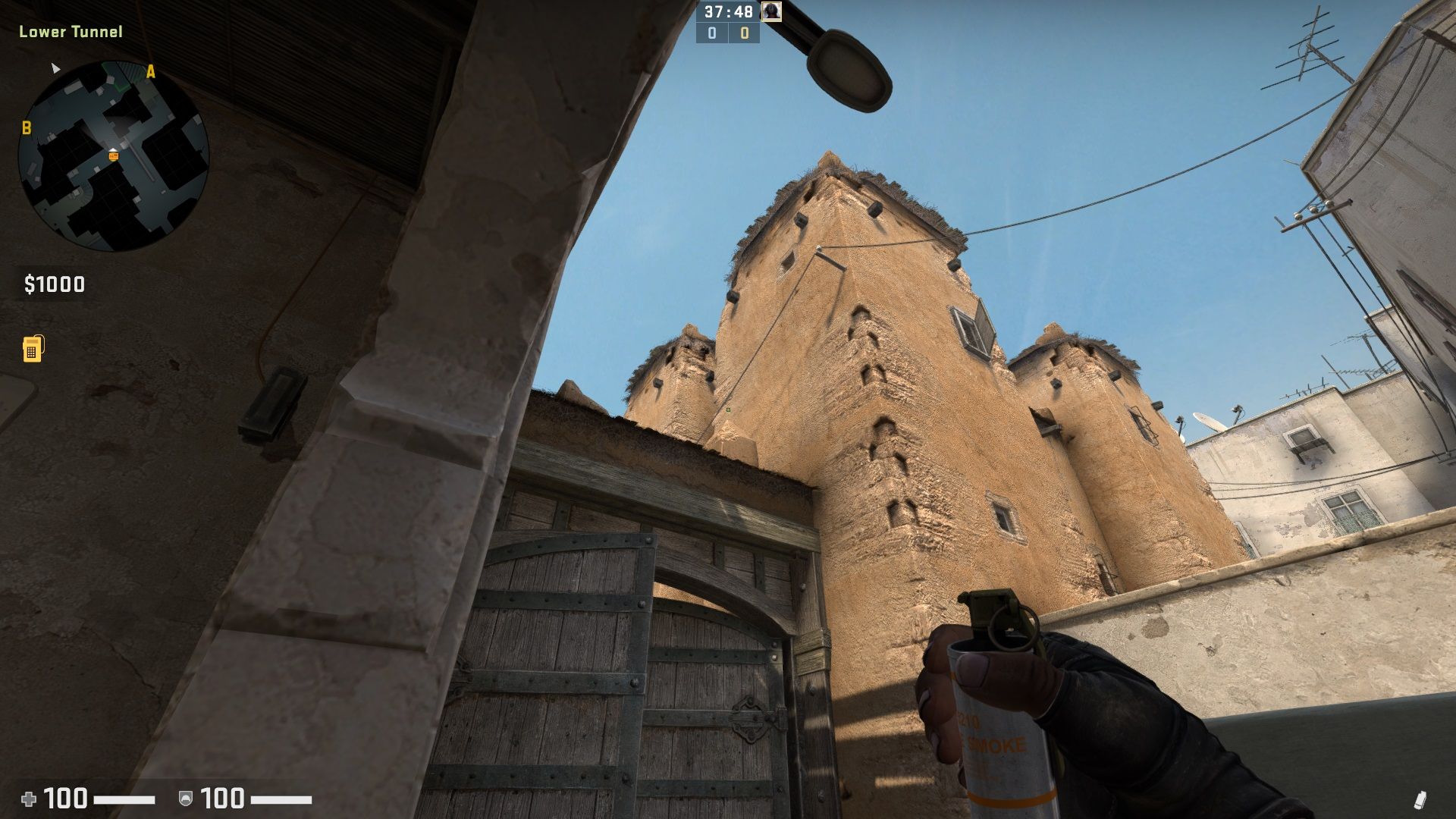 In mid, by Lower Tunnels, stand against the arch. Then look up above Mid Doors, aim your crosshair just slightly above the pointy pillar, and throw. 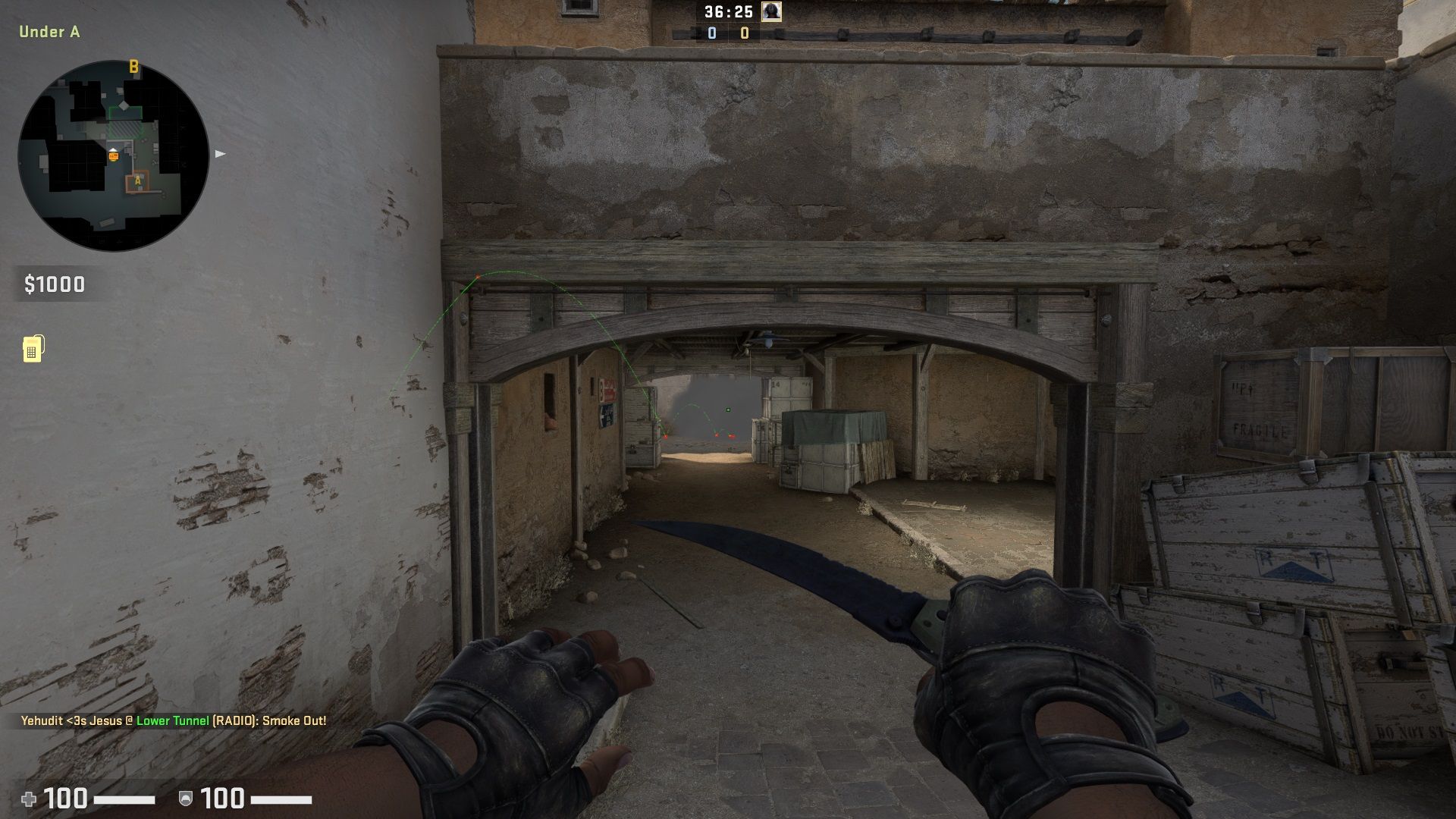 Using this Smoke, you will block off a large portion of A from opponents peaking from B, which can allow you to push A from Mid. This can be combined with a push from A Long or A Short.

Grenades For A Attack And Retake

Smoke CT From A Short 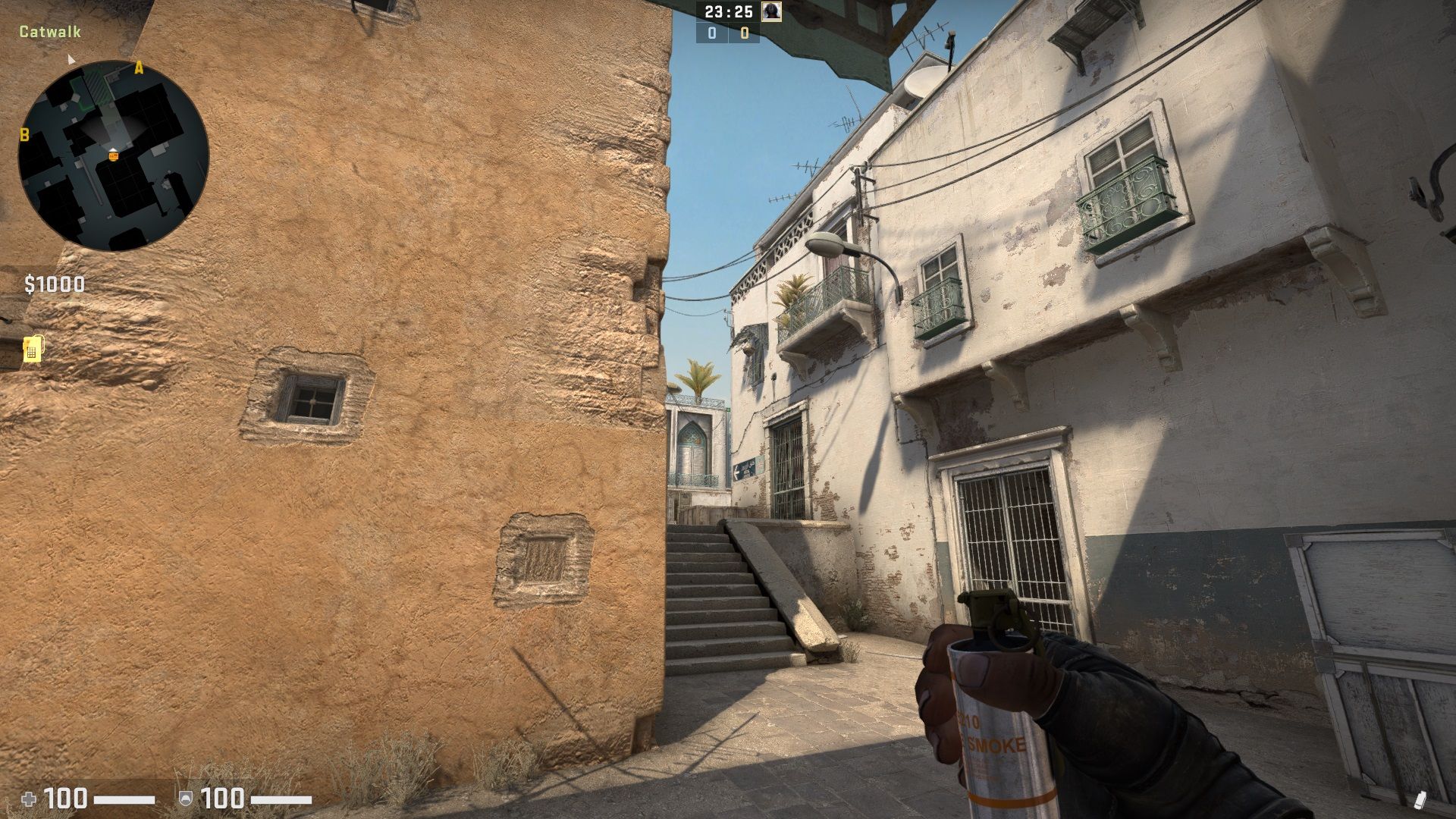 On A Short, you will notice a scrooge door on the right side. You want to stand in its left corner (left when you face it, right when it's behind you). Look at A Site, aim at top of the blue line, and throw. 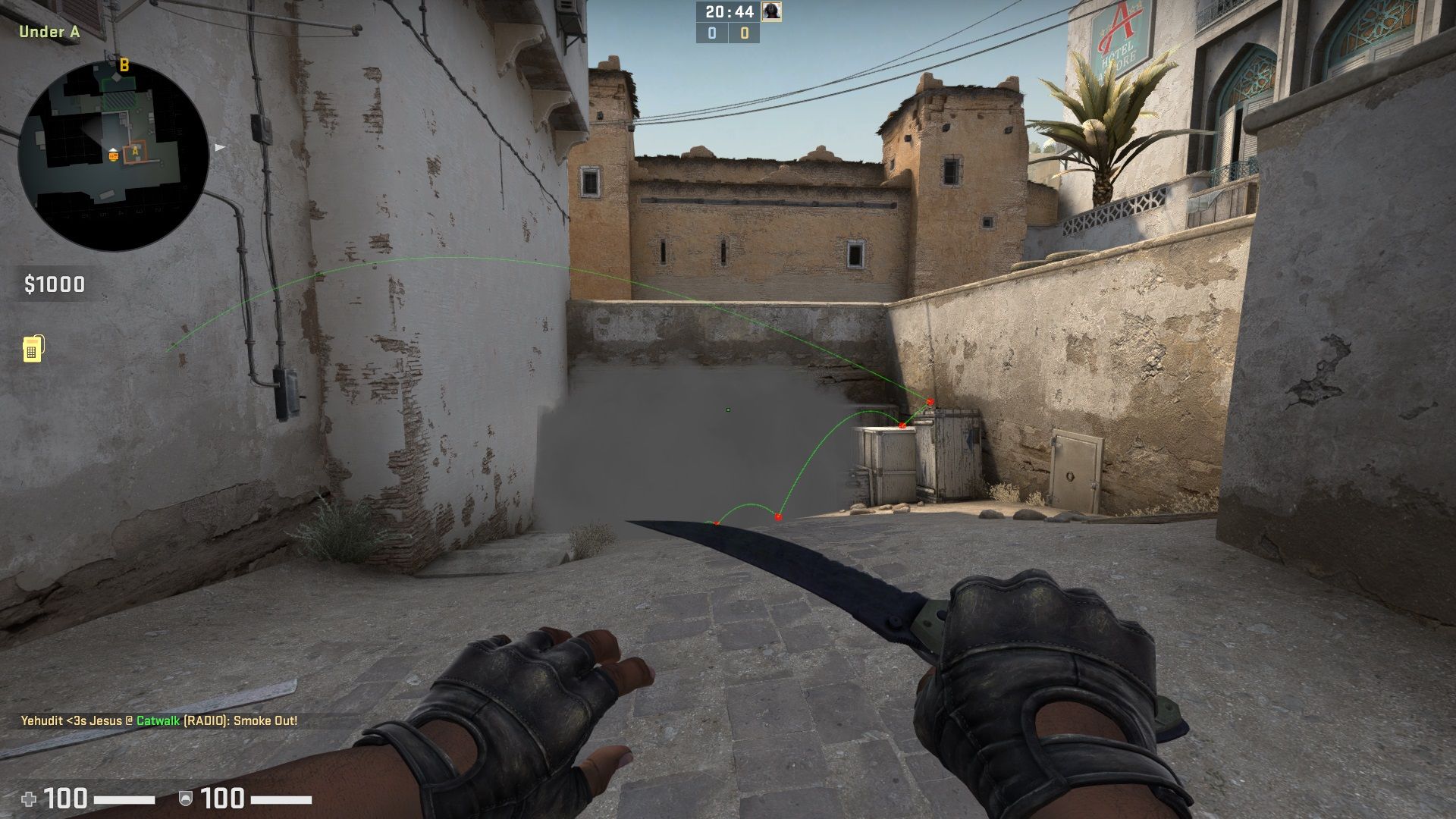 When pushing A from both Short and A Long, this Smoke is a great way to block off CT.

Smoke Further Up A Short 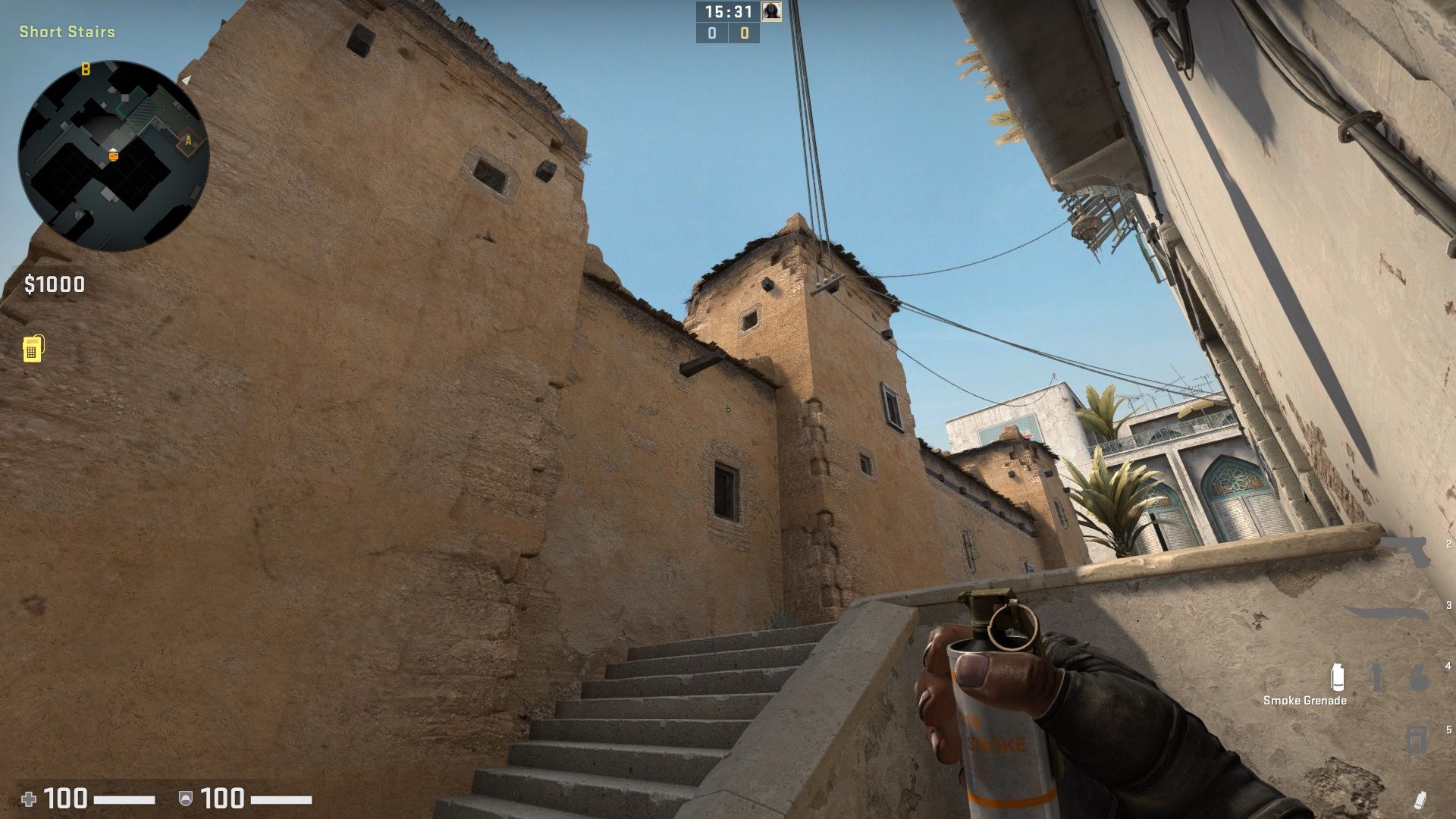 Stand against the middle of the double door with bars on A Short. Then, look for a grey spot above the small window, aim at it, and throw. 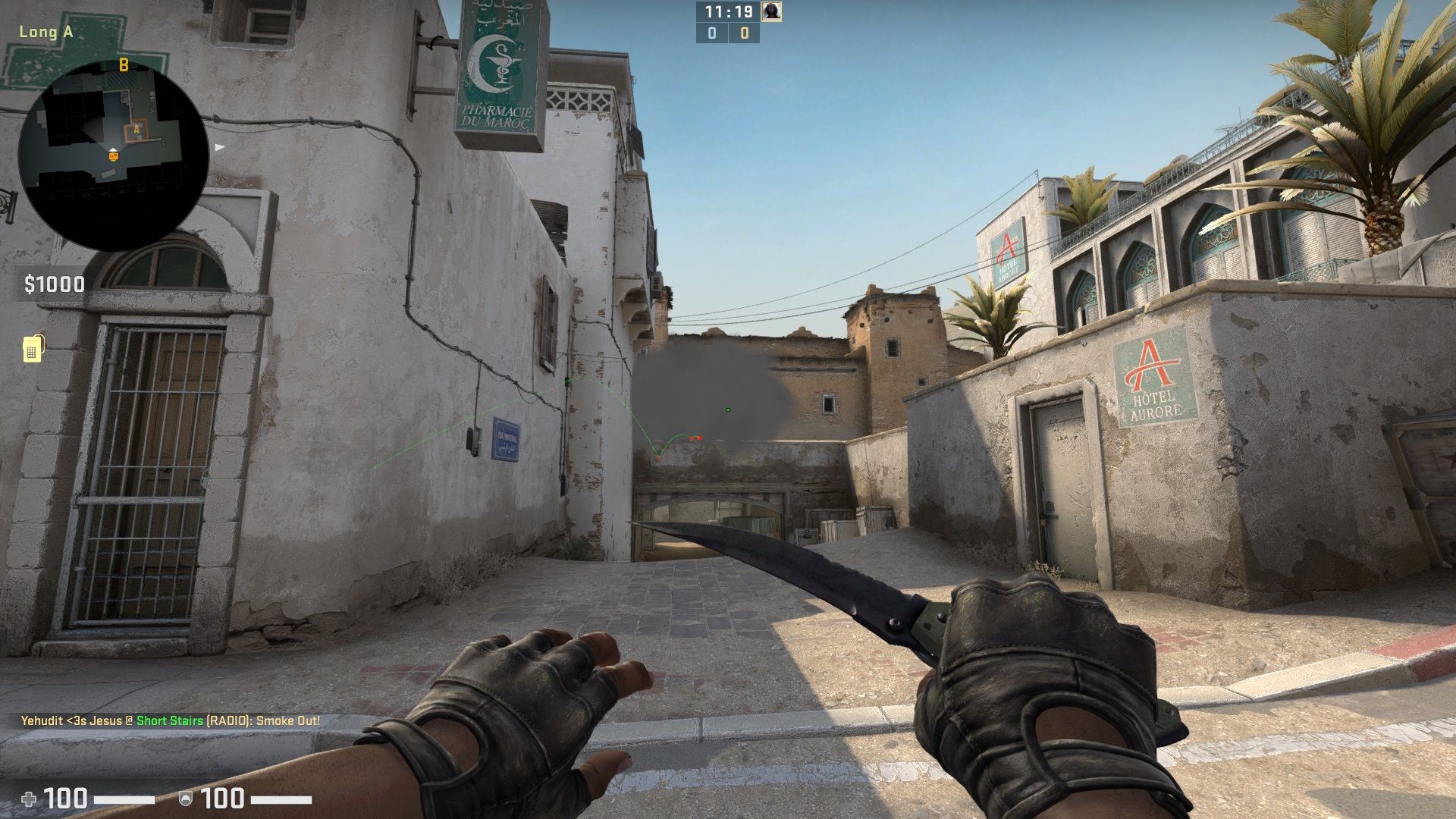 A Smoke A Short is perfect for when your teammates are pushing from A Long. Without your teammates pushing A Long, this smoke is not as viable, as it doesn't cover Ramp or Car.

Grenades For A Defense

HE Grenade A Short From Under A 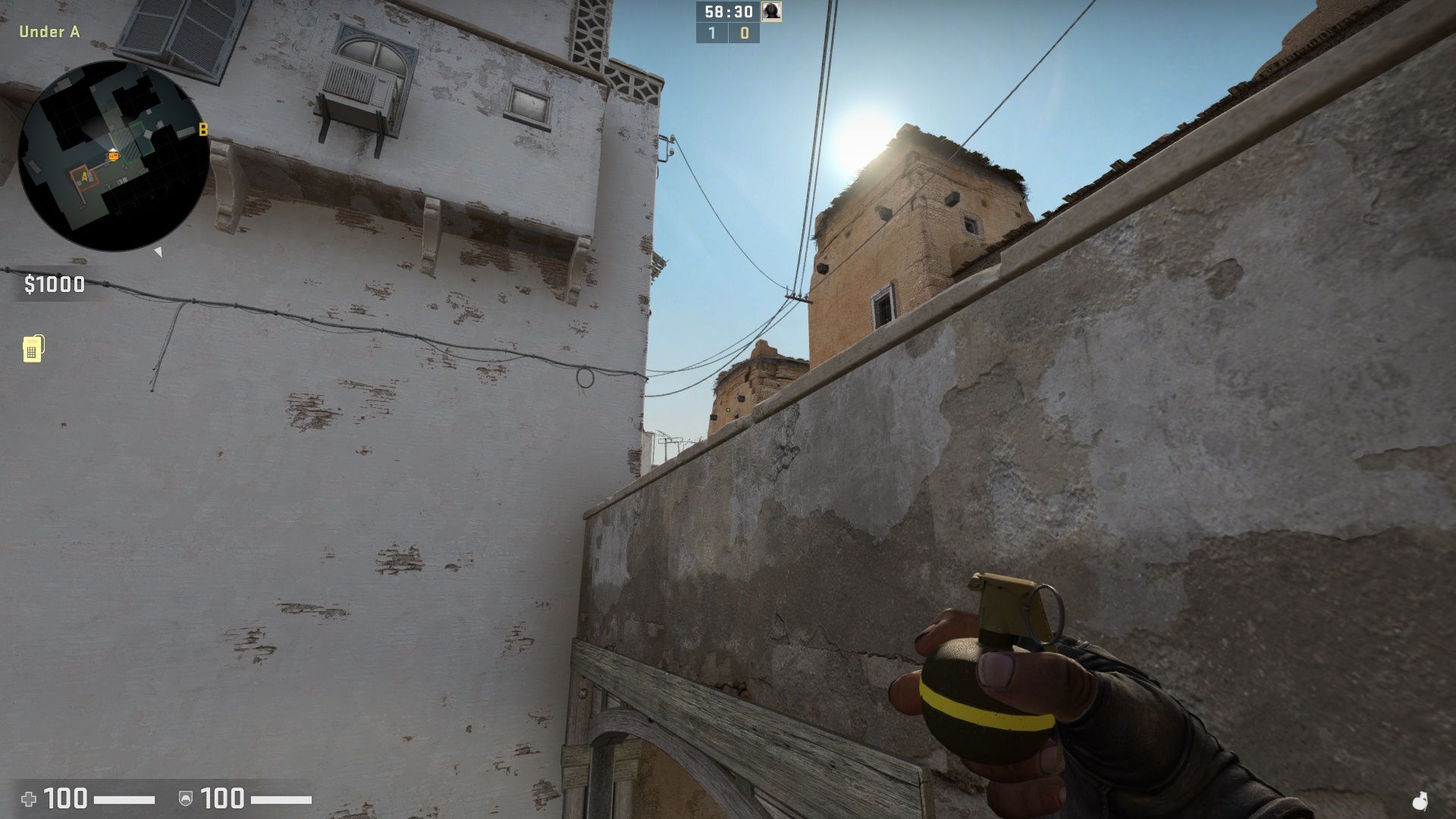 Go to Under A and on top of the boxes in the corner. Aim just about anywhere at the building on the left, and throw your grenade. 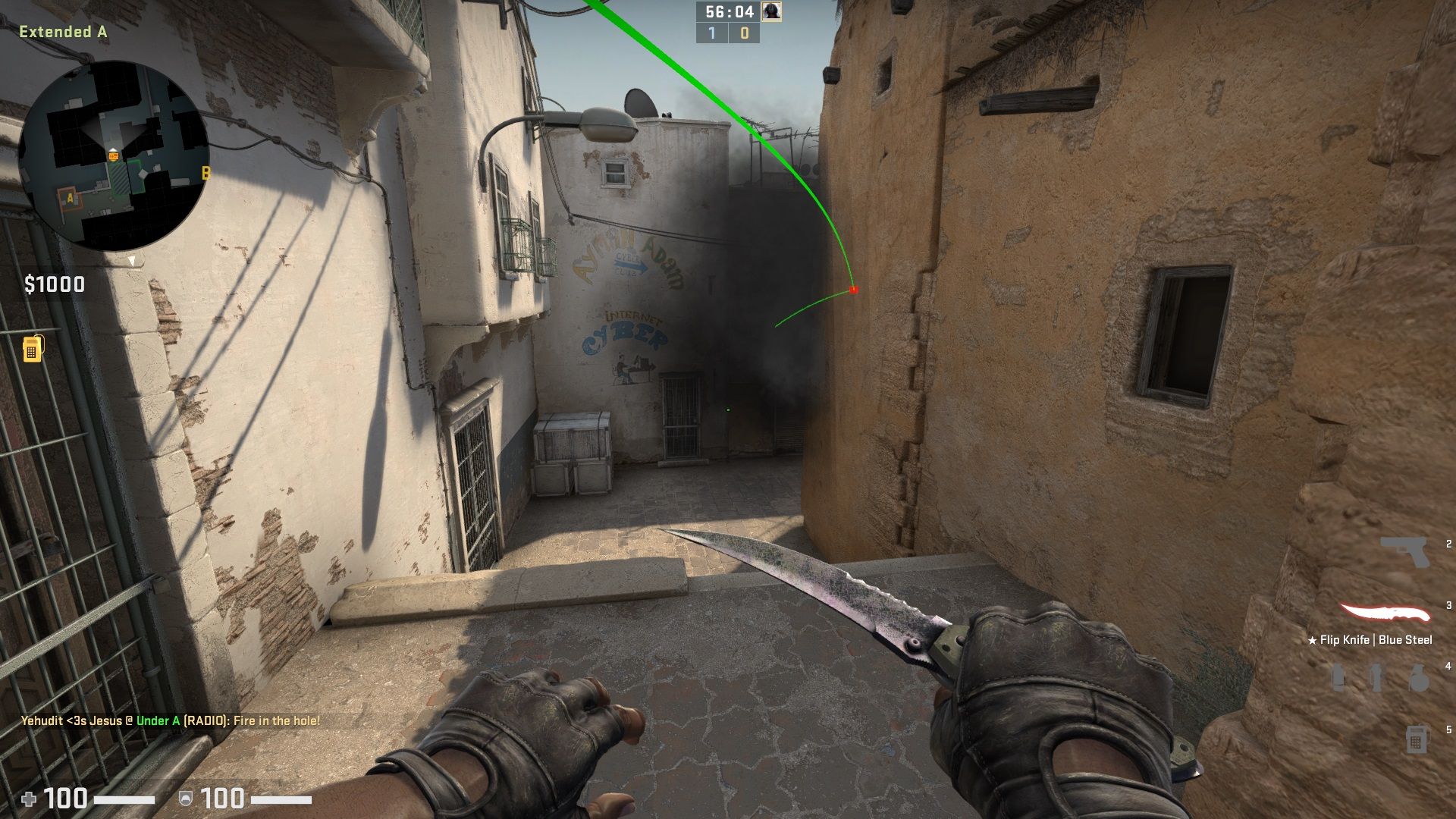 Your HE Grenade will hit anyone approaching while you're still in safety.

Flashbang For A Long Doors 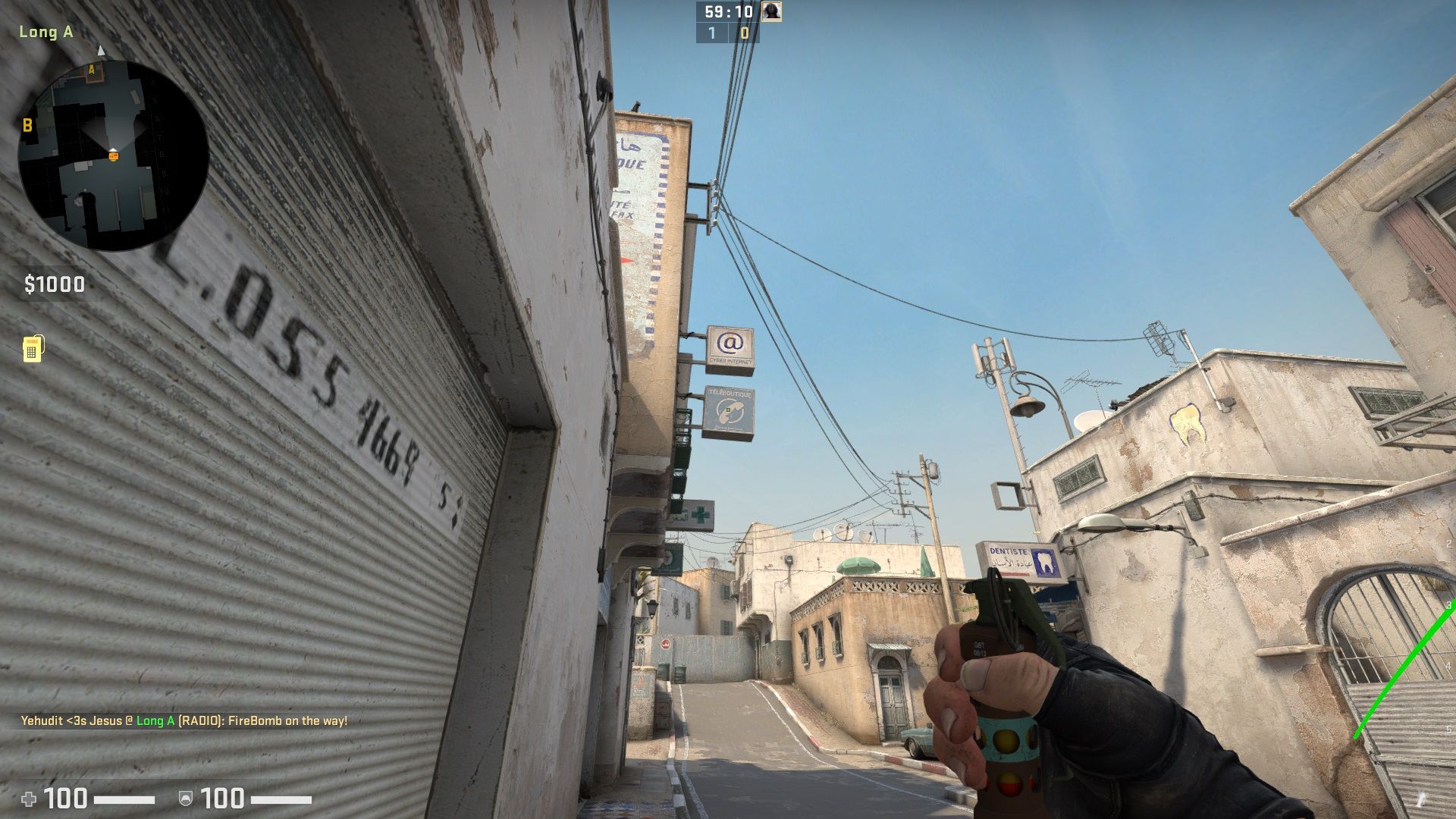 To flash A Long Doors without having to peak, go to the end of the wall and turn around. Aim your crosshair in the middle of the telephone sign and throw. Peak as soon as the Flashbang detonates to catch your enemies off-guard. 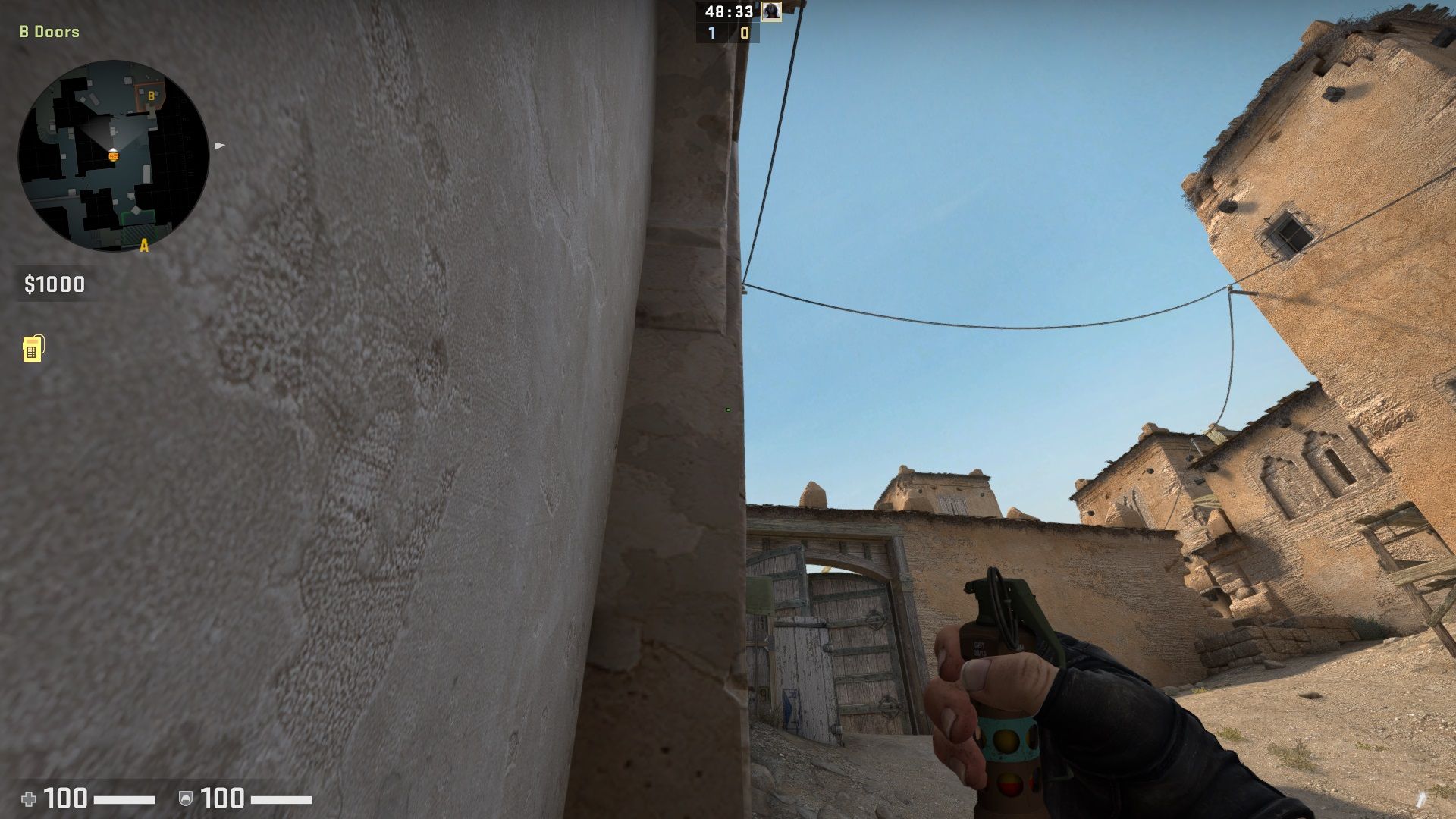 To aggressively peak Mid, stand on the right side of Mid (as if you were going to B Site) and align yourself against the arch next to the red arrow. Aim at the arch opposite you. Use the dark spot for reference.

Aim as shown above (click on the screenshot to better see the crosshair placement) and peak as soon as you pop the Flashbang.

A Long Popflash From CT Spawn 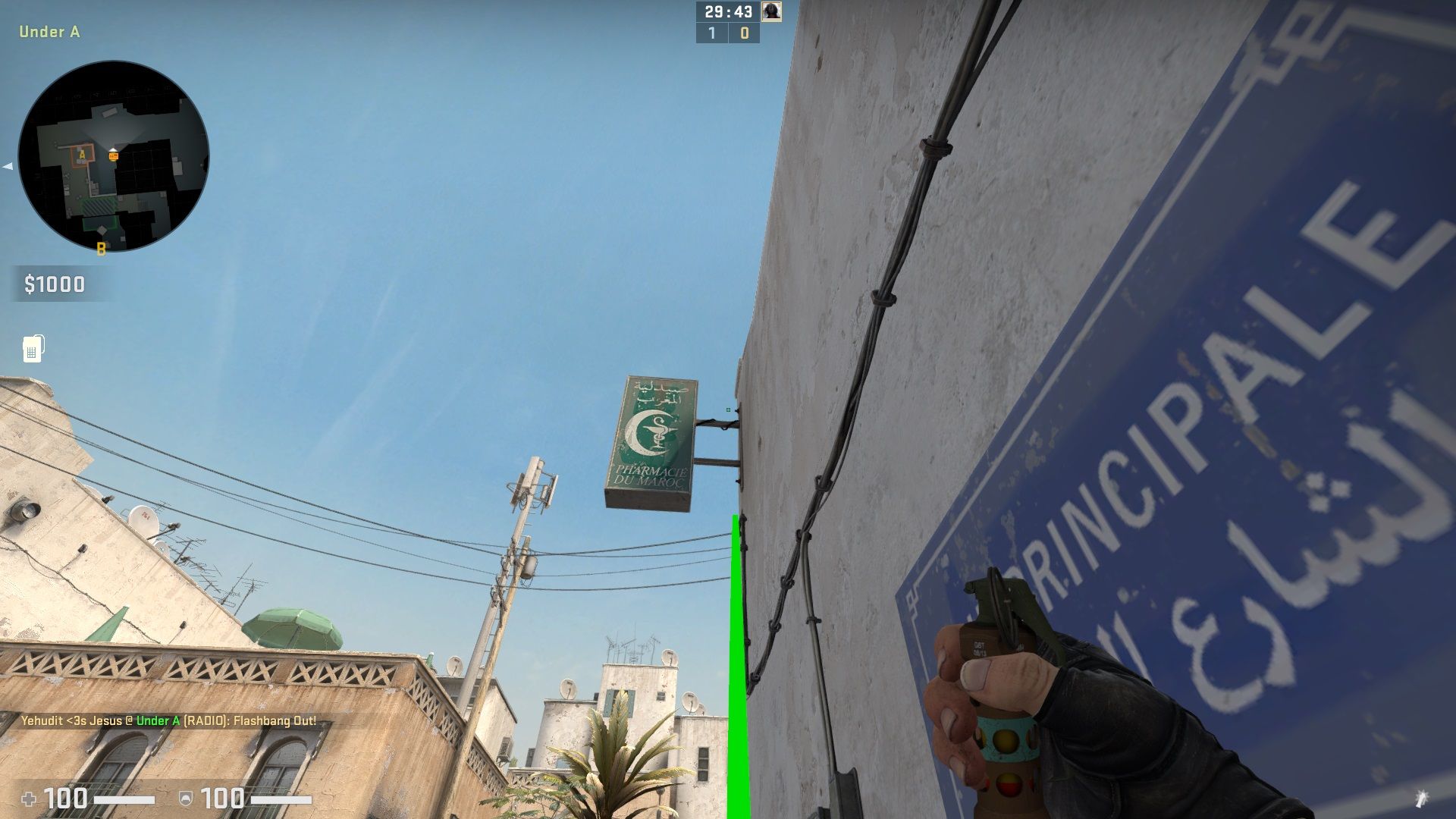 To pop-flash long while you're positioned in CT, stand against the right edge of the blue sign. Look left and up at the green sign and aim as shown above. Right-click, turn around to avoid getting flashed, and, once again, turn back around and peak straight away after your Flashbang pops. 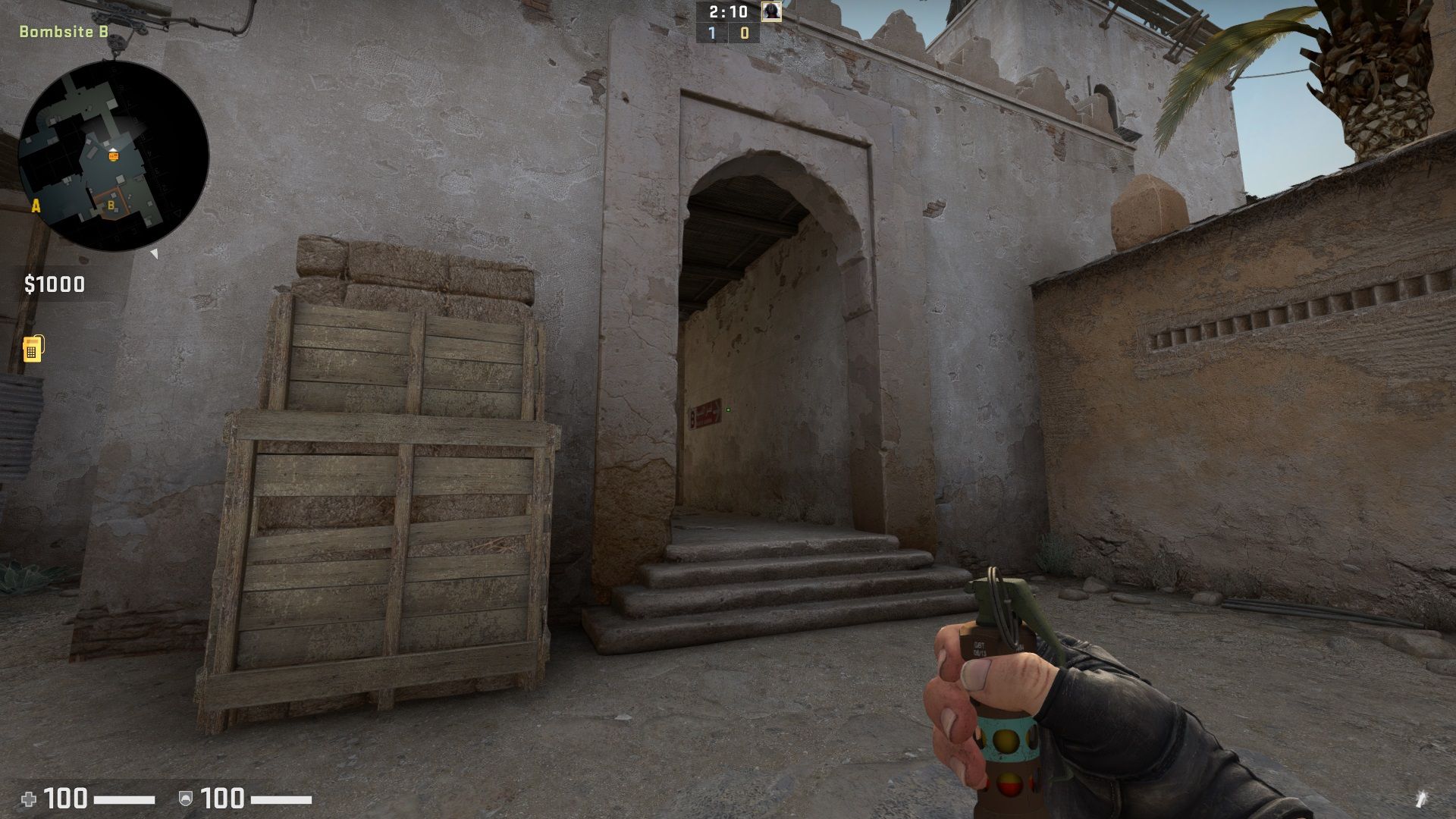 Remember the B pop-flash for attacking side? The same pop-flash can essentially be used in reverse. To activate this pop-flash, aim at the right of the red sign, run, and throw.

Ready To Use Your HE Grenades, Flashbangs, Smoke Grenades, And Molotovs? 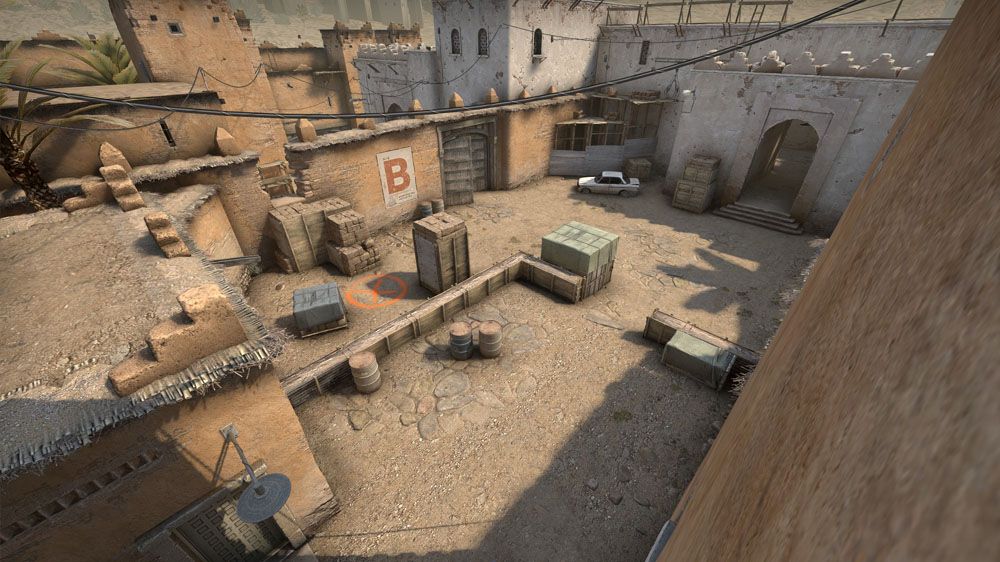 As another resource, you can download grenade practice maps in Steam Workshop.

Of course, there are endless opportunities with CS:GO grenades – some more difficult, and some easier. This article shows some options, which are easy to learn, remember, and utilise. Don't forget that it's fine to use grenades without using lineups as well. Ultimately, the purpose of lineups is to make your gameplay easier and assist you in avoiding peaking in dangerous situations.

Horizon Zero Dawn: Where To Find All Ancient Vessels