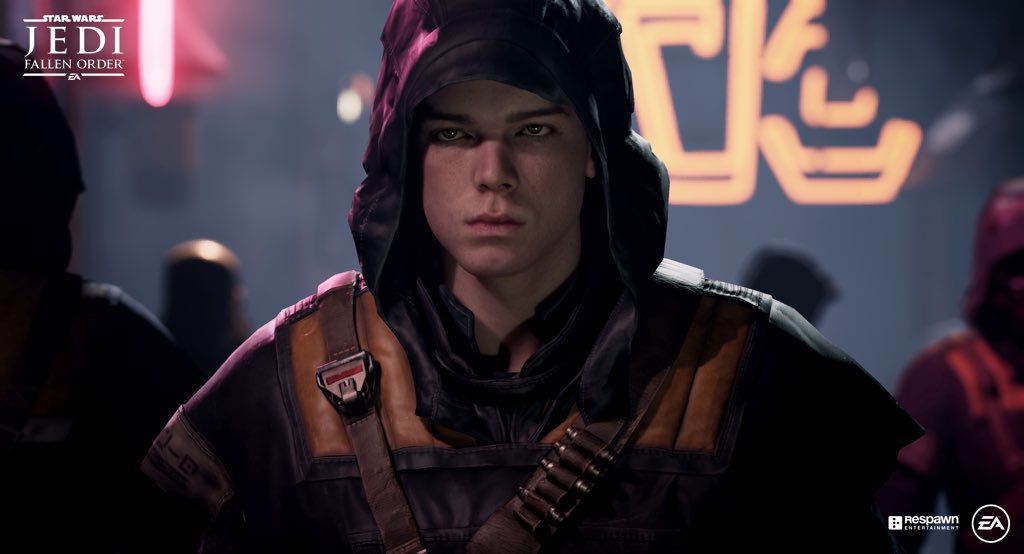 The Thursday letters page thinks not every mistake a publisher makes should be treated equally, as one reader recommends indie game Carto.

Forced out
I just watched the third episode of Obi-Wan Kenobi on Disney+ and, eff… it was so unexciting, so unimaginative, and so… cheap looking? That last seems an odd description given I know for a fact it cost a fortune to make but I can only imagine that all the money went on getting Ewan McGregor and paying for some very expensive catering, because the sets look barely above Doctor Who level at times. I mean, this last episode’s big action scene is literally in some sort of sandpit/mining area.

Then it got me thinking, Star Wars Jedi: Fallen Order looked better than this. It had better effects, better action sequences, and in many cases better acting. Some of the action scenes in Obi-Wan, and Boba Fett, have been straight up embarrassing. In some cases, I think it’s because the actors are getting old but that forest chase with you-know-who in Obi-Wan was almost unbelievable. That was below Doctor Who level and more like some sort of Chuckle Brothers skit. Oh no, a small branch! I’ll never catch her now!

It’s a disappointment but it’s made me realise that games can do everything these shows do and more. Even just that little tutorial-ish bit at the beginning of the Fallen Order, as you platform around the breakers yard, was more visually interesting than anything in a Disney+ show has done so far. Also, Squadrons has better space battles (there are hardly any in the shows) and Battlefront has better effects in general.

EA may be slow to pump out their Star Wars games but at least they’re worth waiting for when they come out. The Disney+ ones are being shoved out so quickly there’s just no thought or effort, or artistry, going into them. And yet still games are thought of as the lesser artform!
Gadfly

The Legend of Sonic
Can someone explain to me why anyone would want to make a new Sonic The Hedgehog game in the style of Zelda: Breath Of The Wild? Those two games have absolutely zero in common, so where on earth did that idea come from? I get that Breath Of The Wild was successful but so are a lot of games, so why pick on that one? Is it just because it helped reboot a famous franchise? Maybe, but Zelda wasn’t exactly coming off 20 years of trash when Breath Of The Wild came out, so that’s not a match either.

Maybe Sonic Frontiers will be good but no-one likes a copycat and it seems really weird that Sonic’s big comeback is a reskin of a completely unrelated game. I’m also worried about the atmosphere which, while not grimdark exactly seems to be far too serious for what is a game, lest we forget, about a talking blue hedgehog who can run really fast.

Would it also hurt for someone ato Sonic Team to actually explain what’s going on in these videos? I’m not a big fan of them just dumping them out with no explanation like this.
Heliard

Nothing to see here
The early footage of Sonic Frontiers leaves me with mixed feelings. On a technical level, putting Sonic in an open world environment makes perfect sense, and it seems to play functionally well. But what we’ve seen so far – which isn’t much, admittedly – looks rather… dull?

Hopefully some more interesting environments will be revealed because at the moment, it gives the impression that rather than fix the usual gameplay problems, Sonic Team has gotten around the challenge by simply swapping them for a mostly barren landscape.
Needlemouse91

Charming suggestion
That’s me just got to the end of a delightful game on Switch called Carto.

What a twee, feel good, and charming game it was. For those who are fed up of being drip fed solutions to puzzles it is also quite demanding at times, with the player tasked with noticing small visual or audible cues to find a solution or use their understanding of the mechanics to figure out how to proceed. I never cracked though and managed to figure out all of the challenges myself, without gravitating to an online guide like so many games push you towards these days. Heck, some games you’d say almost rely on it!

It has made me wonder about how useful websites like HowLongToBeat.com are, as it states the main story takes five and a half hours, but it took me about 10! That’s almost double. I don’t think I dawdled too much but maybe I just pondered over the puzzles longer and worked towards the secret puzzle pieces when I thought I was working towards the story?

Either way, I’d recommend Carto for anyone looking for something a little different to shooting or fighting things and who wants to use their noggin’ to overcome some nice puzzles, all whilst absorbing the lovely look and theme of the game.
Paul Conry

That’s bait
Like the letter from the other reader, I too find the Sniper Elite games quite relaxing. They are almost a puzzle game, closer to the old Commandos games than Call Of Duty.

But what I’d like to see is a darker side to the game. Saving Private Ryan portrayed German snipers as being terrible, wounding one soldier, and using them as bait to get others. I have no idea, but wouldn’t be surprised if this was a thing that happened on both sides. This would make an absolutely fantastic game mechanic in my opinion.

I can see why they might be reluctant to implement such a thing, but is it really any worse than a slow motion x-ray view of a soldier dying because his testicle has been shot off?
Evilmoomin

Worse than Nintendo
That Fable director can say what they want but there’s no way a game is in development for this long, without showing a single second of gameplay, without something being up. The first rumours were in 2018 so it was probably in development even before that. But even taking a minimum of four years, you’re telling me there’s been nothing to show in all that time? Not even Nintendo are that secretive!

The thing is Microsoft isn’t usually secretive at all. They showed that terrible Halo Infinite footage when anyone sensible wouldn’t so whatever state Fable is in must be even worse. Maybe if they had a bunch of other things to show off they might decided to keep it under wraps, for whatever reason, but they don’t – they needed this and yet apparently it wasn’t in a fit state to show.

Now, presumably it will finally be at their not-E3 show but I’m going to need a lot of convincing at this point and ideally some explanation of why they haven’t shown so much as a screenshot in all this time. And we don’t even know when it’s out yet!
Ollie

No connection
Elden Ring couldn’t be further from Call Of Duty; ridiculous letter that shows a lot of ignorance, especially if you’re going to mention Cyberpunk 2077 (a first person shooter like Call Of Duty) which was a total fail at launch.

If it’s boring it’s because you are bad at it, plain and simple that’s it.
Anon

Important complaints
I don’t think there’s widespread bias against PlayStation, for the most part. I think the media and the public have valid roles in holding any business to account for stupid mistakes and greedy decisions.

The issue for me is when equal weight seems to be placed upon every element of the business, as though retro emulation teething problems or the decision to release some high profile games across generations, are as impactful and important as, say, releasing an excellent new first party game.

I’ve seen frequent complaints from people who want to be advertised to more, or who want a specific exec to be more communicative, but to me these are trivial things when held up against good games. While I don’t think all issues can be dismissed by just saying ‘Yeah, but good games, tho’’, we’re talking about people insisting they’ll be abandoning the platform completely, which just comes across as melodramatic at best and insincere at worst, like they’re secretly revelling in the negative coverage.

In comparison, Xbox can be some sort of white knight for consumers and retro gamers, but it has a problem getting big worthwhile games out the gate. While that’s the case, the appeal of Game Pass is limited for those of us who already have too little time to play all the games they’ve handpicked, that aren’t on the service.

I also think Nintendo has a bit of an effort problem (pandemic notwithstanding), with too few genuinely high effort releases and so much else feeling like a schedule filler or a poor value proposition. I’ve given them the benefit of the doubt because of the quality of their most ambitious games and the impact of Covid but we’re now over five years into the first gen since the 80s where they’ve only had to meaningfully support one platform and their rate of new first party output that isn’t remasters or mini-game compilations doesn’t seem to have improved.

Those are fairly serious issues and they’ve plagued these businesses for years. Sony could be in the news for a hundred more of the sort of mistakes they’ve made since 2020 and it wouldn’t matter that much to me if they keep doing the stuff I think matters most.
Panda

GC: We think you’re underplaying the effects of the pandemic a bit there. Because of it, the release schedules aren’t going to be anywhere near normal for at least another two years.

Inbox also-rans
Tell Me Why is free to download on Xbox and PC (including Steam) for Pride Month. Also, from 4pm on Thursday on Epic Games Store there is a mystery game available for free. Hope everyone has a good long weekend.
Andrew J.
Currently playing: Super Mario Run (Android)

I really wish Yu Suzuki had stuck to making arcade games instead of wasting the second half of his career on the boring Shenmue. A Space Harrier spiritual sequel with giant swans sounds great!
Cashe

This week’s Hot Topic
The subject for this weekend’s Inbox was suggested by reader Carter, who asks what is your favourite sci-fi game?

The genre of the video game doesn’t matter as long as it can be described as science fiction in some way, but which is your favourite and why? How much do you enjoy sci-fi as a setting, and do you prefer it to be more serious or more fantasy led?

Are there any concepts or licences you feel haven’t been done well before and how would you handle them? Which games do things like spaceship combat and futuristic weapons best and what concepts, like zero gravity and alien planets, do you feel remain underexploited?

XR Swim is a Much Needed Centralized Portal for WebXR Experiences