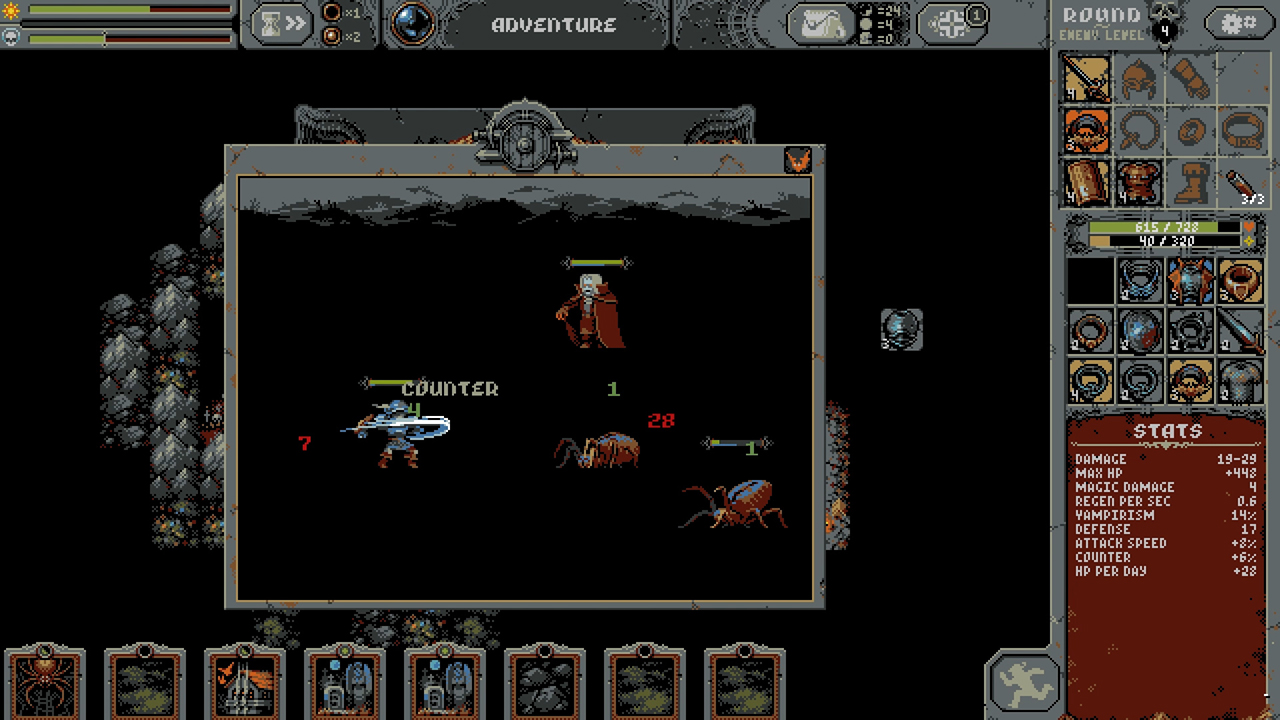 One of 2021’s breakout indie hits makes its way onto console, but does Loop Hero find a natural home on the Nintendo Switch?

If you’ve been paying attention to The Game Awards or glanced at the Steam top sellers list back in March, you might have heard of Loop Hero. Developed by Russian studio Four Quarters, and hailing from publisher Devolver Digital, it’s become one of this year’s breakout indie success stories – selling over 500,000 copies within its first week of release on PC.

That’s surprising, because Loop Hero is a difficult game to explain – even more so to market via screenshots or trailers. At its core, Loop Hero is an endless role-playing adventure, where a character you passively control walks around a loop and battles monsters to secure resources, which you use to upgrade your camp to add extra tools for subsequent runs.

The magic of Loop Hero is its balance between layered, mechanical complexity and oddly relaxing strategy. You can only stop and start your character around the loop, with all battles against blobs, spiders, gargoyles, vampires and other monsters playing automatically without your direct involvement. Instead, you’re playing the role of protector and dungeon master, laying down obstacles which spawn enemies around the loop so your hero can kill them; This then earns them rewards and better gear to take on tougher enemies for better loot, and so the loop goes on.

Following so far? There’s also a deck-building aspect. What enemies and structures you can deploy for your hero are dictated by the 13 cards you have in your deck – which you can change before the start of each expedition loop. You unlock new cards as you progress, which are placed outside the loop to farm materials and range from cemeteries which spawn skeletons to resource-gathering tiles like meadows and mountains.

As you cycle around these loops, enemies become tougher and the stakes higher. If you retreat on the starting tile (aka your camp), you’ll return with all the resources you’ve collected. If you die mid-loop you return with only 30%, while a retreat mid-loop will net you 60%. The main crux of Loop Hero is balancing this risk and reward, weighing up whether you can survive another lap for a bigger haul (or run for the boss), or hedge your bets and upgrade your camp at a slower pace.

Similar to roguelites like Hades, it always feels like you’re progressing in Loop Hero no matter whether you win or lose, which makes the experience consistently rewarding and addictive.

This addictive quality builds as you gain a better understanding of the mechanics. For example, placing certain tiles next to each other, like rocks against meadows, will grant additional resources. If you plant blood groves around a grove patch, and kill enemies within its vicinity, you’ll eventually spawn a more intimidating enemy that drops powerful gear.

There’s also another level of consideration when it comes to weapon and armour attributes, with bosses often requiring you to have a certain level of counter or evade – or even a unique attribute like vampirism – to survive.

A lot of these details you have to figure out yourself. Loop Hero isn’t keen on explaining many of its intricacies, which, depending on your tastes, will either frustrate or be a selling point. We fell somewhere in the middle, as while these strategies are satisfying to unfurl, the opening hours would have benefitted from better goal sign-posting.

There’s a steep grind to unfold all of Loop Hero’s mechanics, including traits and classes, and we imagine a lot of players might not persist to the point where it does all click.

One thing to also bear in mind is that Loop Hero is unashamedly a grind. One you’ll either rinse for hundreds of hours or drop off once the mechanics lose their novelty. The amount of camp upgrades do offer plenty of incentive for repeat runs, with new cards unlocked at a steady pace as you progress through the game’s four chapters.

There’s an intriguing story wrapped underneath too, that’s better than it needed to be, as you try to restore your hero’s memory and rebuild the world following an apocalyptic event.

It’s a testament to Loop Hero that any repetition from the grinding doesn’t settle in for a surprisingly long time, thanks to the engaging, layered systems and charming presentation. The steely pixelated visuals look simplistic but are full of personality, possessing a sombre quality which matches the story’s tone. The soundtrack might be one of the year’s best too: all moody, fizzing 8-bit synths which make each loop a pleasure to slink back into.

While the transition to Nintendo Switch is mostly smooth, the controls remind you that Loop Hero was originally designed for PC. You can use the touchscreen in handheld mode, but the button-mapping on the Joy-Cons and Pro Controller makes the experience fiddly to navigate.

To access certain sidebars, like your cards or gear loadout, you have to hold down triggers to snap back and forth. Some of the main menus, weirdly, don’t let you scroll through them using the analogue stick, forcing you to use the directional buttons which always feels jarring.

However, these small issues aren’t nearly enough to spoil the fun. Loop Hero’s gameplay rhythm feels perfectly matched to a portable console, allowing for quick dips in and out of runs, which in turn make the game’s repetitive spells less bothersome.

Loop Hero blends roguelike, deck-building, and auto-battler elements into one of the most compelling games of the year. The experience won’t appeal to everyone – and better direction in the opening hours might have helped fast-track the game’s best qualities – but if it clicks, this magnetic and therapeutic cycle is a grind like no other.

In Short: A genre hybrid that turns repetitive loop grinding into one of the most uniquely addictive gaming experiences of the year, with surprisingly few caveats.

Cons: The lack of hand-holding and its repetitive nature might put off some players, especially in the opening hours. Switch controls could’ve been better thought out.

Amazon Prime's Free Games For August Revealed: 19 Games Up For Grabs This Month

Interview: Valve On Why Half-Life Alyx Could Only Be Made In VR