It’s been a busy couple of months on the Pokémon auction scene, as not one but two individual card selling records have been beat! And let’s not forget about the rare collection of 1st Edition cards worth $45,000 in the UK. Well, buyers have gone and done it again with another astronomical price paid for a rare unopened box of Cards.

The Pokémon Trading Card Game is still going strong after its initial release almost nearly 24 years ago in Japan. Based upon Nintendo’s popular video game series of the same name, it was first published by Media Factory in Japan under the Pocket Monsters name. An English language release came two years later under the portmanteau that we know and love today. Originally published by Wizards of the Coast outside of Japan, the game has continued to grow and is in its eighth generation of cards. In total, 90 different sets of cards have been announced or released, with most available in a starter deck aimed at new players as well as individual booster packs featuring randomized cards with differing rarity.

Heritage Auctions handled the auction for the record-breaking sale of an unopened “1st Edition Limited Printing” booster box of the English language game. For a booster box to be factory sealed in such amazing condition after 22 years is extremely rare and goes some way to explaining the record-breaking $198,000 paid. However, the true value may lie locked, hidden away inside. All cards are expected to be in perfect condition and with a 1st Edition Charizard selling for $75,000 and several other reaching £20,000+, who knows what the total individual card value would be? 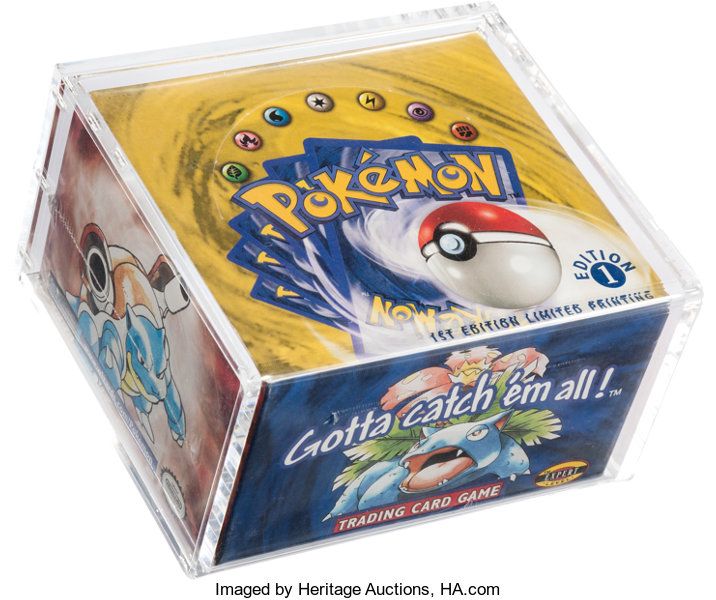 The “1st Edition Limited Printing” set contained 102 cards of rarity ranging from common to rare and it contained holo versions of some cards. To make matters more complicated, Wizards did some redesign work on the card mid-print run to improve readability and color saturation. This can be quickly identified just by looking at the cards as the first print run used a different font for HP, the colors were muted, and most telling – the frames on the card were missing the shadow. Despite the reduced aesthetic appeal, the shadowless cards are hotly sought by collectors.

Who knows what treasures are tucked away in parent’s attics the world over. Quick! Grab the flashlight and embark on a treasure hunt for riches unknown. You never know what you will find from your childhood past that might be worth a few bucks.