Outriders’ Asylum quest brings the story full circle by bringing your crew to where it all began. Trapped in the same forest that killed many Outriders when you arrived, you’ll need to scavenge for parts to repair your truck.

This quest is fairly quick and rather uneventful, but Asylum does set up quite a few plot points that are carried out throughout the second half of the game. It also contains one of the most frustrating minibosses in the form of the Blood Morpher. We’ll guide you through the forest, how to clear each arena, and how to kill this deadly miniboss.

Explore The Forest And Locate The Old Outriders’ Truck 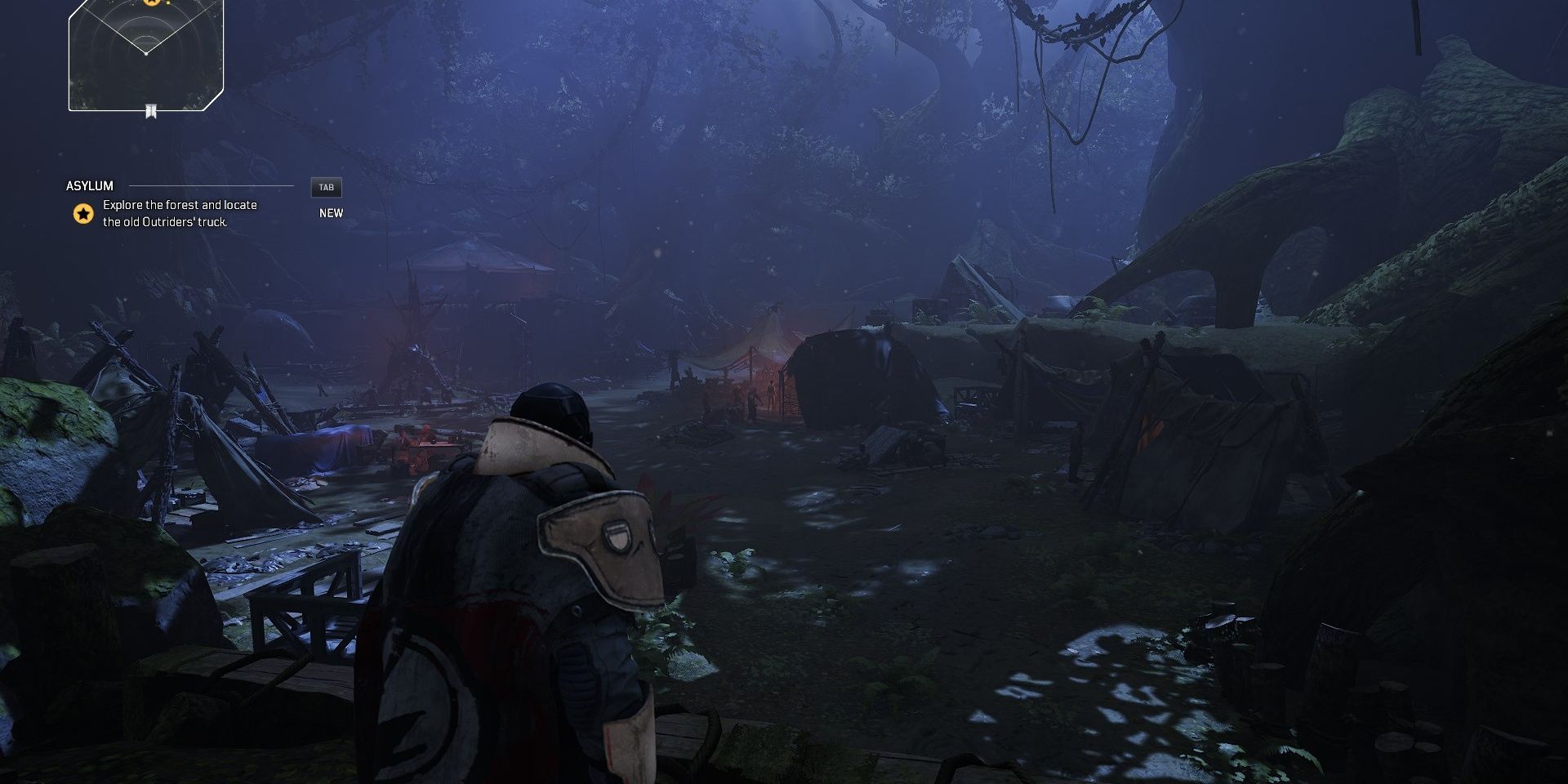 The Forest Enclave is one of the largest hub towns in Outriders. Fortunately, it’s fairly easy to navigate. Run straight ahead from spawn to reach the exit. Be sure to stock up on ammo and upgrade your gear before continuing.

Spoiler: Dr. Zahedi will be unavailable once this quest is complete. Swap out your mods and upgrade your items before continuing, as you won’t be able to craft your gear during the next quest. 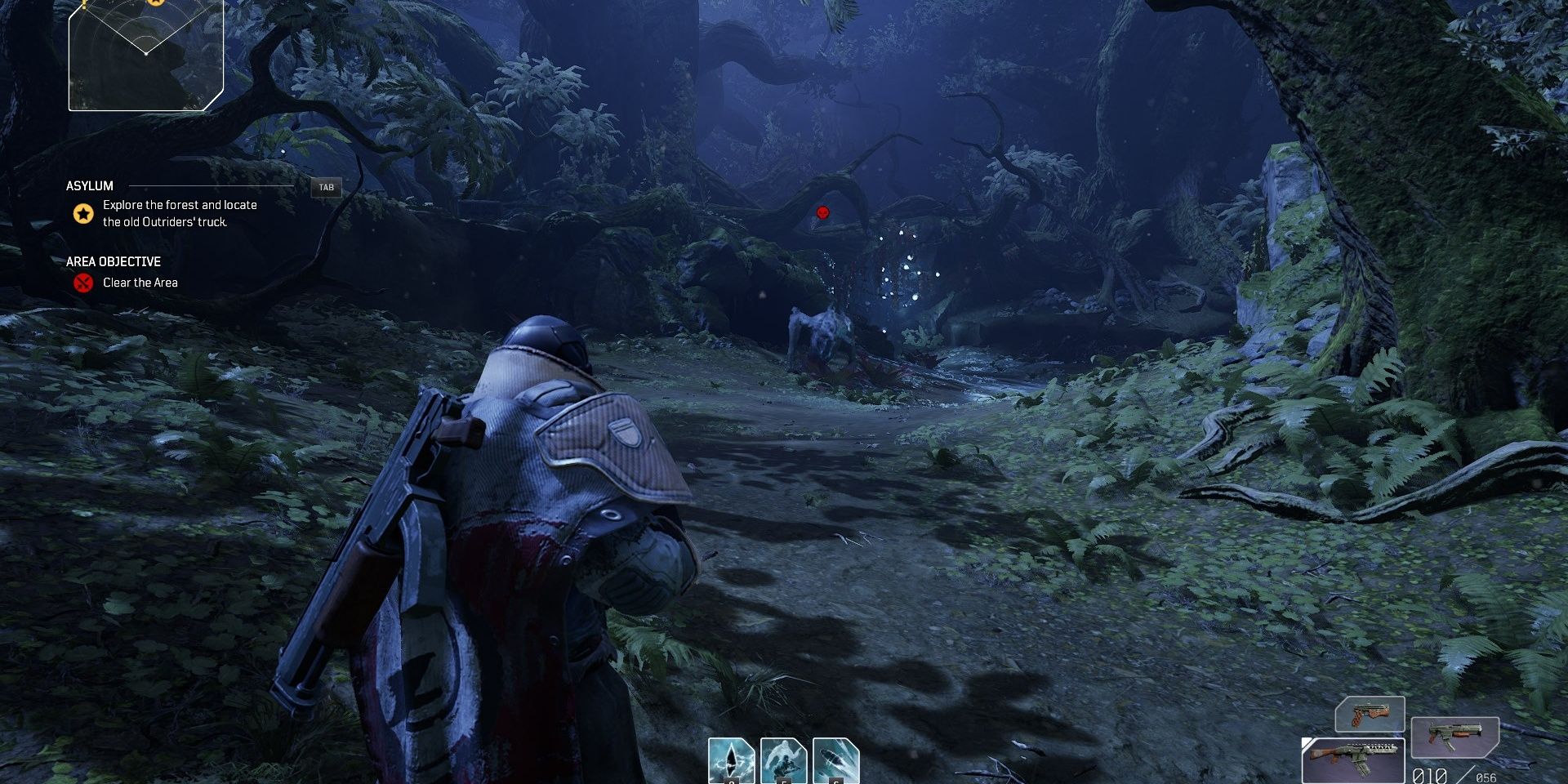 For a dense forest, this level is one of Outriders’ most linear. Push forward through the forest to find the first group of enemies

The Crawler is your biggest threat here, capable of freezing you from a distance. Focus on killing this enemy first. If you push slightly beyond that enemy, Perforos will spawn to rush you. If you use on-kill mods, consider killing these fodder enemies first before damaging the Crawler. 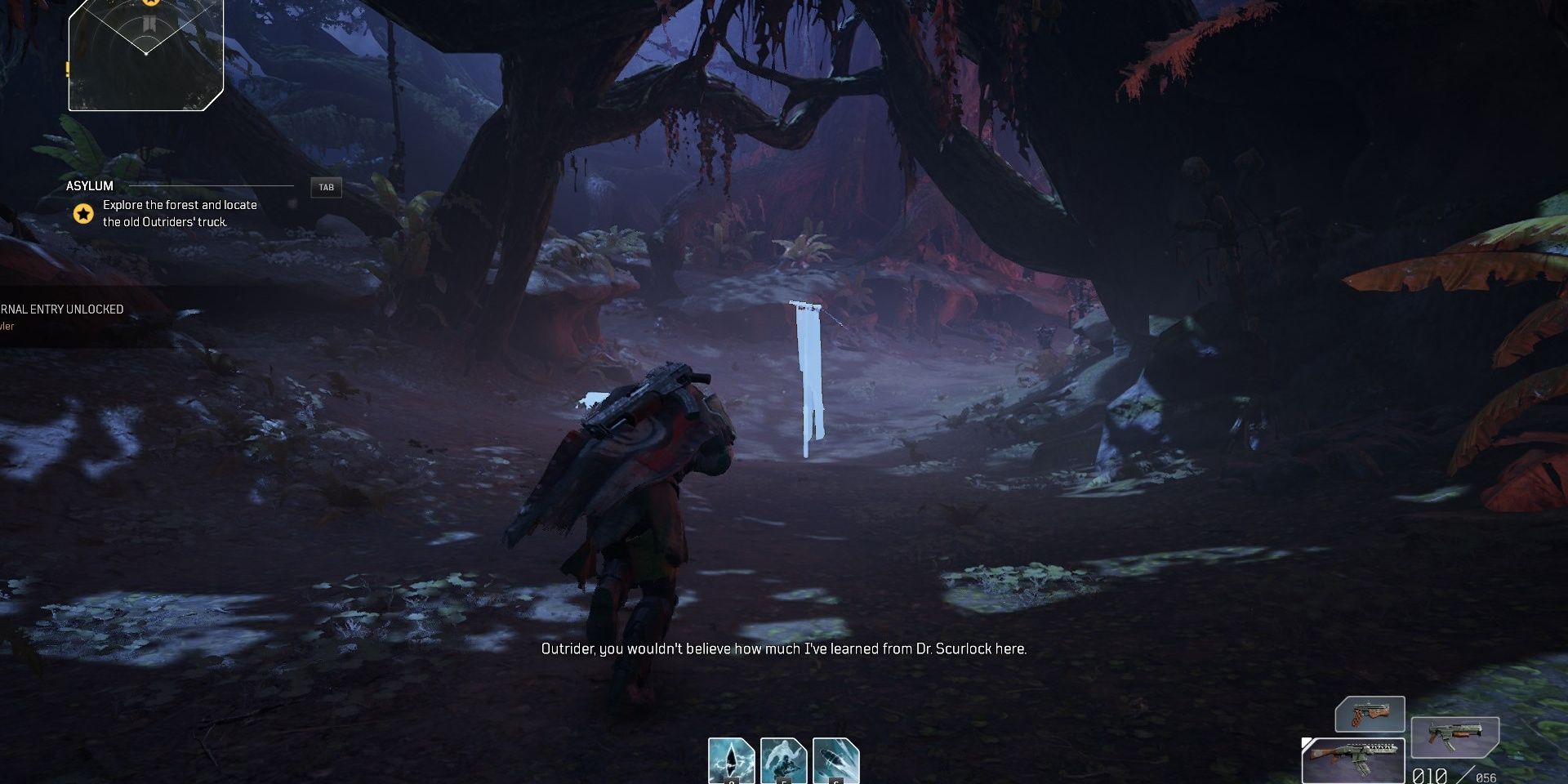 A holographic flag is up ahead. Place a flag, stock up on ammo, then follow the path to your right. 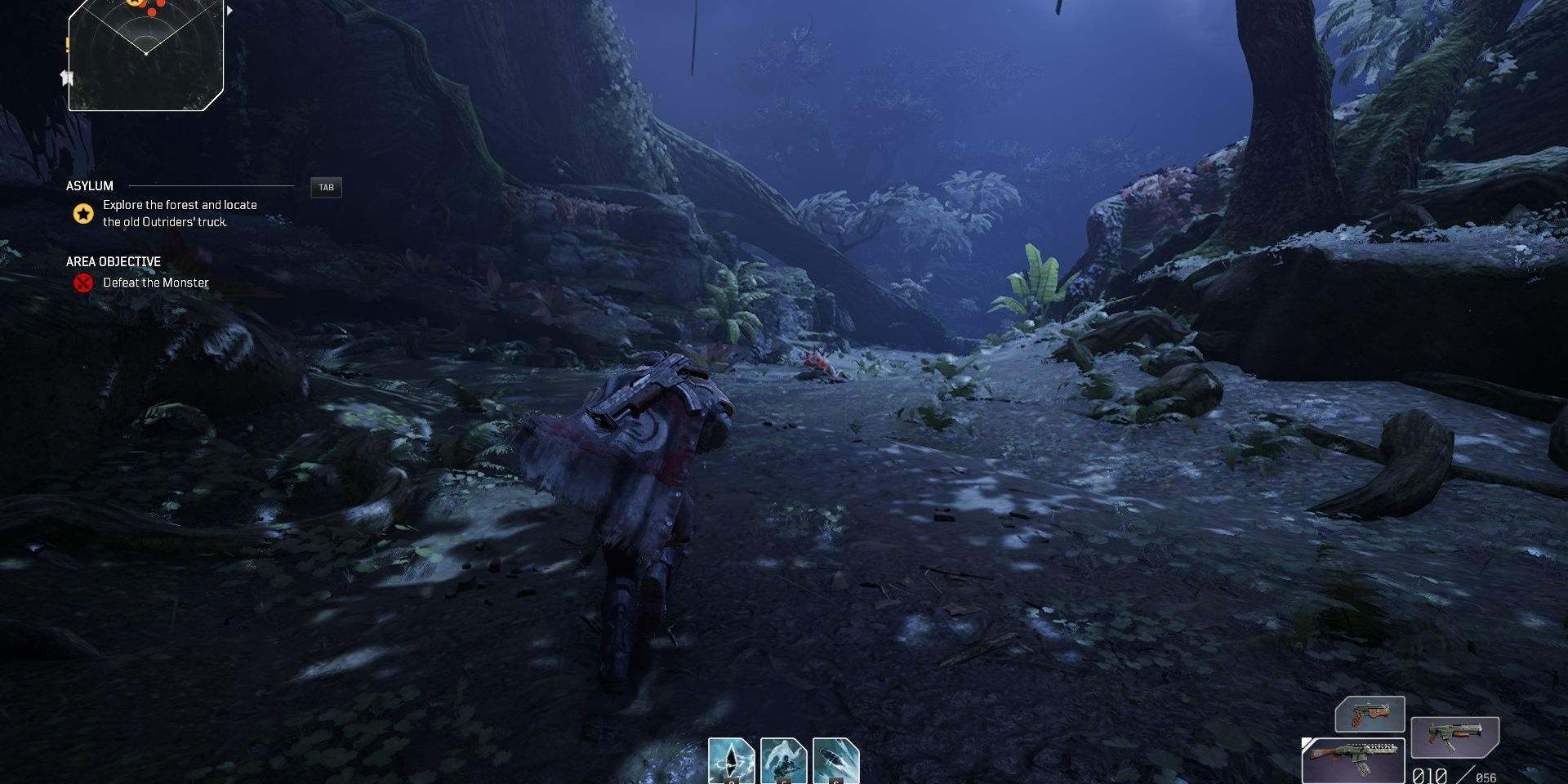 They’ll be a few Perforos up ahead—nothing a few bullets can’t handle. Remember to grab the chest beside the path before continuing. 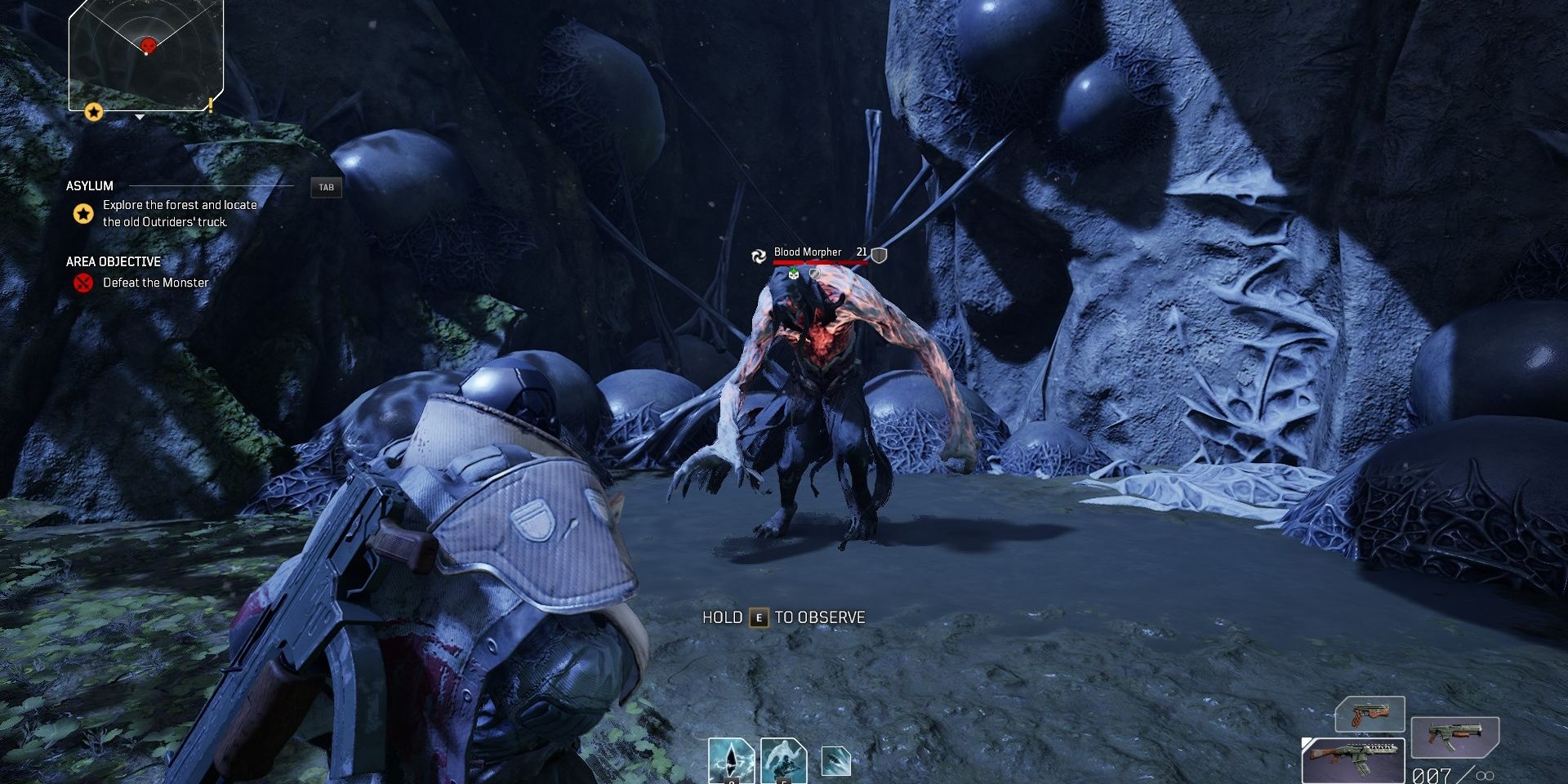 Before you can continue up the path, you’ll have to take on a new enemy type: the Blood Morpher. This enemy is a caster-focused miniboss that summons a barrage of AoE attacks that deal massive damage. It’s also quite fast. Dodging will be key to surviving.

Blood Morphers telegraph most of their ability casts:

The deadliest attack is Impale. When you see the Blood Morpher cast this ability, either melee the miniboss or dodge. If a single Impale hits you, it’s almost certain death at higher World Tiers.

Try to stay as close as possible to the Blood Morpher, forcing the enemy to engage in melee combat. You can easily roll out of the way of its claw attacks. Use your preferred close-range weapon or ability, then nuke this thing’s HP. If you don’t have enough damage to nuke it, either upgrade your equipment or lower your World Tier. 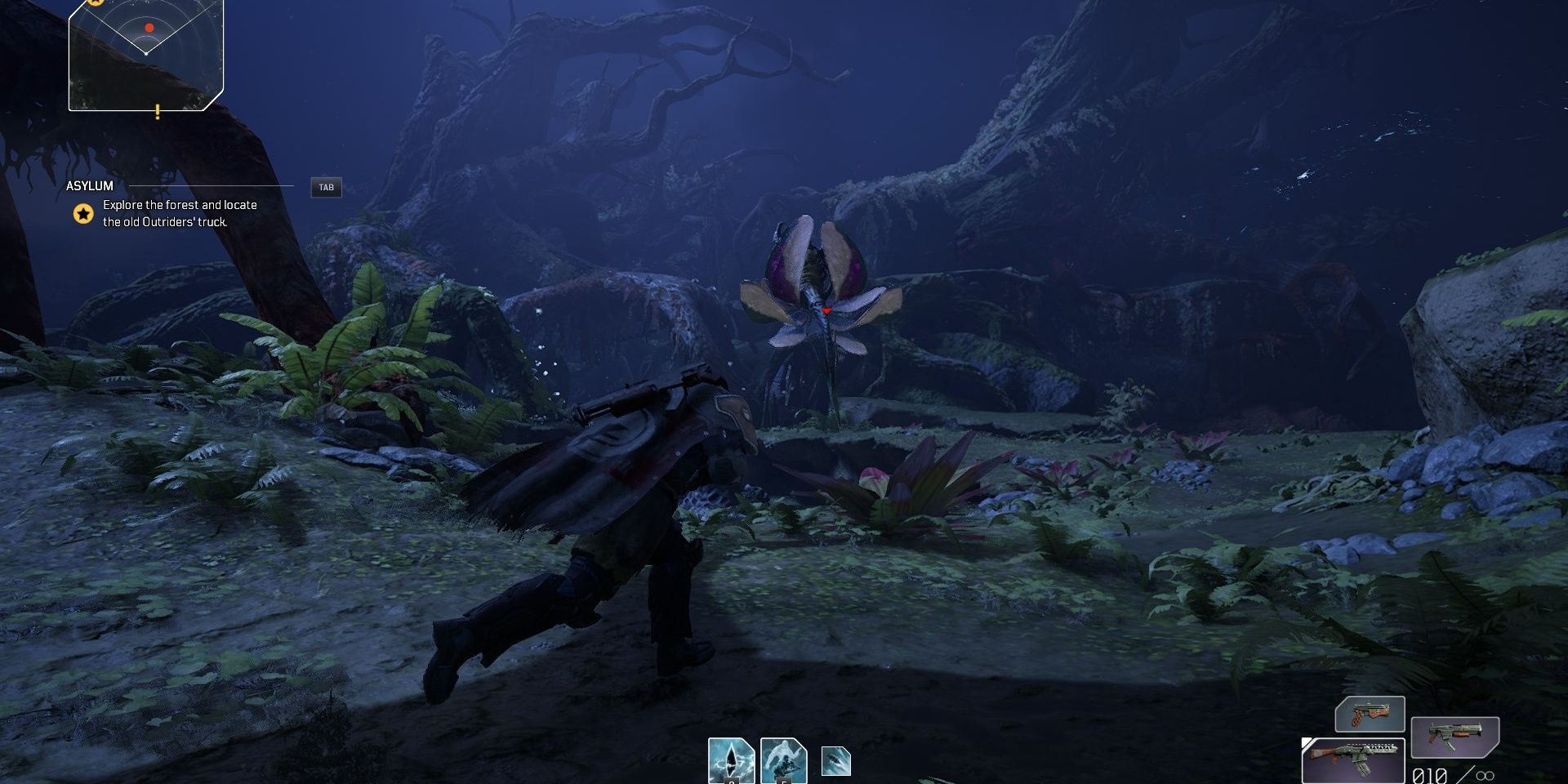 After you’ve dealt with the Blood Morpher, clear out the path and continue. You’ll fight against a few Perforos along the path. At the end of the path is an arena that will spawn multiple Perforos and three Strix. Kill the Strix immediately, using any crowd control effects to slow them down. Clear out the remaining Perforos, then continue along the path. 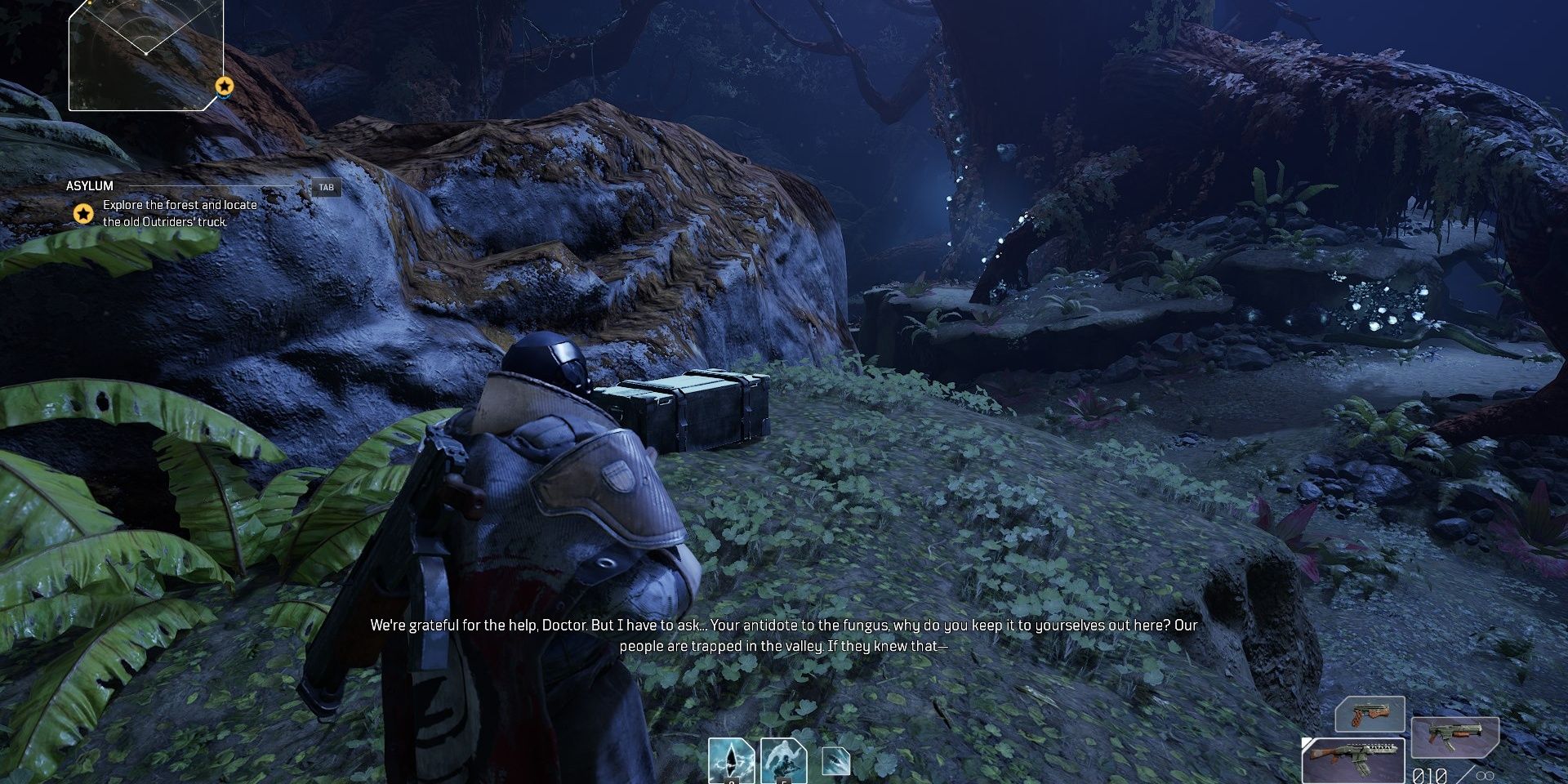 After the Strix ambush, turn around before continuing along the path to find the chest resting beside some rocks. 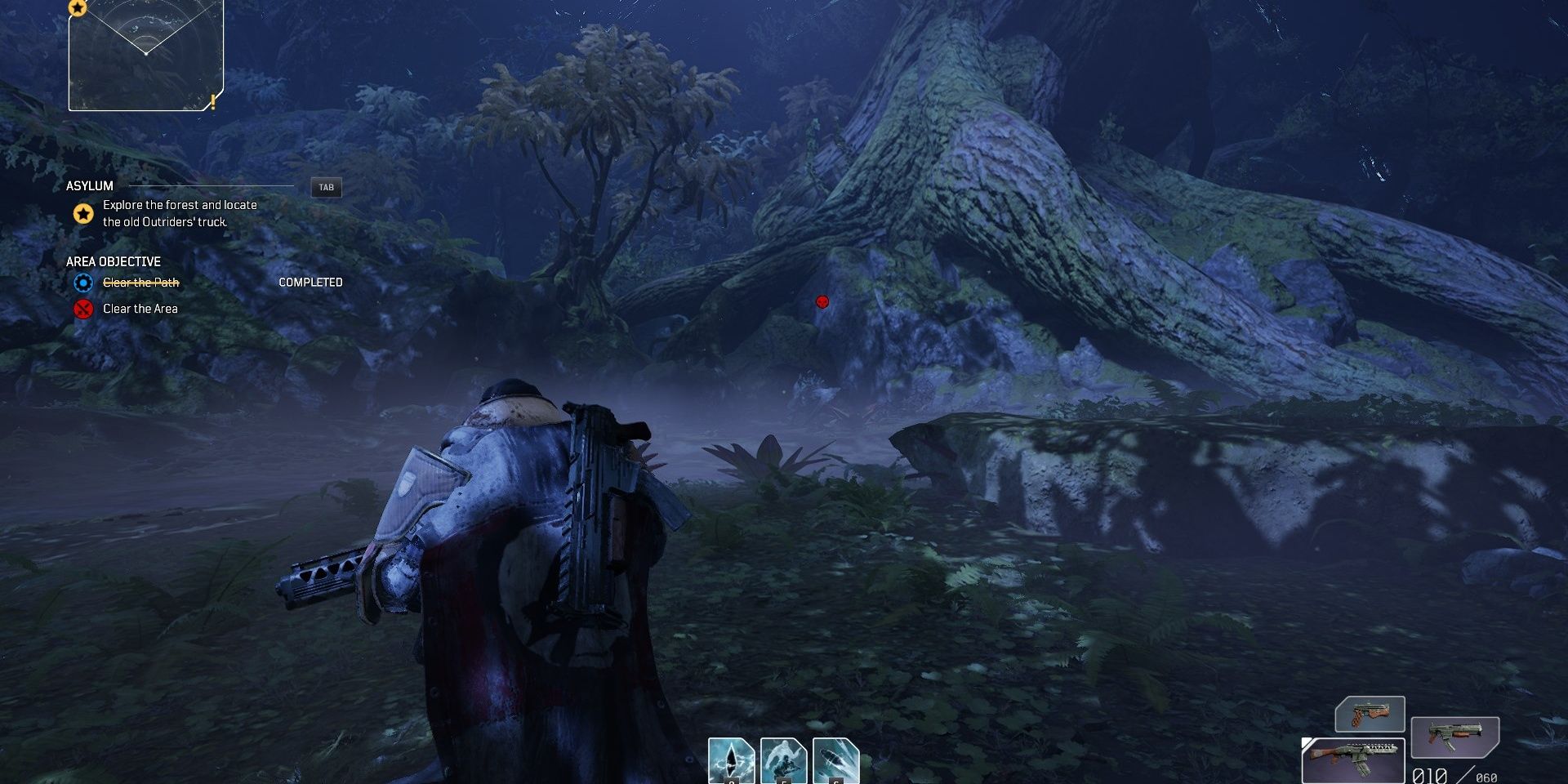 A flag hologram will be present up ahead. Before you can reach it, you’ll need to defeat a Crawler and multiple Beasts. The Crawler should be your top priority, as this enemy can easily freeze you if you aren’t careful. 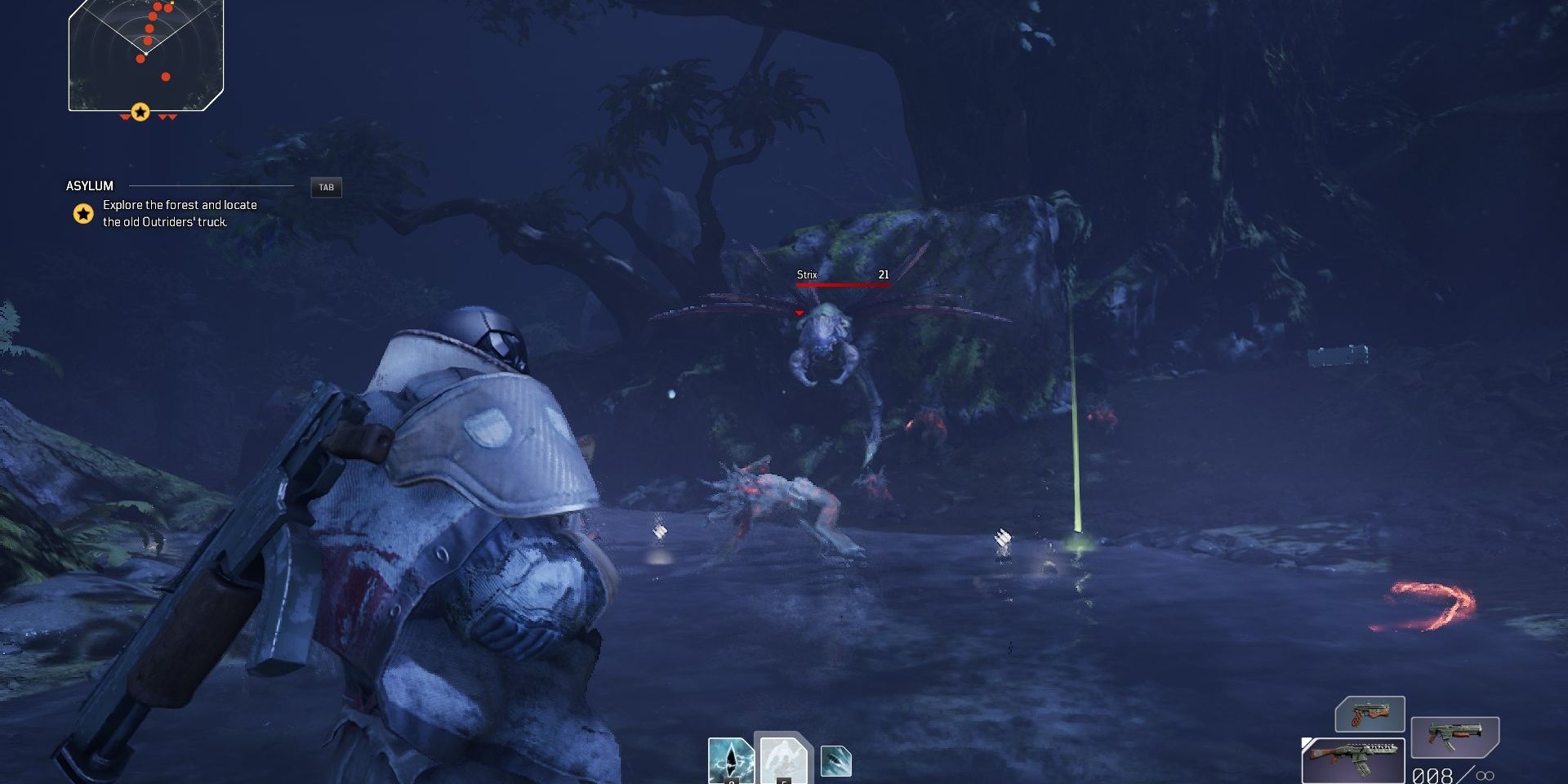 Across the stream will be a group of Perforos and a Strix. The Strix should be slain first, using the Perforos as a means of healing. Clear the path to the flag after you’ve killed all of the Beasts. 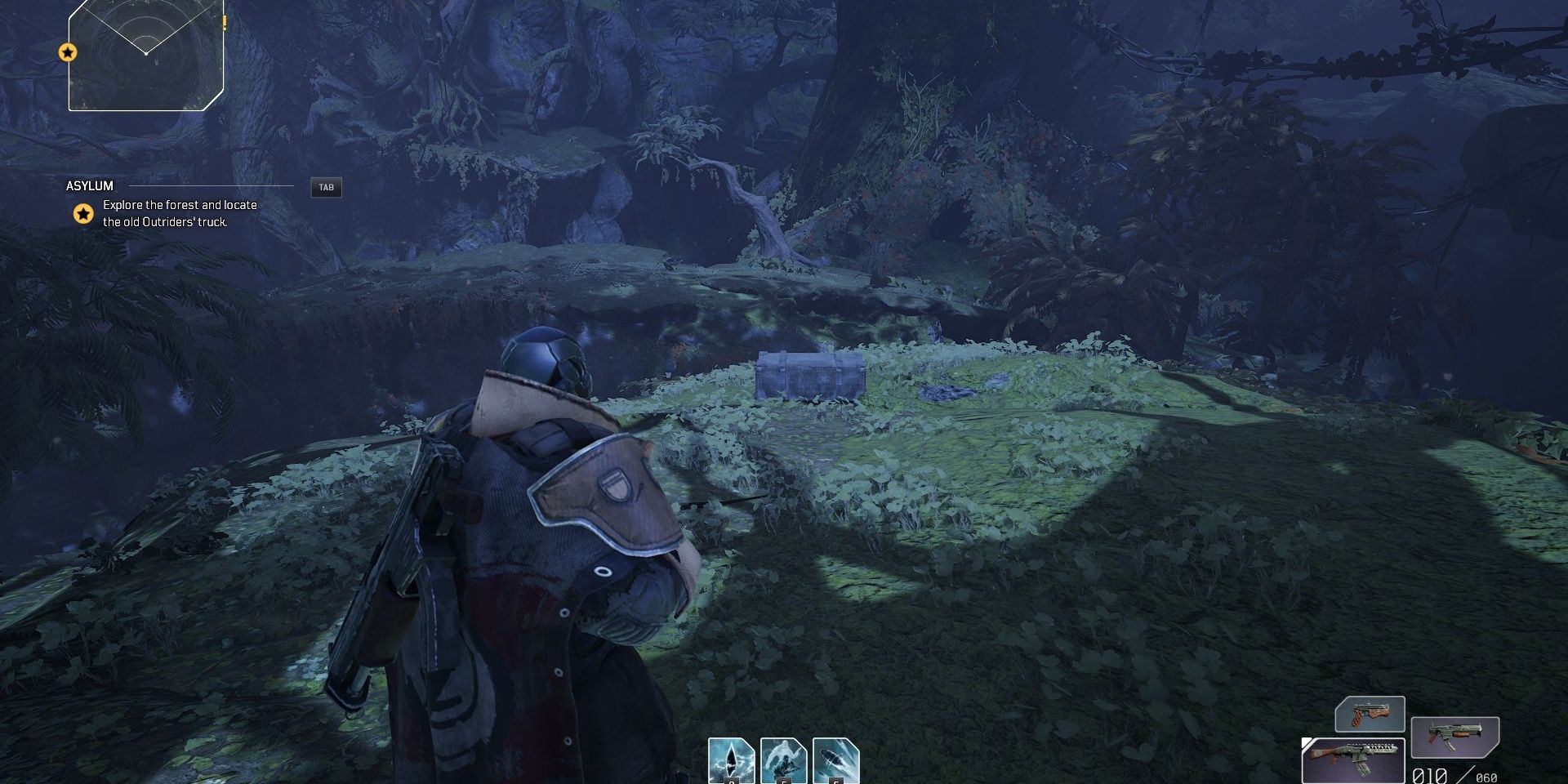 When you place the hologram flag, follow the path on your left. It’ll be up a hill a the end of the path. 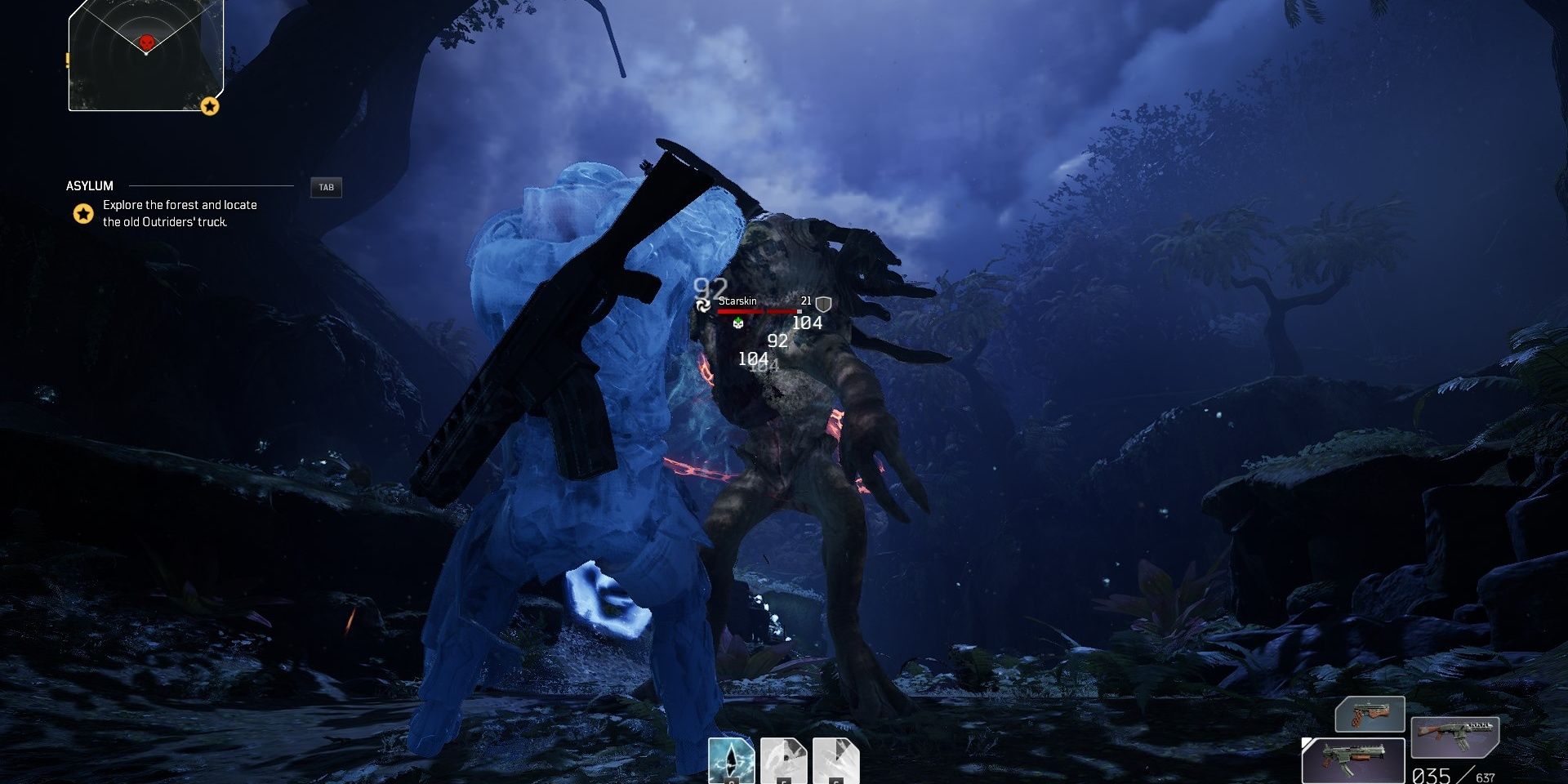 Travel to the path right of the flag. They’ll be one more combat arena before you find the truck. This small arena will spawn fodder Perforos at first. After clearing the first wave, you’ll come face-to-face with a Brood Mother miniboss. It’s named “Scarskin,” although it has the same mechanics as a Brood Mother.

Focus on its heart, as destroying it will prevent the Brood Mother from buffing its allies. This enemy will periodically cover itself in Anomaly armor, reducing all Anomaly damage it takes. In other words, your abilities and bullet skills will deal less damage. Focus on using your guns to break the armor, then use everything in your arsenal to kill it. Use the fodder Perforos to activate your healing mechanic. 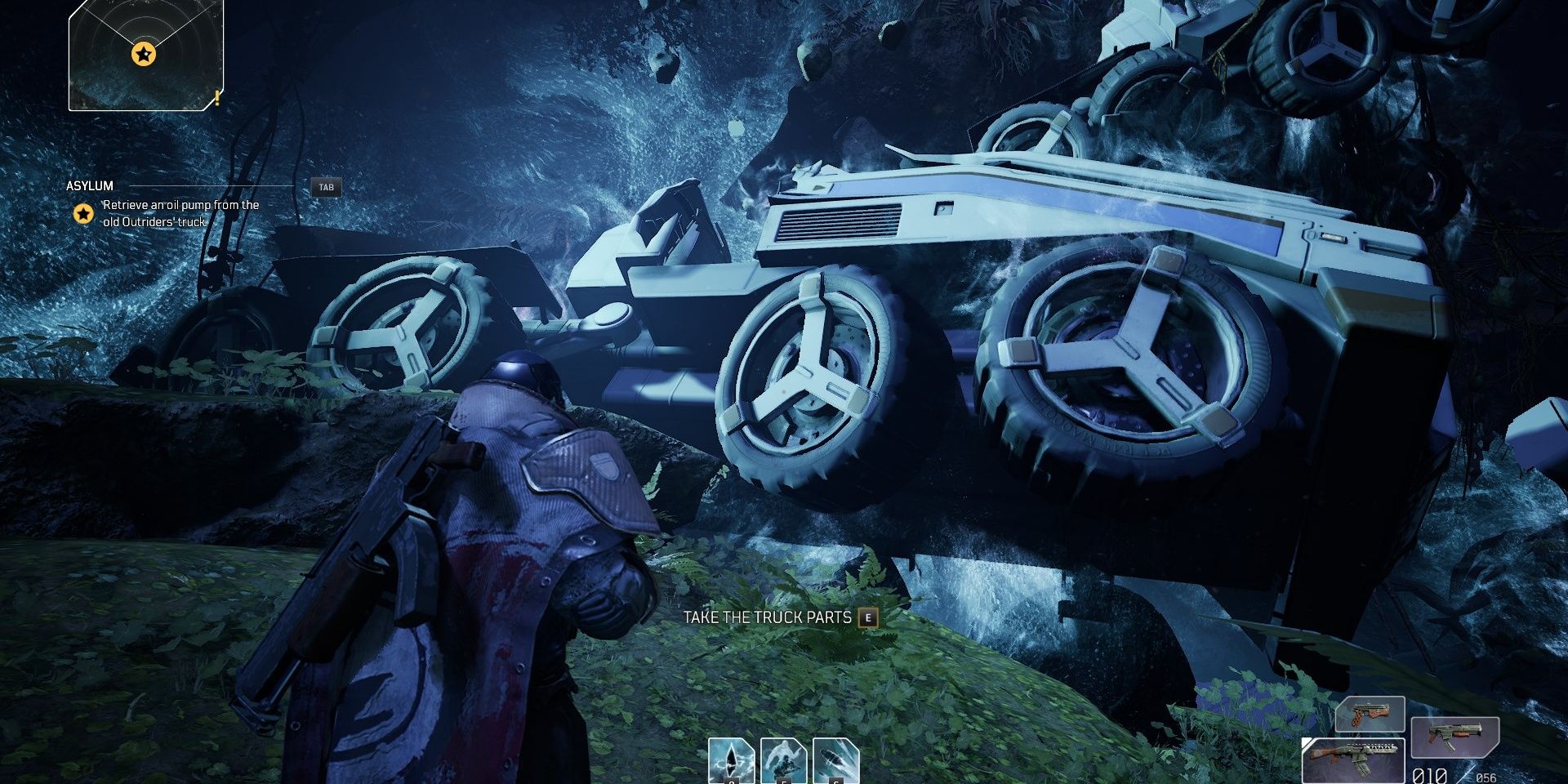 You’ve finally made it to the truck. Grab the parts you need, then fast travel back to the Enclave.

Search The Enclave For Channa 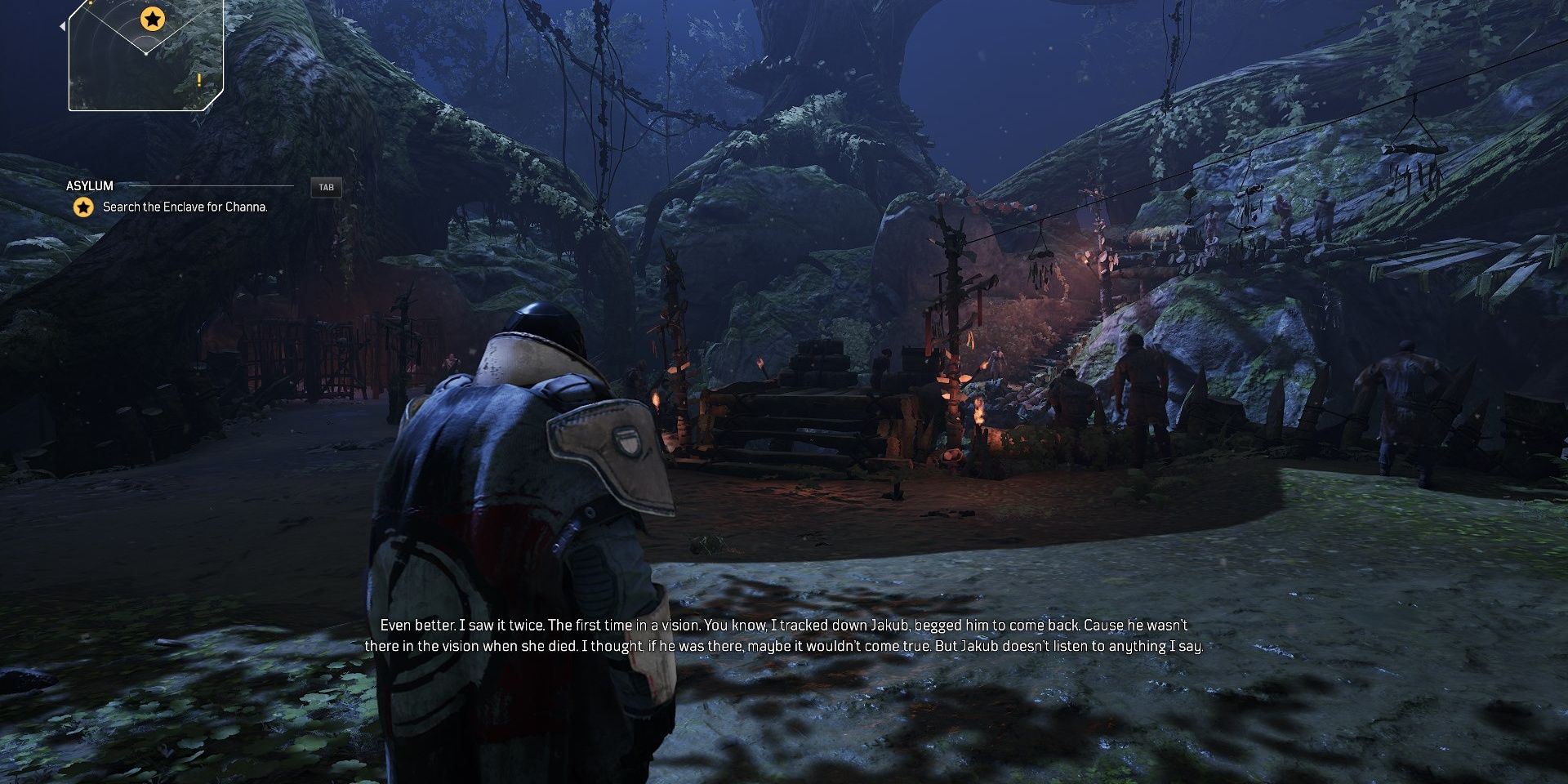 Channa and Jakub got into a heated argument, causing Channa to distance herself at the other end of camp. You can find her just before the gate exit, sitting on a wooden platform right of the main path. Stand next to her and listen to her side of the story. When she’s done talking, rest in your hut at the center of town to finish the quest.

This is your last chance to upgrade your gear. Be sure to upgrade your weapons or swap your mods out before continuing, as you won’t be able to access the crafting system during the next quest.

God Of War: Ragnarok’s Trailer Makes Me Worry The PS4 Is Holding It Back

Why machine learning struggles with causality

Borderlands 3’s next expansion takes place inside a brain