Persona 5 Royal was one of the most acclaimed games of 2020. Pleasing fans and critics alike, this expansion of the original game introduces quality of life updates along with a phenomenal extension of the story. With a new semester to explore and new characters to meet, there are plenty of reasons to return to this franchise.

One aspect of the game that players love in both the base game and Royal is the ability to romance one of several options from the game’s exceptional cast. Who Joker ends up with is entirely up to the player. For many, the back-alley doctor, Tae Takemi, is just too alluring to pass up. Those aiming to win her heart will want to note several key tips to ensure they win this lady’s heart.

Visit the Suspicious Doctor at the Clinic 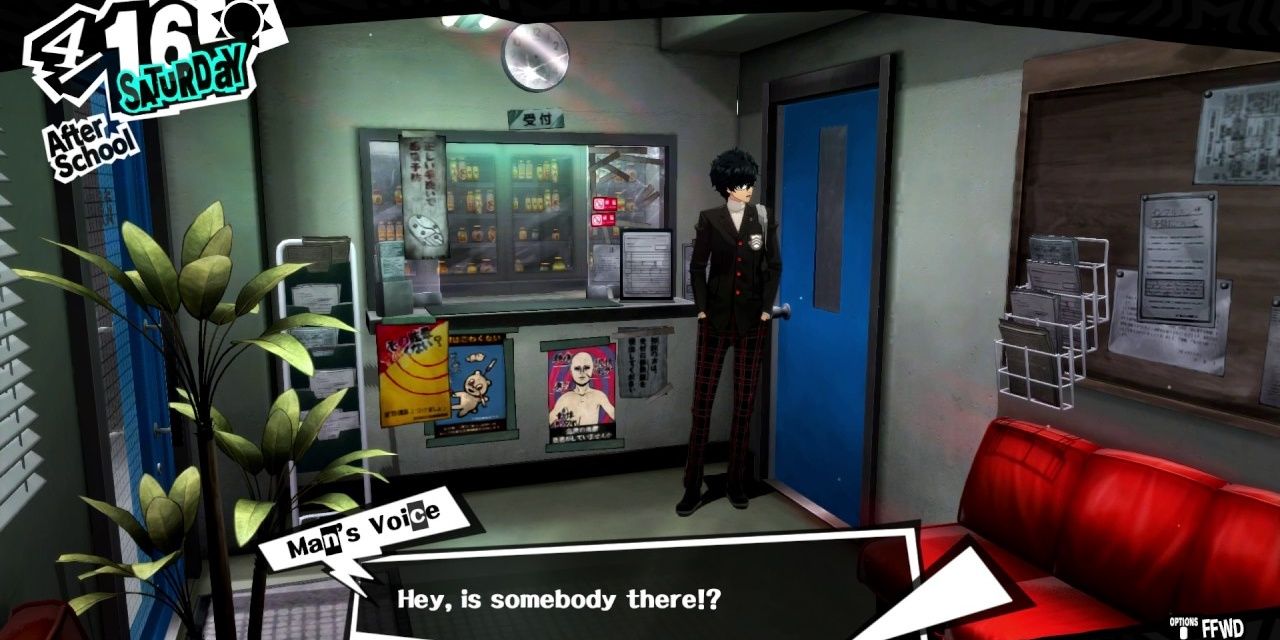 One week after Joker arrives in Shibuya, a woman will come to visit the Leblanc. Sojiro will tell Joker that she’s a local doctor. She can be found just down the street from the cafe. After this conversation, Takemi’s Confidant missions will unlock on 4/16. This is one of the game’s earliest available links, starting before even Ann’s does. Joker should visit as soon as possible, so aim for the next day after school. He’ll eavesdrop on a conversation when he stops by, returning to talk to Takemi about a special type of medicine. 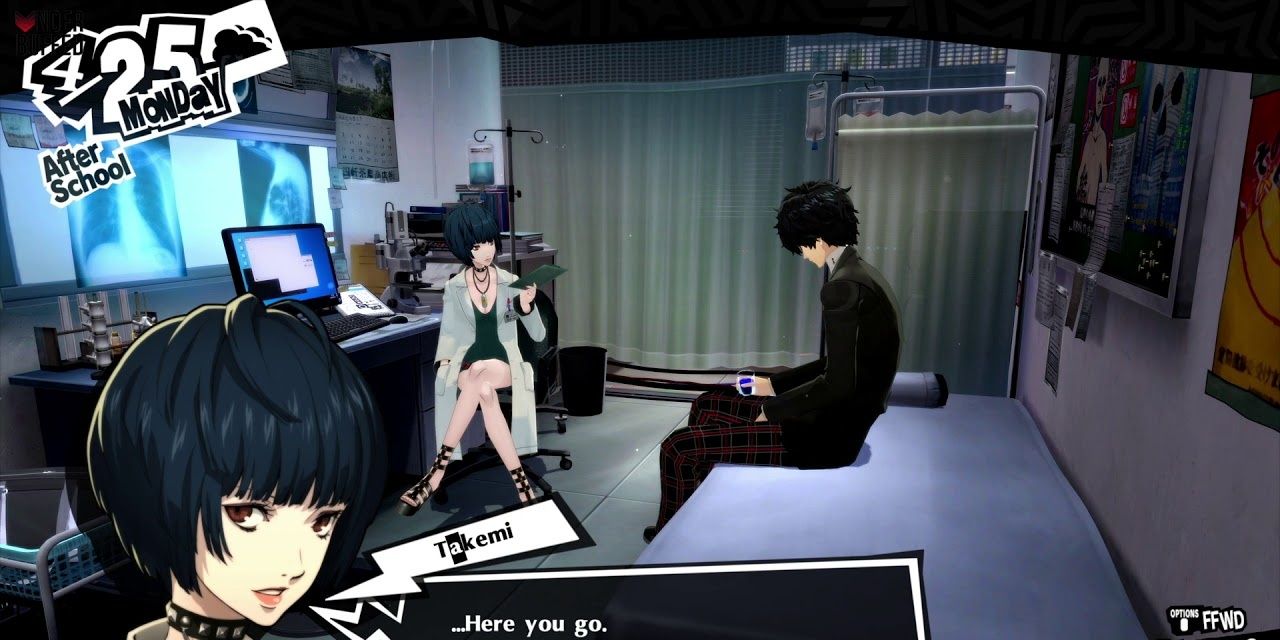 Initially, Takemi will be apprehensive about giving Joker the medicine he requests. After Joker presses her for help, she’ll propose A deal. In exchange for helping her with some clinical trials, Takemi will give him access to a small selection of her medicine. These harrowing tasks will help bolster Joker’s Guts as he participates. Not only are there social benefits in these trials, but this deal will mark the beginning of the Joker’s contract with the back alley doctor and lays the foundation for a budding romance. 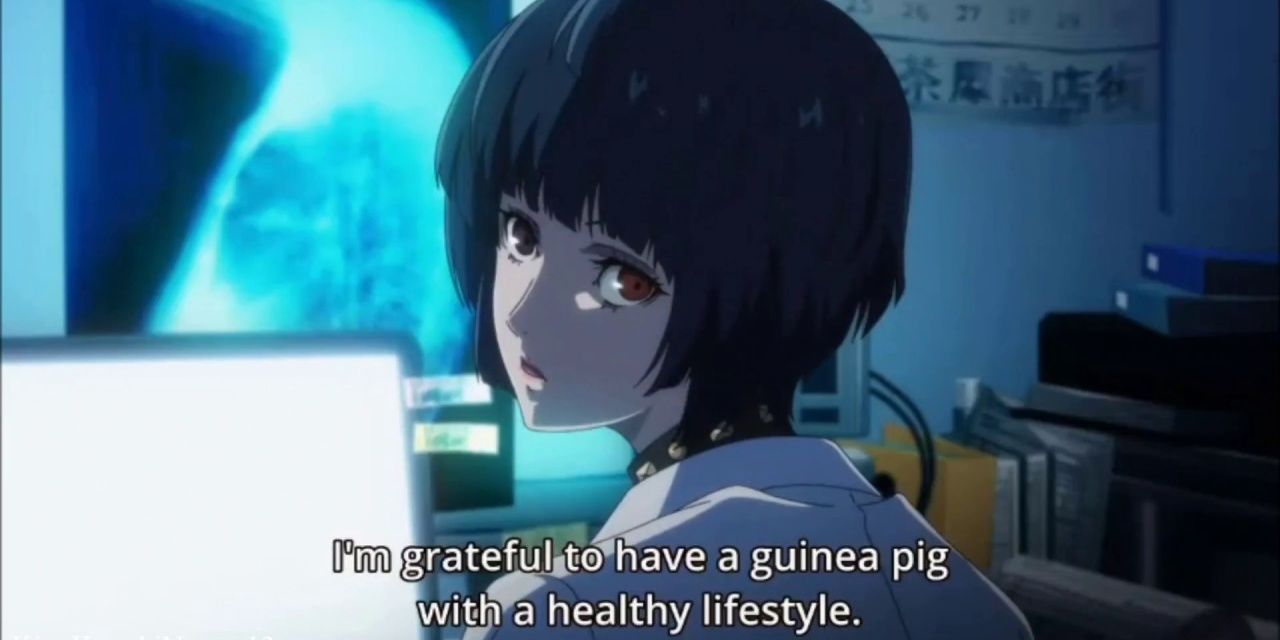 After the first Confidant session, Joker will need to improve his Guts to continue clinical trials with Takemi. As the game opens up, Joker can use his free time to hone his social standing. Keep in mind that the game’s palaces are a priority, so do these before focusing on social stats. Several tasks boost Guts in Persona 5 Royal:

Invite Her Out When Possible 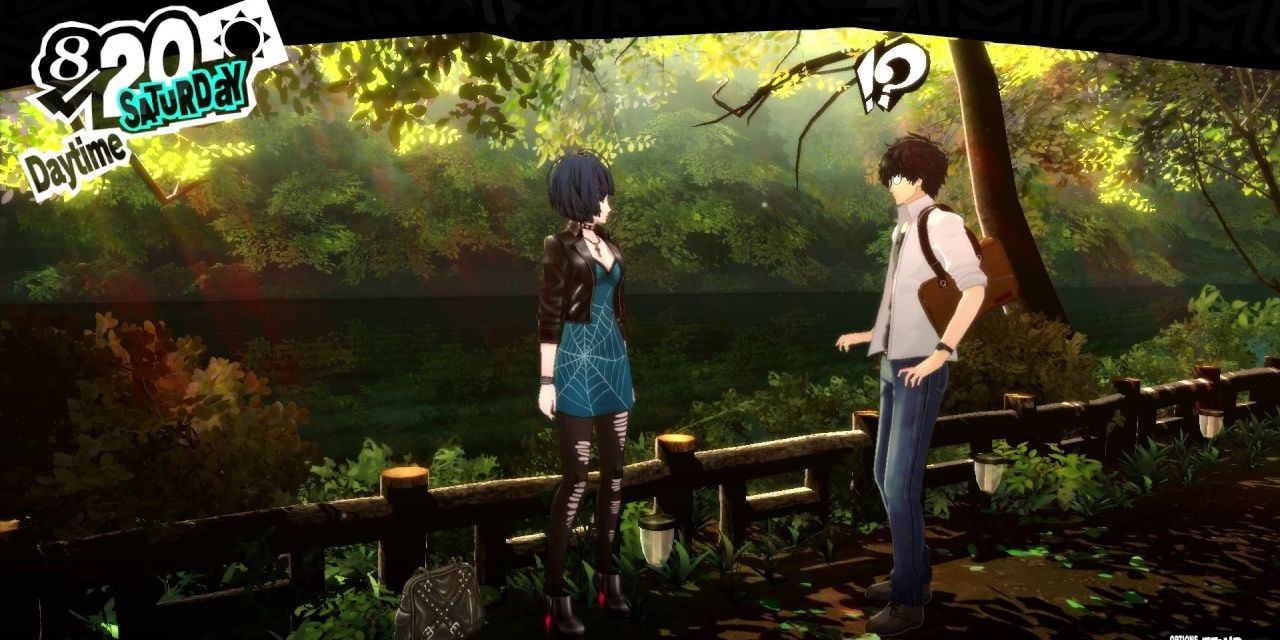 After a few sessions with the back alley doctor, Joker will have the opportunity to spend time with her outside the office. She may ask him to accompany her to the park instead of taking a trial. Take her up on these offers, as they will still boost the relationship between Joker and Takemi. Prioritize these events and build your bond with Takemi as soon as possible. There is plenty of time to hit max rank with her, but moving towards this goal quickly is favorable, as it removes room for error. 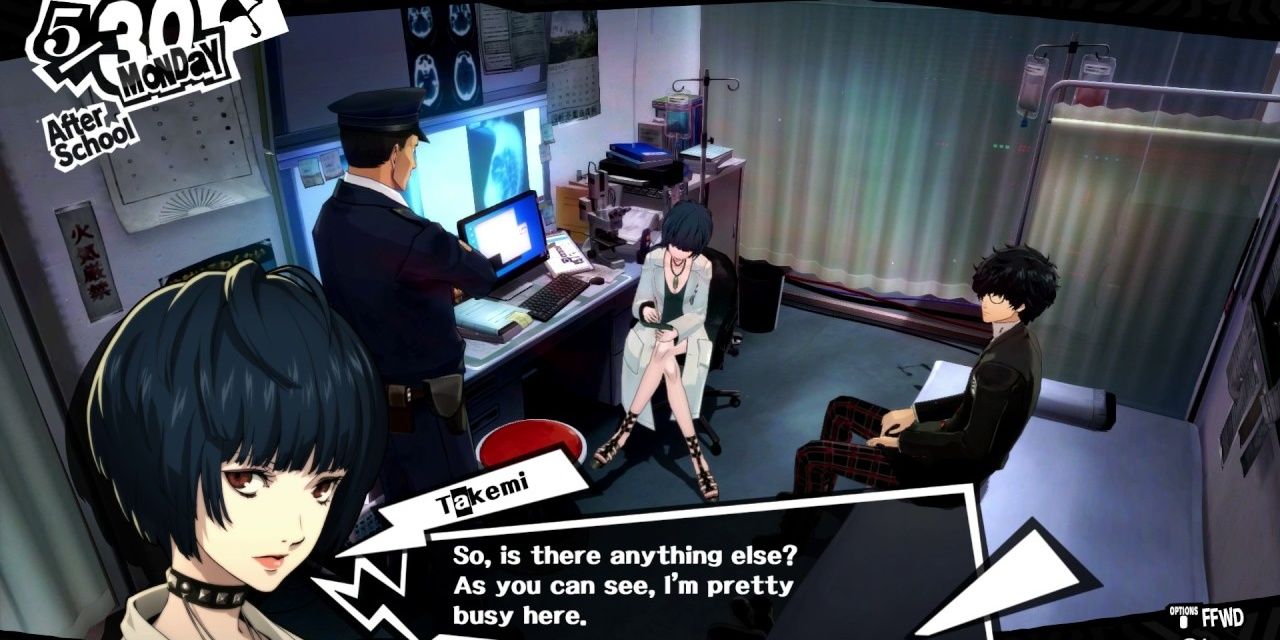 Spending some time with Takemi helps Joker understand why she is so focused on creating medicine from her clinical trials. She wants to help a sick child who was once her patient. Each trial gets her one step closer to her goal of helping a girl named Miwa. When rank 7 of the Death Arcana, there will be another social stat requirement before Joker can progress further. At this point, level 4 Charm is necessary. Take part in the following tasks throughout your playthrough to prepare for this stopgap in Takemi’s link: 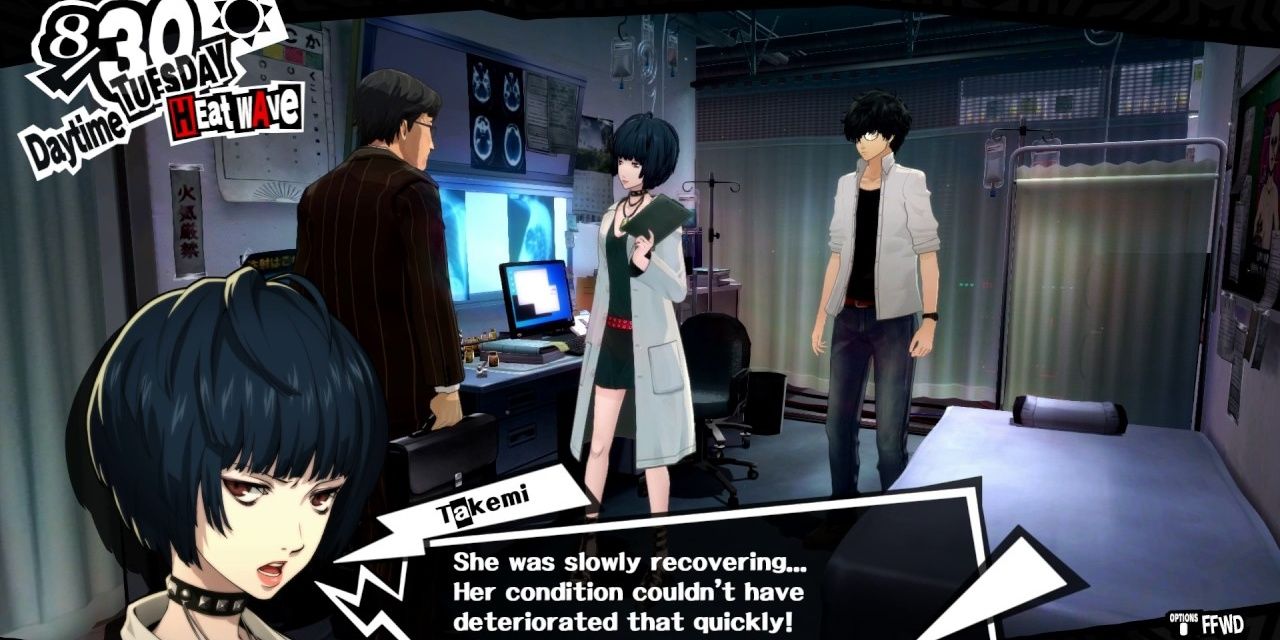 After hitting Charm level 4, the second half of rank 7 unlocks. At this point, a nefarious doctor comes to harass Takemi and claims Miwa died. Joker and the Phantom Thieves will have to head into Mementos and take down this target to progress past Takemi’s seventh Confidant rank. This mission is located in the Path of Chemdah: Area 2. Take a day to clean up any outstanding Mementos requests alongside this mission, as this is a relatively easy enemy. Once the shadow is defeated, Joker can head back and talk to Takemi to progress her link to level 8.

Give Straightforward Answers in Conversation 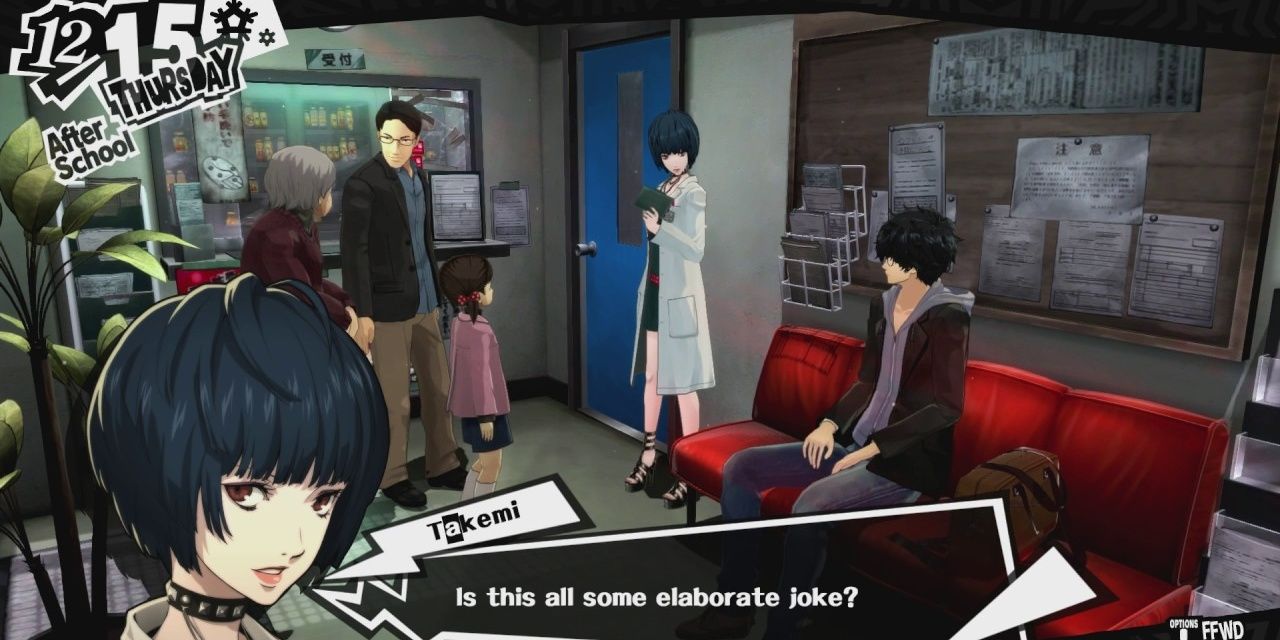 Make sure when talking to Takemi to give her the truth, plainly. Any deviation from this often leads to an unfavorable outcome for social points. Avoid beating around the bush with this Confidant, as she prefers the direct approach. Those interested can pepper in some flattery but don’t overdo it, as those options are almost always pale compared to the straightforward strategy. 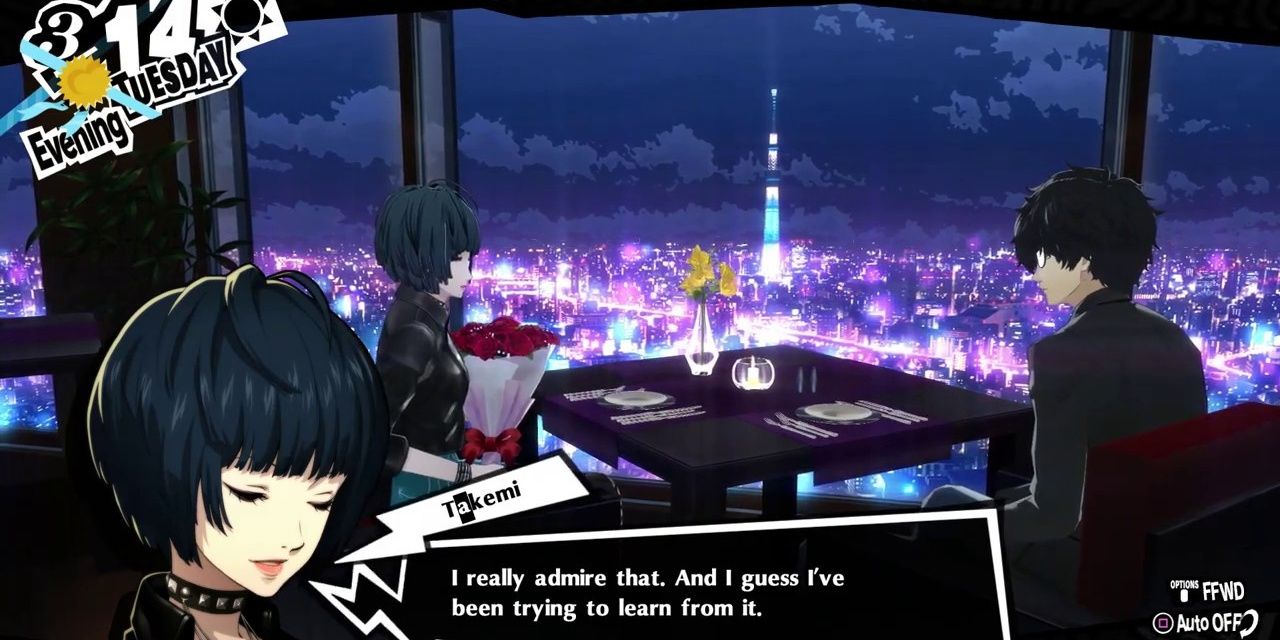 As with any romantic partner in Persona 5 Royal, Takemi loves receiving thoughtful gifts. They serve to avoid the unfruitful sessions that can occur when Joker lacks the social standing needed to hit the next rank. Keep the following items in mind, as they are favorites for this doctor: 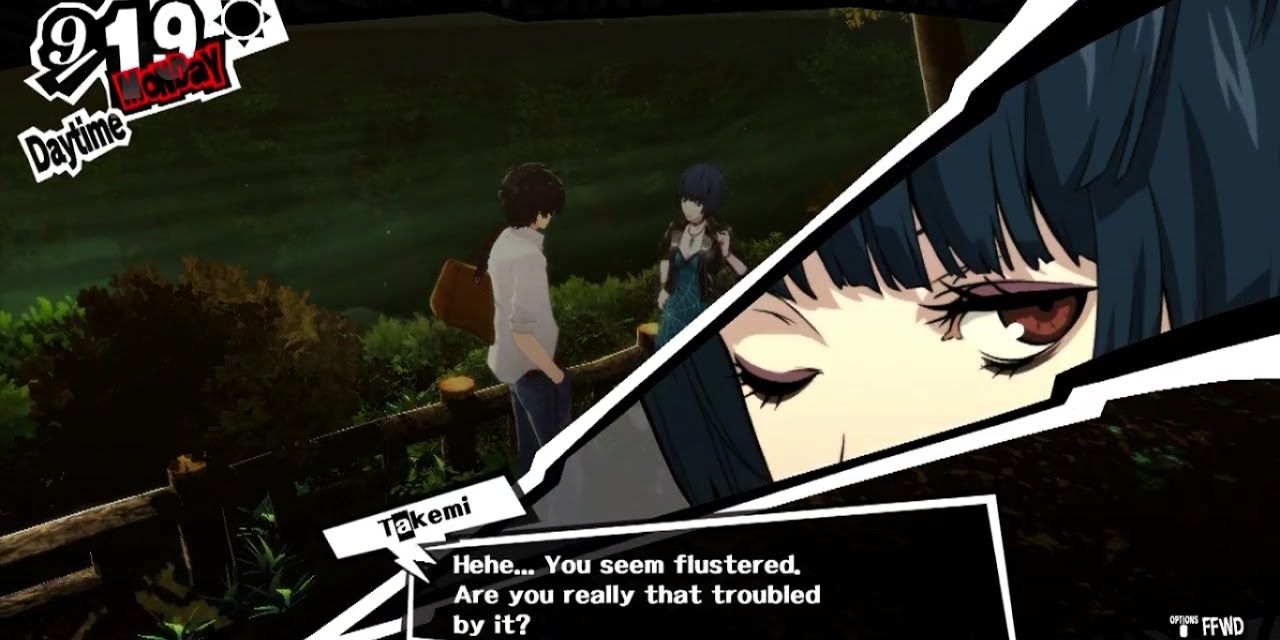 After Joker helps take down the doctor tormenting Takemi, she’ll ask why he did so much for her. Using the excuse for exams won’t work here, and players will want to be upfront with Takemi. For response 3, tell her, “I wanted to see you,” to have Joker pursue her as a romantic partner. Takemi won’t let Joker off easily and makes him tell her how he feels multiple times. Follow this statement with “I love you” to press her one step closer to accepting the romance. Finally, when she asks whether this is a joke, say “It isn’t a joke” to ensure she truly believes Joker wants to be with her. From this point on, Joker will be in a relationship with Takemi.

Invite Takemi Over for One Last Visit 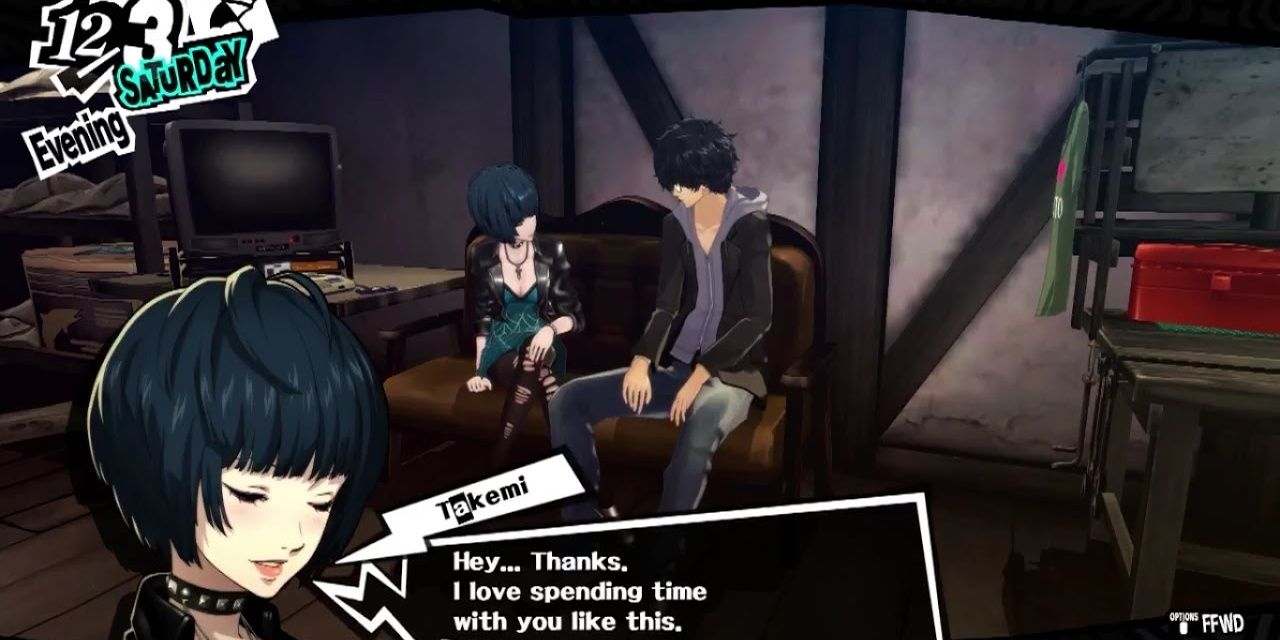 Once Joker convinces Takemi that he’s serious about her, all that remains is to invite her out one last time. Please take the opportunity to spend time together and hear how Takemi feels about her and Joker’s budding attraction. Choose the options “I wonder. . . ” and “Yes, Please.” for this conversation if you want the highest social points possible, though there isn’t anything that can stop the bond from reaching completion at this point.

Next: Persona 5 Royal: How To Romance Haru

Can You File a Bankruptcy Without a Lawyer – 2020 Guide

Disney+ Had 95 Million Paid Subscribers, And That Was Before WandaVision

Fortnite: Khanada Takes Aim At Bugha Over FNCS Result And DreamHack, But Why?

Minecraft Realms Down: Servers not working on Bedrock, Mojang confirms