The Mercenary is arguably the hardest survivor to play in Risk Of Rain 2. Let’s take a look at how to unlock him, his abilities and best items, and some tips and tricks for doing the best as Mercenary. 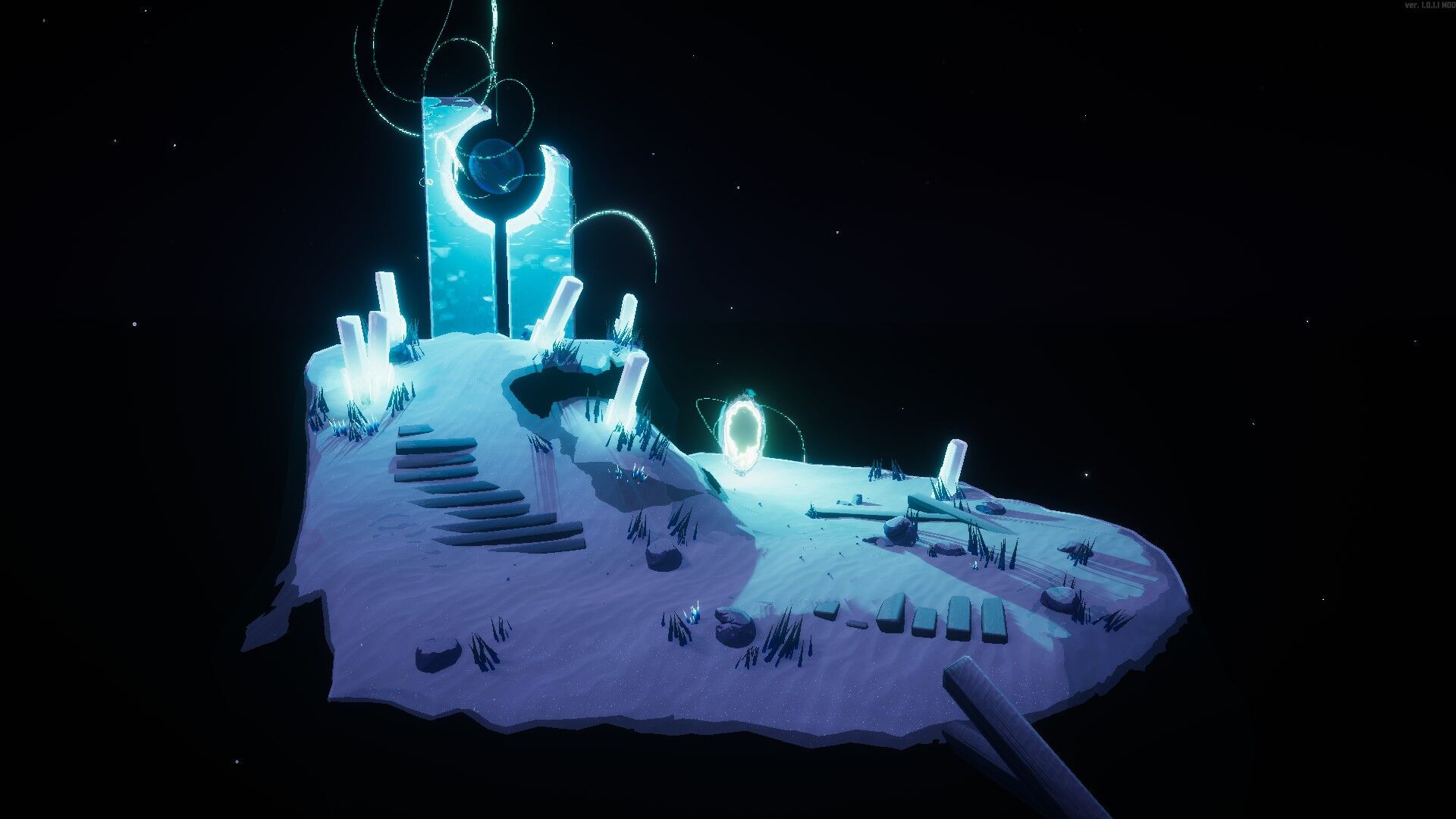 To unlock Mercenary, you have to Obliterate yourself at the Obelisk. This is one of the more difficult challenges to complete; you have to complete stage 8, then go through the Celestial Portal that appears. This involves switching the location of the teleporter on the 5th stage to send you to A Moment, Fractured. There you will find the Obelisk, which interacting with will Obliterate you and end your run, unlocking Mercenary. 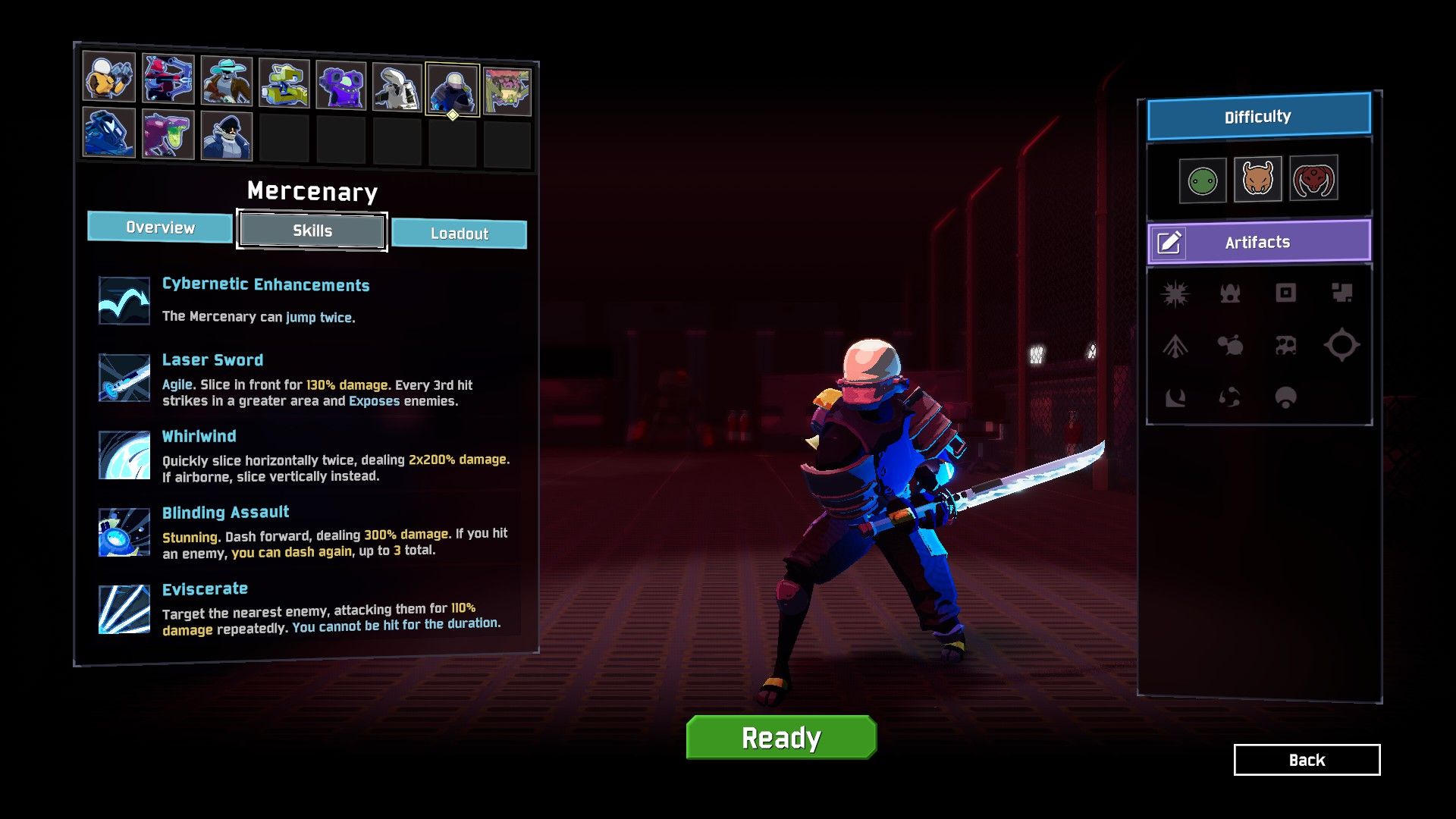 The Mercenary has powerful close range attacks, dashes to get around the battlefield, and invulnerability during his Special. Here are his default abilities.

Primary: Laser Sword. Agile. Slice in front for 130% damage. Every 3rd hit strikes in a greater area and Exposes enemies.

Utility: Blinding Assault. Stunning. Dash forward, dealing 300% damage. If you hit an enemy, you can dash again, up to 3 total.

Special: Eviscerate. Target the nearest enemy, attacking them for 110% damage repeatedly. You cannot be hit for the duration. 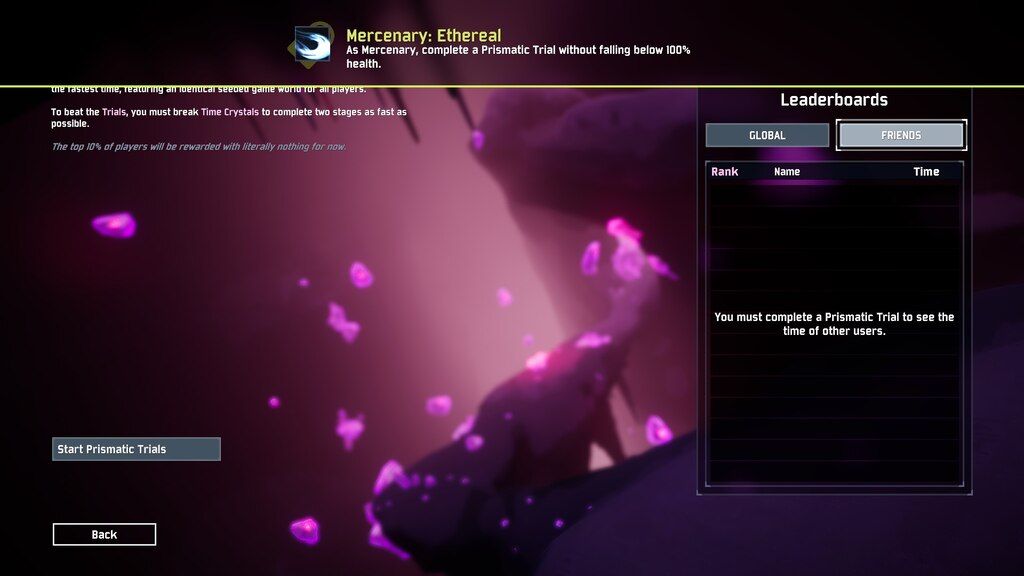 Mercenary has three additional abilities to unlock, replacing his secondary, utility, and special. These abilities require you to complete special challenges to unlock.

Unlocks from completing the ‘Mercenary: Demon of the Skies’ Challenge – As Mercenary, don’t touch the ground for 30 seconds.

Unlocks from completing the ‘Mercenary: Flash of Blades’ Challenge – As Mercenary, use 20 abilities in 10 seconds.

Special: Slicing Winds. Fire a wind of blades that attack up to 3 enemies for 8×100% damage. The last hit Exposes enemies.

Unlocks from completing the ‘Mercenary: Ethereal’ Challenge – As Mercenary, complete a Prismatic Trial without falling below 100% health. 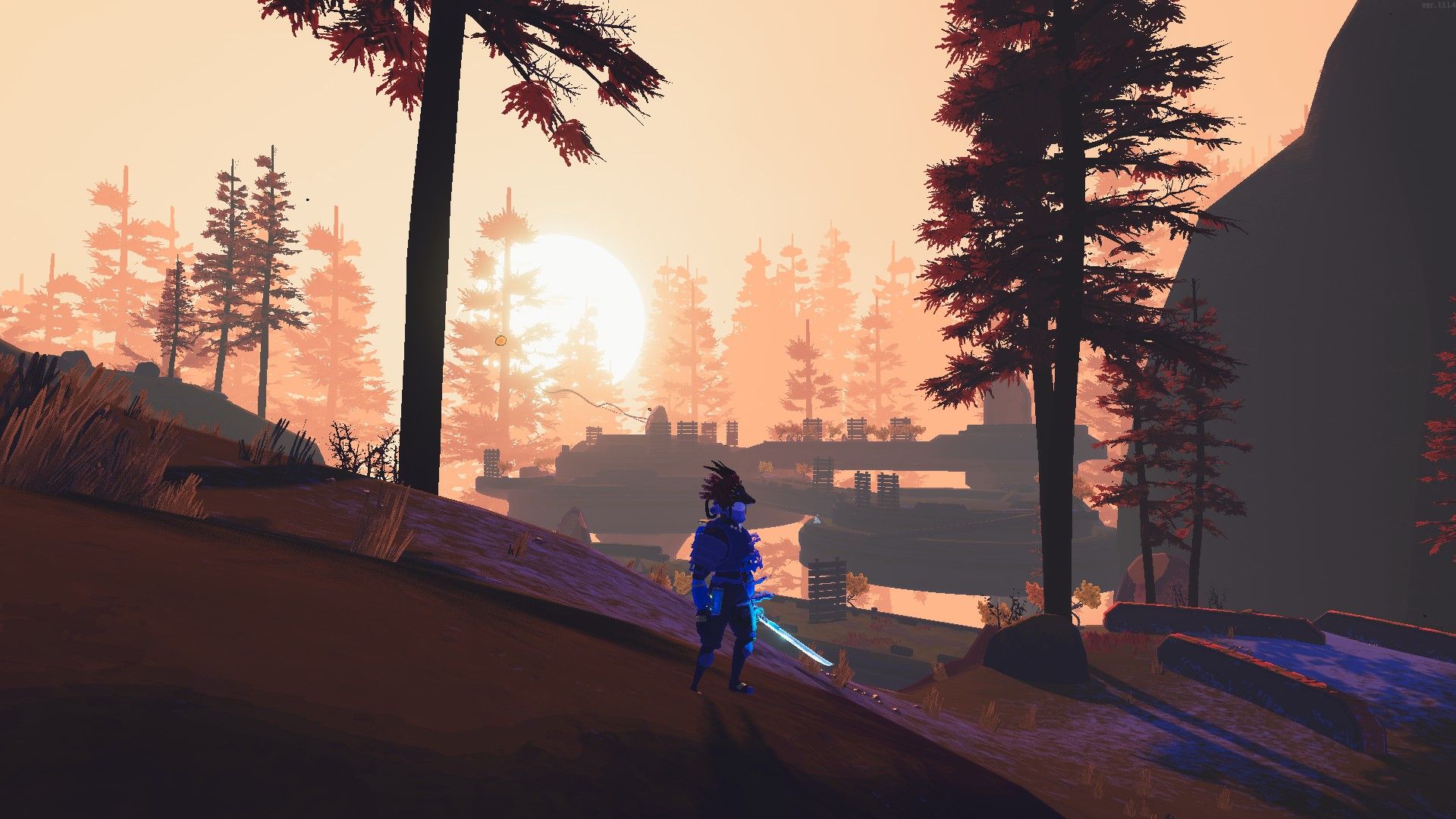 Mercenary is a melee survivor with high damage but low survivability. Choosing items that play to his strengths and balance out his weaknesses will prove to be the best strategy for playing as this character.

Mercenary’s Special ability Eviscerate scales its hits to your attack speed without increasing the duration of the ability. This means getting items that grant lots of attack speed will greatly increase the power of Eviscerate, as well as allowing you to incorporate other on-hit effects like Sticky Bomb or Charged Perforator.

Soldier’s Syringe: This item is a staple for increasing attack speed, which will increase the damage of Eviscerate, and allow you to apply Expose faster with your Primary attack.

Focus Crystal: Mercenary is a melee survivor, so all his abilities will greatly benefit from Focus Crystal’s damage boost. This item doesn’t work nearly as well on any other survivor.

Backup Magazine: Having additional uses of Whirlwind will help with mobility and aerial damage. However, you only need a few to get the most use out of them.

Leeching Seed and Harvester’s Scythe: Both of these items provide a similar effect when used with Mercenary; to grant a large amount of health when using Eviscerate and Whirlwind. Harvester’s Scythe needs support with Critical Strikes, but Lens-Maker’s Glasses should be used on any survivor regardless.

Rose Buckler: Because Mercenary’s Primary attack can be used while sprinting, Rose Buckler’s bonus armor will almost always be in effect, making it one of the best defensive items for this survivor.

Hardlight Afterburner: This item is great for Mercenary because it will grant more uses of his Utility. Using this with Blinding Assault will let you stay in the air almost indefinitely. Alternatively, using it with Forced Assault will make its effect more similar to Blinding Assault, letting you dash three times in a row, but will also let you Expose each enemy hit.

Brainstalks: Mercenary relies heavily on repeated use of his abilities to stay alive and deal damage. Brainstalks will reduce cooldowns to 0.5 seconds after killing an Elite Enemy, which is incredibly strong in the late game where most enemies are Elite. However, this item will make items like Backup Magazine and Hardlight Afterburner obsolete, so don’t use them together. 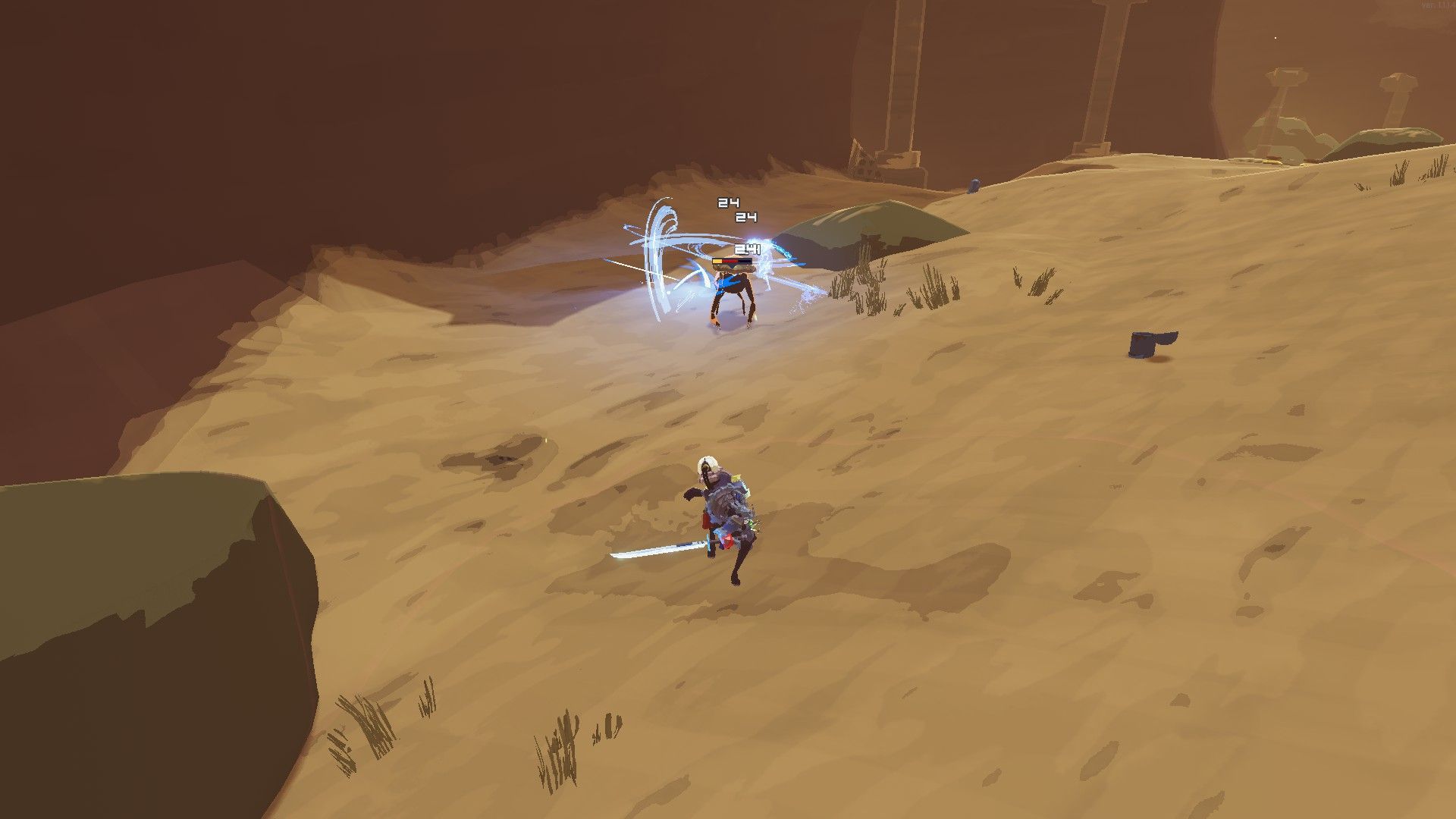 Mercenary is quite challenging to play as; his playstyle is very different from every other survivor. Having to constantly be in melee range means being exposed to more enemy attacks, making Mercenary die easily if you aren’t careful.

The third hit of Mercenary’s Primary Ability will Expose enemies. This Mercenary-exclusive effect will apply a mark on enemies, which when struck will reduce cooldowns by 1 second, and deal an additional 350% damage.

Mercenary’s Primary Ability can also be animation canceled. After the third strike, there is a slight delay before you can attack again. This delay can effectively be canceled if you use Whirlwind immediately after, which will allow you to keep attacking with virtually no downtime.

More attack speed is good, but only up until a certain point. Because of the way Mercenary’s abilities work, increasing attack speed also increases the range and speed of his abilities. While this might seem like a good thing, it can actually be detrimental for his Secondary and Utility. Higher attack speed means Whirlwind will send you even further when used on the ground, making it hard to hit enemies. The same goes for Blinding Assault, which can be hard to aim when you are moving so fast.

While Mercenary’s abilities may seem straightforward, there are some niche cases and intricacies when it comes to actually using them, especially when considering which ability to choose. Whirlwind is better than Rising Thunder because it strikes twice instead of once. Although Rising Thunder is easier to use and provides a bit more safety by launching enemies away, Whirlwind has way more uses and provides much-needed AoE for Mercenary. 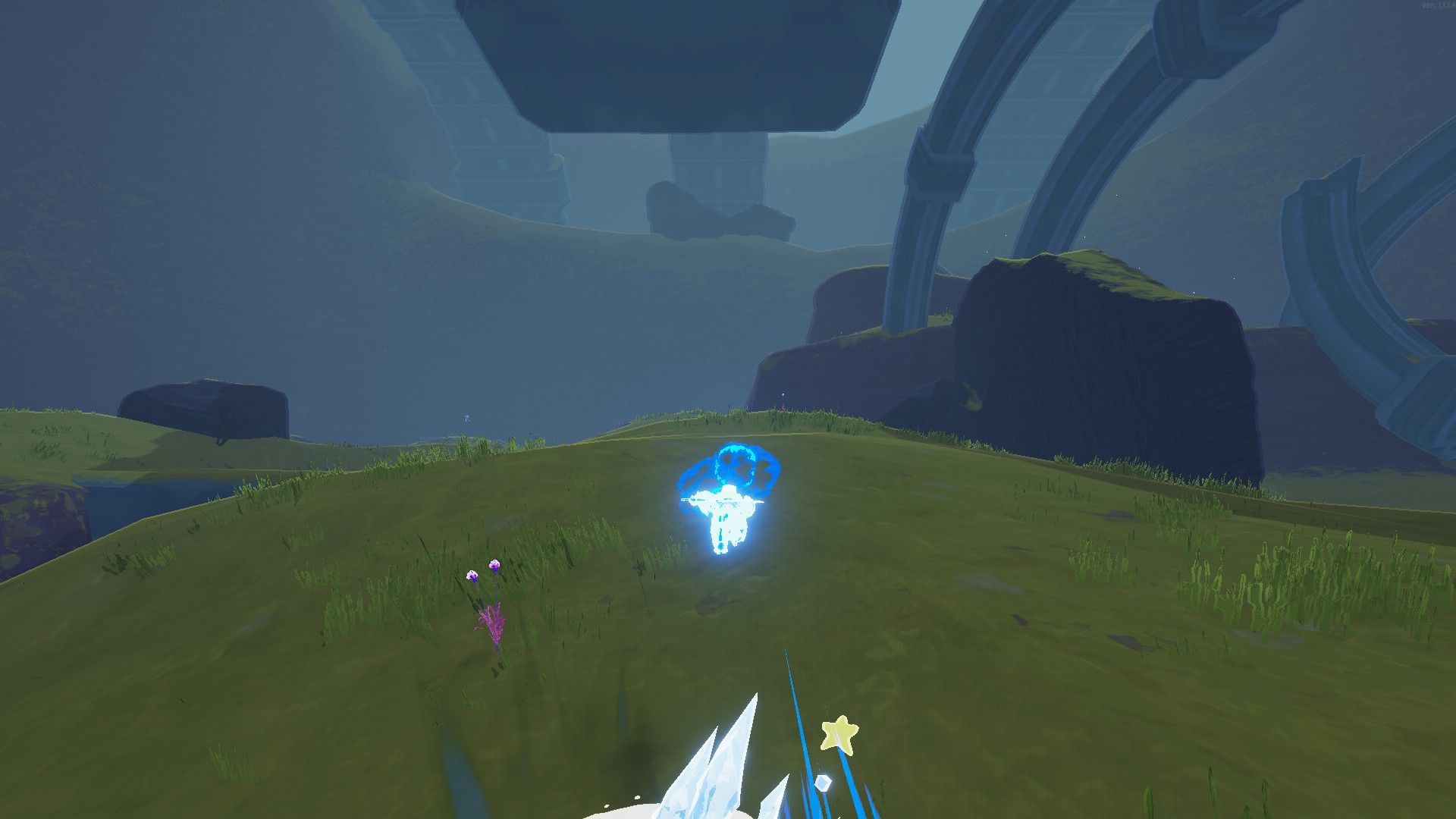 Choosing between Eviscerate and Slicing Winds ultimately comes down to preference. They are both very powerful abilities on short cooldowns, but they both function differently, depending on your playstyle. Eviscerate is the safer option as it grants invulnerability and scales better with attack speed. However, Slicing Winds can also be a safe option because of its unlimited range, and the fact that it can strike three enemies at once gives it the edge when it comes to groups of enemies. You can’t go wrong with either, so choose the one you like to play with best.

Playing as Mercenary is a challenging but rewarding experience. Now that you’re a master Mercenary, dash and slice your way through Risk of Rain 2!

Debbie Grayson Is The True Hero Of Invincible