Last week, I was able to play through the first four hours of Saints Row and found it to be a great time that feels like it strikes the perfect balance between Saints Row 2 and The Third. Although my preview mostly focused on story elements and the new world, the only things about Saints Row that feel particularly surprising and new, I was impressed with the small gameplay tweaks like combat rolls and special moves that make the series feel a bit more modern.

There was one thing that felt glaringly missing, however: unique weapons. In the four hours I spent with the game, I was only able to use a few weapons, with the most interesting being a rifle with a sick reload animation straight out of a western, but they were all pretty fodder. Pistol, shotgun, rifle, electric baton – none of them particularly stood out, which is a shame considering the series’ reputation for cool guns. Sure, I was only a few hours in, but Saints Row The Third chucked you an airstrike in the first hour, so I’m a little bit concerned. 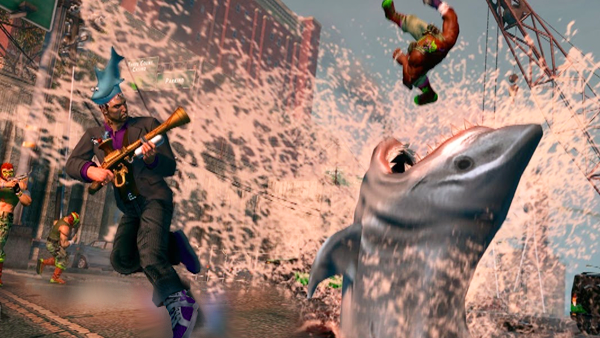 As shown in recent trailers, Saints Row is aiming to up the ante on customisation, especially with its weapons and vehicles. You can turn dual pistols into foam fingers, rocket launchers into guitar cases, and baseball bats into pinata sticks, which is great for making your Saints Row experience feel like your own, but is a far cry from the distinct weaponry of previous games.

Customisable weaponry is great but it shouldn’t be a substitute for unique guns with special effects. The foam finger gun is cool, but it’s still just a pistol dressed up to be a bit more distinct, unlike the Shark-O-Matic, a gun that summons a fucking shark up from the ground. There’s no competition there.

I consider myself a pretty big Saints Row fan who thought that the direction that Saints Row 4 went in was funny, but not where I wanted to see the series continue to go. That game’s arsenal of weapons, however, was perfect. Even in a game all about superpowers, Volition gave us legendary weapons like the Inflato Ray, the Abduction gun, and the Black Hole Launcher.

Particular mention has to go to the Dubstep Gun, a concept so incredibly stupid and dated that I couldn't love it anymore if I tried. After leaving my preview of Saints Row, I couldn't help remembering how much of an impact the Dubstep Gun left on me when I found it in Saints Row 4, and then comparing it to my brief time with the reboot and having nothing even close to that. Saints Row might be trying to distance itself from how over-the-top Saints Row 4 was but even Saints Row The Third, the game that this reboot seems to be emulating the most, had its fair share of iconic tools to use. The Mollusk Launcher and the RC Possessor stand out as two of the most unique, but you’ve also got farts in jars and the mighty Penetrator. Okay, that one’s basically just a baseball bat, but at least it had the balls (literally) to exist outside of a customisation menu.

You can’t argue that this Saints Row is trying to be more realistic than Saints Row 2 and The Third either. It’s generally more grounded in its tone, but there are also special moves that let you toss people like ragdolls, light your fist on fire out of thin air, and go all Matrix and perform a ballet bullet dance. It’s clearly not that tied to realism.

Saints Row seems to be doing pretty much everything right so far, and I’m excited to see all of the unique weapon variations, I just hope it’s hiding a few guns that let Volition go a little bit wilder than guns that just look different.

Games Inbox: What will be at the PlayStation showcase?