Let’s be honest, defeating all the bosses in Terraria only takes up a quarter of your time in the game. The rest is a combination of mining and building your base. The Terraria community never sleeps when it comes to building extravagant houses and artwork in the game. If you’ve seen these posts and wanted to try your hand at it, there are a few tips to remember when you get started.

Though building realistic pieces, or building a decent house at all, takes some sort of design and creativity, it’s not that difficult once you get the hang of it. A pretty house keeps you happy and keeps your NPCs happy. It’s about knowing all of your blocks and being creative. First thing first, you need to create a vision of what you want. 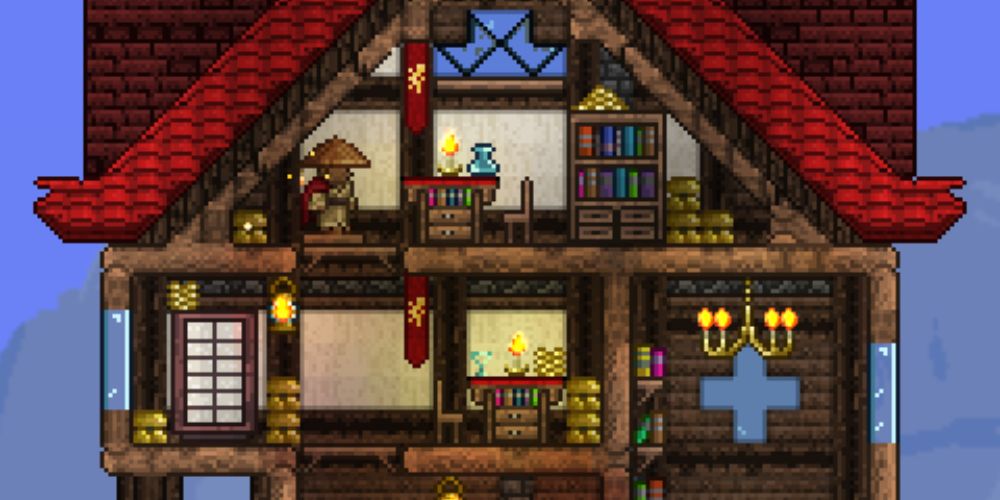 The second thing you need to do after deciding on an idea is to create the exterior skeleton of your house. When choosing what to even start building with, you need to look at all of your options side by side. Take out all your blocks and build squares side by side to see which one you like better. Remember that a house does not have to be made out of wood specifically. You can use different blocks to create an illusion. You can also buy paint from the painter NPC to color over blocks and make them have a different look.

The above photo was posted by Reddit user u/Careless_Vertox, where they used living wood for the exterior and multiple different kinds of blocks for the back wall. They’ve added grey brick wall as trimming, fake beams using living wood, regular wood, and sand. 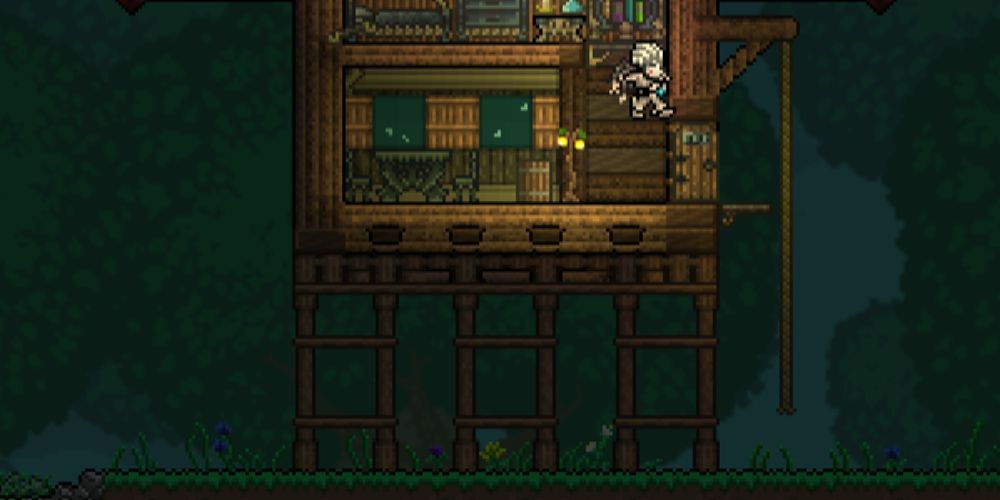 Most players who aim to spend many hours on their house utilize beams. These are wall placements you add to the background and can be made out of any regular building block. They look different than other wall blocks and go vertically, which can be seen in the photo above by Reddit user u/MultipleEggs. Here, the builder also added regular wooden platforms to further the illusion.

Though beams are placed in the background, they act as a physical object that can obstruct furniture and doors. You craft them using the wood or block of your choosing at a sawmill. People also replicate this aesthetic by instead using a different type of block in the background to contrast the rest of the wall. For example, your entire back wall is regular wood but you can use boreal wall to create trimmings or fake beams.

Always remember the painter NPC is available. NPCs sell interesting items, many to decorate with, but the painter sells paint cans of all colors, a paintbrush, and a paint roller.

With these tools, you can change the color of any block. If you like the look of ice bricks but hate the color, buy some paint and color it over. If you’re ever wondering what type of block a user has used and can’t put your finger on it, it’s probably because they’ve painted it to fit their needs.

Another note is to use a hammer. Craft a hammer from regular wood and tap on some blocks and walls some time. This will give blocks different angles and shapes, which is specifically good for creating roofs since they need more angles to be realistic.

2 Use Unorthodox Items For Decoration 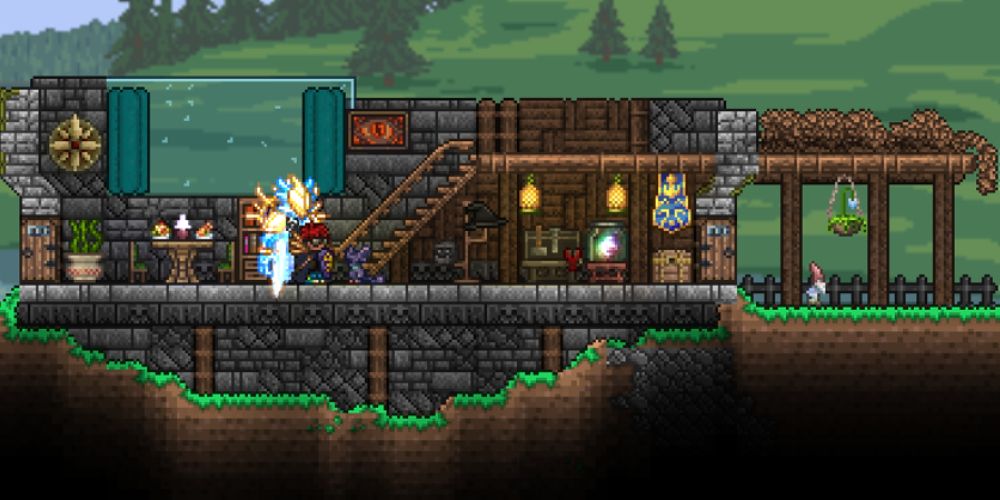 In the first photo in this article you can see the user placed down gold brick blocks in their house. These act as a visual for piles of gold. Don’t be afraid to throw things on the ground and see what works. You never know what block can actually pass as something else.

In the photo above, Reddit user u/DuckLogic1 placed pumpkin block walls on their glass window. The catch? They painted them cyan to act as curtains.

1 The Real World Is Messy 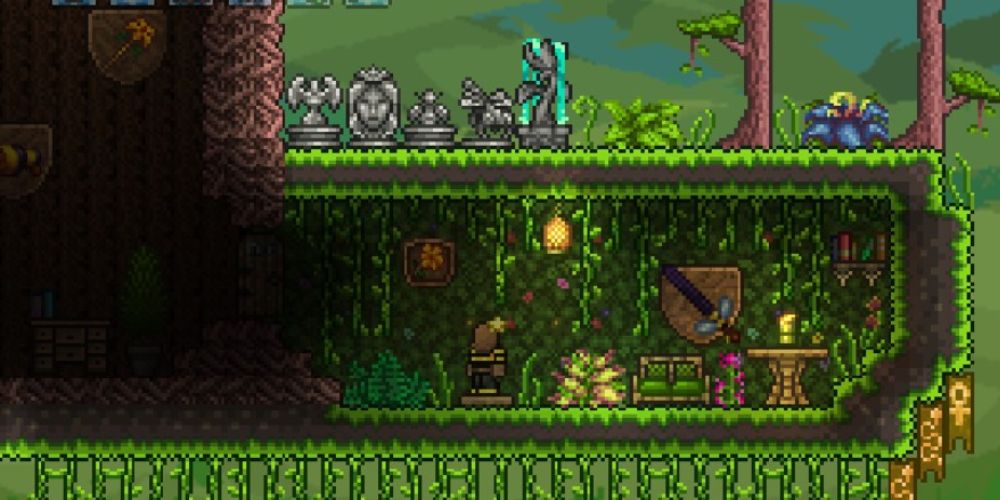 Last tip: don’t be afraid to get messy. The more cluttered a room seems, the more lived-in it feels — so long as the cluttering makes sense, of course. If you’re going for a regular house, stock up on loads of books from dungeons, craft barrels, and place lots of clay bowls and glass vases. Hang up your clothing! Make it look like home.

If you’re going for a natural, wild theme like the image above, be sure to allow grass to grow. Let plants run wild. This makes everything look more natural. To allow grass to flourish, you just need to place down a dirt or mud block and plant the corresponding seed for the biome you want. You don’t have to buy a seed per block because it spreads overtime. Seeds can be purchased from the dryad NPC. The dryad NPC can only spawn after one of the pre-hardmode bosses has been defeated.

Next: The Best Terraria Mods You Can Get (And How To Install Them) 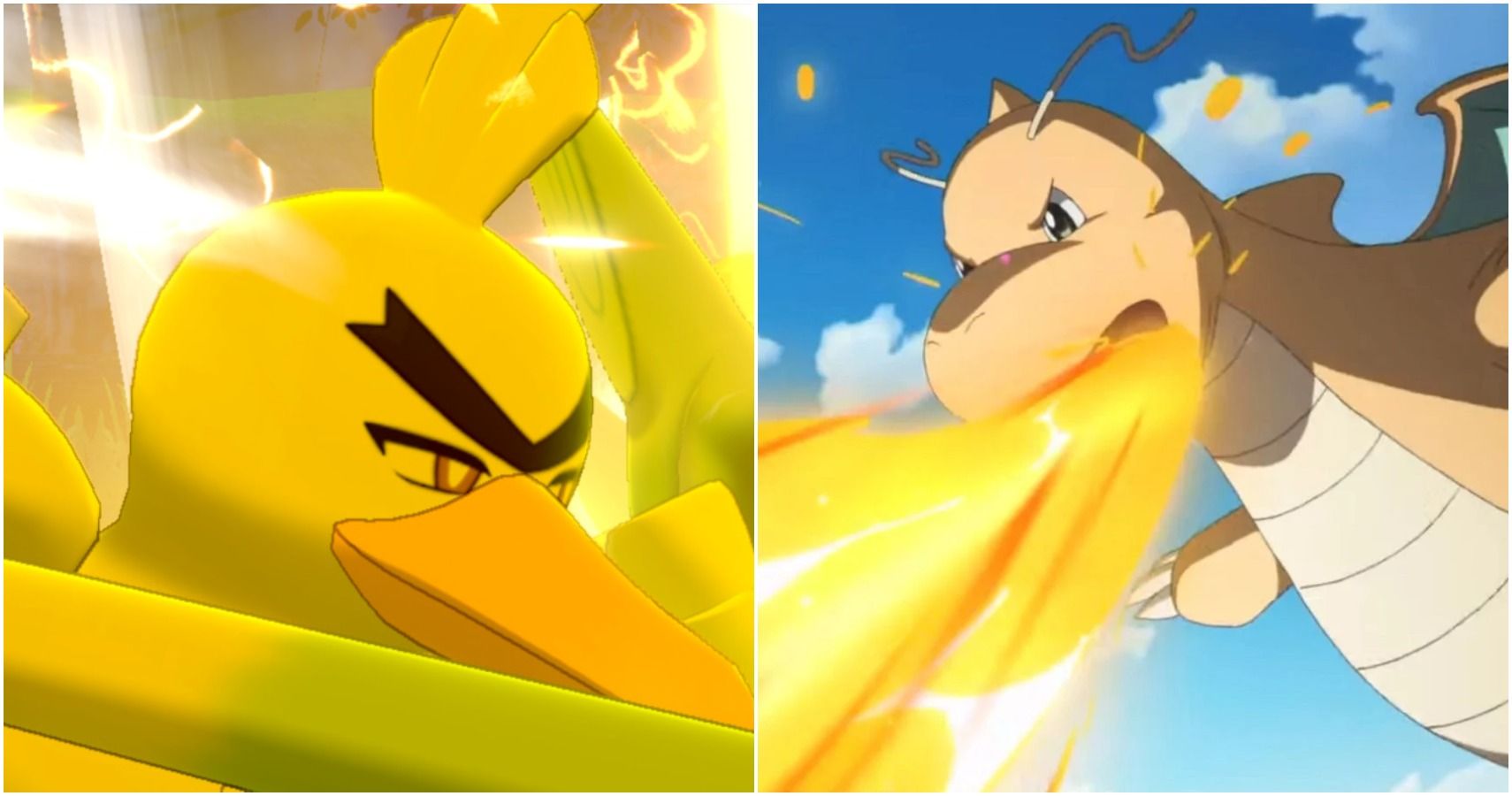 Sharnelle is a small town Canadian writer and gamer with an interest in all things fashion and fantasy. She dabbles in writings from articles to screenplays and spends most of her time drinking tea and playing video games.

eNASCAR Pro Invitational returns for another season in March