Mihoyo is bringing Genshin Impact’s 1.4 update to players on March 17, and tons of new changes are coming to Teyvat. If you weren’t able to tune in or need the highlights, we’ve gone ahead and broken down the highlights and what some of these big updates mean for the Traveler.

To kick things off, Genshin Impact Version 1.4 will hit as Invitation of Windblume, a festival that celebrates the 2,600+ years of Mondstadt’s liberation. With the festival comes new events, rewards, and special character interactions with favorites from Genshin Impact’s Cast.

The main event in Version 1.4 is all about the celebrations in the Windblume Festival. It’s a yearly tradition that the people of Mondstadt have used to send loved ones flowers (or Windblumes) to remind them about their love, and a chance to pay respects to the Anemo Archon Barbatos.

A Windblume isn’t a specific type of flower per se, but Mihoyo did present a list during the live event to establish what the people of Mondstadt count as one. You can collect and send Dandelions, Windwheel Asters, Wolfhooks, Cecilias, and Small Grass Lamps. You’ll get to choose one in the event storyline. This, and more storylines, will be explored in the Festive Anecdotes portion of the festival. 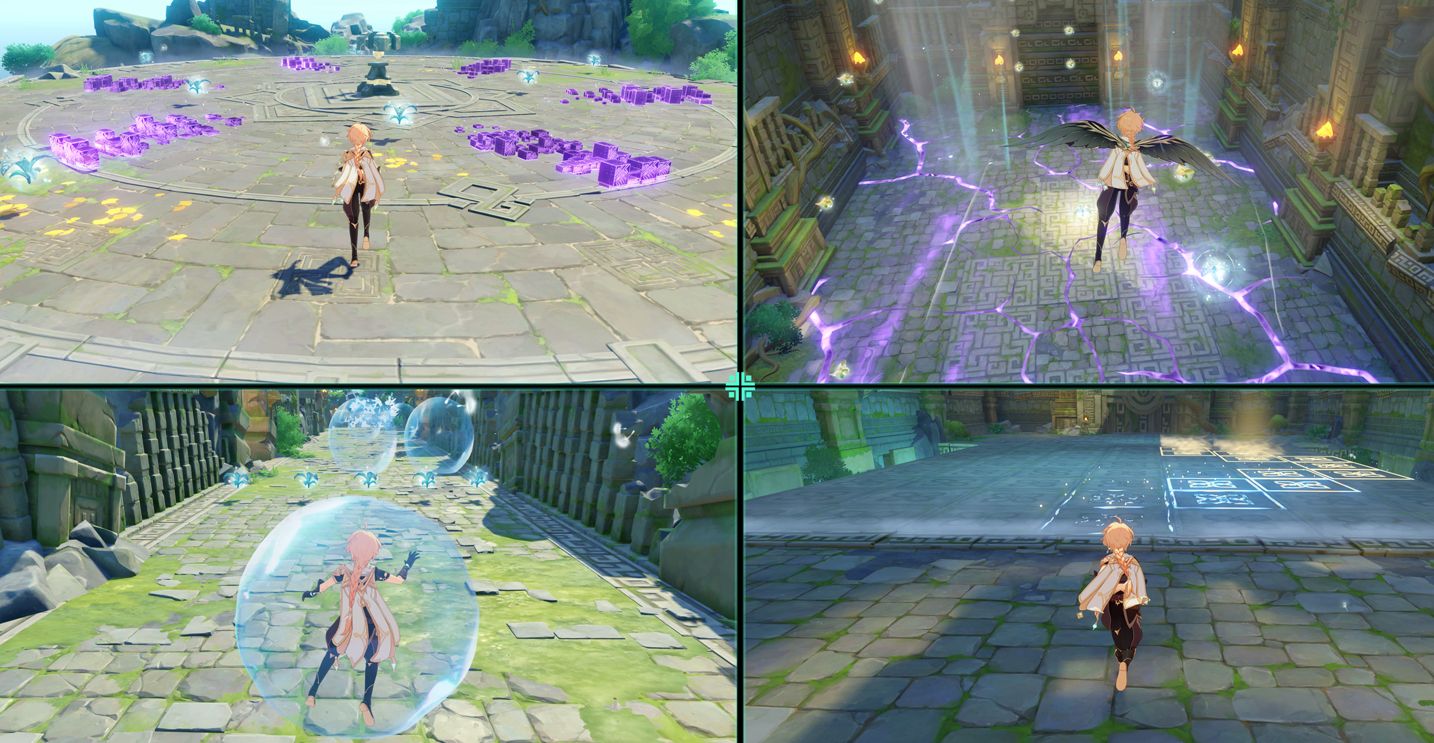 In Festive Challenges, Travelers will get to participate in three new mini-games for the event, including Ballads of Breeze, Bullseye Balloons, and Floral Freefall.  These mini-games will reward you with two permanent gadgets to keep, the Windblume Festival Commemorative Balloon and the Windsong Lyre. You’ll be able to use the balloon for target practice or play the Lyre for some peaceful tunes.

In the Peculiar Wonderland section of the Windblume Festival, you’ll be able to play three small, randomly generated challenges to complete and unlock buffs through. You can take these buffs into fights against powerful bosses and harder domains, giving you the upper hand. Your buff relies upon performing well in these challenges. 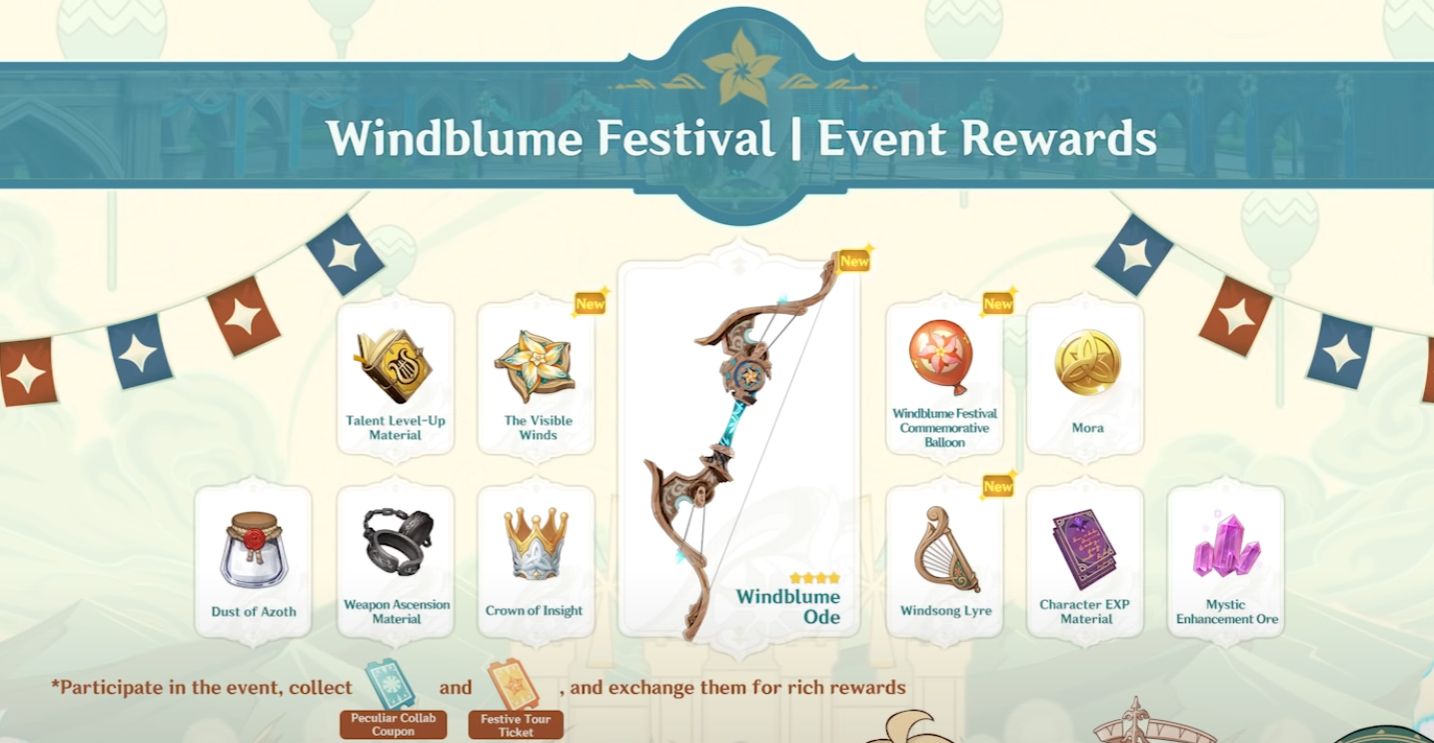 For your efforts in each section of the festival, you’ll gain Peculiar Collab Coupons and Festive Tour Tickets. You can exchange these for in-game goodies like weapons, Mora, and ascension materials. Travelers can also score up to 1,000 Primogems.

Version 1.4 will also welcome a new, permanent feature called Hangout Events. You’ll use story keys to unlock quests where you can take other characters out – they almost look like Fire Emblem Three Houses events. 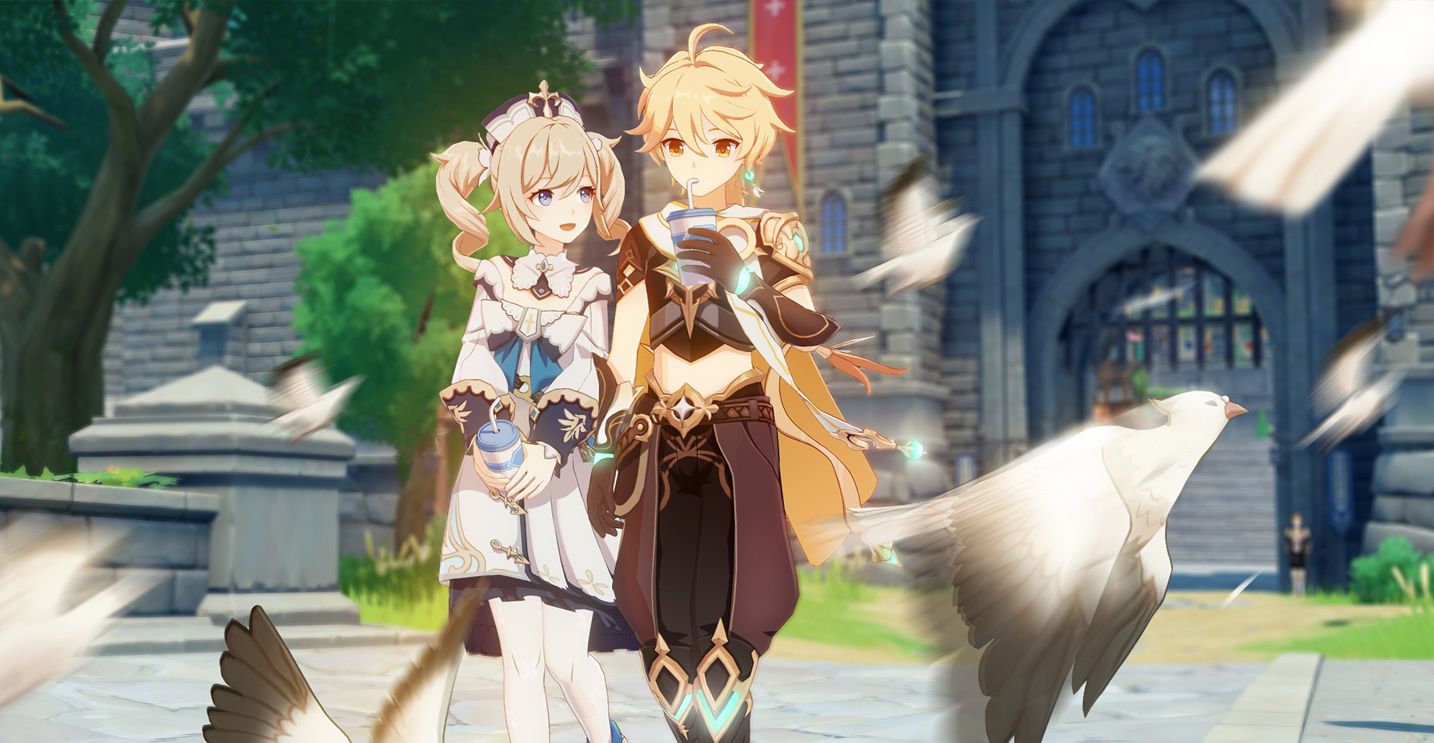 In these new Hangout Events, the Traveler will be presented with different dialogue options for each character. Your choices will determine how events in these sessions play out, and how the quest storyline will end. Things can even go so bad, the Hangout Event can end early. Don’t worry though, you do have the option to try these stories again for different rewards. You’ll also get cute character illustrations for completing these cute dates.

To start things off with the first series, you’ll be able to meet up with Barbara, Noelle, Bennett, and Chongyun.

Genshin Impact will see other events too, outside of the Windblume Festival. In Wishful Drops, a little water creature from the Nation of Water upsets Mondstadt’s wine industry. It’s up to the Traveler to sort things out with the help of a miniature Oceanid. Together, you’ll hunt down other water-based creatures and help the adorable Oceanid absorb those enemies. The tiny boss will eventually join you permanently, making for a cute little pet to follow your party around on their adventures.

Contending Tides also heads to version 1.4, providing you with Primogems, Mora, Talent Books, and other goodies as rewards. You’ll showdown against level after level of monsters in a brand-new arena challenge.  The challenges will change daily and come in three difficulty modes, so Travelers of all skill levels can participate.

We first met Rosaria in Dragonspire, with the 1.3 update that brought Albedo’s banner. As a nun who doesn’t quite fit the description of what you would assume a nun to be, Rosaria is a cold sister who offers no prayer and works alone. She’s voiced by Elizabeth Maxwell in English and Kakuma Ai in Japanese. 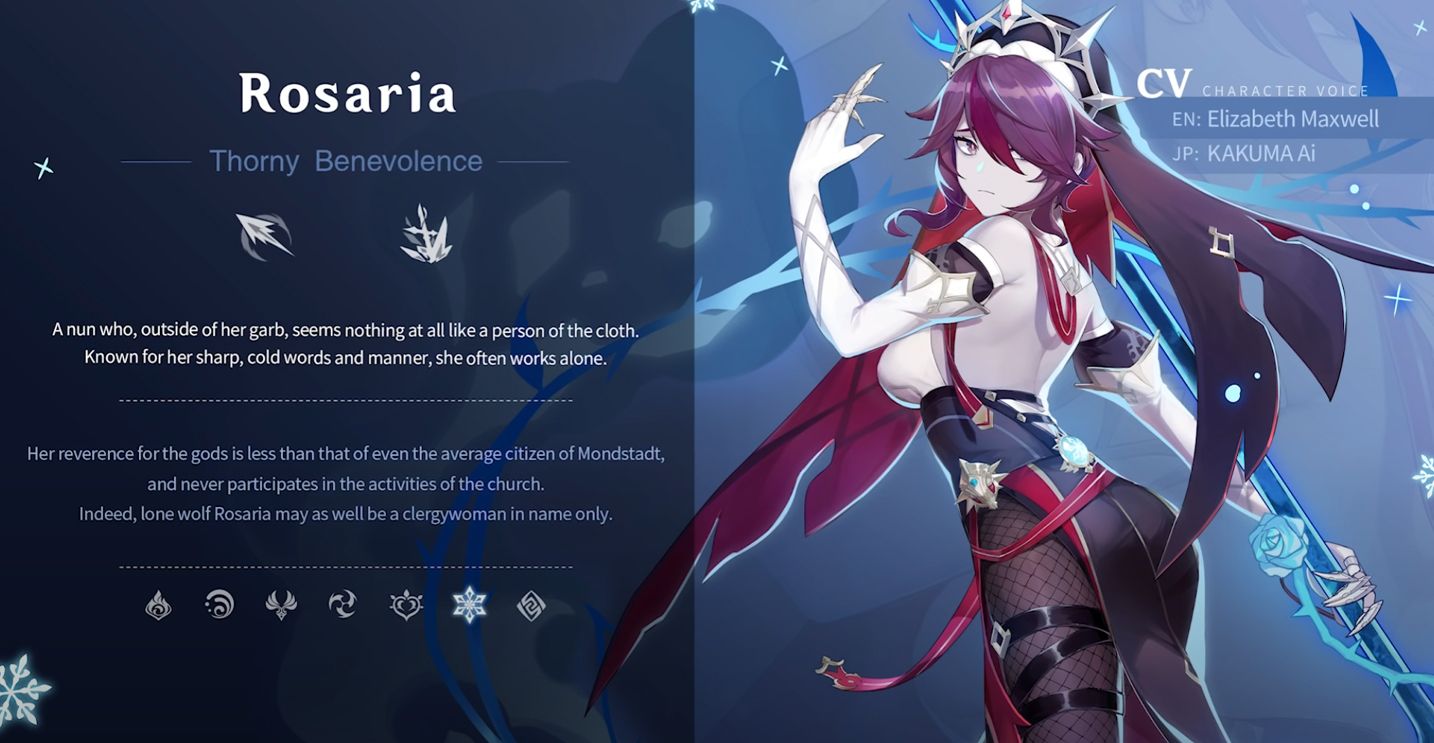 Rosaria is a four-star Cryo character, wielding polearms in combat. Her Elemental Skill, Ravaging Confession, gives her the ability to quickly shift her position and jump behind the enemy. She pierces and slashes with Cryo damage once in place, but as a note, this skill only works on smaller enemies.

Rosaria’s Talents: Regina Probationum, Night Walk, and Shadow Samaritan, all provide new buffs to movement speed, critical hit rate, and other bonuses. Her talents are quite versatile, making her an excellent choice for either support or main DPS roles.

Rosaria will be available in Childe’s (Tartaglia) Banner, Farewell of Snezhnaya, as a four-star rate-up character.

Speaking of Childe’s banner, it’s back in Genshin Impact Version 1.4. Venti, the first five-star banner character, will also see his banner return with Ballad in the Goblets. He’s certainly one to look forward to, as many in the Genshin Impact community regard him as one of the best characters, and plenty of folks missed him since he launched so early. Venti’s banner will include four-star characters you already know, while Childe will see the addition of Rosaria. 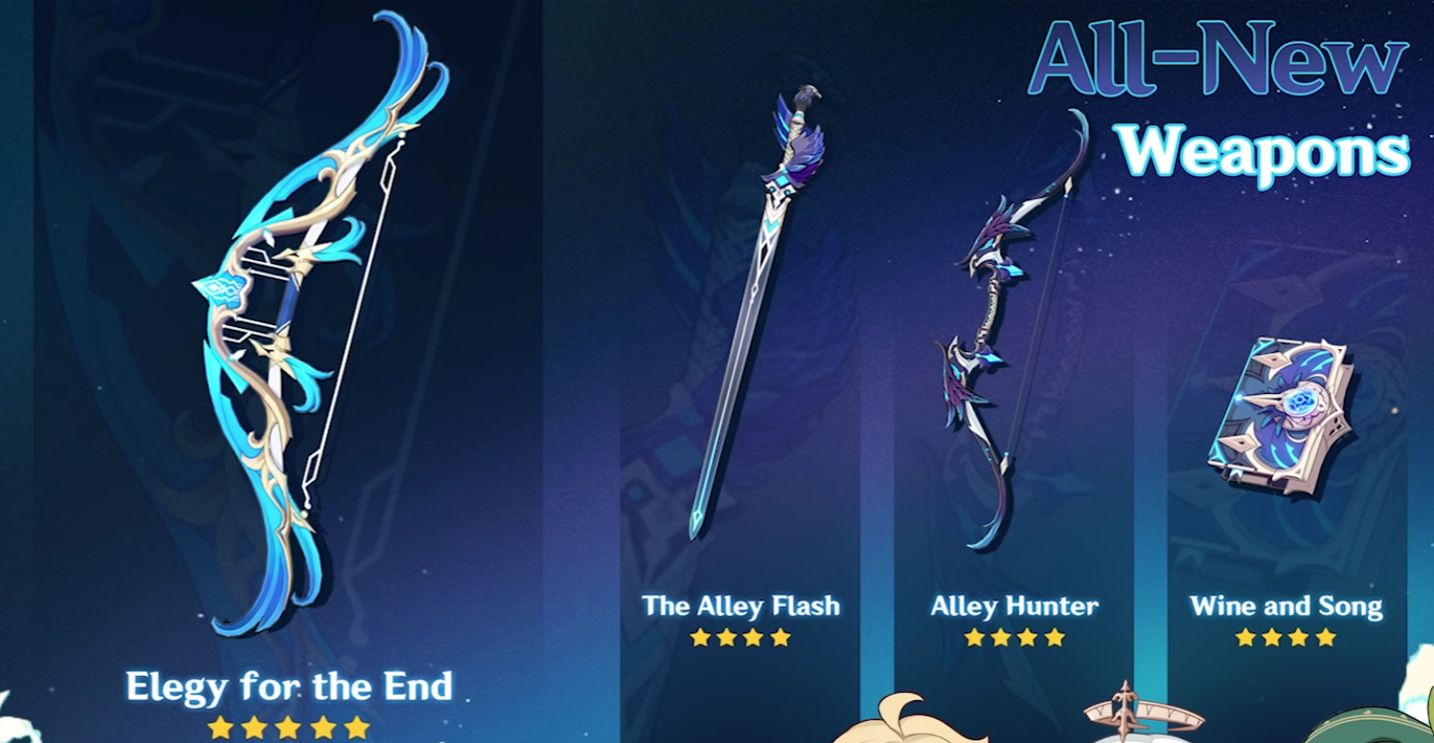 You’ll also see new banners for never-before-seen weapons. Genshin Impact will add a new bow, Elegy for the End, and the Alley four-star series of weapons with The Alley Flash, Alley Hunter, and Wine and Song.

The Abyss Herald is a new enemy you’ll face one time in Genshin Impact’s new story update for Version 1.4. Since he only appears in the new quests, that means there will be no weekly challenge to conquer the Hydro enemy and collect loot from. Mihoyo also hinted that there will be a new plot twist in relation to this mysterious assassin. 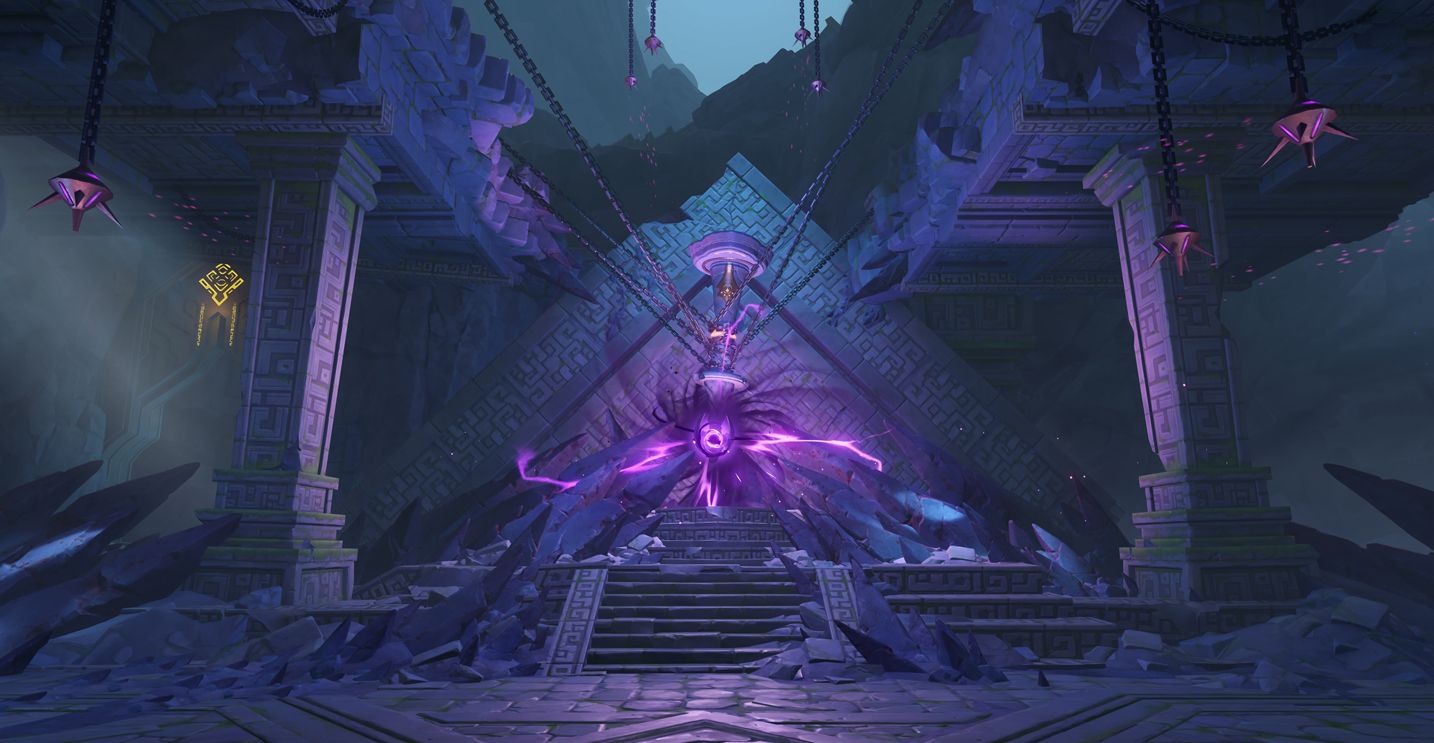 The Dansleif quest line will also continue as the Traveler tries to catch up and investigate the mysterious man. In your search to uncover the mysteries around the Abyss Herald, you’ll discover bizarre set pieces, like a Statue of the Seven that’s hanging upside down. The Mihoyo showcase provided a single peak at the strange phenomenon and promised we’ll find out more about the secrets of the First Ruin Guard and Abyss Herald.

In version 1.4, Mihoyo will up the number of Condensed Resin you’re able to carry from three to five, so now you’ll have a couple of extra chances to bank the precious battle currency for more important Domains and challenges.

The cooking system will also see a slight change, adding the ability to cook manually – even if you’ve already unlocked auto-cook for your desired recipe. You’ll be able to select how to cook more freely, so if you missed the achievement for cooking a suspicious dish because you already cooked everything perfectly, no worries. Mihoyo is remedying the problem and giving you another chance. Quality of life updates also come to cooking, crafting, and forging. Genshin Impact will now remember what characters you used for certain tasks, and set them as the default for those projects when you try to resume them. No more scrolling! 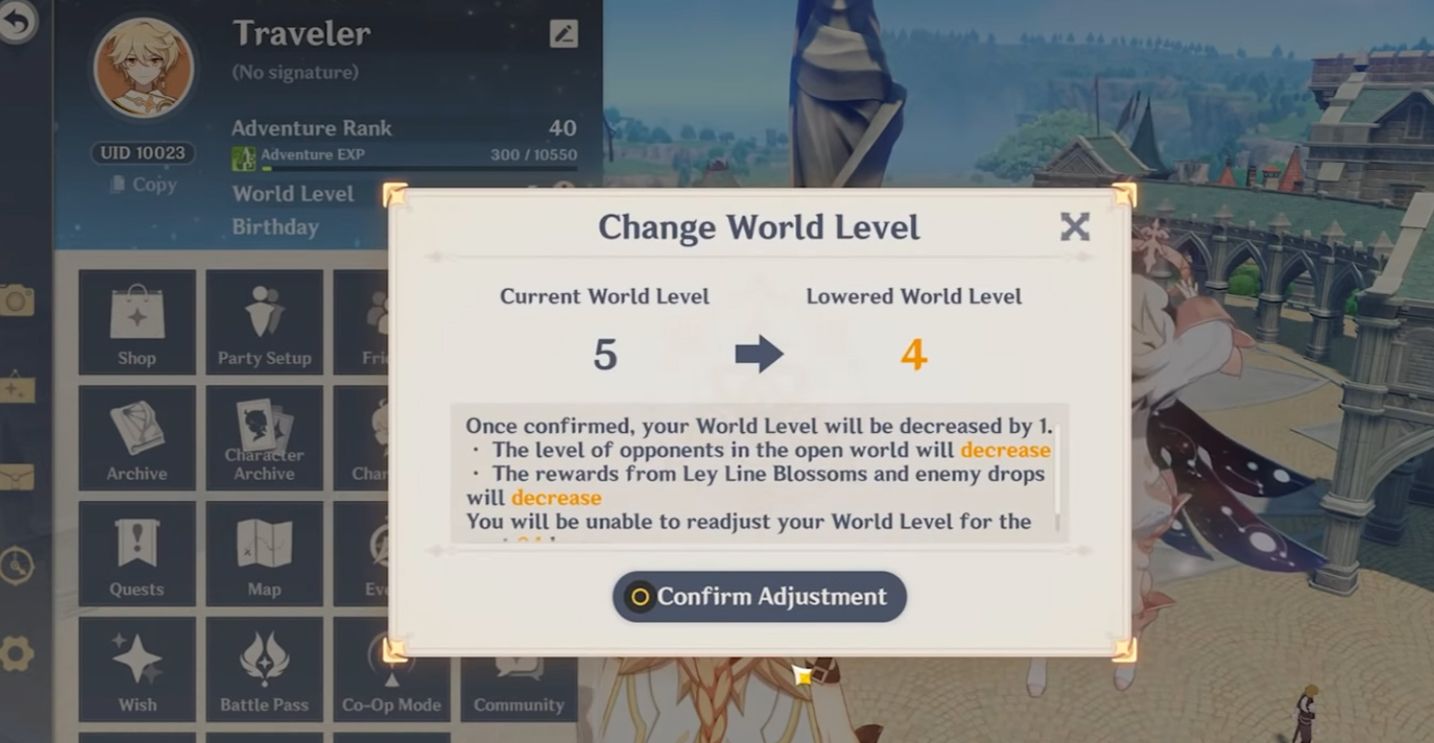 World Levels will also see changes. If you’ve accidentally leveled up your World Level before you were really ready for how difficult the new monsters would be, that’s no longer a huge deal. In 1.4, you’ll be able to decrease your World Level by one rank in co-op or single-player modes. This unlocks at level five, and you can revert back to the more difficult challenge when you’re ready.  The feature is only available every 24 hours.

Profiles will also add a showcase function for Namecards, like the Character Showcase. You can show off everything you’ve acquired so far, and when your friends click those cards they’ll be able to see how they’re collected.

Spiral Abyss will add quality of life changes, too. Travelers will have the option to exit the Spiral Abyss at the character selection screen and gain a new helpful tool to examine team elemental resonance. The option to restart the floor mid-fight also comes in 1.4, so you can restart the second you feel like things are looking bad.

Next: The Fact Everyone In Genshin Impact Hates Hu Tao Only Makes Me Like Her More

The Dark Harvest Has Begun In Dauntless

Rapper Logic Buys Pokemon Card For $220,000, And He Has A Surprisingly Sweet Reason