2K is getting back into the officially licensed football video game business, having struck a “multi-year partnership” with the NFL that covers “multiple future video games,” the parties announced Tuesday.

But don’t call it a comeback: The deal is for “non-simulation football game experiences,” according to a news release from 2K, so it doesn’t give the publisher the ability to revive its dearly departed NFL 2K franchise. Electronic Arts’ Madden NFL series will remain the only simulation football game in town — for now, at least.

The agreement between 2K and the NFL — for which the parties did not disclose financial terms — will produce “multiple video games centered on fun, approachable and social experiences,” said 2K president David Ismailer in a statement. That suggests that the publisher will focus on making games such as arcade-style sports titles in the vein of Saber Interactive’s NBA 2K Playgrounds 2.

Whatever happened to the arcade-style sports video game?

Various games are in “early development,” 2K said, with plans to release them “starting in 2021.” The publisher specified in the news release that the rollout is scheduled to begin sometime during Take-Two Interactive’s 2022 fiscal year, which means that the earliest possible release window is April 2021. (Take-Two is 2K’s parent company.)

Asked about the platforms on which the games are in development, a 2K representative said only that the publisher will “have more to share at a later date.” There’s also no word on the development studios behind the football games. 2K’s in-house team for sports games, Novato, California-based Visual Concepts, makes the NBA 2K series and also took over development of the WWE 2K franchise last year. 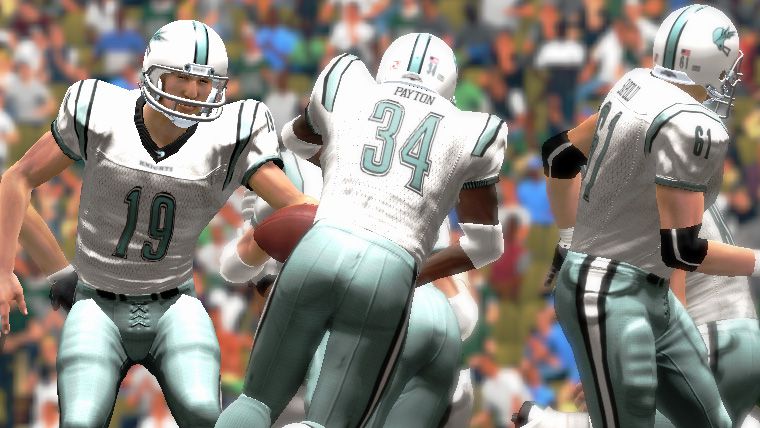 It’s worth noting that 2K’s deal with the NFL only covers the names, logos, and associated elements for the league and its 32 teams — not the names, images, and likenesses of any NFL players. The two sets of rights are typically handled separately, and indeed, an NFL spokesperson told Polygon that 2K would need to sign a licensing agreement with the NFL Players Association in order to use real, current NFL players in its upcoming video games. A representative for 2K said the company could not comment on whether such a deal was in place.

It seems unlikely that 2K would bother making football video games without the rights to current NFL players as well as the real teams. But that’s exactly what it did more than a decade ago, after EA snatched up the exclusive rights to make NFL-licensed titles in late 2004. 2K Sports released All-Pro Football 2K8, its first and only football game after 2004’s beloved ESPN NFL 2K5, in 2007 on PlayStation 3 and Xbox 360. In recent years, 2K has been expanding its footprint in the sports market, inking publishing deals for titles like HB Studios’ The Golf Club 2019 and the aforementioned NBA 2K Playgrounds 2.

It’s a very interesting time for the NFL to sign a licensing deal with another game publisher. The new contract with 2K is only possible because of a change in the terms of the NFL’s arrangement with EA. That deal previously encompassed any kind of league-licensed video game, which is why EA was able to make 2012’s arcade-style title NFL Blitz (after acquiring the brand from the defunct Midway Games). But the NFL spokesperson told Polygon that EA’s current exclusivity contract with the league only covers NFL-licensed simulation football video games on computers, consoles, and mobile devices.

MLB The Show going to other consoles could be 2021’s biggest story, two years early

Moreover, EA’s existing deal is set to expire at the end of the 2021 NFL season (i.e., in early 2022), according to an industry source with direct knowledge of the terms. And while EA would presumably seek to renew its contract again for Madden — a lucrative annual franchise that has been the bedrock of the EA Sports slate for over three decades — the NFL may finally be willing to open things up to some competition after more than 15 years of exclusivity. Especially if, by that point, 2K has demonstrated the same kind of talent for football that it applied in bringing its basketball series to the apex of sports gaming.

“Expanding the NFL’s presence in the world of gaming has become a focus for the League as we look to grow the next generation of our fanbase,” said Joe Ruggiero, senior vice president of consumer products at the NFL, “and reviving our partnership with 2K was a natural step in that effort.”

EA Sports is the exclusive publisher of NFL simulation games, and our partnership with the NFL and NFLPA remains unchanged. Our agreements have always allowed for non-exclusive development of non-simulation games on various platforms. Our commitment to NFL fans, which spans almost 30 years, has never been stronger, and we’re having our biggest year yet. Madden NFL 20 is the most successful game ever in the franchise, and new modes like Superstar KO and our Madden NFL esports broadcasts are growing the fan base. We’ll be building on that momentum with more new and different experiences, on more platforms and with new ways to play, in the years to come.

How Much Does It Cost to Build a Website for a Small Business?

The Last of Us Part II Meets Studio Ghibli – Fanart