Assassin’s Creed: Odyssey sees players take on the role of either Kassandra or Alexios as they go on an odyssey to defeat the Cult of Kosmos and reunite with their long-lost family. Players who try to take down the cult will eventually find themselves on Kythera Island, embroiled in the cult’s plans there.

The questline will begin with the quest “I, Diona” and can be around the center of the island. This guide will help you out in finding the quest as well as what to do once you start the quest.

Kythera Island is located in the southwest portion of the map and has to be traveled to via the Adrestia. Be sure you upgrade it enough to survive any trouble you might encounter from enemy ships, be they bandits or the Spartans and Athenians. Recruit enemies to give you bonuses for the Adrestia’s capabilities.

The level requirement for the island is 42, and while it can be visited before you reach that level, it is not recommended, since this quest requires that you defeat enemies right out of the gate to start it — enemies that will annihilate you if you’re not careful enough. 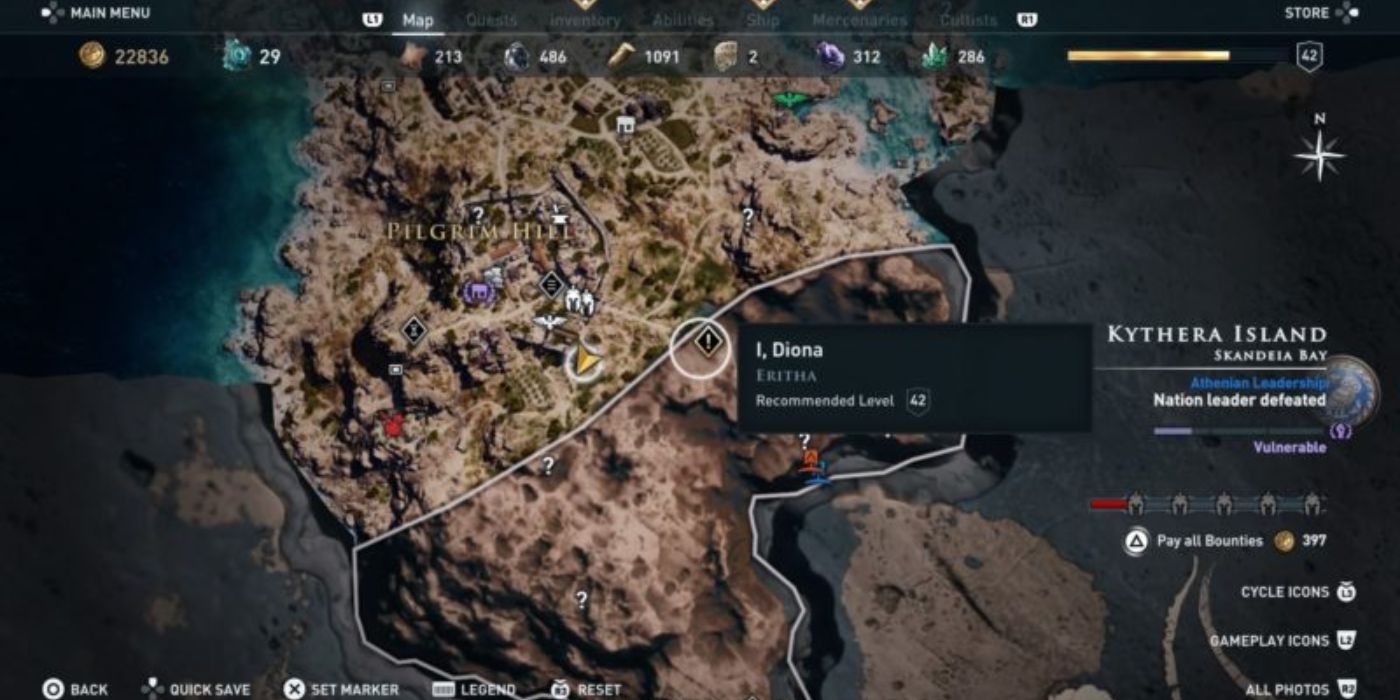 Once you feel you are ready, head to the center of the island to find the marker for the quest. Once you get there, you will see a woman fighting off a group of bandits. She will ask you for help.

This is why you needed to reach the island’s level requirement beforehand. The enemies are basic sword-wielding grunts, so they should not be too much trouble. 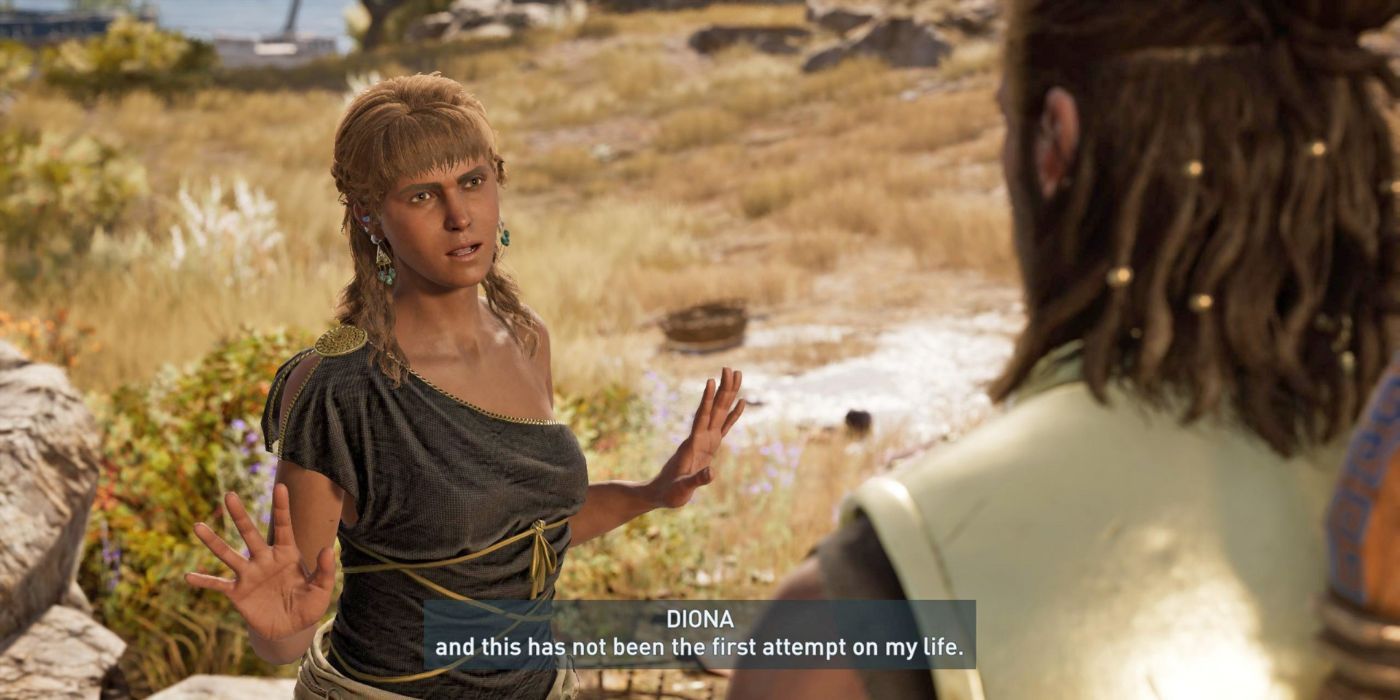 Once the coast is clear, talk to the woman. She introduces herself as Diona, and tells you that she is a priestess of Aphrodite. Diona is definitely the flirtatious sort, as she constantly tries to woo the Eagle Bearer.

During the conversation, she will reveal how the Cult of Kosmos has been stirring up all kinds of trouble on the island and are planning something big. Kassandra/Alexios will ask her to give them what she knows, but Diona will refuse, because the two of you are not safe at the moment. She asks the Eagle Bearer to escort them to the nearby city where the cult will not attack them.

This will initiate the next phase of the quest, which tasks you with escorting Diona to the nearby city. It is not too far from you and can be reached fairly quickly, even on foot.

About halfway through, you will be ambushed by more bandits hired by the Cult of Kosmos. They are the same enemy type as those you fought in the beginning so employ the same tactics as before. Once they are taken care of, continue escorting her until you reach the city’s main square, where a cutscene will play out. 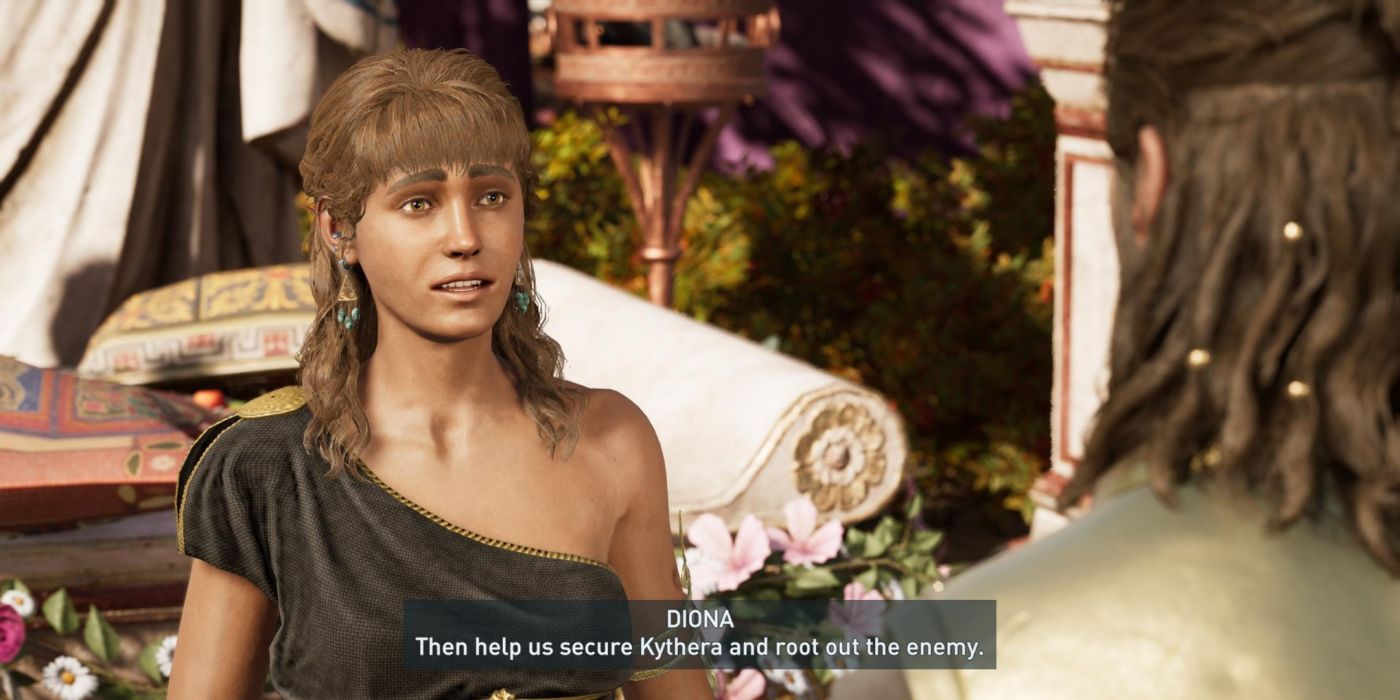 Inside the safety of the city, Diona will explain to the player how the cult is out to kill her sister, the high priestess, which will enable them to take control of the island. She will then give you three different tasks to do to help weaken the cult’s influence which are three separate quests.

Those tasks include the following:

It is also important to note that the player will have the chance to flirt back at Diona, giving you the chance to romance her. Regardless, I, Diona will be completed, which will initiate the next steps to driving the cult off of Kythera Island.

Supercars All Stars Eseries Round 8 schedule

Prepare For Last Of Us Part II With These 10 Movies, Books, And More

The Colonists Review: A Colony Of Adorable Robots? Sign Me Up!