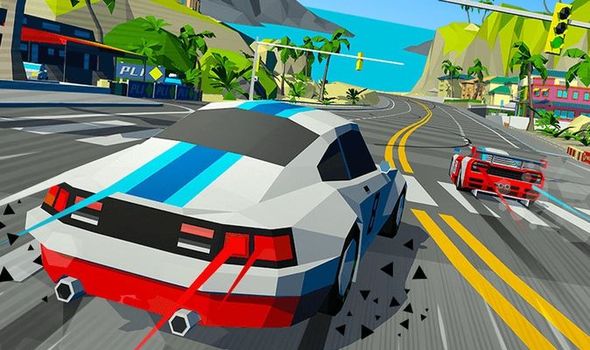 If you grew up playing blisteringly fast arcade racing games that were bursting with colour, then Hotshot Racing is the release for you.

An homage to genre heavyweights like Virtua Racing, OutRun and Daytona USA, Hotshot Racing is the newest game by UK developer Sumo Digital.

This is kind of an important fact, because Sumo Digital made its name by developing what is arguably the best arcade racer ever in OutRun 2.

There are even some traces of OutRun 2 within Hotshot Racing. Gaining speed by drafting behind opponents is crucial for overtaking, and drifting around corners is an essential part of maintaining your top speed.

Utilise these techniques successfully and you’ll gain boost, which can be the difference between first and second place in the game’s extremely competitive races.

With its wheels firmly planted in the arcade racing genre, Hotshot Racing is simple enough to pick up and play, but the aggressive AI and the emphasis on drifting, drafting and boosting means there’s rarely any daylight between you and the other drivers.

Indeed, drafting gives you such a boost in speed that it could be seen as a disadvantage to be out in front with no cars to tail.

As long as you’ve got a nitrous boost in your back pocket – and don’t get shunted into the boards by the maniac drivers – it’s usually possible to make a late move and score a last minute victory. It’s all very exciting!

The action takes place across 16 race tracks in four distinct locations, including a desert setting based on Las Vegas, as well as courses on the coast, in the mountains and deep within the jungle.

Colourfully decorated with everything from Ferris wheels to aquariums, dinosaur bones to temples, the extravagant courses have an excess of visual distractions – not that you’ll have time to take it all in.

The courses take me back to games like Daytona USA 2 and Scud Race, although I would argue that the aforementioned SEGA classics are better looking, even to this day.

This is partly due to the fact that Hotshot Racing sports a very distinct visual style, opting for the kind of polygonal look found in Virtua Racing and more recently, Horizon Chase Turbo.

It’s undoubtedly a good looking game – and I love all of the track details – but the art style just doesn’t quite do it for me. In truth, I never really liked the look of Virtua Racing, despite appreciating it on a technical level. If you’re unsure how you feel, then check out the trailer below for a closer look at the game in action.

I was also slightly disappointed by the soundtrack, which lacks any real standout tracks. It’s not a terrible OST by any stretch of the imagination, but Magical Sound Shower and Outride a Crisis remain the songs to beat!

Of course, the most important thing of all is that Hotshot Racing is extremely fun to play, and the fact that it runs at 60 frames-per-second means it performs exceptionally well.

A selection of cartoonish characters from across the world add a little extra personality to the game, and I enjoyed playing through the Grand Prix mode to see their cutscenes.

Elsewhere, mirrored track layouts are available for when you’ve really mastered the courses, while unlockable vehicle cosmetics means you always have something to aim for.

Outside of Grand Prix, Time Trial and single races, Hotshot Racing also contains a Cops and Robbers and Drive or Explode mode.

Cops and Robbers is all about banking cash from checkpoint to checkpoint, while avoiding being taken out by police cars. Take enough damage and you’ll eventually become a cop, where the aim is to destroy any remaining opponents and nab their money.

Drive or Explode, on the other hand, is clearly inspired by 90s action movie Speed. If your car drops below a certain speed you’ll start taking damage and eventually explode. With the minimum speed gradually increasing throughout the race, games of Drive or Explode become incredibly tense and extremely challenging when only a few cars remain.

While regular racing will always be my preferred way to enjoy Hotshot Racing, these additional game modes offer something genuinely different from the norm, and are more than just passing distractions.

With a budget price tag, the promise of free DLC, thrilling racing, and even four-player split-screen multiplayer, Hotshot Racing successfully invokes the spirit of the arcade, and I’m looking forward to seeing more from the franchise.

Hotshot Racing is out now on PS4, Xbox One, PC and Nintendo Switch. It’s also part of Xbox Game Pass.