The new Doom games have proven themselves to be worthy reboots of the original classics. They combine great presentation with smooth gameplay and traditional Doom aesthetics. Blisteringly fast first-person action is entirely reminiscent of the 90s originals, preserving the experience. However, upon revisiting the first Doom title, you’ll be happy to discover that the game is still fun to play — at least, for the most part.

The original released just a year after id Software’s other popular FPS game, Wolfenstein 3D, which had you playing as a Nazi-killing action hero who ultimately faced off against the Nazi leader himself. Doom had largely identical gameplay mechanics, albeit with more blood, more weapons, and more over-the-top action.

Doom really brought the first-person shooter genre into the public consciousness. From GoldenEye 007 for Nintendo 64 to the Call of Duty series, the genre’s roots are steeped in Doom. From the perspective of a marine, you wield a variety of highly lethal firearms that serve one purpose — to rip enemies apart. By nature, its design is a little primitive, especially as compared to its reboot. Battles take place on a horizontal plane, with no need to aim up or down. The level design is a bit archaic in places. And it can be difficult adjusting to the very old-school graphics after playing the glossy new DOOM Eternal. 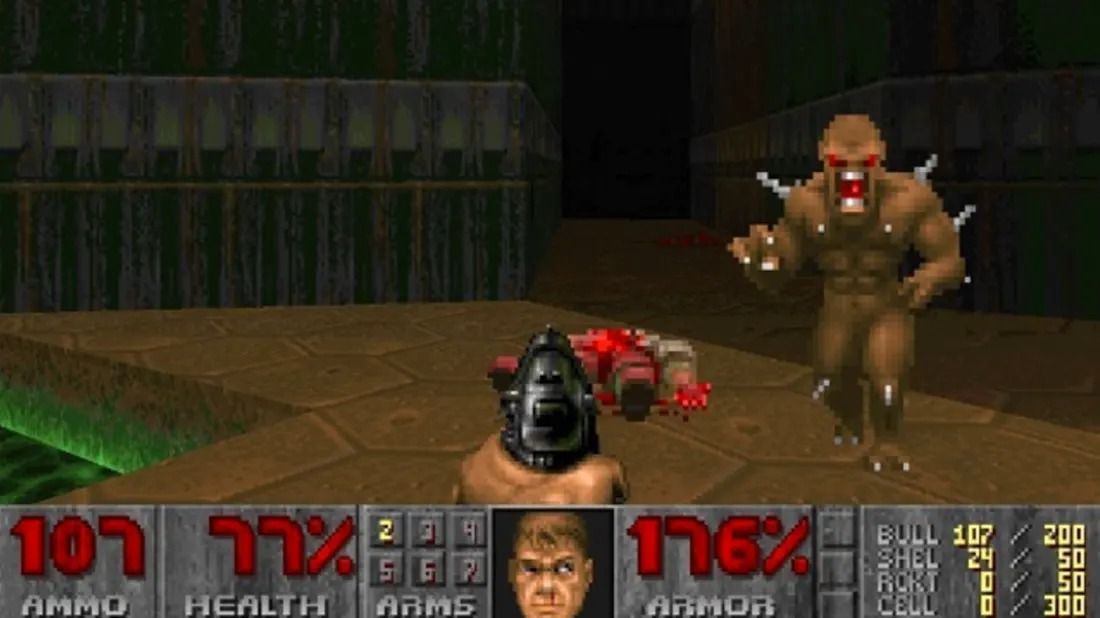 However, 1993’s Doom is somehow still an entirely fun romp. Whether you’re playing the original version on PC, a console from previous generations, or a current-gen console, the game holds up. It is one of the more challenging first-person shooters out there, forcing you to constantly be on the move to dodge incoming projectiles from all directions. Further, hidden passages that contain a barrage of enemies keep the game consistently exciting.

Its 2D graphics are obviously dated, but it’s easy to appreciate how well the game is crafted despite these limitations. The variety of environments are full of life in comparison to other games of the time. Although current game worlds might be far more impressive, Doom raised the bar in terms of building a memorable atmosphere.

1993’s Doom shows its age in some ways, but in other ways it has weathered the years incredibly well. It isn’t the penultimate FPS that casual gamers should choose as their first destination, but in terms of classics, few retro games are as impressive in their execution.

Second Extinction Team Explains Why Their Dinosaurs Are So Deadly

Spatial Opens VR/AR Collaboration Platform to all, From Smartphones to Oculus Quest

Fortnite: Where To Ride A Motorboat Under Different Colored Steel Bridges (Week 2)