PaRappa the Rapper, released worldwide for Playstation in 1997, is one of the most popular and beloved rhythm games of all time – so much so, it spawned a sequel, loads of merchandise and apparently, an anime?!

PaRappa the Rapper (or PaRappa Rappā) aired on Fuji TV in Japan from April 2001 until January 2002 and ran for 30 episodes. Copies of the DVDs are virtually impossible to find online, and the ones that are available sell for about ¥4800 ($43.56) each. To my delight, I found that all 30 episodes were available for my viewing pleasure on a site that shall not be named. I couldn’t resist. I had to watch the first episode. With the game being such a whimsical, rapping joy, the anime had to at least be a fraction as good…right?!

Related: An Ode to UmJammer Lammy, the PaRappa the Rapper Spinoff No One Remembers

The first episode, titled The Initial P, is centered around PaRappa Rappa, the fun-loving anthropomorphic teenaged rapping dog, having to fight a villainous thieving rabbit named Gaster, who has stolen his bike and the profits from a garage sale, run by human Sister Gon. The garage sale is attended to by his crush, Sunny Funny, a caring humanoid daisy, and their friend headstrong cat Katy Kat. Other characters include his apathetic teddy bear best friend PJ Berri and PJ’s new sensible dog friend, Matt Major, as well as pompous vixen Paula Fox, who all help to thwart the bunny burglar and fix a machine that pours jelly beans into the sky.

I didn’t expect the story to be more absurd than the game and yet, here we are. It was unnecessarily complicated and confusing. There were no noticeable plot points from the game, except for PaRappa’s crush on Sunny.

The story was not the only change. The paper thin art style we know and love was traded in for more traditional 2D. The colors are a little more muted than the bold, psychedelic ones featured in the games and the usual harsh outlines are replaced with softer ones. This gives the show an overall cuter look. 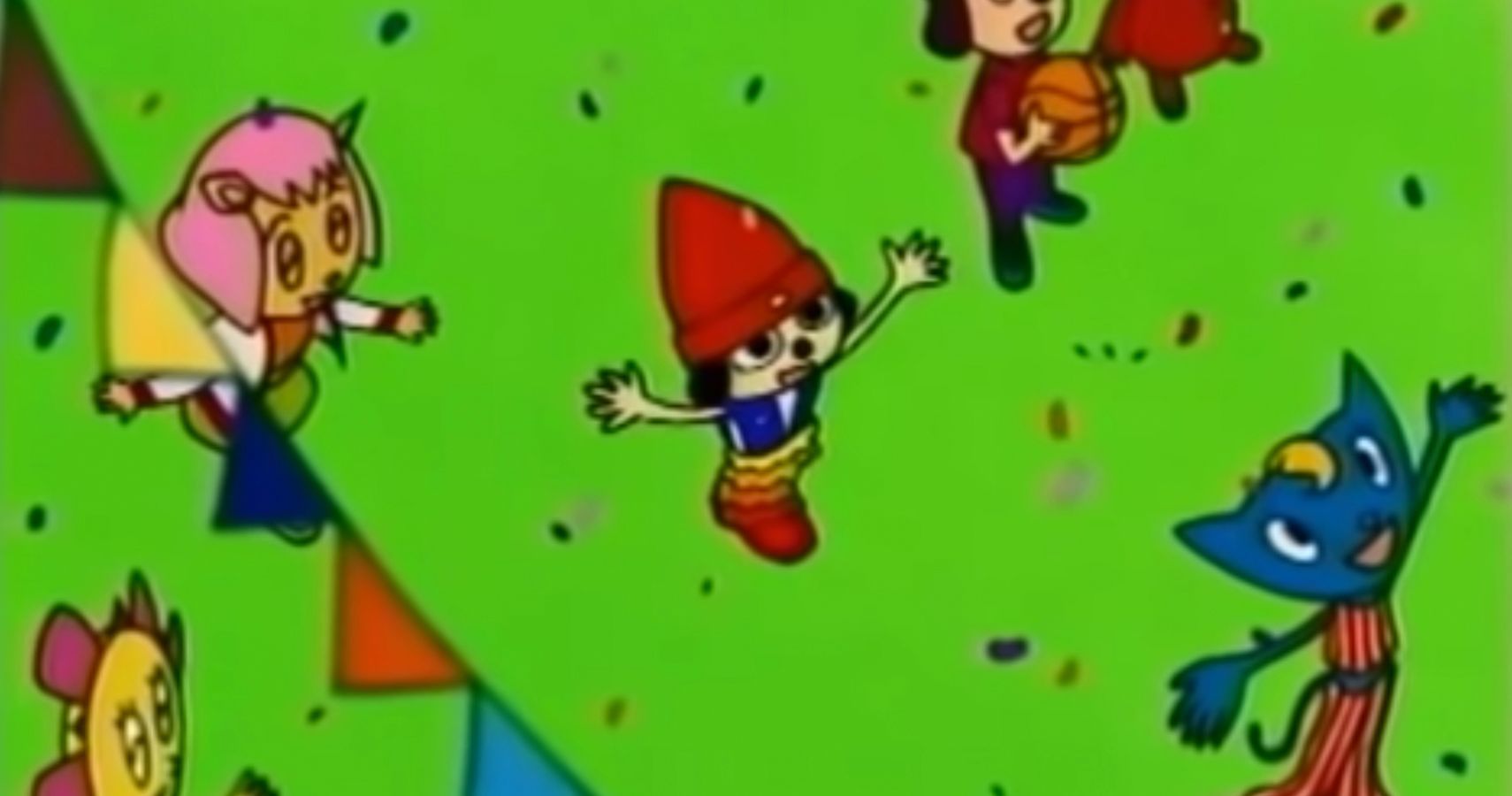 The anime also features a lot of characters not in the game, such as Matt Major and Paula Fox, without showcasing other important ones, such as PaRappa’s rival, Joe Chin, as well as one of the most game’s memorable characters, Chop Chop Master Onion. (Our favorite onion mentor does not appear until the 13th episode.)

Surprisingly, this episode had profanity, even though it was rated TV-Y7. This could be attributed to the fact that the show was originally aimed at teens, but Sony decided that the series should focus more on toy sales and changed the aim to children. This could also explain why the characters were drawn to appear more adorable.

With the PaRappa the Rapper game being famous for its catchy tunes, I was disappointed that music was not at the forefront of the show. Despite his name being “the rapper”, PaRappa did not rap at all. In fact, the only rap music that could be heard in the series is a hip-hop inspired cut scene.

However, the music that was in the show is really good, which included the opening being a groovy 70s inspired upbeat bop called Love Together by Japanese funk band Nona Reeves and the ending theme being a contemporary pop jam entitled School Gir by J-pop girl group Bennie K.

One of the most impressive and shocking aspects of this anime is the star-studded voice acting cast. PaRappa is voiced by Miyu Irino, who is known for voicing Haku in Spirited Away and Sora in the Kingdom Hearts video game series. Masako Nozawa plays Sister Gon, an African-American older woman. Nozawa voices three generations of Super Saiyan as Goku, Gohan and Goten in the Dragon Ball franchise. Other voices include Norio Wakamoto, who voices Cell in the Dragon Ball franchise and Mika Kanai, the voice of Jigglypuff in the Pokémon franchise.

Ultimately, the anime does not live up to the game. The story was bizarre and confusing and doesn’t seem connected to the game’s plot at all. However, I was enamored with the cute characters, amazing voice acting and nostalgia. I would definitely be lying if I said I wasn’t going to go back and finish the series, but if I don’t hear some rapping soon, I may just kick-punch the screen.

Samus Has Outgrown The Morph Ball In Metroid Dread