Welcome to Rust, one of Steam’s most popular survival games! Whether you’re playing this title alone or with a group of friends, its realistic environment can get pretty brutal. Gain an immediate advantage by prioritizing a few tasks.

Everyone begins their Rust experience the same way: washed up naked on a beach, with nothing but a rock, a torch, and (if the server’s creators are feeling generous) some bandages. You’re on the edge of starvation and dehydration. Plus, the map is full of creatures who would love nothing more than to kill a poor, naked sap running through the woods. Stay alive by keeping some things at the top of your list. 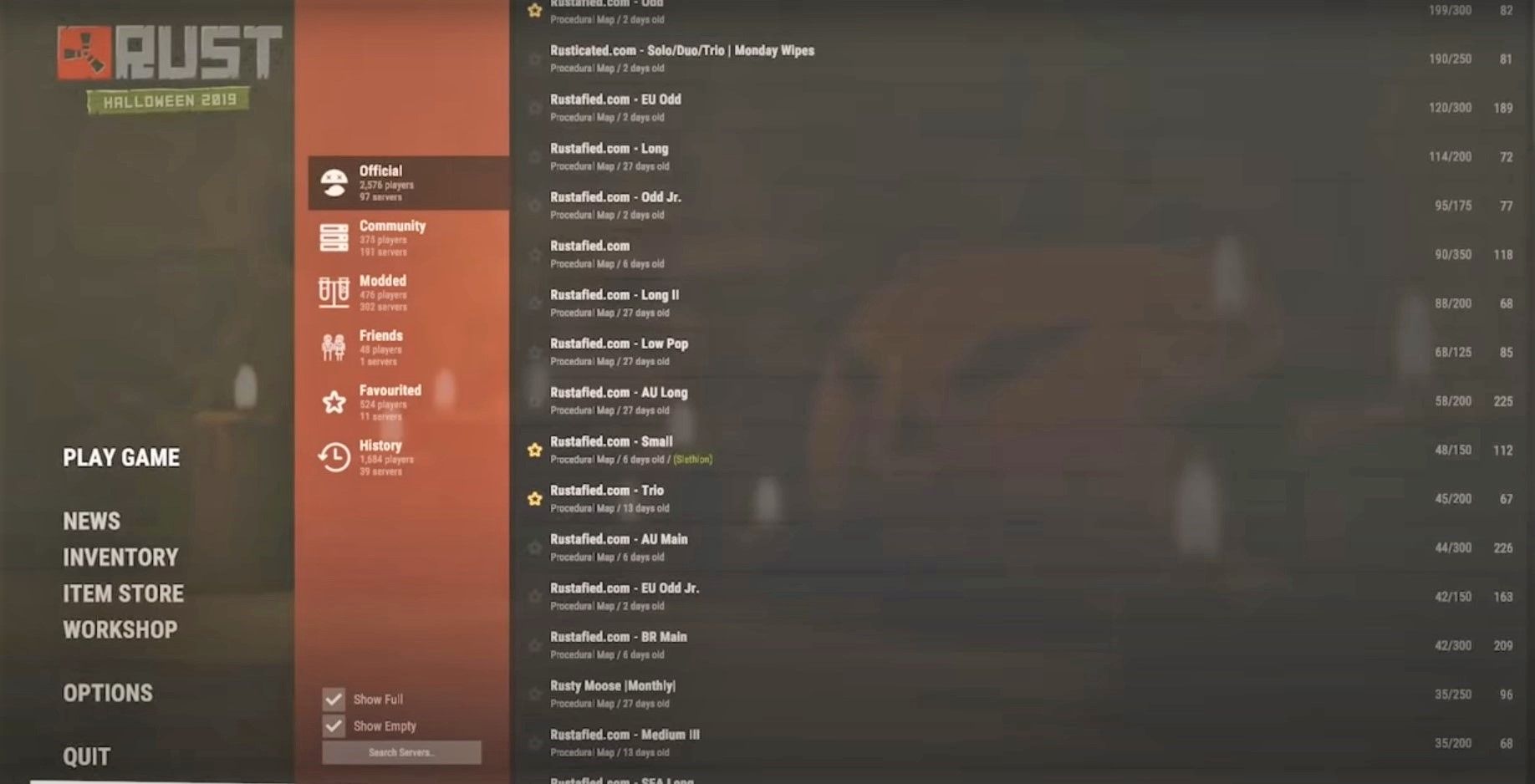 Rust offers a wide variety of servers to choose from, each with its own unique traits and rules. This is when you should decide your preferred playstyle for the game. Do you want to fight other players, raid their bases, and loot their supplies? Or would you rather be left alone as you harvest resources and build your woodland cabin? Pick a server that aligns with how you want to play the game.

There are three types of Rust servers: Official, Community, and Modded. The Official servers tend to have high player populations and run according to the game’s vanilla rules. Community and Modded servers are created by other players and can be very fun. Some of the admins add interesting elements such as rideable horses, quest reward systems, player shops, guarded weapon crates, and zombies. Yes, zombies! Just be wary of hackers and cheaters in these servers.

This game loves to put players at an immediate disadvantage. You start by washing up on a beach, literally ‘Naked and Afraid,’ with no supplies to brave the elements. Your character will have low health and close to dehydration and starvation. Players who don’t find sustenance right away will lose more health and die pretty quickly, forcing them to start over. Looking for food and water should be your first priority.

The best way to locate these items is to open your game map and look for the nearest river or lake. Freshwater areas are filled with corn and pumpkin plants. By eating these, players will regain a surprising chunk of their food, water, and health bars. Pick up as many plants as you can find and save them for later. 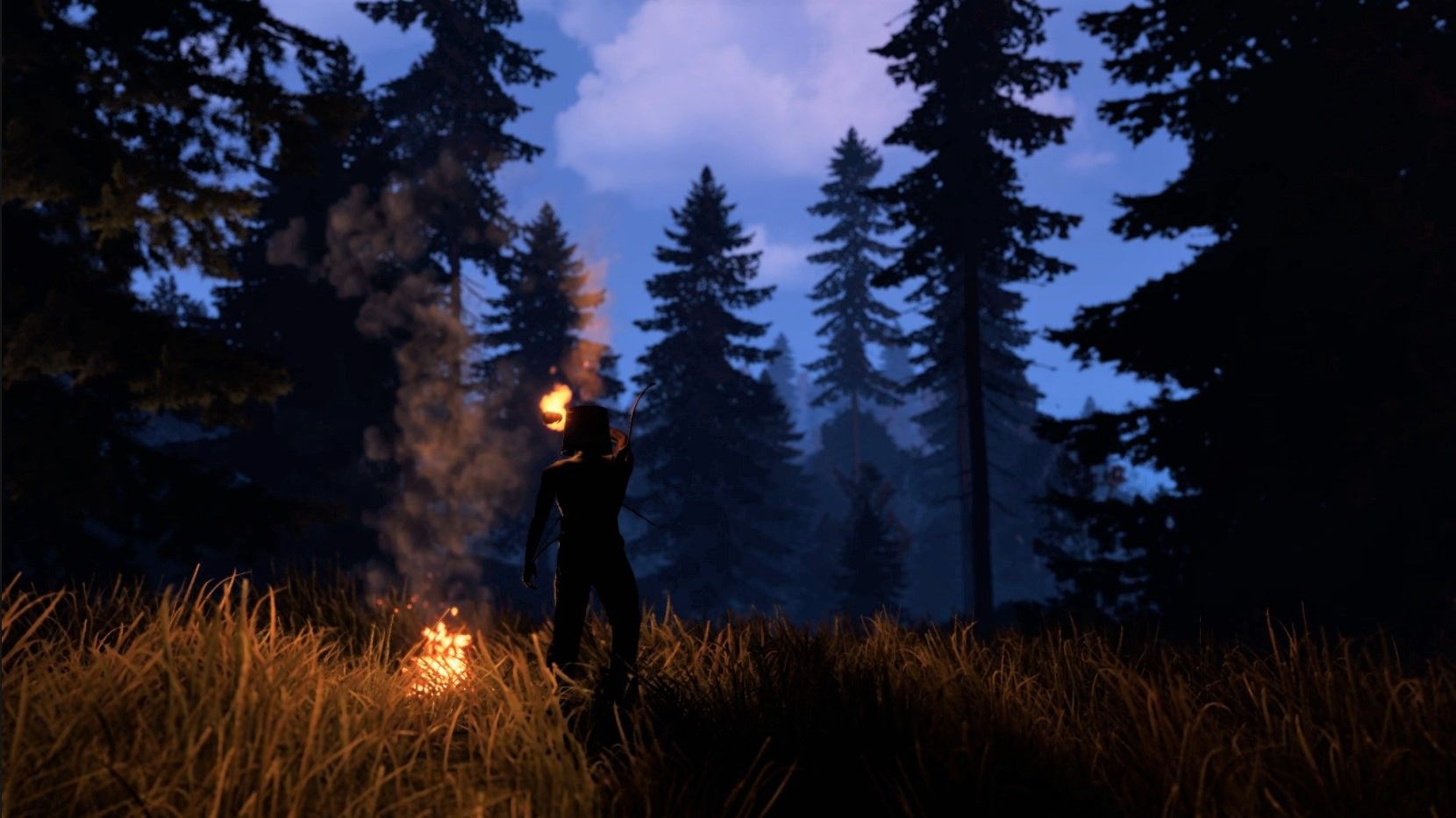 Once players are no longer in danger of starving to death, the next important task is to choose where to build their shelter. You don’t want to put up a cabin just anywhere. If you’re on an active PvP (player versus player) server, building a fort on top of a hill for everyone to see is a bad idea. You also don’t want to make camp near a landmark on PvE (player versus environment)-heavy servers. This is where enemies will constantly spawn, so you don’t want waves of zombies battering against your walls. Players should also consider placing their base near a source of fresh water, food, and wood.

Players can efficiently pick up resources on the way to their chosen campsite. If you look, the ground is covered with helpful resources that you can grab. The quantity depends on your server’s settings. Either way, look down for tree stumps, stones, ore clusters, hemp plants, berries, and mushrooms. Players who do this will arrive at their base location with enough resources to at least craft some tools and the foundation of a shelter. Save yourself some time and farm supplies while on the run!

Your sleeping bag is your spawn point in Rust. So unless you want to wash up on a random beach across the map when you get killed, you should drop one as soon as possible. The only requirement to build sleeping bags is 30 cloth. Luckily, this can be harvested from hemp plants found on the ground in grassy areas, without any tools needed.

The best part about this feature is that players don’t need to build a shelter to create a sleeping bag. As long as it’s not close to a map landmark, a sleeping bag can be placed anywhere on the ground. And most servers don’t limit the amount you can use! Veteran players often drop these respawn points outside every significant spot on the map. They can then choose which location to start from if they die. Pretty sneaky. 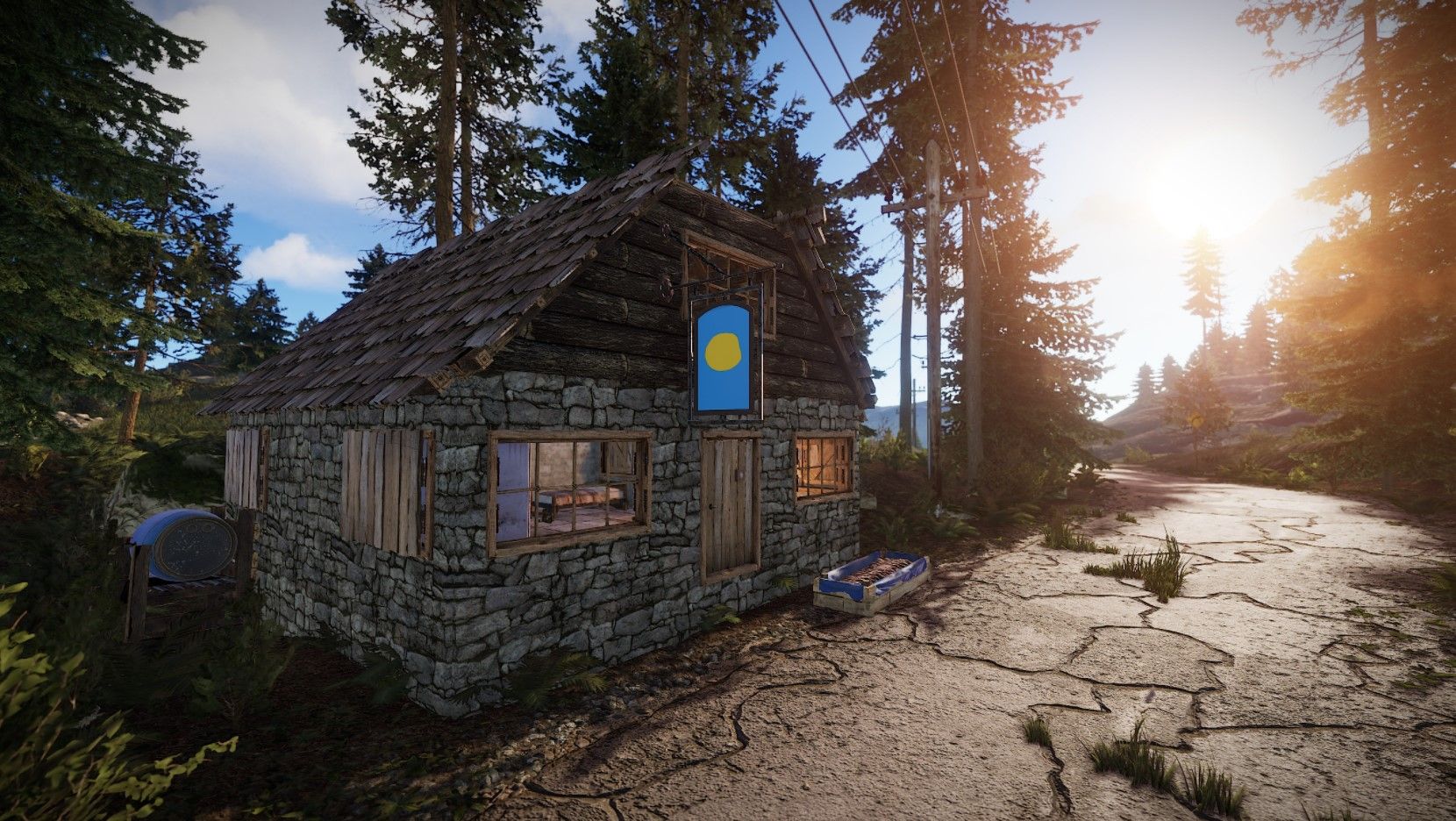 In this realistic survival game, you can’t expect to have unlimited pockets. You’ll need a safe place to store your items, cook food, repair gear, craft tools, and sleep. Players looking to build their first camp should keep a few things in mind. On more active PvP servers, a well-protected base is very important. Start with a small stone shack that will shield you from bullets and explosions; until you get the resources to upgrade to metal walls, this will make it harder for other people to raid your base. Even players on PvE servers should keep their first shelter small. Get the essentials done before you start upgrading to giant walls and watchtowers. 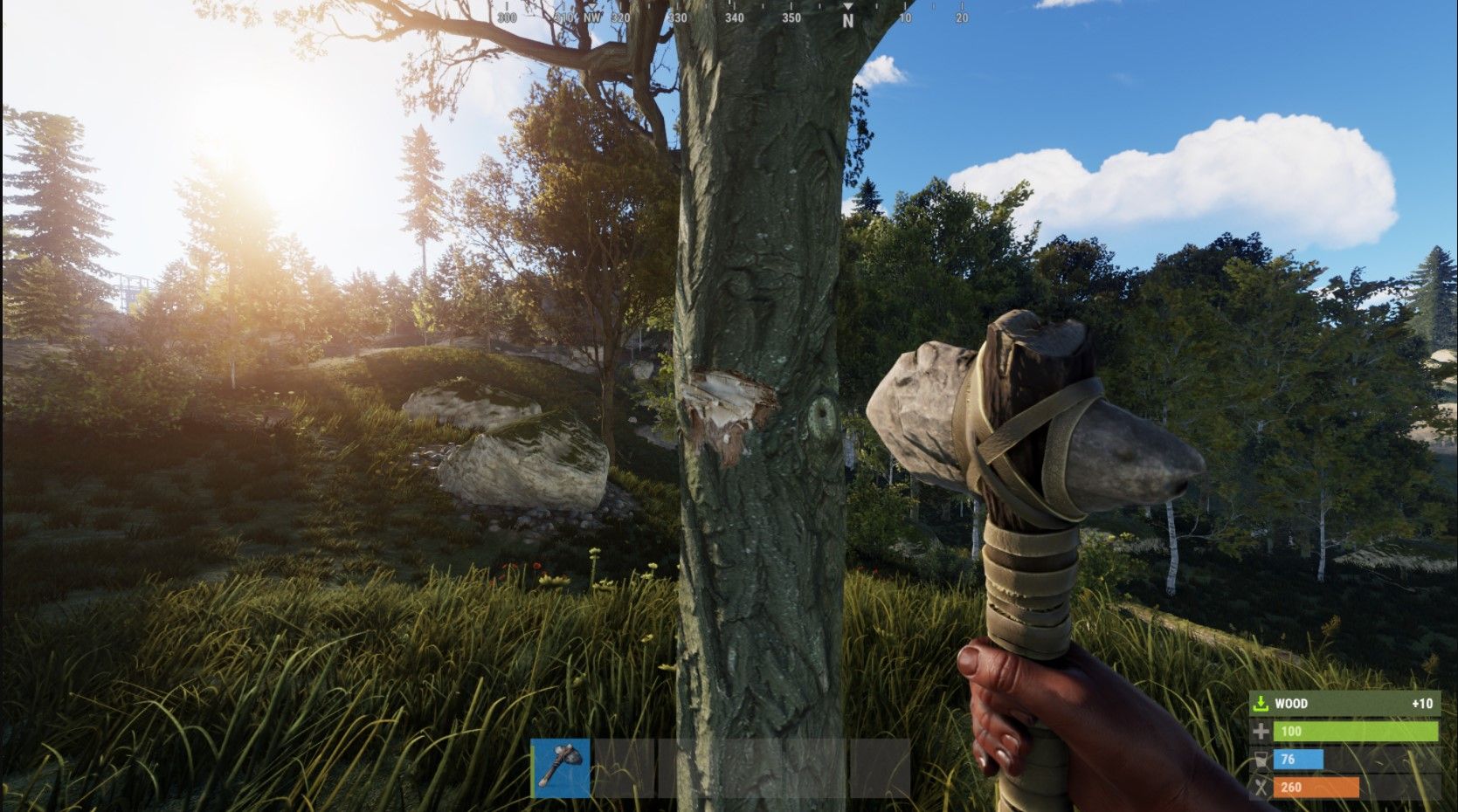 You can’t build anything substantial without tools. Shocking, right? Players always begin their Rust experience with a large rock as their sole tool and weapon. Good luck harvesting ore and chopping down trees with that. As soon as you pick up some wood and stone, you should craft a stone hatchet and a stone pickaxe. These tools don’t require much to make and they’ll majorly increase the number of materials you can farm per resource. And, in this game, resources are everything. They help to protect the integrity of your base, they allow you to craft weapons and clothing, and they can even be exchanged for essential scrap parts. So creating the tools to harvest these materials is a critical requirement for success in Rust.

Now that a new Rust player has his or her feet wet (literally and figuratively), it’s time to build up an arsenal of supplies. You’ll quickly find that your inventory space is limited. Experienced players often build massive storage lockers, shelves, chests, and tool cabinets to safely hold their excess materials. They then go on supply runs to hunt, gather, and bring home any crafting resources that are running low.

When you’re carrying a lot of supplies, be careful. Unfriendly players on PvP-heavy servers would love to take you down and discover that you were carrying a week’s worth of Scrap. This rule also applies to PvE servers. If you’re killed by a rogue animal (or zombie), you lose all of the items that were in your bags. The only way to get everything back is to pick them up from your corpse. Plus, for players that get killed in guarded zones, it’s nearly impossible to reenter them without the weapons that were lost. Save yourself from a lot of frustration and don’t carry any item you’re not willing to lose! 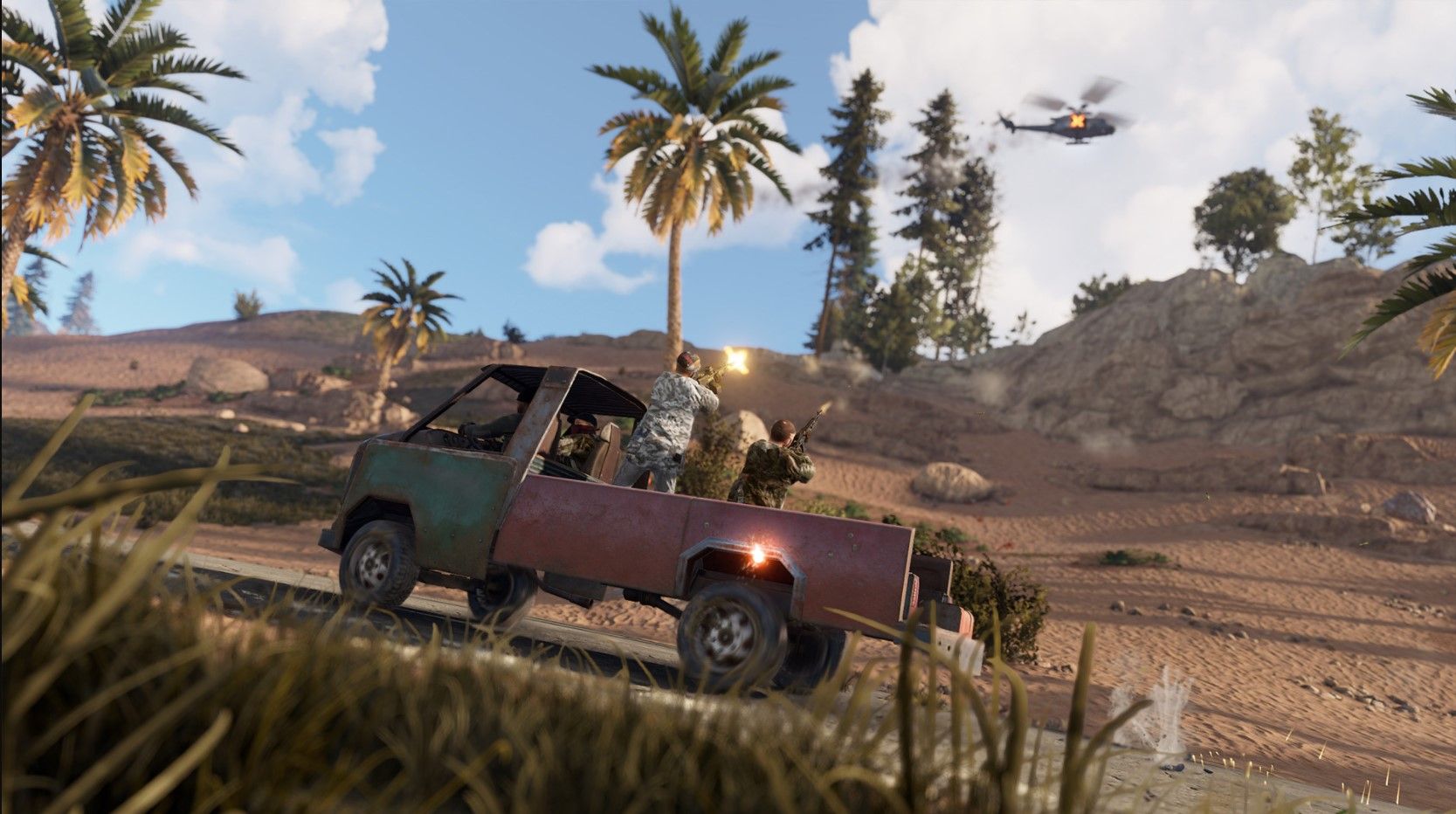 No matter which type of server you’re playing on, it’s vital to have a collection of high-damage weapons. These items are not easy to get right away. However, try to at least craft a Compound Bow or a Pipe Pistol first. You’ll obviously need weapons to defend yourself against enemies. Also, they’ll make hunting much easier; have you ever tried taking down a Stag with just a rock? Not the easiest way to go. And the more animals you can hunt, the more meat you’ll get, and you’ll quickly have a pile of substantial food. This can be the difference between having maximum health going into a fight or arriving near-dead from starvation.

The Research Table is a critical piece of the game. New players of Rust will notice that, after they craft the more basic items, they’ll need a Blueprint to make anything else. You can only get Blueprints by buying them, looting them, or discovering them via the Research Table. This crafting station allows you to learn the recipe for almost any item you happen across. Maybe that Scientist dropped a Semi-Automatic Shotgun. Maybe that Zombie had a Salvaged Sword. Or maybe you found Exploding Shotgun Shells in a chest somewhere. Research them! Players that have a lot of Blueprints unlocked never have to worry about losing high-level items; they can always find the materials and craft them again. It’s worth the Scrap cost.

Next: 10 Best Weapon Skins In Rust 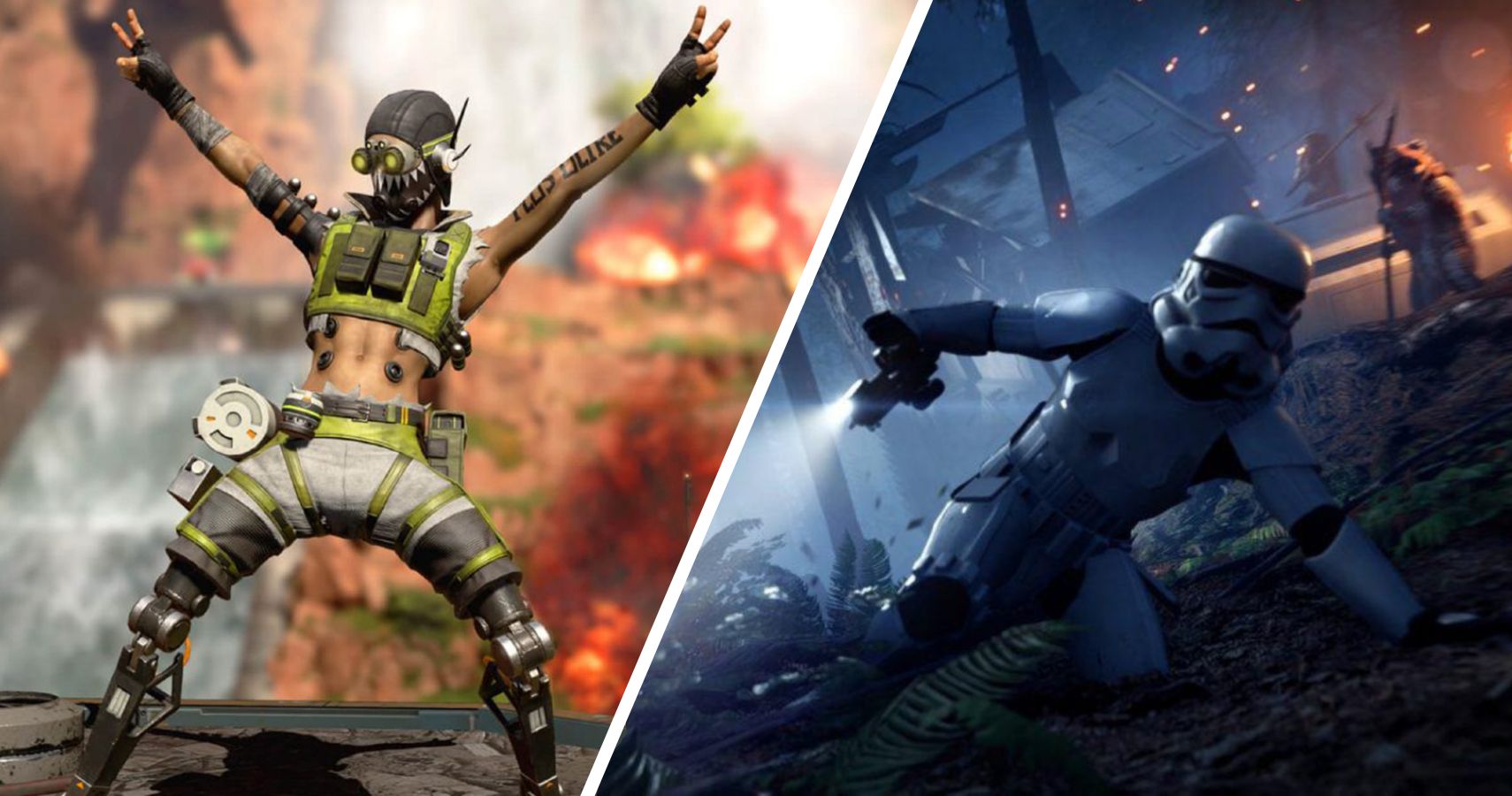 Stephanie Mazzuca is an avid reader, writer, and gamer based in Anaheim, California. As a Marketing graduate from the University of San Diego, she has worked in a variety of industries from property management to trade shows. Stephanie is a List Writer for TheGamer with a focus on sandbox/MMORPG titles. Her favorite games of all time are: Skyrim, Assassin’s Creed Odyssey, Red Dead Redemption 2, and Fallout 4.

Krafton And ESL Team Up for New PUBG Tournament Series

We Could Get More Physical 3DS Games