The Raccoon City Hospital was one of the original Resident Evil 3’s standout areas. After spending most of the game playing as Jill, control abruptly swaps over to Carlos as she gets infected by Nemesis. While the remake cuts out several key locations from the PlayStation original, Resident Evil 3 (2020) recreates the Hospital in all its horror. 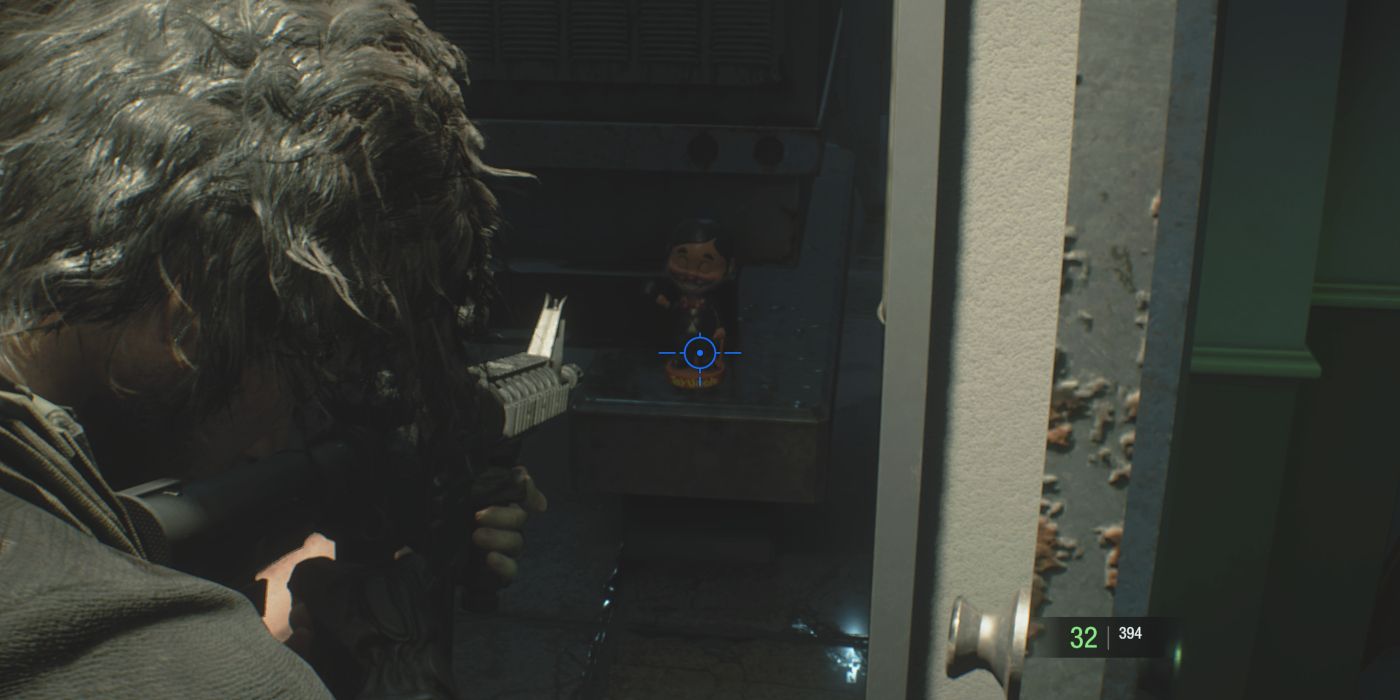 Gameplay as Carlos begins in the Makeshift Sickroom where Jill is resting up. Pick up the 20 Assault Rifle bullets and exit into the Lobby. Grab the First Aid Spray and 15 Assault Rifle bullets at the desk before entering Reception. Three zombies will be stumbling around and a fourth will break through the Main Corridor door if you approach it.

After killing the zombies, take the Main Corridor into Laboratory Reception. Carlos will be barred out of Dr. Bard’s office for the time being, so grab the Tape Player and Green Herb before entering the Emergency Entrance. This area will periodically fill with zombies over the course of Carlos’ time in the Hospital, so make sure to kill everyone lingering around.

Grab the 30 Assault Rifle bullets, break the wooden crate for 7 Handgun bullets, and follow the path towards a new part of the Main Corridor. Take the Stairwell up until it brings you to the Roof. Make note of the zombie playing dead here, but you can’t actually kill it yet. On the second floor Main Corridor, grab the Hospital map, 12 Handgun bullets, and 20 Assault Rifle bullets before hooking into the Records Room.

Getting The Locker Room Key 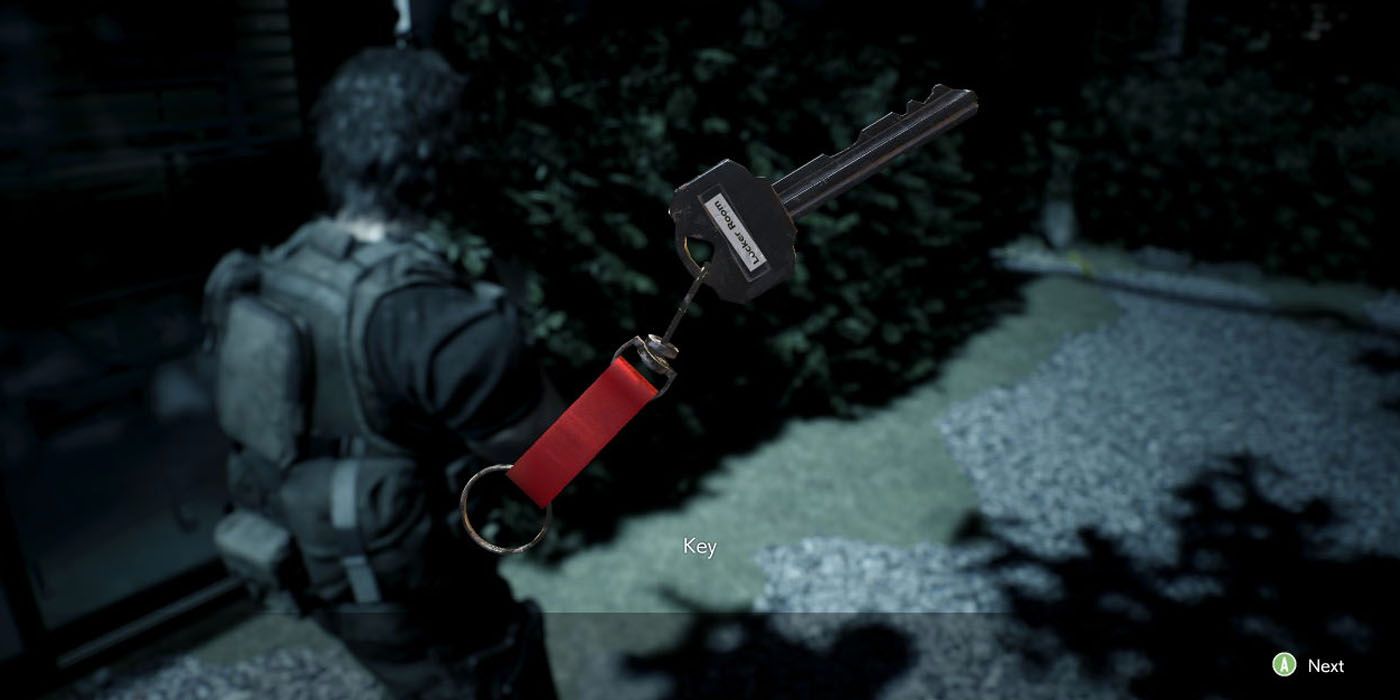 From the Records Room, pick up the 8 Handgun bullets, 20 Assault Rifle bullets, Green Herb, and rearrange your inventory at the Item Box. Back in the Main Corridor, go to the south west corner of the room and examine the broken windows. Carlos will jump down into the Courtyard below, allowing you to grab a Tactical Grip for the Assault Rifle, a Green Herb, and the Locker Room Key.

Exit the Courtyard through the opening and unlock the door back onto the first floor Main Corridor. Run back up the Stairwell and return to the Roof to see that the zombie’s now come to life. Kill them, save in the Records Room if you feel inclined, and enter the Staff Room. There are several zombies scattered about, but they’ll never aggro Carlos. Grab the 30 Assault Rifle bullets and unlock the Locker Room.

Examine the lockers in the Locker Room to find a Flash Grenade and a Hospital ID Card. As you exit the Staff Room, however, a brief cutscene will play and Carlos will be ambushed by a Hunter. Drop the Flash Grenade and start firing away at the Hunter’s head. Make sure you keep your distance, but stay on the offensive. Hunters can easily kill Carlos, so it’s best to drop them fast. 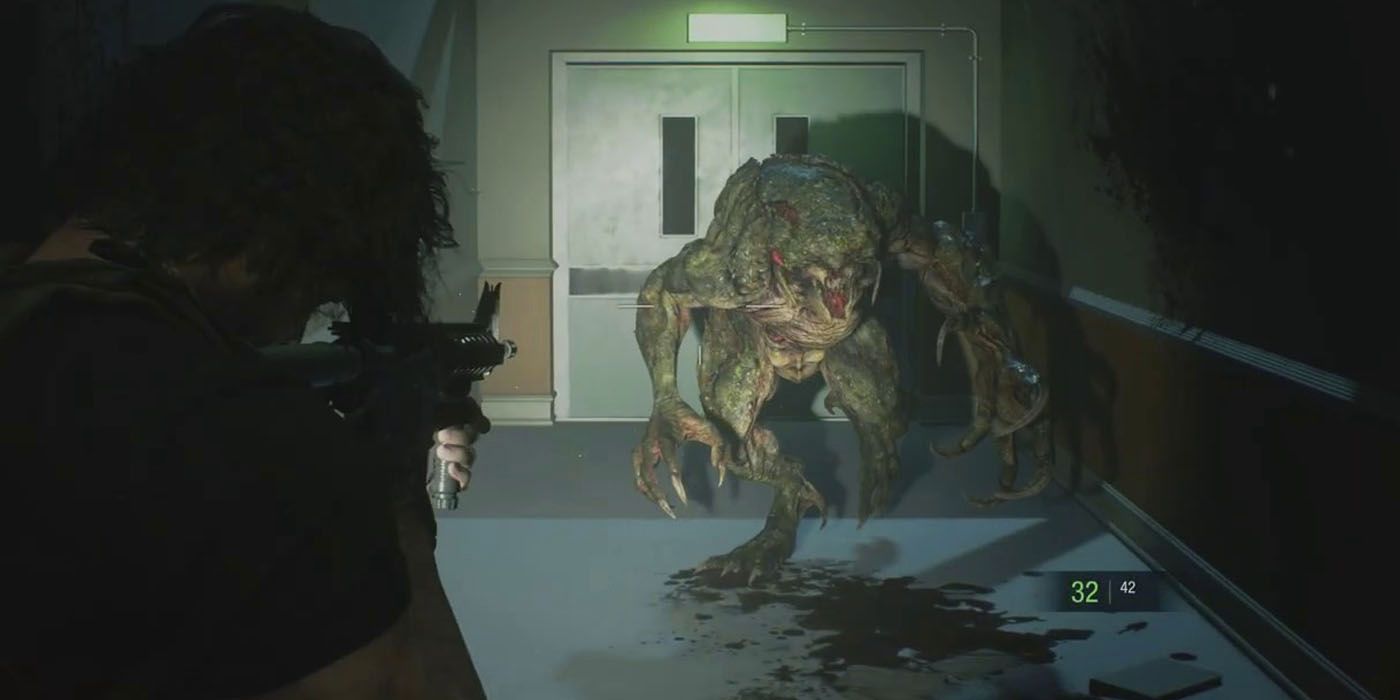 Now that Carlos has the Hospital ID Card, it’s time to clear the Hospital out of its Hunters. Head down the second floor Main Corridor into the Nurses’ Station and kill the zombie inside. Unlock the Safe (9,3) to get a Dual Magazine for the Assault Rifle and then use the Hospital ID Card on the Observation Corridor door to unlock it. At this point, three zombies will have ambushed Carlos via the Sick Room so quickly turn around and take them all out.

Once they’re dead, enter the Sick Room to find a Green Herb, 30 Assault Rifle bullets, and a Hand Grenade that’s about to be very useful. Enter the Observation Corridor and make note of the two Hunters going wild behind the glass. They can’t hurt Carlos, but you’ll need to confront them soon. Two zombies will be walking around the Linen Room, but they can be easily taken out with the Assault Rifle.

Grab a nearby Red Herb and 20 Assault Rifle bullets before facing the door into the Treatment Room. The two Hunters will aggro Carlos as soon as you open the door, but you can use this to your advantage. Open the door, throw a Grenade, and the blast should kill both Hunters before you’re in any real danger. Grab the 30 Assault Rifle bullets inside along with Recording of Dr. Brad’s voice. Another Hunter will ambush Carlos as he’s exiting through the Main Corridor, so be ready for a fight and then save up in the Records Room.

Curing Jill With The Vaccine Sample 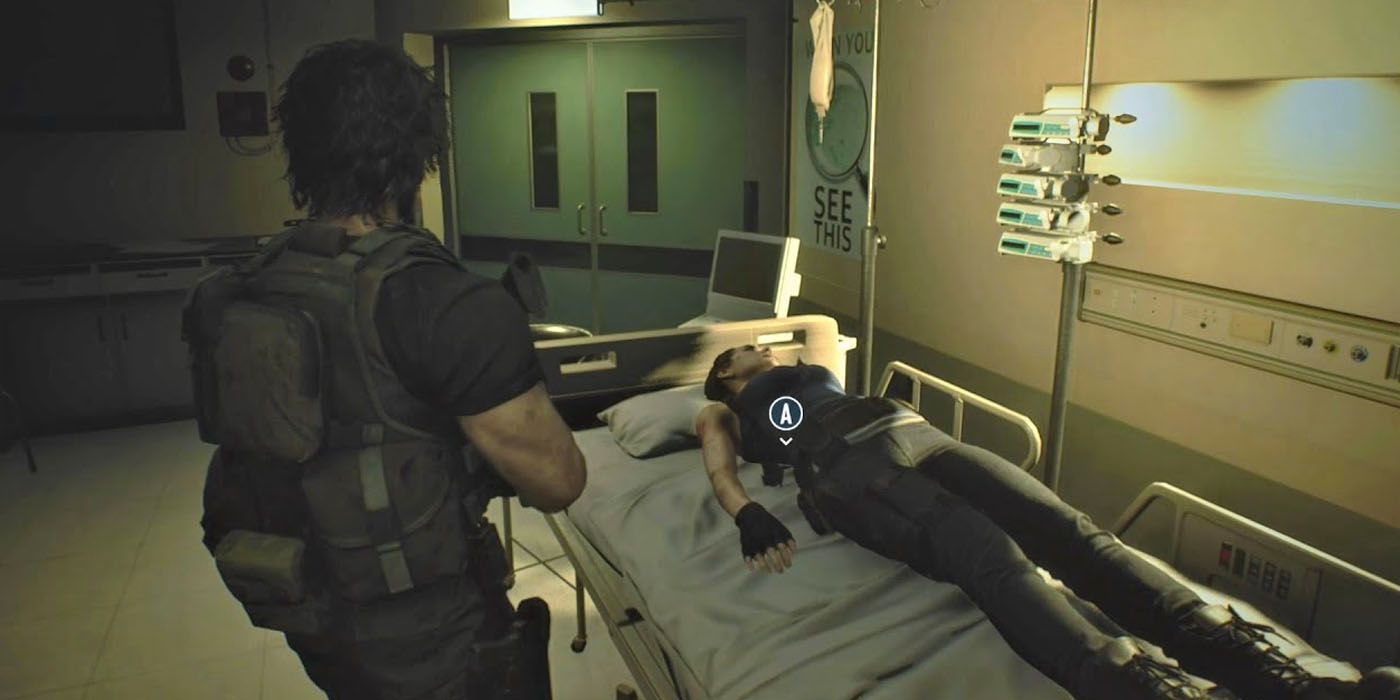 From the Records Room, cut through the Roof and exit down the Stairwell back into the Emergency Entrance. At least 5 zombies will be ready to attack Carlos, so be prepared to kill them all. Once they’re all killed, grab the 5 Handgun Bullets where the zombies were pounding from and then enter the Operating Room.

Here, you’ll find a Green Herb, 8 Handgun bullets, 60 Assault Rifle bullets, a Flash Grenade, and a Hand Grenade. Head towards Laboratory Reception and use the Tape Player to unlock the Research Laboratory. Dr. Bard will already be dead, but inside you can find 60 Assault Rifle bullets, 15 Handgun bullets, and a Green Herb. After a cutscene, Carlos will also unlock the Sample Room, allowing you to pick up the Vaccine Sample.

As Carlos exits the Research Lab, a Hunter will ambush him from the ceiling. Either take the Hunter out or book it towards Reception. Two more zombies will have come to life, but if you’re fast and know how to Quick Punch, Carlos can get past both of them without the Hunter gaining on him. Cut into the Makeshift Sickroom and give Jill the Vaccine to cure her.

Carlos Vs The Living Dead 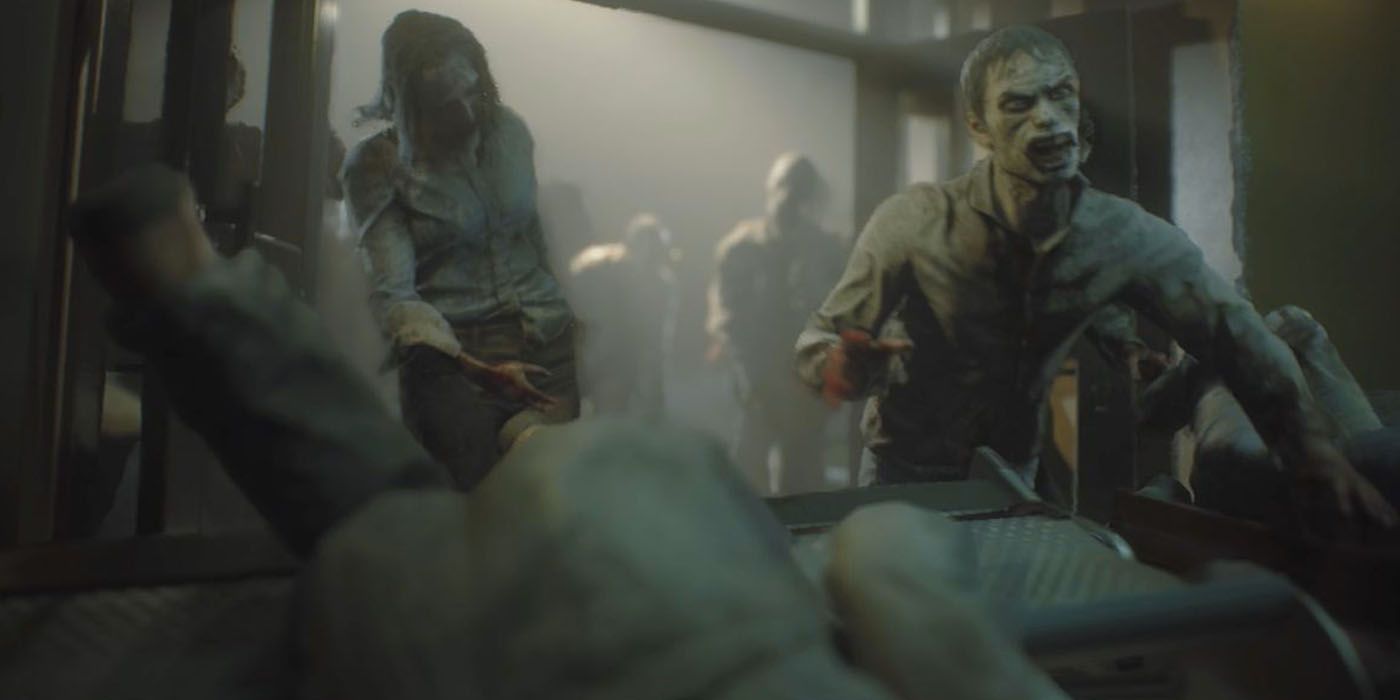 The last major stretch of the Hospital involves Carlos fighting off waves of zombies not too dissimilar to the cabin battle in Resident Evil 4. The clear difference here is that Carlos is completely alone, however. Before the battle starts, you’ll be given ample time to rearrange Carlos’ inventory and even a First Aid Spray just in case.

Make sure to grab absolutely everything Carlos can carry on his purpose. This is his last stretch of gameplay in Resident Evil 3 and his items don’t transfer over to Jill’s Item Box. If you’re running into trouble during the horde battle, the following items can be found in the arena:

The goal of the horde battle is to keep zombies away from the Makeshift Sickroom. If they break down the barrier, they’ll reach Jill and kill her – netting you a game over. You can use the nearby electrical generators to blast zombies, otherwise aim for headshots and try to kill enemies as they’re entering from the windows.

The power will go out halfway through and a Hunter will spawn, but keep strong & Carlos will eventually save the day. After surviving long enough, you’ll be able to implant a bomb onto a nearby pillar, taking out the entrance and finally ending Carlos’ playtime in Resident Evil 3.

Next: Resident Evil 3: How To Defeat Flamethrower Nemesis 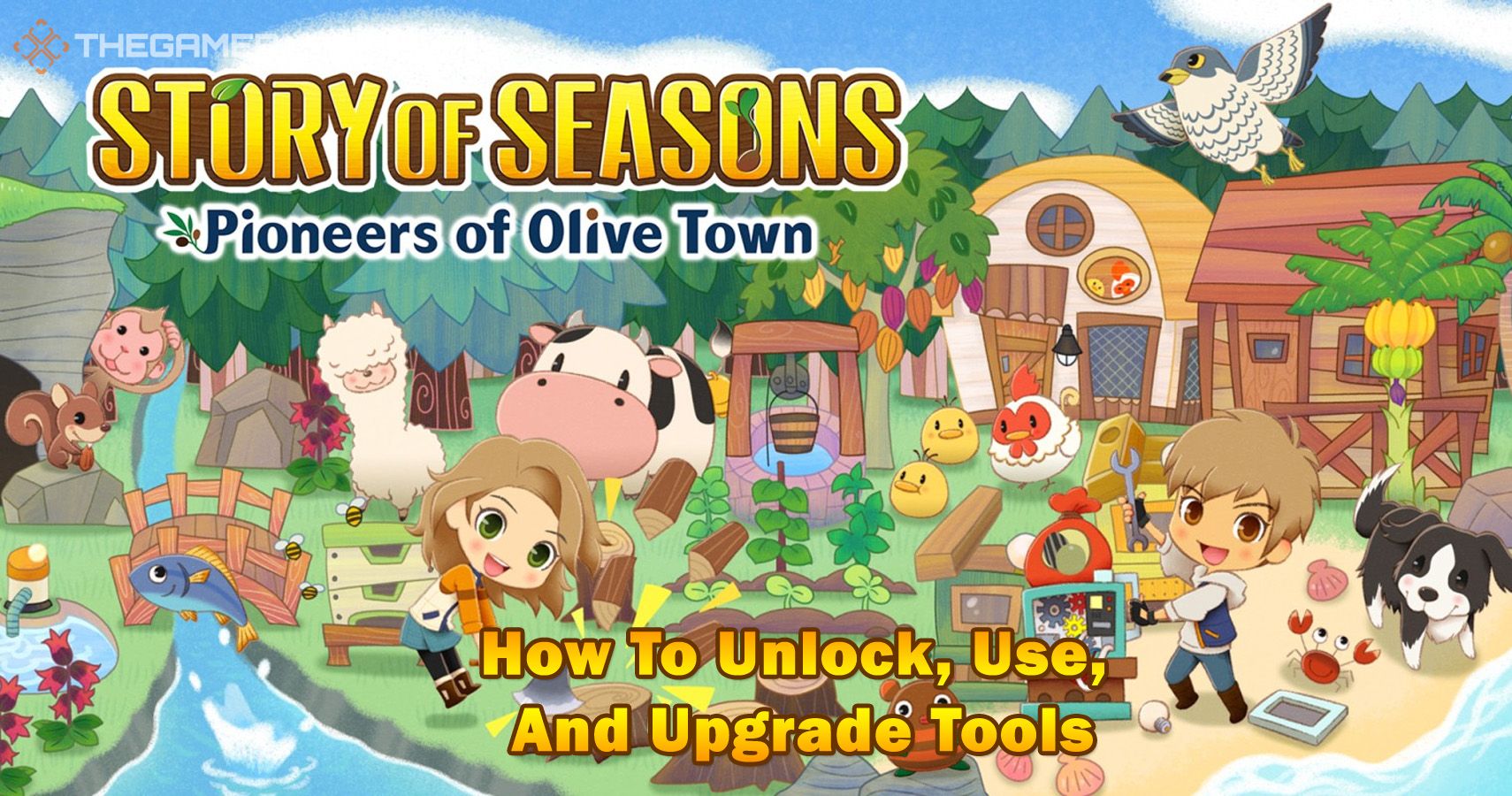 These Secretlab League Of Legends Gaming Chairs Are Gorgeous

No Bothans Died To Bring Us This Star Wars: Squadrons Ranks And Rewards Info

How I accidentally became a PC gamer – Reader’s Feature